"The Most Important Room in the World"

The unveiling of the restored UN Security Council Chamber, what's called "the most important room in the world," happened earlier this evening. Below are some photos I took and some brief explanation of the original project and the ceremony. 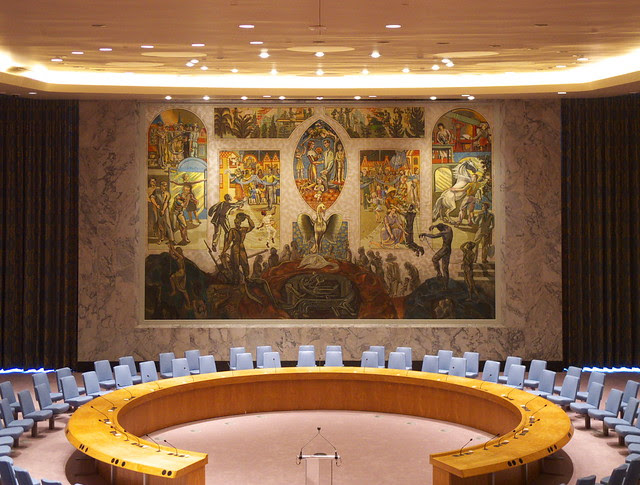 The room, situated within the United Nations Conference Building, was presented to the UN as a gift from Norway in 1952. It was designed by architect Arnstein Arneberg, though most of one's attention is drawn to Per Krohg's mural that graces the east wall and serves as a backdrop for the members seated at the circular table. 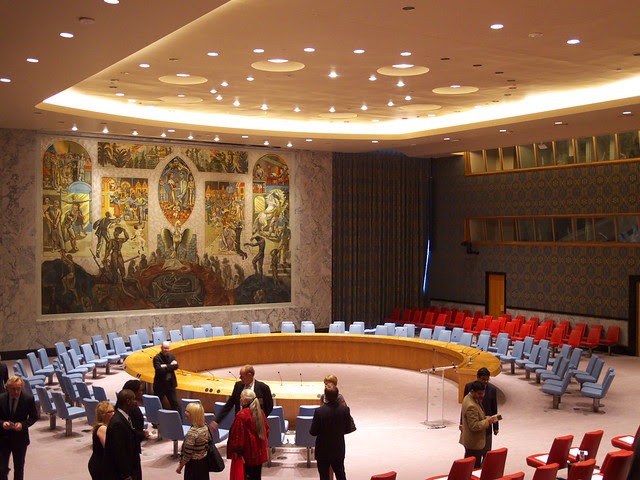 Arneberg designed the room to embody the Norwegian art and culture of the time, though he also wanted a "character so neutral that it could withstand the test of time." While hardly timeless, the combination of modern architecture, a figurative mural, modern furnishings, and richly patterned wallpaper is a successful one that manages to exude calm and respect. 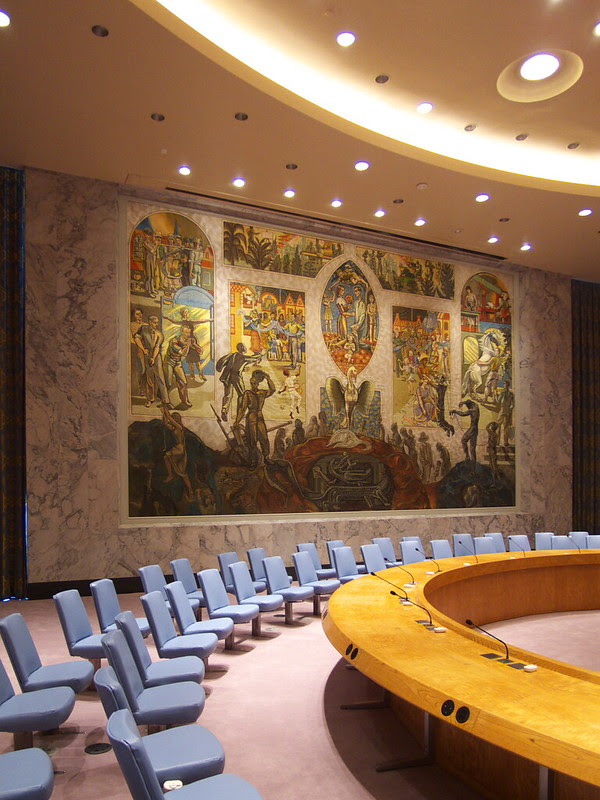 One detail pointed out both in the informative pamphlet and during the Norweigan Minister of Foreign Affairs' address is how the ashtrays (next to the microphones on the circular table, above) have been exchanged for data outlets; the detail is the same but the function under the black cover conveys the changes that have taken place in the last 60 years, or more accurately the last decade. 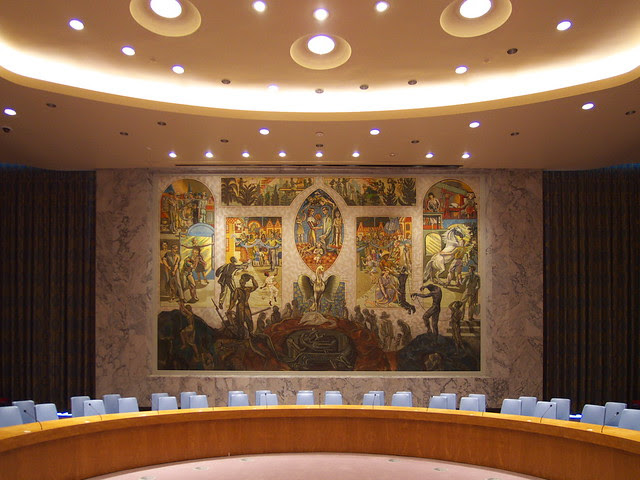 UN Secretary-General Ban Ki-moon (below) addressed the packed house, saying (I think rather nicely and accurately) that "the room speaks to us in a language of dignity." Espen Barth Eide, the Norweigan Minister of Foreign Affairs, said later that the room is "an inspiring space for carrying out the UN's core tenets of peace and security." 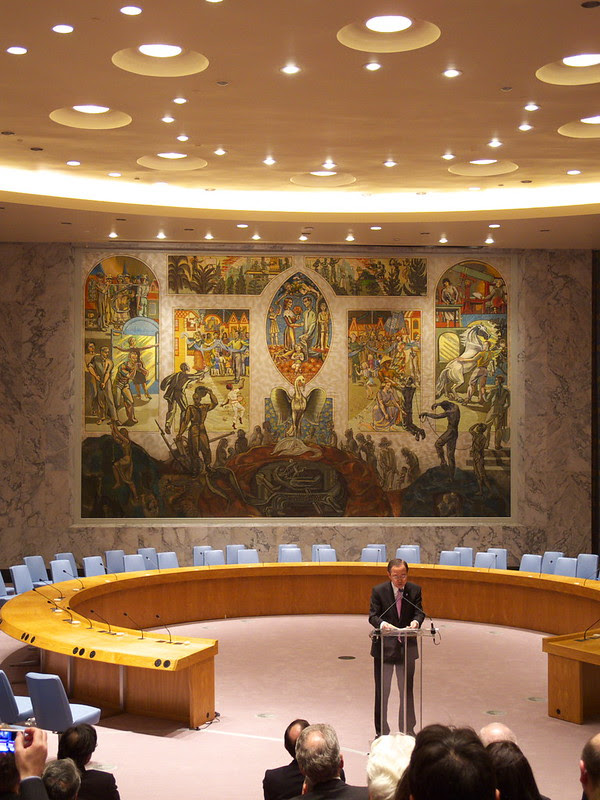 Overlooking the circular table and large mural are about 20 rows of seats, half of them fixed red seats (the same as the ones flanking the circular table, visible in the second and second-to-last photos) and half of them folding green seats (below). In this upper section of the space the Damask wallpaper designed by Norway's Else Poulsson has a really strong presence. The original wallpaper was removed and remade as part of the restoration; one piece of the old wallpaper was made into a tie and given to Ban Ki-moon as a gift. 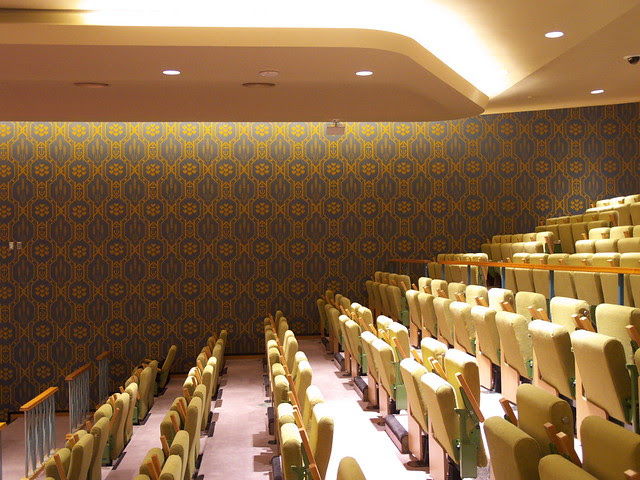 This last view of the UN Security Council Chamber shows the seats that flank the circular table. For some reason the photo does not capture the greenness of the wallpaper, but I think it reveals how the furnishings and materials manage to work together, even as the combination of modern, marble, and regular pattern blends some usually irreconcilable design features. 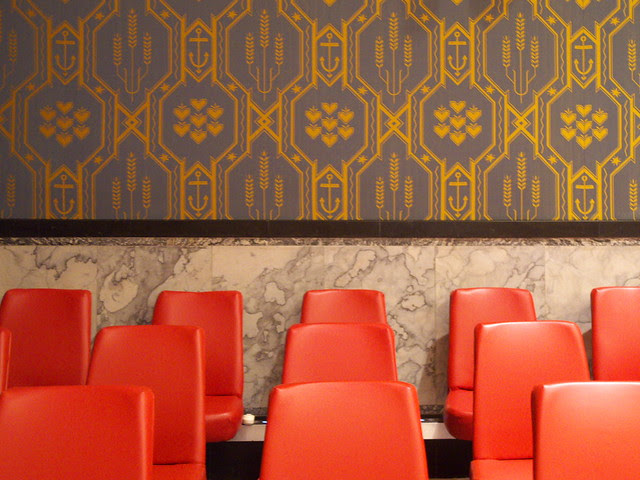 After the ceremony there were some drinks in the North Delegate's Lounge (below). I'm including this photo because it shows how many people turned out for the unveiling, and because of the view of the residential towers in Long Island City, Queens, thankfully filtered by some decorative hangings in front of the glass. 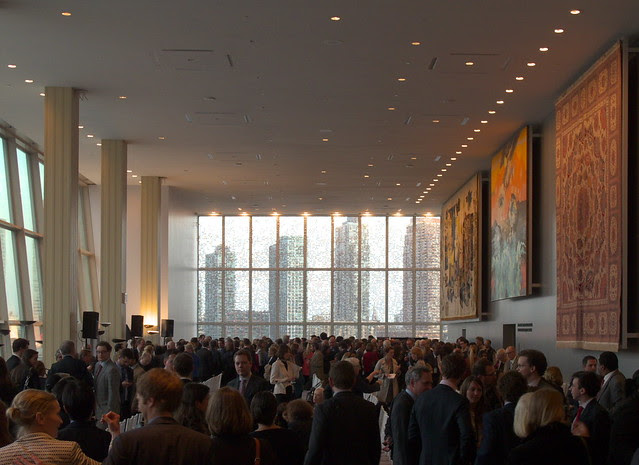