Book Review: From Camp to City 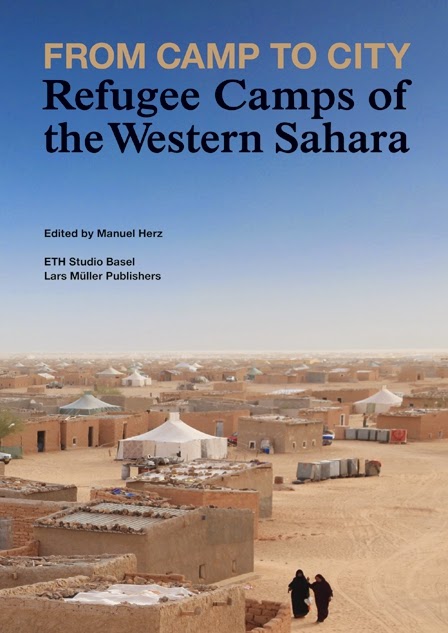 On page 185 of this excellent analysis of the refugee camps of the Sahrawi Arab Democratic Republic (SADR) in western Algeria, Mohamed Lamine, mayor of the El Aaiún camp says: "The definition of 'city' cannot be used for the camps." This statement is born of the fact that residents of El Aaiún and the five other refugee camps still utilize tents for many of their structures, but also because they see the camps as a temporary condition until they can return to the occupied Western Sahara. So stating that the camps are not cities is a political statement, yet for architect Manuel Herz and the ETH Studio Basel, headed by Jacques Herzog and Pierre de Meuron, the camps exhibit a number of urban traits that align them closer to cities, and are therefore worth studying.

This heavily illustrated book carefully documents ETH's analysis of the camps that were formed since the nomadic Sahwari population was displaced from Western Sahara by Morocco in the mid-1970s. A history of this conflict, the Western Sahara in earlier times, and of refugees around the world make up the first two chapters of the book. Here is where we start to see why the SADR refugee camps are worthy of study. Yes, it has been over 30 years since the Sahwaris have been living under conditions much different than they did traditionally (now sedentary and away from the coast), but the refugees are in a unique political situation because they administer their own schools and hospitals, have their own police force, and can monitor who is admitted to the camps. This situation is unlike camps elsewhere, where the host country controls these areas and removes most choice and control from refugees. This situation can also be seen as the main ingredients for urbanization, even as Mohamed Lamine and others don't wish to see it that way.

After a chapter on the planning of the camps of the Western Sahara, the book delves into the social aspects of Rabouni, Smara, El Aaiún, Awserd, Dakhla, and 27 February, what most of its 512 pages covers. These chapters, in the order of the book, are living, administration, moving and communication, commerce and work, health and education, and recreation and leisure. These areas are fairly logical and can find parallels in the built environment (living=houses, health=clinics and hospitals, education=schools, etc.), but the analysis has less to do with architectural design than with urban morphology and the meaning embodied in what is built and how. Those expecting to see examples of departures from the norms of refugee camps will be disappointed (unless read and examined closely, the buildings have a tendency to blur together into a sandy whole), but those wishing to learn about the place and what it says will be greatly rewarded.

Most of the documentation veers between two extremes: aerial photographs overlaid with markings to highlight certain things described in the text, and on-the-ground photographs—lots of them. There is very little visual information between these two poles, and that is a good thing, for therefore the book does not rely on abstract diagrams; it is a mix of top-down and bottom-up visuals that strike a good balance. This also means that the book reveals, when seen from above, how the camps have changed into cities (showing where camps have grown, where buildings have clustered together, and where certain types of buildings can be found); and it shows through the photos how people live (what a shop interior looks like, how goats are herded, how schools are set up, etc.). The back and forth between the two is a defining characteristic of the book and part of what makes it so successful—combined with the highly readable text—at conveying information about a place that would otherwise be overlooked.