Book Talk and Review: Lincoln Center Inside Out

On May 10, I attended a panel discussion at the Center for Architecture that followed the publication of Diller Scofidio + Renfro's account of the design and realization of Lincoln Center's transformation. This post is both a recap of that event and a review of the book celebrated that evening. 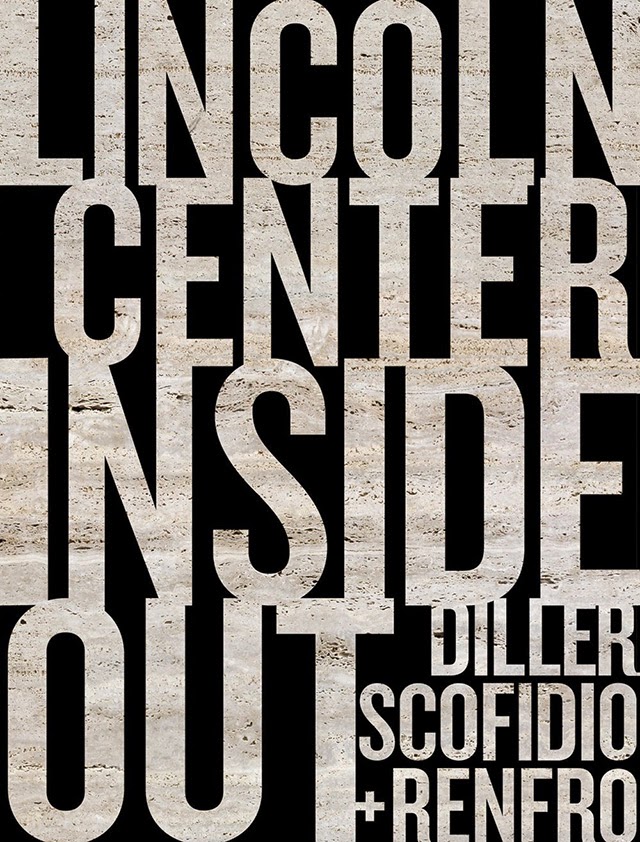 The panel consisted of five people: Elizabeth Diller and Ricardo Scofidio of DS+R; Anthony Vidler, Dean of the Irwin S. Chanin School of Architecture at the Cooper Union; Dana Polan, Professor of Cinema Studies at New York University; and moderator Edward Dimendberg, Professor of Film and Media Studies at the University of California. Dimendberg's presence allowed discussion of another book, his ten-years-in-the-making historical analysis of the firm, Architecture After Images, a book I enjoyed greatly.

Diller began the evening with a brief history of gaining the commission and of the book itself. In the case of the former she particularly praised Rebecca Robertson, former Executive Director of the Lincoln Center Development Project, for putting DS+R on the list after seeing their "Soft Sell" installation in Times Square. Bridging the project and the book was her statement that "buildings are one manifestation of architecture, books are another." With Lincoln Center, the book had to follow the project, because they were too busy during the process to work on the book, which they wrote, laid out, and even commissioned photos for, most by Iwan Baan. As we'll see, the defining characteristic of the book is how full-bleed photo-spreads alternate with gatefolds, or as Diller put it: "It's architectural porno (photos) mixed with a diary."

Dimendberg followed Diller, talking about what he discovered in the making of his book. He described both the book and the career of DS+R as narrative, something that grows from film. While Diller and Scofidio were architects on the margins when they began in the 1970s, four decades later (with partner Charles Renfro) they find themselves as architects able to maintain their integrity and be accepted as architects. This narrative arc continues post-Lincoln Center with projects in Los Angeles and Brazil moving forward.

Polan's contribution was fairly surprising and very interesting; he focused on "the theater of dining." He looked at the earlier Brasserie in the Seagram Building and the recent Lincoln Ristorante under the Illumination Lawn at Lincoln Center. Having written a book on Julia Child, and noticing how her set incorporated a dining room (a first) to link preparation and consumption/pleasure, Polan looked at each restaurant in terms of staging and visuality. For him, the Brasserie "puts objects into quotation," such as the blurring of wine bottles behind the bar. On the other hand, Lincoln Ristorante is luminous but varied, with three distinct zones and respective moods that arise from what can be seen, be it the kitchen, the bar, or the pool to the north.

Vidler analyzed the work of DS+R as a combination of two theoretical strands: program, based on John Summerson's 1957 article ("The Case for a Theory of Modern Architecture") on the architectural program as something based on science, technology, use, and nature; and image, based on Reyner Banham's writings, such as his contemporaneous take on "The New Brutalism." Like Dimendberg, Vidler finds narrative to be an important part of DS+R's work; for him, program and image are combined in unique ways through their use of narrative, of "remaking the story." 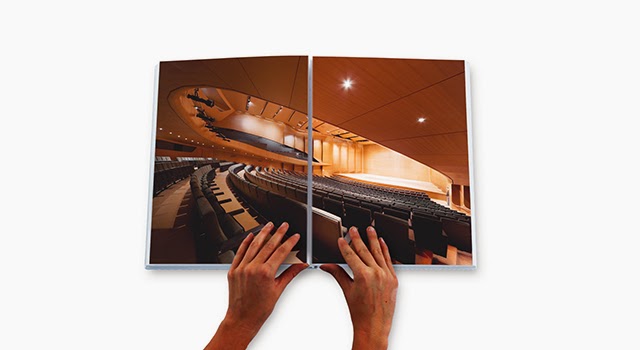 So with these thoughts from the panel discussion in mind, Lincoln Center Inside Out clearly tells a story. It is the penultimate narrative of the physical transformation of Lincoln Center, told by the architects but incorporating the myriad players into the story. (The last spread in the book is actually DS+R's "Chart of Accountability," which puts them in the middle but acknowledges the roles of every entity involved in the project.) In the most direct sense, the book tells one story in two ways (a mini-Rashomon): one through the photos and one through the gatefolds. The former is like a cursory glance at the place, akin to scanning a publication or website, while the latter is much more immersive and informative, due to the great amounts of text, drawings, and other images that lie within.

Appropriately these gatefolds remind me of DS+R's earlier book Scanning, in which many images are hidden but can be partly glimpsed through cuts in the perforated end pages. Readers can see the images in their entirety, but revealing them means defacing the book by tearing along the perforations (I've yet to do that to my copy). Lincoln Center Inside Out is not as much of a tease, but it does reconsider what a book can be through its gatefold structure. This unique approach results in an extremely rewarding book but one that made for difficulties in bookmaking; the first printing actually "did not hold," according to Diller in her talk. 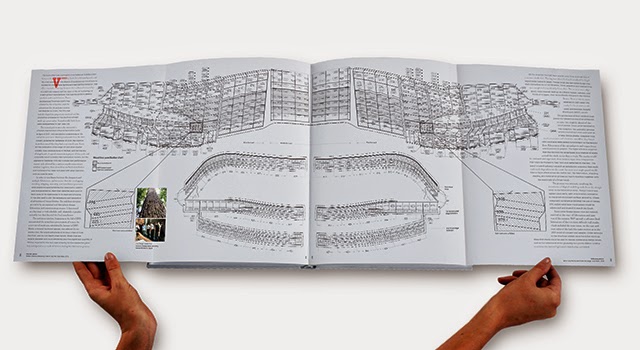 The book's arrangement happens to be both geographical and (reverse) chronological, a condition that happens due to the lack of a master plan with the project, and therefore the construction of one piece after another. As Diller described it, the "project evolved in a very organic way," where smaller ideas were executed with a shared language. In my Guide to Contemporary New York City Architecture, I describe that shared language as "peeling," but Diller defined it as a "double function" found in all parts of the project: the roof of the restaurant is also a bucolic lawn, the third-floor extension of Julliard is also a ground-floor public space, and so forth.

After some oral histories covering Lincoln Center's inception and campus plan, the book moves onto a chapter on the bigger picture of transforming Lincoln Center, highlighted by a slideshow recounting DS+R's interview process. The chapters that follow focus on the Columbus Avenue Entrance, the North Plaza, the Street of the Arts, Julliard School, Alice Tully Hall, and the School of American Ballet, in that order.

The best parts of the book are definitely the gatefolds, as most of them are self-contained narrative details about the project. As Dimendberg noted, reading one gatefold each night before bed is a good way of taking in the book. The contents of each gatefold are unique, but in general they describe how some aspect of the project came into being and then document it in fine detail. For example, the gatefold devoted to the LED steps at Columbus Avenue addresses the oft-heard question of "How do I get to Lincoln Center?" (even as people were standing across the street from it, per the text), then delves into how the risers are detailed and how the lighting runs work. The most gatefolds are devoted to Alice Tully Hall, what Diller described as a project in its own right.

Not every piece of architecture deserves such a thorough and elaborate treatment, but it is definitely appropriate for Lincoln Center, given the scale and complexity of the undertaking, the modernist canvas on which the changes took place, and DS+R's creativity in making the place inviting to the public. Of course, it would not be enough for DS+R to publish just another book on a project, hence the innovative gatefold structure. In revealing what was hidden inside the guise of a coffee table book, Lincoln Center Inside Out parallels the project's double function, making it a joy to discover the changes that have take place over the last decade.