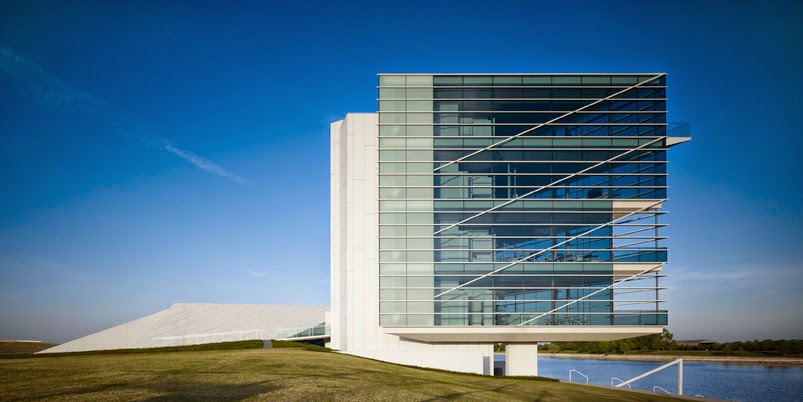 All photographs are by Scott McDonald/Hedrich Blessing, courtesy of Elliott + Associates Architects.

While formed less than 25 years ago, Chesapeake Energy bills itself today as "the second-largest producer of natural gas, 11th largest producer of oil and natural gas liquids and the most active driller of new wells in the U.S." (Texas's ExxonMobil is the one ahead of Chesapeake in the first case.) The company is headquartered in Oklahoma City and is in the midst of adding considerably to their 111-acre (45-hectare) campus north of downtown, just off of I-44. Each building on the new campus has been designed by Elliott + Associates Architecture, also based in Oklahoma City; three of those buildings are discussed here as well as a building on the banks of the Oklahoma River closer to downtown. 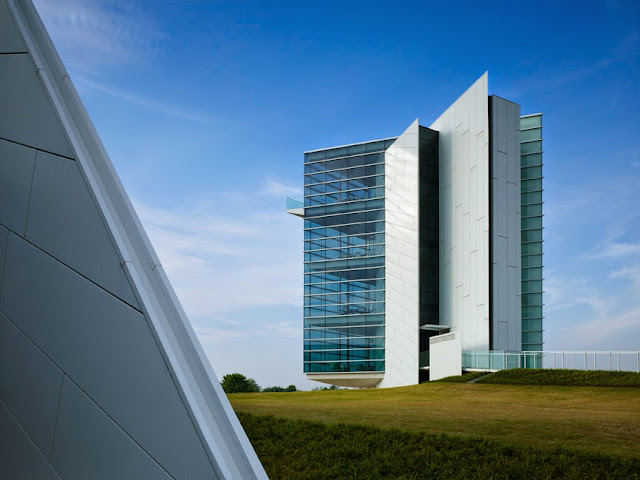 The Chesapeake Finish Line Tower is a project of both Chesapeake Energy and the Oklahoma City Boathouse Foundation; basically the former gave money to support the latter's focus on using the river for recreation and competitions to make "a stronger, healthier community." The foundation's goal has involved the construction of eight buildings for storing boats and providing facilities and amenities, with two more in planning. The tower is their third building, and it is the third for the foundation designed by Rand Elliott's firm. The 4-story, 7,100-sf (660-sm) tower provides a welcome center on the first floor, a space for the finish line jury one floor above, a media room on the third floor, and a VIP viewing gallery on the top floor. The glass prow of the tapered building allows for full views of the river, particularly when the glazing at the corner retracts. 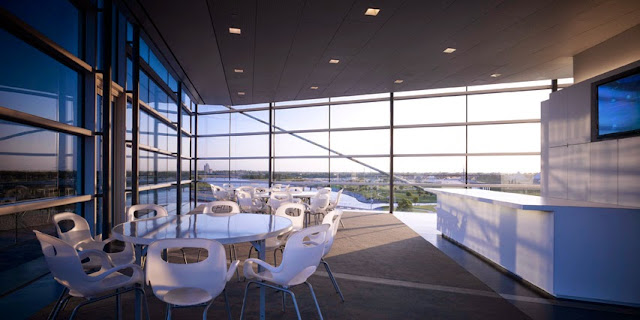 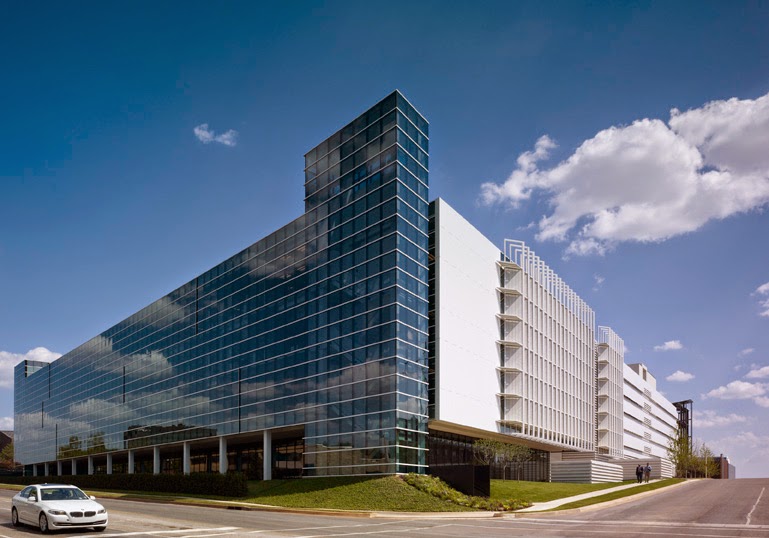 The Chesapeake Finish Line Tower was completed in July 2011, the same month as the next two projects: Chesapeake Building 13 and Chesapeake Car Park One. Both can be seen in the photo above, with Building 13 in the foreground. As can be seen in the aerial at bottom, this 130,000-sf (12,000-sm) office building is triangular in plan, while the larger parking structure that links to it by bridges is a rectangle just south of it. The north-facing glass wall defines the north edge of the campus and presents outsiders with a contrast between the modern expansion and Chesapeake's neo-Georgian campus across the street to the west.

Elliott followed the client's existing 52-foot module for offices, resulting in a central atrium that is highlighted by dichroic glass panels hanging in the triangular space. What really conveys the logic of the module intersecting the tapered triangle of the site is the view of the corridors from the "tip" at the building's eastern end. This point is accentuated through two panes of backlit glass. 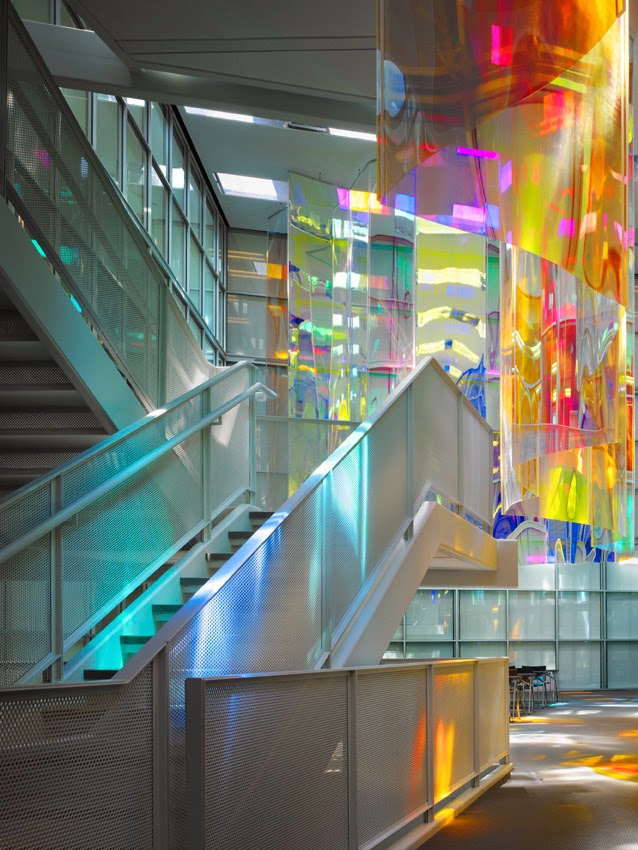 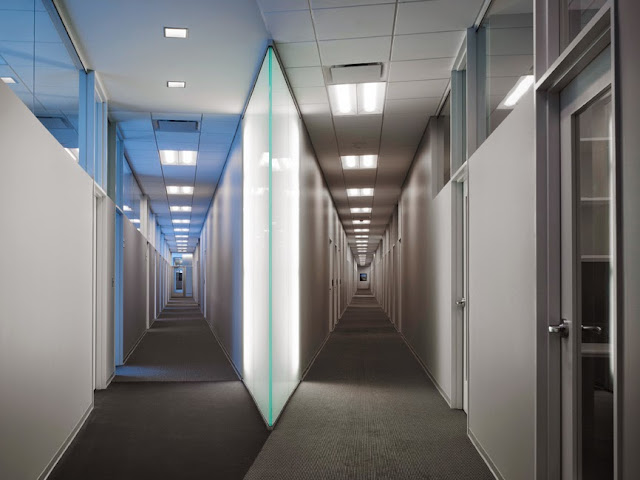 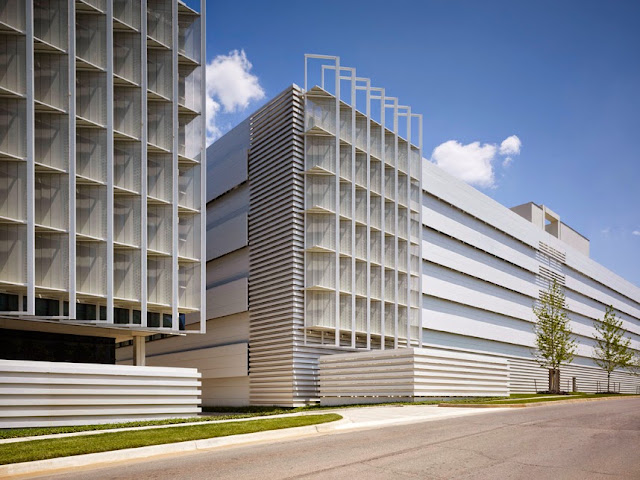 With a single architect and simultaneous construction of the two buildings, some elements are shared between the office building and the car park. Most notable is an armature with angled screens that blocks afternoon sunlight—more important in the office building but used on both as a formal link. The majority of Car Park One is covered with staggered metal panels that allow natural ventilation but not views of the cars. Without any exterior lighting, strips of light illuminate the building at night, as artificial light from inside leaks through the gaps.

Given that the most common saying after parking a car in a garage is "remember where we parked," wayfinding is particularly important. The large, 4-aisled footprint of this garage on 5 levels (850 spaces total) means this is important, even though most drivers will be using the garage day after day as employees of Chesapeake Energy. Elliott uses color to help people locate what level they parked on; through paint, lighting, and graphics. The central, east-west axis that cuts through the building is particularly memorable for the use of Dan Flavin-like fluorescent strips of light and the way the colored bands of light overlap with the angled floors (a section occurrence of the angled plan intersection in Building 13). 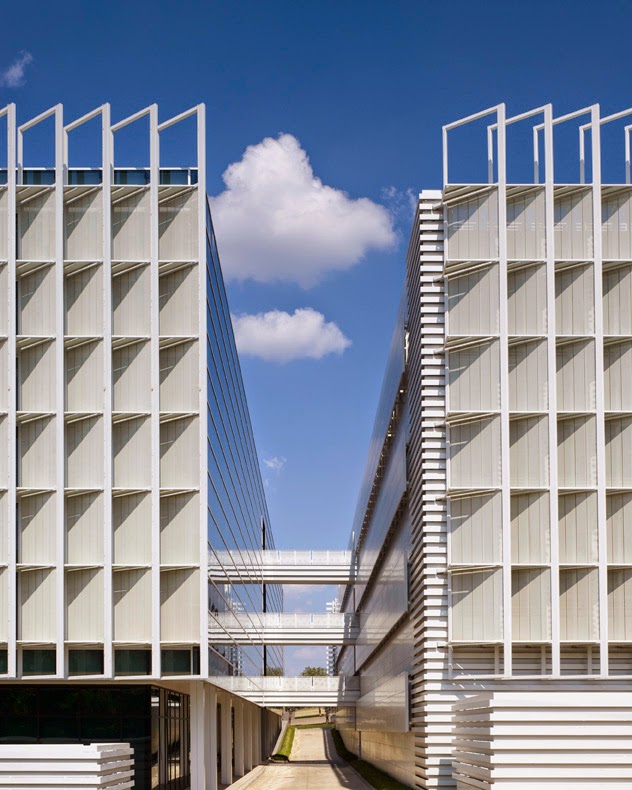 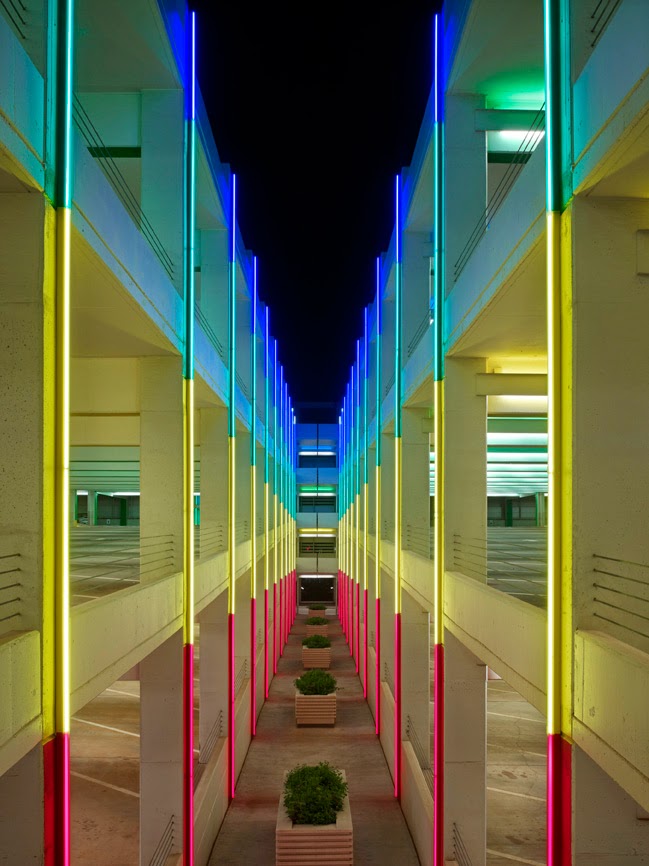 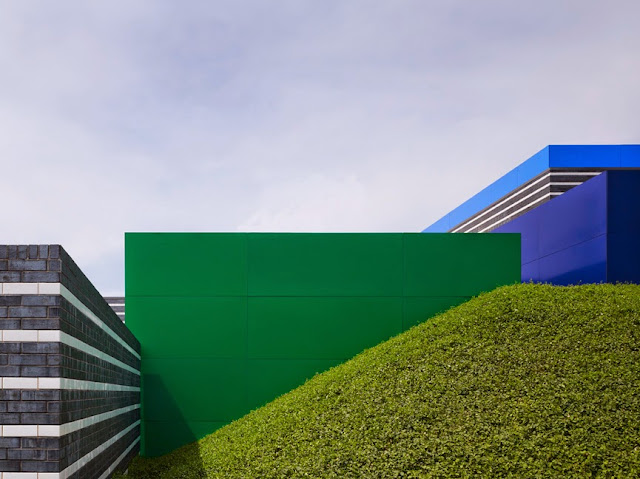 In the middle of the campus expansion's many blocks being taken over by office buildings and parking garages is the Chesapeake Child Development Center, a 60,000-sf (5,575-sm) building that serves the children of the company's approximately 12,500 employees. The general footprint can be grasped in the aerial at bottom: classrooms, offices, a kitchen, playroom, and other spaces are located in four rectangular volumes that branch off of a central east-west circulation spine. This layout allows secure courtyards to be created between the volumes.

Like the parking structure—and appropriate to childhood learning—color is used predominantly and strategically. Even as the exterior is made up of primarily gray and white bricks, splashes of color (especially in mechanical enclosures on the roof) hint at the saturated interior. In the case of the main corridor, the yellow from the floor and wall colors the ceiling and the brick wall that link inside and outside. Light tubes help to fill the spine with natural light and "spray circles of light on the walls and floor," what Rand Elliott admits is his favorite detail in the building. 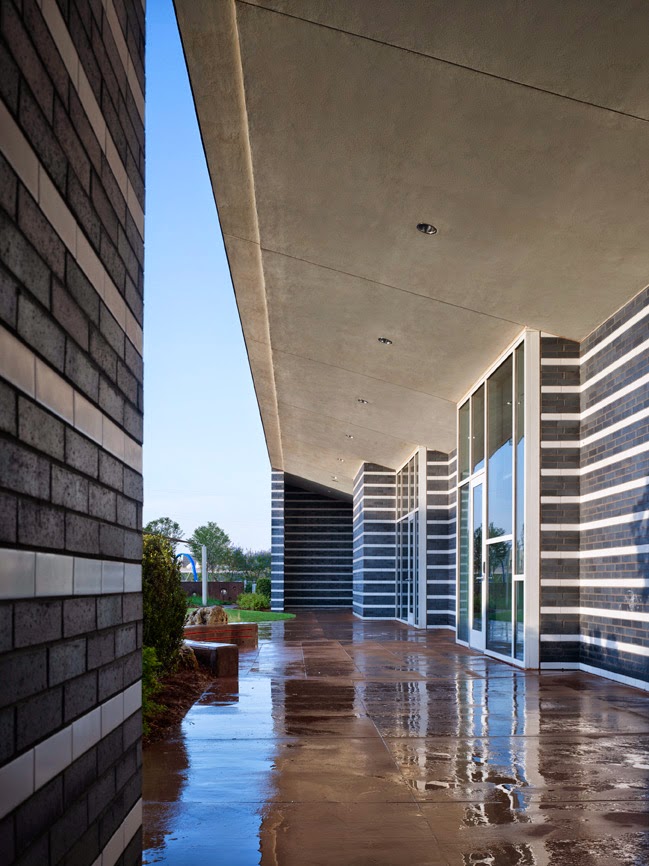 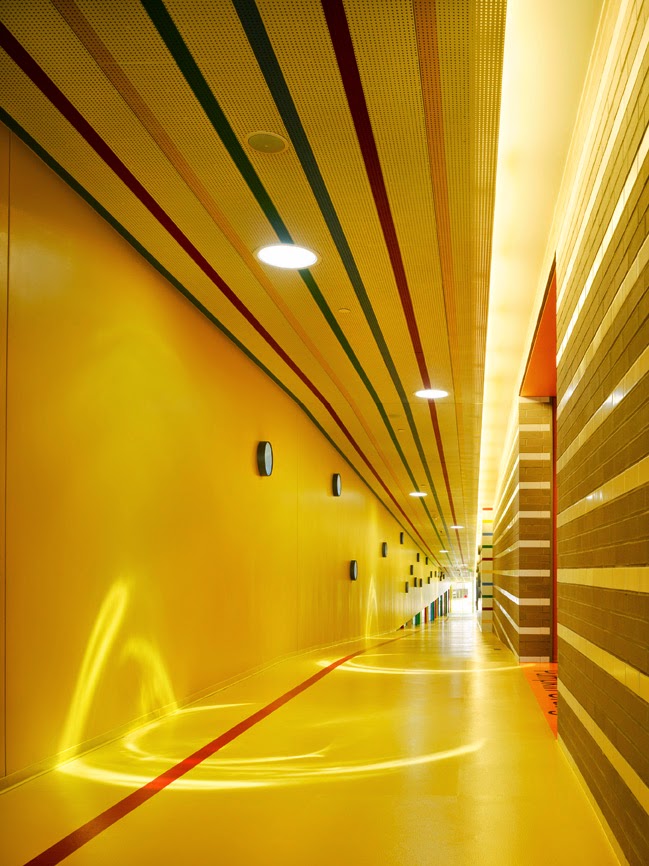