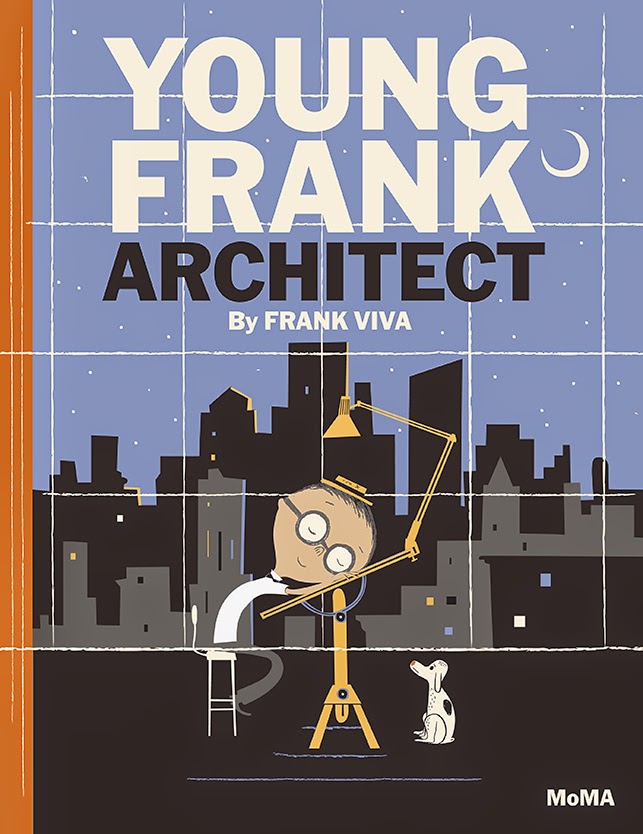 Billed as "MoMA’s first storybook for kids ages three to eight," Young Frank, Architect tells the story of two architects name Frank, one young and one old. No, it's not a time-capsule portrayal of Frank Gehry and Frank Lloyd Wright (though they do make appearances in the book), but two generations of one family—a boy and his grandfather.

Like a lot of children's stories, this one embraces being different, saying it's okay to build chairs out of toilet paper tubes and make skyscrapers wiggle. These are the things young Frank wants to do but old Frank tells him it's not right. MoMA validates the former's wishes when, on a visit to the museum, they see how the Franks, Gehry in particular, actually designed paper chairs and wiggly towers. Back home, Frank and his grandfather embrace the lessons they learned and together design whimsical chairs, towers, and eventually a whole city. 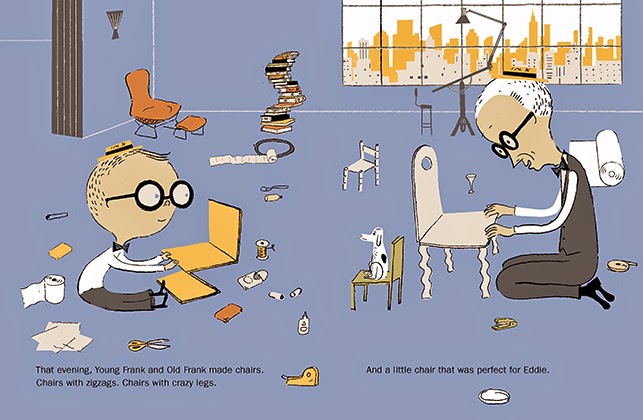 I could talk about the drawing style, the way the story is a vehicle for MoMA, or how well the story conveys educational concepts for the age 3-8 range, but it seems more fitting to describe how my 5-year-old daughter liked the book. At first averse to reading it as a bedtime story (she thought the cover looked dark and boring), her attention was rapt on the story as I read it last week. This could stem from that being our first read through the book, but the short text and large illustrations that tell much of the story certainly did their part to draw her into it.

Her favorite parts involved Eddie the dog, a bystander for much of the book but also a participant. He can be found on each spread (outside of those taking place at MoMA, of course), almost a stand-in for the child reading the book about the two Franks. Spotting Eddie and seeing what he's up to was fun for my daughter, as was discussing the creations that young and old Frank make together in the last part of the book. It's only a matter of time (a couple more reads, I presume) before my daughter will be gluing our old paper towel tubes into coat racks and stacking my books into wiggly towers for her stuffed animals to climb upon. If so, MoMA will have done its job.