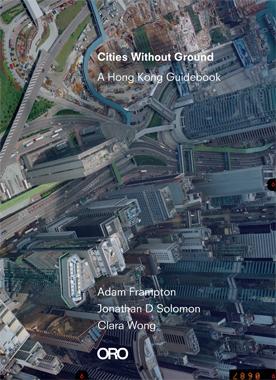 Think "guidebook" and most likely photos and descriptions highlighting particular objects—be they buildings, sculptures, parks, or even neighborhoods—comes to mind. But these entities are never separate from what is around them, a fact especially pronounced in cities, where new and old architecture, public art, and landscapes partake in almost constant negotiations with their surroundings. Then there are the networks—usually streets but comprising many more conduits in this age of infrastructure and flows—and this guide to Hong Kong, a "city without ground," is unique in this regard, for it focuses on the above- and below-grade walkways that traverse large sections of the city. 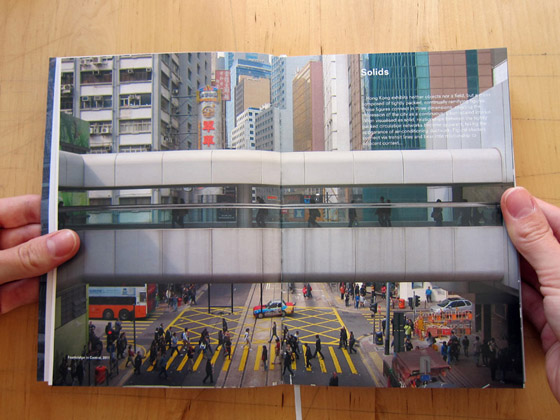 So given the carefully honed subject of the guidebook, the question is "how are the walkways presented?" Photographs, like the elevated walkway above, hardly do justice to the complicated network that winds its way between, above, below, and sometimes within buildings. So exploded axonometric drawings, as shown below, are used to describe the walkway networks in various fragments throughout the city. Buildings are ghosted and the vertical dimensions are exaggerated, both aiding the clarity of the diagrams. 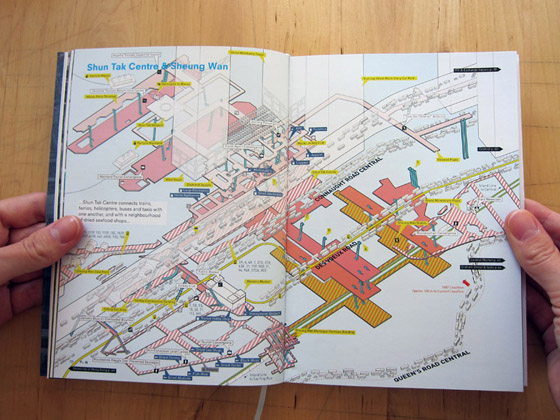 Given the complexity of the routes, and therefore the concomitant complexity of their representations, it's fruitless for the reader to try to understand every map in its entirety. Aiding one's reading of the diagrams are the numerous notes (shops, restrooms, bus stops, etc.) and activities (gambling, fishing spot, drunken expat, and men with bird cages, to hint at the variety). The latter is a particularly important part of the book, because it inserts the observations of the authors and their compatriots that helped make the book into the mix; and because it enables the reader to fictionalize and even personalize places and routes.

After all, is there a big difference between a map labelled with an important event (Mr. X was born/died here; the Battle of X occurred here; etc.) and one marking a relatively unimportant but potentially exotic occurrence? In reality yes, but in the realm of maps, not really. Both the important and the mundane exploit the conventions of maps and help people to remember something by locating it in space. In the case of Cities Without Ground, I like the idea (especially having never visited Hong Kong) of taking a virtual stroll around Shun Tak Centre and Sheung Wan, for example, watching the tourists come and go from the casinos, then jostling past other passengers as I make my way to the Fabric Bazaar, passing "Save the Children" activists and a giant newscast on the way. It's a walk in my imagination, but one I wouldn't have taken otherwise without this guidebook.