A House for Pink Floyd 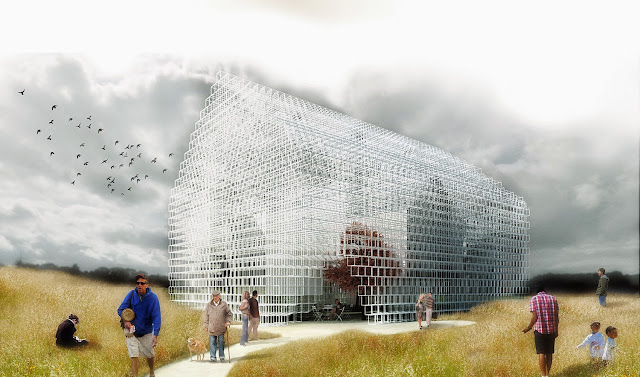 A House for Pink Floyd by arqbauraum, 2013

The following text and images are courtesy of Susana dos Santos, José Pedro Azevedo and Nuno Cabanal (arqbauraum) for  their entry in the ICARCH Competition "A House for Pink Floyd."

“Much of the modern movement has drawn the intellect and the sight, but left aside the human body and its sensations […] – but also left the memories and the dreams dislodged.” - Juhani Pallasmaa

The work is based on Man meeting with himself and does so through the senses.

Actual architecture has the ease of technological advances that everyday flood the offices with new materials. However all these amenities have achieved are for buildings to be deprived of presence, making them the fruit of unbridled consumption, of the ostentation and many times from the creator's Ego. Today architecture is endowed with a star system that dictates the trends as the world finds itself grappling with political crises and austerity. All these components have assembled an explosive cocktail when we look at the landscape of cities only to realize that the concept of "inhabit" is degraded.

With this work we aim to give back to Man, in any place of the World – squares, gardens, glades, parking lots from big malls, etc. – the right to inhabit the planet without stratifications of any kind.

We have done it by going back to the children's imaginary to the age of dreams and curiosity, and in a simple and pure way we have created a multitude of spaces that enable each one, in a singular way, to be and to think.

To the image of the ordinary house we subtract its mass as an allegory to the present and to the reality we now live in; because both rely on the way we gaze and feel them. It's also a symbol of change because the absence of mass gives it a building-site character and also a lightness that emerges to oppose the image of concrete boxes.

Within the space of the house we've laid out five boxes made of white concrete in the exterior and black in the interior to keep the game of oppositions.

We wander through a synesthetic route that begins from north and ends at Nascent. Through it we primarily find the purification volume that intends to raise our vision and auditory senses.

In the following box we find the shadows that symbolize the air. Its aim is for the individual to question the visually perceptible truth and also for the visual experience to assume tactile characteristics – feeling with the hand the form is "observed."

Through the pathways between the boxes we are in the constant presence of the soil, the nature, the use of the sense of smell that refers to memories and the quest of Man through glades that were created from the subtraction of the total volume.

In a third moment the visitor is confronted with the light that symbolizes fire and the sense of feeling through the skin.

After reestablishing the equilibrium of the senses and the opening of the soul and the mind, we find the last two spaces. One is a space with books and the other with dialog, music and exchange for the house of Pink Floyd is what each and every one of us wants it to be.

With this project we wish to return to Man a place for him to pulse with the World, a space that appealed to solidarity and to the strength of the use of words. 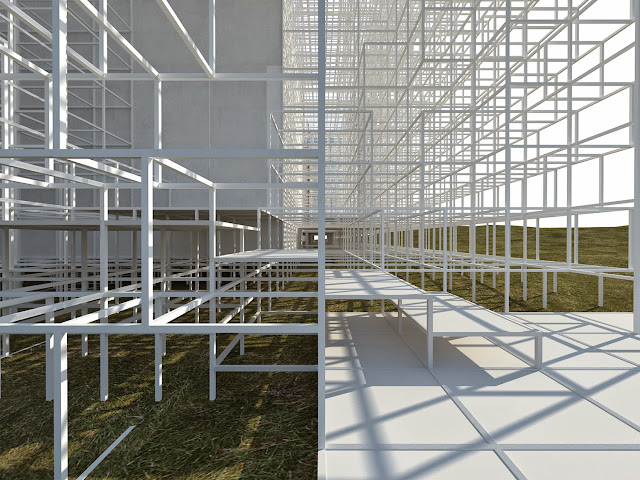 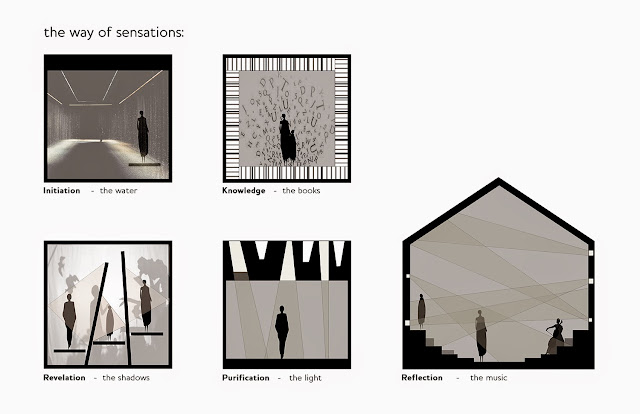 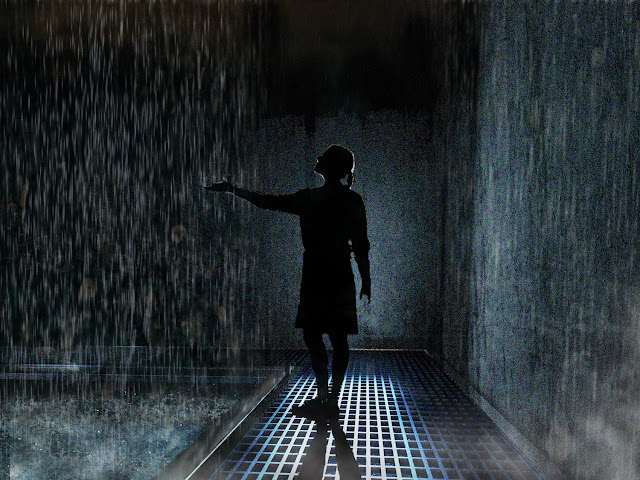 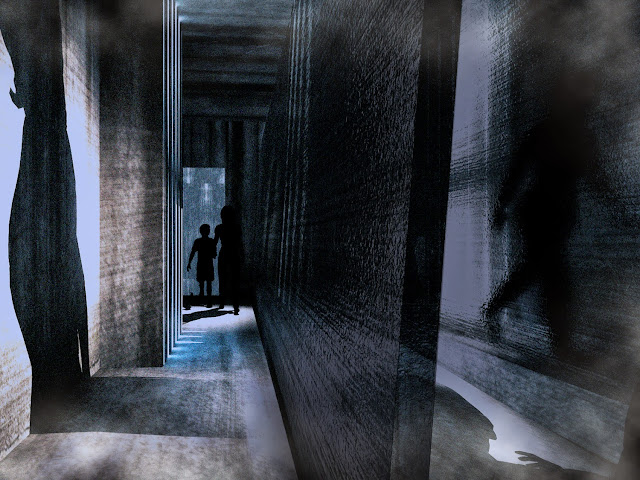 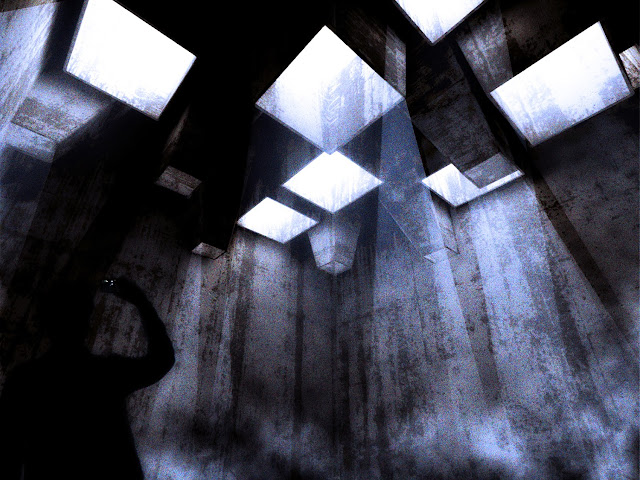 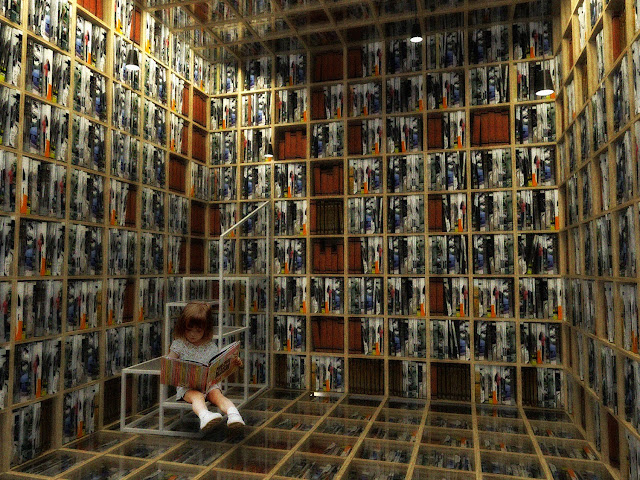 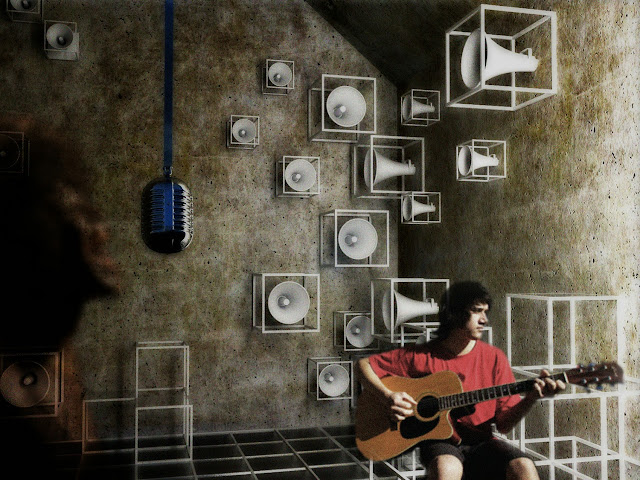 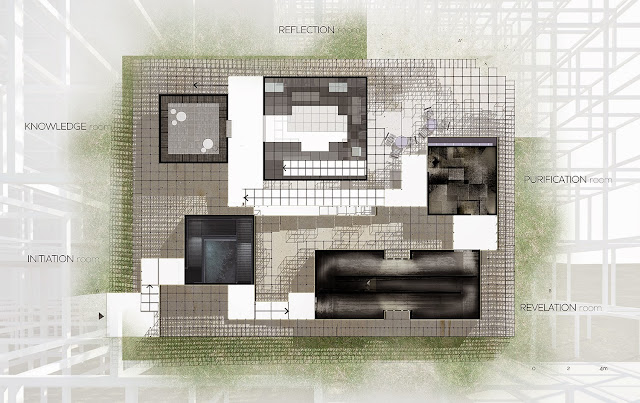