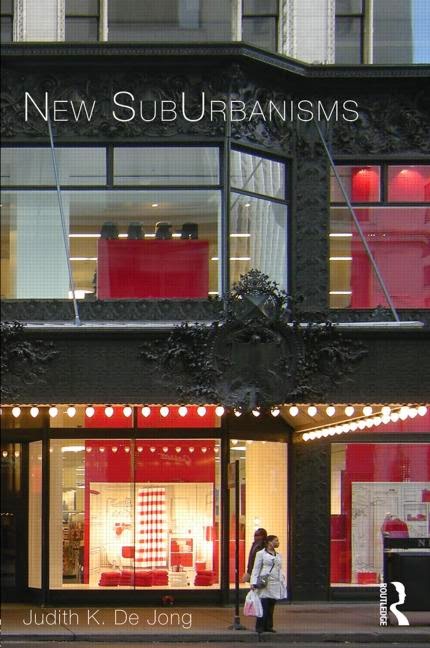 Back in August I attended a book talk by Vishaan Chakrabarti on his book A Country of Cities. In both the talk and book the former NYC planner and current SHoP partner spells out his argument for density, envisioning for the United States what the title clearly states. Implicit within this hypothetical yet potentially great migration from rural and suburban areas to cities is the distinction between the former and the latter. For Chakrabarti cities are defined as places with a high enough population density for subways, something not many U.S. cities can boast of, much less their suburbs. A different tack is taken by Chicago-based architect and UIC assistant professor Judith De Jong in New SubUrbanisms, where she sees a "flattening" of the long-held distinctions between cities and suburbs, and she calls for creative responses to this condition. Compared to Chakrabarti's book, De Jong's approach is certainly more practical, even as it calls for a move away from "business as usual" approaches in metropolitan areas.

What De Jong calls flattening and defines as "suburbs becoming more similar to their central cities, and cities more similar to their suburbs," is investigated through a mix of firsthand accounts in primarily two cities (Houston and Chicago, where she has spent a good chunk of her career) and loads of demographic data; some of the latter is illustrated but most of it is found within the text to convey the extent of flattening while arguing for architects and urban designers to address it accordingly. The firsthand accounts consist of buildings and public spaces that serve as examples of the urban infiltrating the suburban, and vice-versa. These examples fall into five categories, each given a chapter: car space, domestic space, public space, retail space, and mix and match.

A couple projects, in the domestic space chapter, should serve to elucidate De Jong's stance. She discusses the ongoing Lakeshore East development in Chicago as "reflective of the ongoing hybridization between urban and suburban in contemporary inner city developments," while Optima Old Orchard Woods in Skokie, about 20 miles north of Chicago, is indicative of "suburban municipalities with urbanizing characteristics," namely proximity to transportation and retail developments. Lakeshore East is primarily residential towers around a park (the most notable tower is Studio Gang's Aqua hotel/residential high-rise), but its more traditionally suburban aspects include large unit sizes (preferring families over singles and couples) and townhouses that directly front the park and shield parking on the rear. Similarly, Old Orchard Woods provides plenty of parking below the mid-rise buildings with fairly large apartments.

So both Lakeshore East and Old Orchard Woods exhibits traits of their context but also the other – they are urban and suburban at the same time: sub/urban. But De Jong does not see this as a brand new, contemporary condition; the histories she provides as a framework for her argument in the first chapter, and in places throughout the other chapters, are some of the strongest parts of the book. In the case of these domestic spaces, and Lakeshore East in particular, she sees Bertrand Goldberg's Marina City as a precedent for adding residential density to the city while providing something required in the suburbs: a place for the car. Ironically, the mix of residential, commercial, retail and entertainment in Marina City meant residents could live day to day without ever leaving their city block. But the parking podium that raised those same units higher into the sky meant they could come and go (to the suburbs, if they liked and now might in the case of reverse commuting) via car just as easily.

Those following urban studies and urban design will not be surprised by the effects of flattening, which are apparent in the form of buildings in cities and suburbs but also in the codes that dictate, for examples, a certain number of parking spaces per residential unit in inner cities (an impediment to truly walkable/bikeable cities). But De Jong's embrace of flattening through creative architecture ekes out a unique spot in the myriad of literature on urbanism – sitting somewhere between Chakrabarti's siren song for the city and the call of June Williamson and Ellen Dunham-Jones to retrofit suburbia.
De Jong gives people a vocabulary for the conditions of sub/urban flattening (such as the four types of parking: surface, layer, lift and mix, and fill) while spurring them to think beyond those for new ways of intervening. And while the author's entry (with David Ruffing) for the Build a Better Burb competition (selected as a "noteworthy scheme" and part of the book Designing Suburban Futures) is included at the end of the book as an example of hybridizing the sub/urban context, New SubUrbanisms could have used more projects that illustrate the creative potential for responding to flattening. Yet this is only one flaw in a well researched and highly readable book on one part of the American condition today.