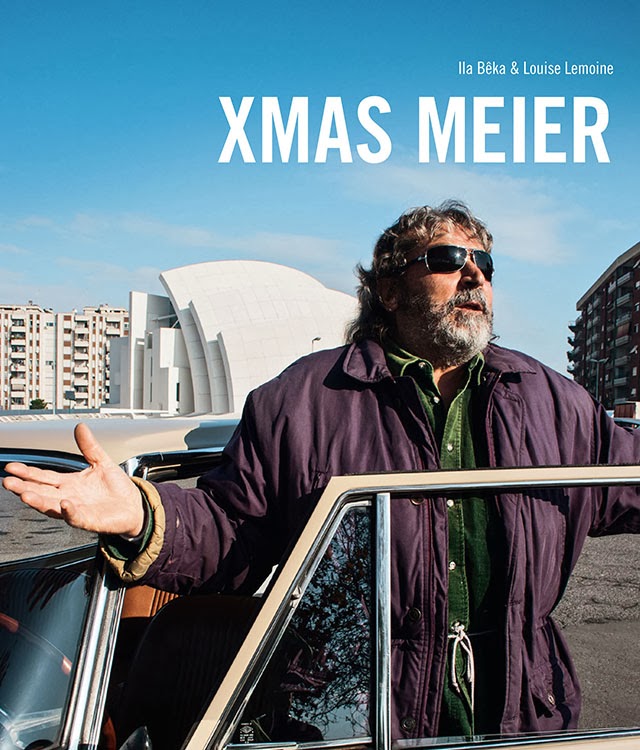 This is the fifth and last film in Ila Bêka and Louise Lemoine's "Living Architectures" series that I've reviewed, following ones on Rem Koolhaas's Bordeaux Villa, a winery in Pomerol, France, designed by Jacques Herzog and Pierre de Meuron, Frank Gehry's Guggenheim in Bilbao, and a trio of buildings designed by Renzo Piano. Xmas Meier is technically number three in what could be called the filmmaker's "trilogy in five parts," but given that Christmas comes in three days I held off on a review of it until now. That said, the holiday plays a small part in the film, occupying perhaps 5 of its 51 minutes, but it does give us a chance to see Richard Meier's Jubilee Church full of worshipers. The rest of the time we see the church from the point of view of the neighbors in Rome's Tor Tre Test neighborhood (one woman fell in love with it as she watched and documented it being built from her window, but one man hates it for the incessant bells that blare over any sound in his apartment proximate to the bell tower); we hear the priest go into a surprising level of detail on the building and its materials; and we hear from others who have devoted parts of their life to the church's existence.

Easily the biggest surprise in the film – something that retains a certain level of enigma even after watching the film – is a visit, in the "meanwhile, elsewhere" chapter, to another church (in Rome?) that looks like a low-budget version of the Jubilee Church; instead of "self-cleaning," light concrete, the walls are gray and mottled, there are two "sails" instead of three, and this other church is much smaller. Even after hearing from the architect, who is blurred out and unnamed during his appearance on camera, we don't know if this church was inspired by Jubilee Church (it was completed sooner, but Meier's church was delayed three years, completed in October, 2003, complicating matters) or if it plagiarizes Meier's creation. If anything, the visit illustrates how the architectural characteristics – scale, material, proportion, and space – that Beka and Lemoine veer away from in their films determine much of a building's success in how it is subsequently used (or abused) by its occupants. In the case of the sub-Meier church, the architect is visibly upset at the church's decision to flip the congregation 180 degrees, something that Meier surely would not have allowed (I'm reminded of a clip in a film on The Getty when he berates somebody working in the cafe for not laying out the tables and chairs per his working drawings).

After seeing and now reviewing the handful of "Living Architectures" films, one thought that comes to mind concerns the subject of their films. What buildings are appropriate for their documentaries that focus on the use, maintenance, and experience of the buildings, rather than their form, materials, and other aspects of design? Must they be designed by famous-name architects? Would a department store designed by an in-house architect, for example, be any more or less appropriate than Gehry's Guggenheim in Bilbao, what is arguably the most important building in the last 20 years? Theoretically Bêka and Lemoine's approach could be used on any building, but by taking aim at five of the biggest names in architecture today the duo dismantles the hero worship that accompanies coverage of buildings designed by these and other architects.

By focusing on how a building is used, the filmmakers show that even those considered the best in their profession aren't omniscient. The films also show that any building will have its fans and detractors, making it impossible to please all the people all the time. These five statements – buildings and films – show the values and risks in taking chances. As much as architecture relies on new forms and an almost constant stream of innovation, each building becomes a test case, with outcomes pleasing, disappointing and unexpected. The duo's depictions of these buildings reminds architects of the lives their buildings will take once they are done with the job; keeping these lives in mind will hopefully result in more considered buildings that are beautiful and functional.