A Conversation on MoMA's Plan for Expansion

I'm at the New York Society for Ethical Culture for the ArchLeague/MAS/AIANY event on MoMA's controversial expansion plan by Diller Scofidio + Renfro (DS+R). I'll update with photos (pardon the low-res, cameraphone shots) as the evening progresses, adding some commentary tomorrow.

For background on the controversy, which involves the destruction of Tod Williams Billie Tsien Architects' 2001 American Folk Art Museum (AFAM), which MoMA purchased in 2011, see my previous post on DS+R's plan unveiled three weeks ago.

A crowd packs the New York Society for Ethical Culture on the Upper West Side: 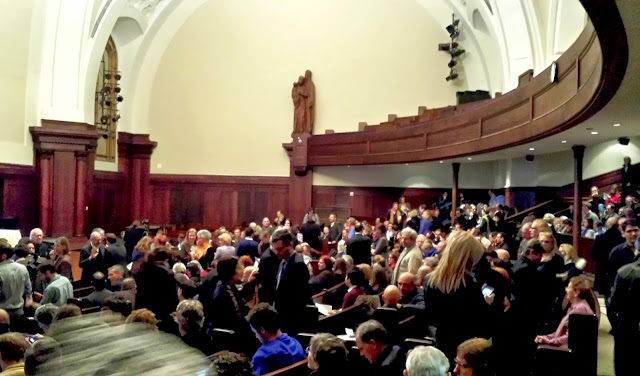 MoMA's Glenn Lowry (director) and Ann Temkin (curator) begin the proceedings by outlining their main objectives with the expansion, namely that they have a responsibility as an important cultural institution, and therefore they need more space to show more art. Temkin uses the Frank Lloyd Wright archives that MoMA jointly acquired in 2012 as an example of something they'd be able to show with more galleries, clearly to appease to the crowd of mainly architects. She also mentions that while MoMA traditionally show the art of the past and the art of the present, a "new generation of curators" is working in across multiple histories in a "non-linear, networked" fashion. Here Lowry presents before Temkin speaks: 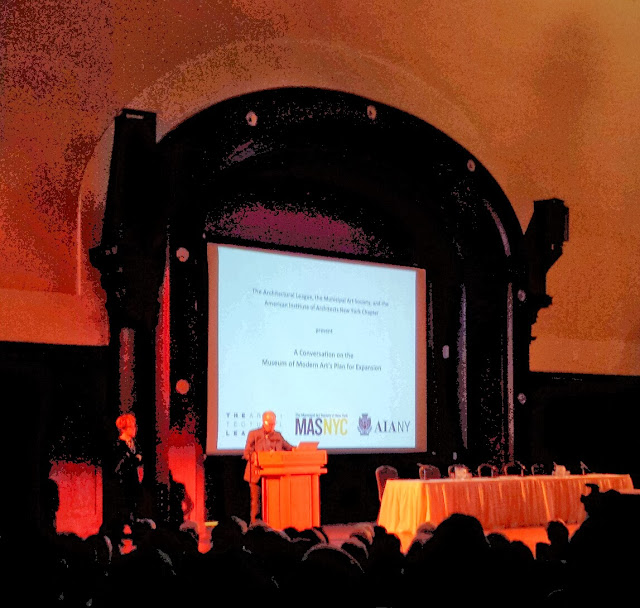 Liz Diller of DS+R starts her presentation by stating the two reasons why they accepted the MoMA commission:


1) They believed they could save AFAM;
2) They believed in MoMA's "forward mission" of expanded and diverse programming that results to some extent from the new generation of curators that Temkin mentions. 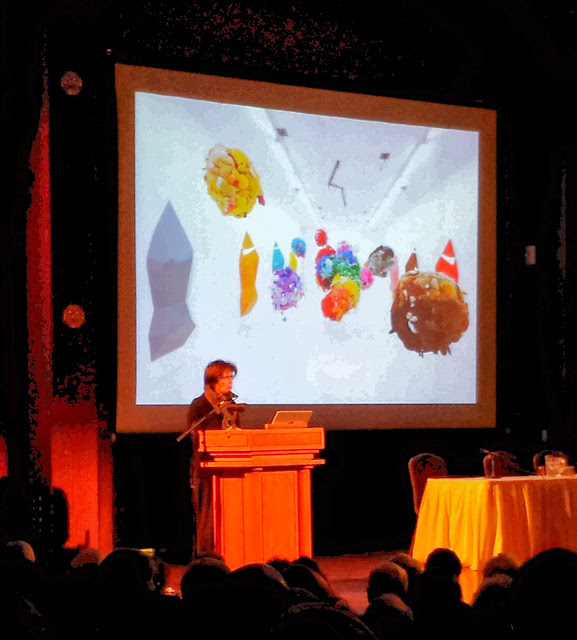 Diller then explains the goals of their six-month study, based on the notion that there is a "good MoMA" (represented by the view of an art-filled gallery above) and a "bad MoMA," which is the crowds of people in the lobby and elsewhere: 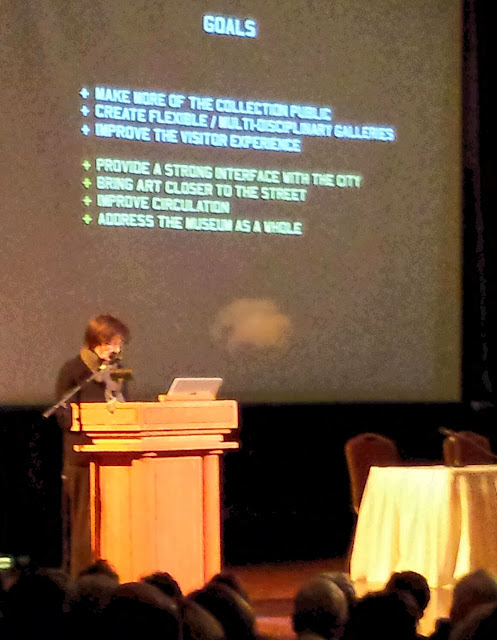 Starting with a plan showing the current extents of MoMA in yellow, AFAM in pink, and the Jean Nouvel/Hines Tower in Green (which includes gallery space for MoMA on the lower floors), Diller explains the "closed loop" of the chronologically ordered galleries in MoMA's Taniguchi building (loop not show in this photo, but imagine a clockwise route moving from the atrium in the middle of the yellow spaces moving to the left and then back to the atrium): 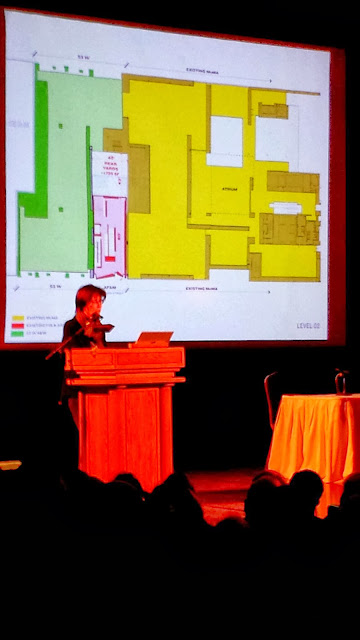 Diller then shows that the closed loop becomes a dead end that requires a back track, when the AFAM is not touched and the galleries extend only into the Nouvel/Hines tower: 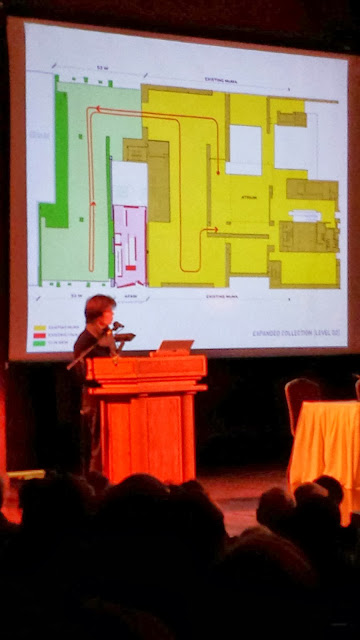 So naturally AFAM is seen as a way to close the loop again, by bridging across it in one or two places: 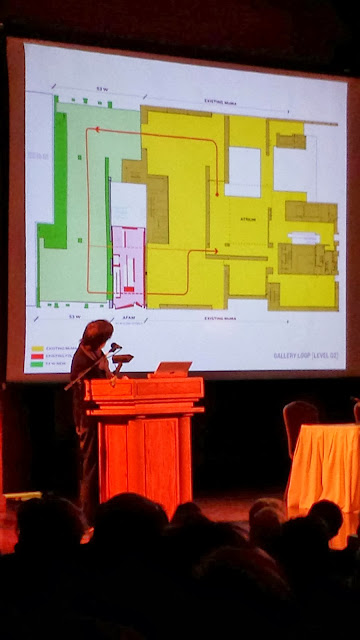 The best location of a bridge is at the front of the building, which would necessitate the "white glove" removal of the facade and it being mounted on a new armature incorporating the bridges: 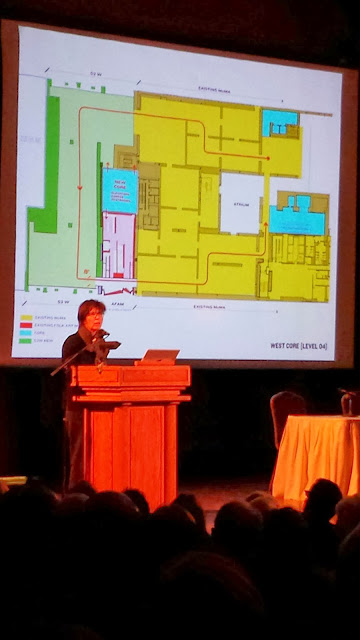 DS+R's analysis of AFAM finds four aspects of the Williams Tsien design that give the building its character:


1) Its facade;
2) The sculptural stairs;
3) The vertical openings through the building;
4) The skylights at the rear yard and top of the building.

The overriding concerns on the part of MoMA and DS+R are threefold:

This slide shows what happens when the loop is closed, the core is inserted into AFAM's rear yard, and the mechanical space is plopped atop the building: 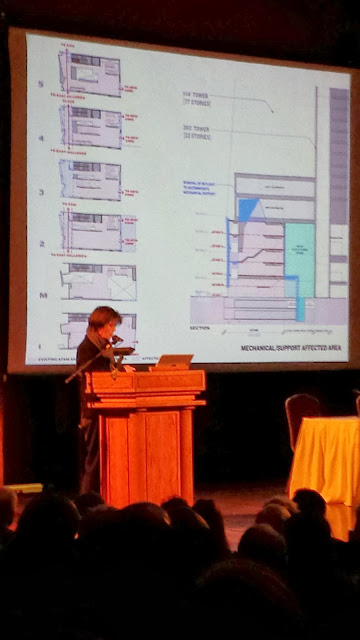 DS+R did convince MoMA to let them explore alternative programming within AFAM: 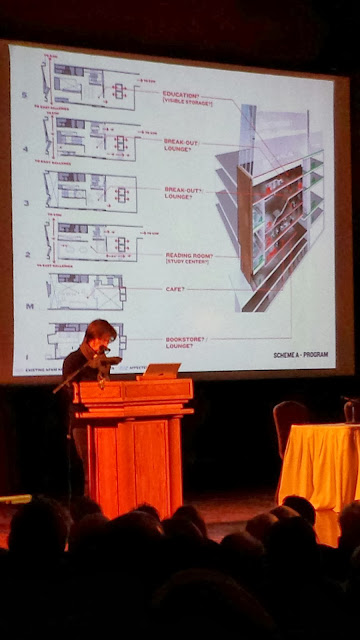 Even looking at ways that the existing building would be revealed through the bridge that closes the loop (note the way the floors do not align, one "misfit" that would necessitate removing most if not all of the floors in AFAM): 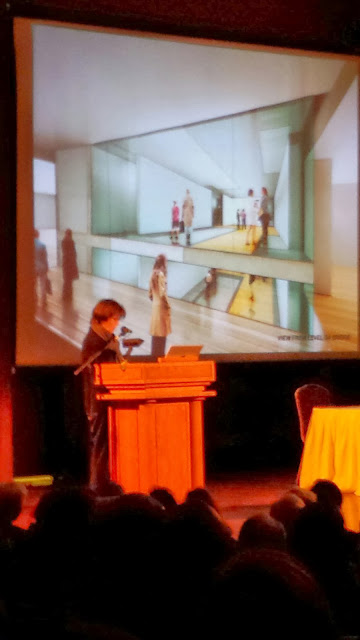 Diller tells the crowd that they really tried to reuse the 12-year-old building, but "the building is so obdurate," a term she uses at least three times during the evening.

One of the last images showed a newly considered East 53rd Street elevation, from the reconfigured entrance to the Taniguchi building and the clear glass inserted above the gift shop, to the "Art Bay" in place of the old AFAM, and the Nouvel/Hines tower. A band of clear glass unites all three: 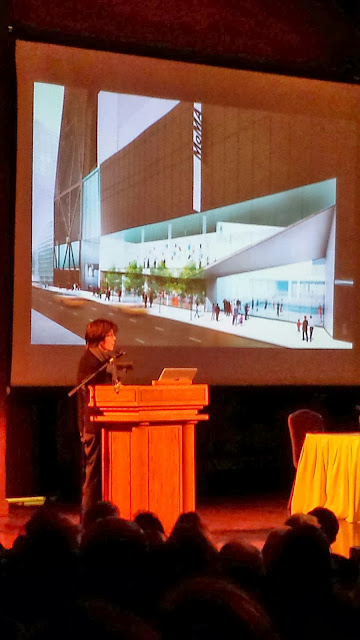 Another view of the packed auditorium: 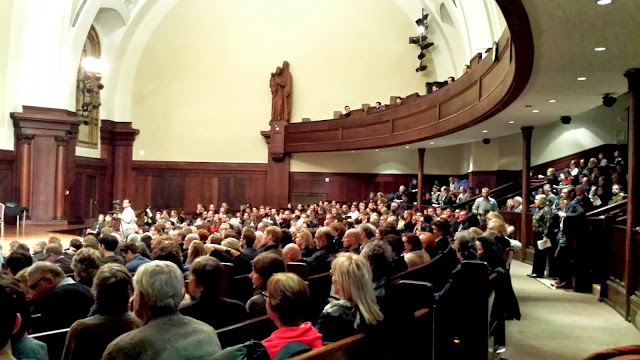 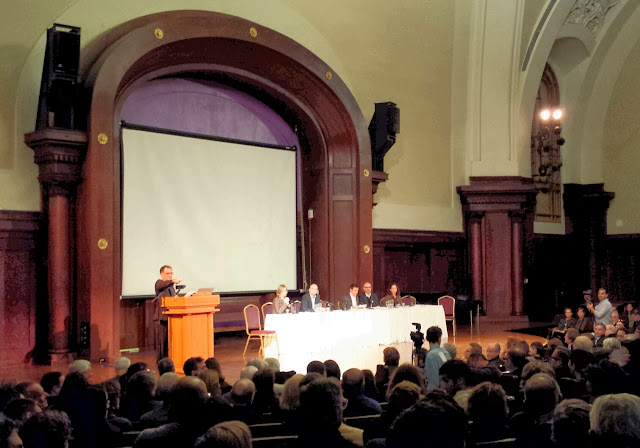 Some paraphrased highlights from a few of their comments:

Rustow: Given that DS+R's scheme is a feasibility study, and it is only as good as the questions asked, what they were given would have to result in AFAM coming down. Any change in that fact would entail posing the original questions in different ways. One way to do that is to treat AFAM like the original MoMA building, which has been altered considerably over the years, even when inadequate, because it has always been considered an integral part of the museum's evolution.

We should look to Carlo Scarpa for ways of being creative with preservation. For him, the materials on site were fair game, something he created a dialogue with. Additionally, by calling the preservation of just the AFAM facade "facadism" – with all the negative connotations of the term – something that could be creatively reused is being thrown out. 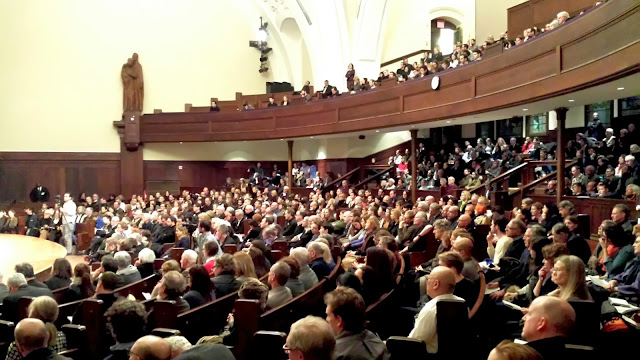 Otero-Pailos: Rethinking preservation is important. For example, what about preserving the smell of AFAM, which has a distinctive olfactory sense emanating from the way the building has been crafted. On the other hand MoMA has an "airport smell." And as advice to the MoMA board members, think ahead 15-20+ years, when the museum decides to relocate due to running out of space in Midtown; what will they have left to the city and its people? And what could they have left them? 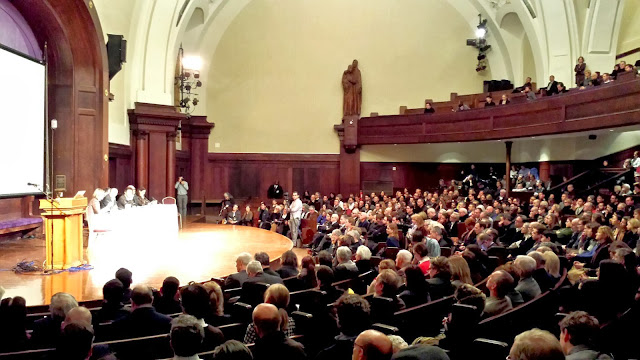 Stein: DS+R's process unfolds like a "mathematical theorem," such that one thing logically follows from the previous. But the continuous loop that it is founded upon is problematic. (I'd agree, since the closed loop is based on an art historical view of things, and the new generation of curators that Temkin speaks about work in other ways, meaning the loop is no longer a valid way to organize the museum.)

At the end of the night it is clear that most people in the audience and on the panel want to preserve AFAM in some way. This is particularly obvious when applause follows each of the above comments from the panel.

Lowry, Temkin and Diller join the panel on stage to field questions from the audience, written on cards given out at the beginning of the event. L-R: Kroloff, McGuigan, Otero-Pailos, Diller, Ouroussoff, Rustow, Stein, Lowry, Temkin: 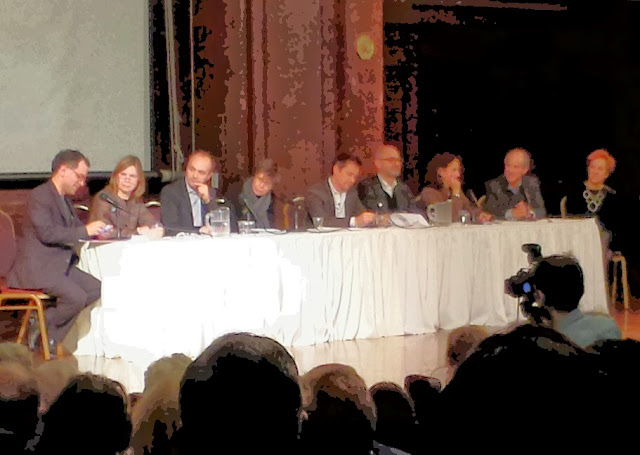 A couple questions are directed at Lowry, who nonchalantly says: "Our decision has been made," and: "We don't collect buildings." Any hope for further discussion is dashed in the course of one sentence, be it an expected one.

As the event comes to a close and Kroloff thanks MoMA and the panelists, the largest applause goes to Liz Diller for "her bravery" in presenting. Of course missing from the crowd are Williams and Tsien, but they probably know that coming to the "conversation" with the hopes of a different outcome is unrealistic, something most people in the crowd are sad to realize over the course of the 2-hour event.
Email Post