While looking at an article on Curbed earlier today, I was intrigued by a photo of the Frank Lloyd Wright-designed Guggenheim Museum in New York City. Specifically, what was the undulating canopy atop the cylinder in the foreground, mounted in front of the Gwathmey Siegel-designed slab addition? 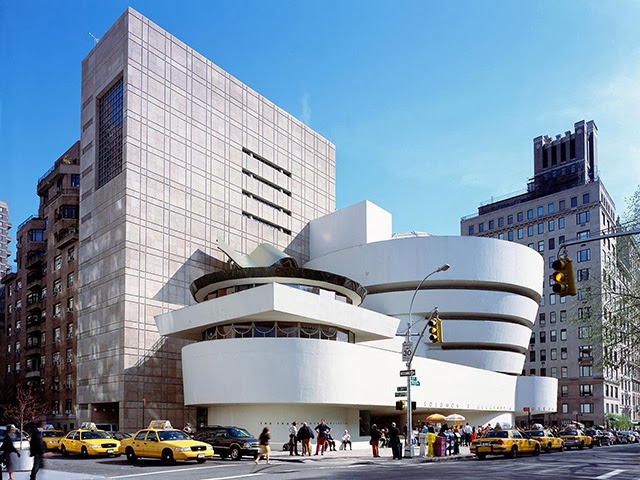 The rippling metal looked undeniably Frank Gehry, so my first thought was an exhibition on the architect who is responsible for the Guggenheim in Bibao, Spain. 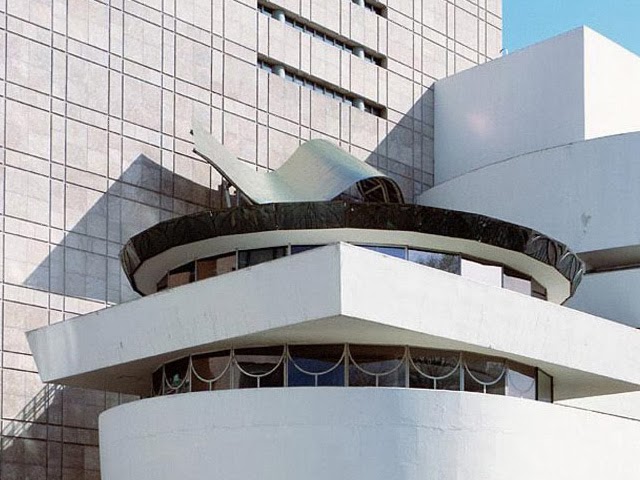 Turns out Frank Gehry, Architect was on display from May 14 until September 14, 2001, an exhibition I did not attend but whose catalog I have seen. As part of the major retrospective:


A second site-specific architectural element [in addition to one in the rotunda] is a titanium-clad canopy above the sculpture terrace off Tower 5. The canopy extends over an outdoor café, which has been created especially for this exhibition. The undulating forms of this structure recall those used to create the façade of a hotel at Marques de Riscal (1998–present), a winery in Elciego, Spain, and dramatically mediate between the robust curves of the Frank Lloyd Wright building and the rectilinear vocabulary of the Gwathmey Siegel tower. This special installation provides a first-hand opportunity for visitors to experience Gehry's designs on a built scale. [Source]

A. Zahner Company was listed as a supporter of the exhibition on a press release for the exhibition, and not surprisingly they fabricated the aluminum and titanium canopy, first in Kansas City: 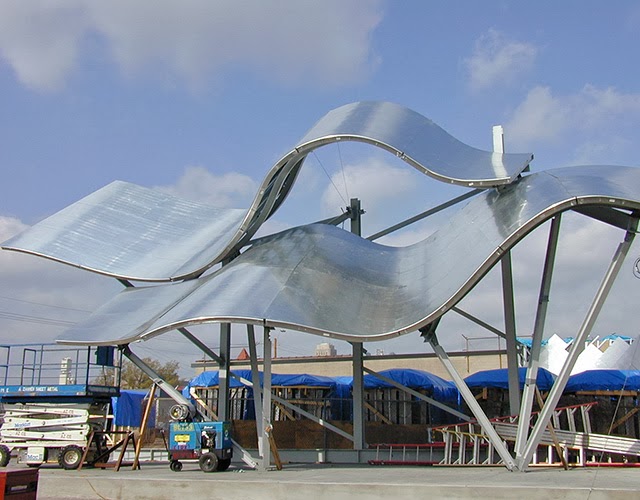 Then on the Fifth Avenue site: 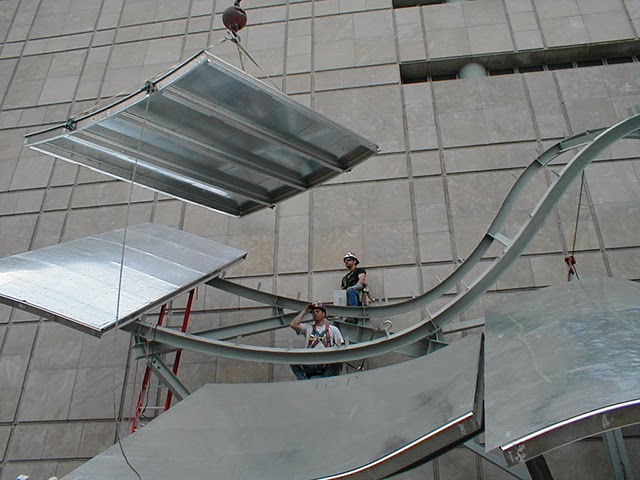 A couple of A. Zahner elevations conveyed the scale of the canopy relative to the Wright museum: 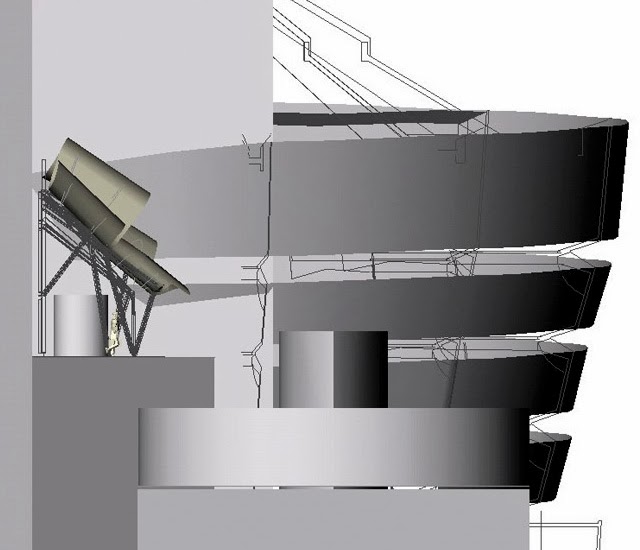 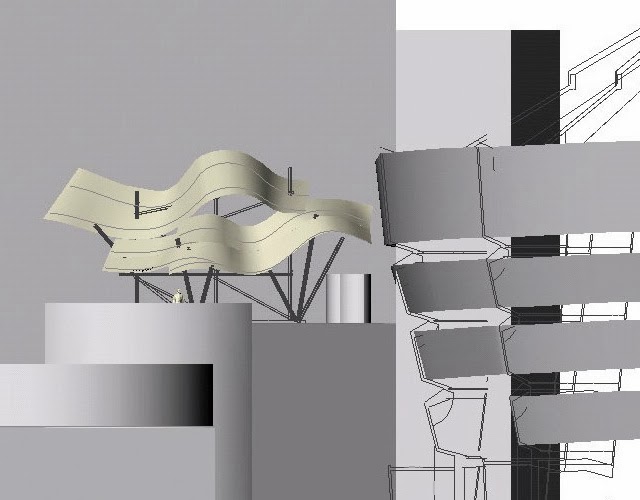 And I think their photo from above captured how the canopy "mediate[d] between the robust curves of the Frank Lloyd Wright building and the rectilinear vocabulary of the Gwathmey Siegel tower": 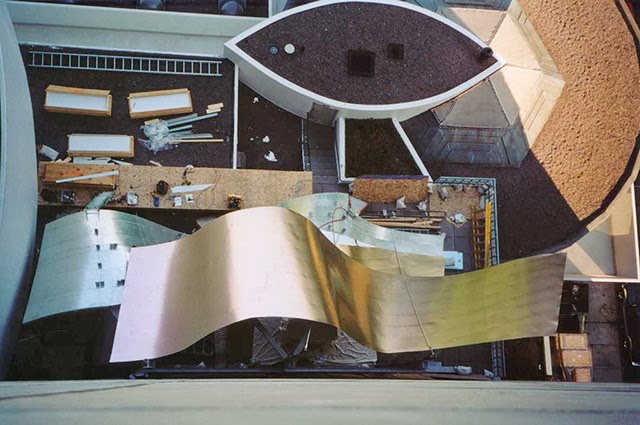 Lastly, what I thought to be a now-forgotten element from a major exhibition about the world's most famous living architect (even then, four years after the Guggenheim Bilbao was completed), was embraced by at least one artist, Rachel Cozad, who moved the canopy and cafe to an otherwise empty field: 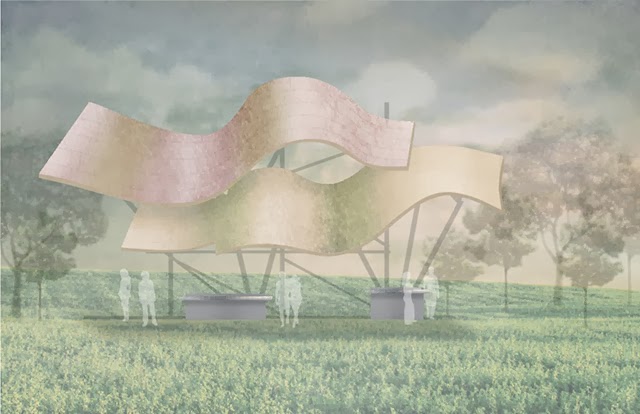 According to both Zahner and Cozad, the canopy was considered for permanent installation. It's kind of a shame that didn't happen, as Gehry's canopy seems to fit well atop the Wright building...better than in a field or a Kansas City parking lot, at least.
Email Post