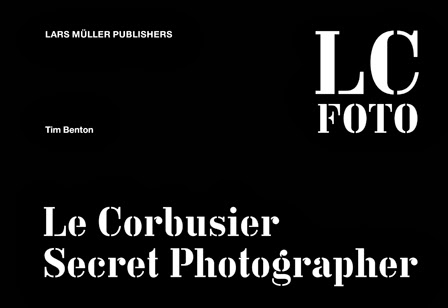 Le Corbusier is easily one of the top three most written about modern architects, up there with Frank Lloyd Wright and Mies van der Rohe. A search for "Le Corbusier" in Amazon's books section yields 7,070 titles; if we safely say 10-120% of those books are by or about the Swiss/French architect, that's still around 1,000 titles (not to mention the additional titles that refer to him as Charles-Édouard Jeanneret rather than his pseudonym). Narrowing down the search by year, about 50 titles on or related to Le Corbusier came out last year, including this title by Tim Benton. What these numbers show is that any new publication on the architect must find a niche that has not been explored ad nauseam. Le Corbusier Redrawn and Cosmos of Light, two titles I reviewed last year, are cases in point; as is Benton's extremely detailed study of the Le Corbusier's photographic output.

Wait. Le Corbusier taking photos? While the architect's own books are populated with photographic evidence to support his arguments (think of the photos of cars alongside those of the Parthenon in Vers une Architecture), it's close to impossible to think of an example of Le Corbusier's own photos. Sketches, definitely, but not photos...except perhaps his "voyage d'orient" of 1911. And this is a sort of paradox, since in Corbu's time photography was a form of technology like cars and planes, something that he should have embraced over the old-fashioned method of drawing by hand. That he didn't says as much about Le Corbusier as it does about photography. As a tool for Le Corbusier they were more documentary-like, unable to express the subtleties of drawing or painting or his other means of expression.

Benton actually positions Le Corbusier's photos "between the professional architecture photograph and the pictorial travel picture...[belonging] to the genre of specialist photographs—those of geographers, engineers, archaeologists, and architects, who took photographs for particular reasons." Taking in the hundreds of photos collected in the book, it's hard not to agree with Benton's categorization. Corbu's photos are far from beautiful, yet they are more than simply "I was here" travel photos; there is clear intention in subject, framing and so forth, even if his techniques were not as refined as the rest of his output.

Benton's study is split into two sections, reflecting the two periods of Le Corbusier's life when he actively used cameras: "Jeanneret's First Photographic Campaign 1907-17" and "Le Corbusier, the Cinema, and Cinematographic Photography 1936-38." The first section is highly technical, focused on the cameras Le Corbusier experimented with and later abandoned, while the second section focuses on the places he went and people he traveled with more than the particulars of the cameras (though Benton does devote a few pages to the 16mm camera Corbu used). Chapters with text and thumbnail photos (second image above) alternate with larger photo spreads on black backgrounds (image above). Photos in the former are too small to grasp details, but many in the latter (enlargements of the thumbnails) are quite grainy, especially those blown up from 16mm films. Rounding out the study are QR codes prefacing many of the spreads, each one linked to short films that show Le Corbusier as enamored with the forms of nature as those of his industrial age.