Book Review: The Simpsons and Philosophy 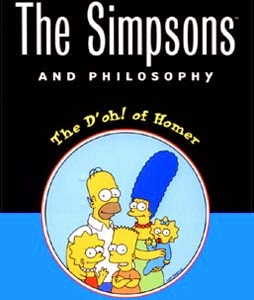 As a big fan of The Simpsons, I'll admit the sitcom is much easier to swallow than philosophy, which I try to like but have a hard time deciphering on my own. So finding this book, it appeared somebody found a way to express philosophical thinking to the masses, using the depth and appeal of our favorite animated family. Eighteen essays fit into four categories that focus on the characters, recurring themes in the show, ethics, and specific philosophers. Some essays rely heavily on quotes and episodes from the show to express philosophical ideas, while others speak philosophically with occasional reference to the show. Most people will enjoy reading the former, though each essay has something interesting to say. For example, Skoble's essay, "Lisa and American Anti-Intellectualism" hits the nail on the head regarding the intellectual gap the book attempts to fill, while Conrad's contribution, "Thus Spake Bart" is a great primer on Nietzsche, the "bad-boy" of philosophy.

Certainly nothing groundbreaking exists in these pages regarding philosophy, and analyzing comedy does run the risk of draining the life from it, but the book succeeds in finding a way to explain a gamut of ideas from the origins of philosophy in ancient Greece to twentieth century thinkers, while also illuminating parts of The Simpsons that even hard-core fans may have missed.