Earlier today I ventured up to the Riverlands Migratory Bird Sanctuary to check out the Heron Pond Viewing Blind designed and built by students from the Sam Fox School of Design and Visual Arts at Washington University for the Audubon Society and US Army Corps of Engineers. The spring 2013 digital fabrication project was led by Andrew Colopy and Robert Booth of Cobalt Office. 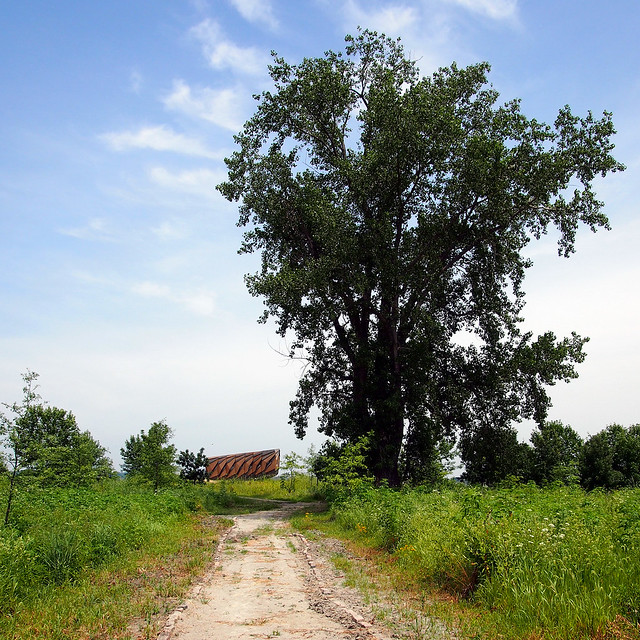 The building sits at the south end of Heron Pond, and it is approached via a gravel road that snakes through some farmland. From a distance it looks like a pine cone or some other sort of "natural" object sitting on the ground, but each step closer reveals the materiality of the construction. 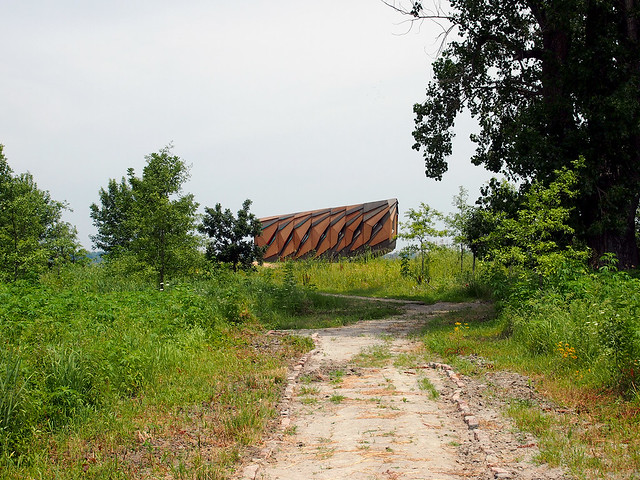 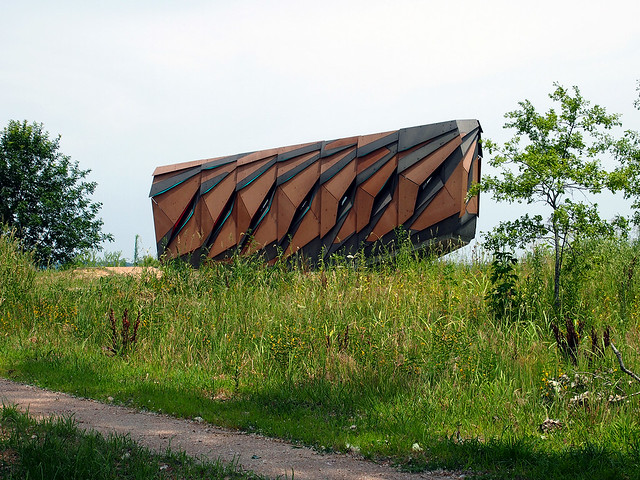 What looks to be a fairly solid object is discovered to be made from thin sheets in brown, gray, blue and red that layer over each other like feathers on a bird. This is an appropriate technique for camouflaging the building into its context, "tricking" birds into not seeing the structure and therefore allowing people inside to watch the birds without fear of scaring them off. 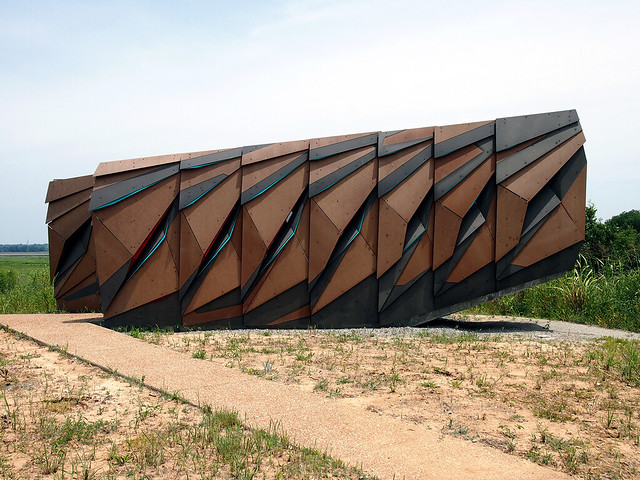 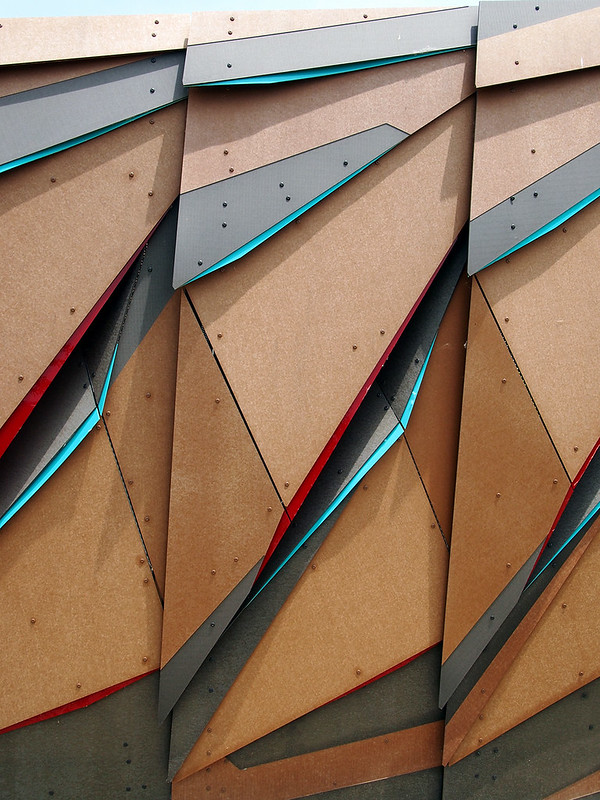 The side of the building on the approach from the small parking lot is primarily closed (views above and interior view below), with small cuts allowing natural light and ventilation. 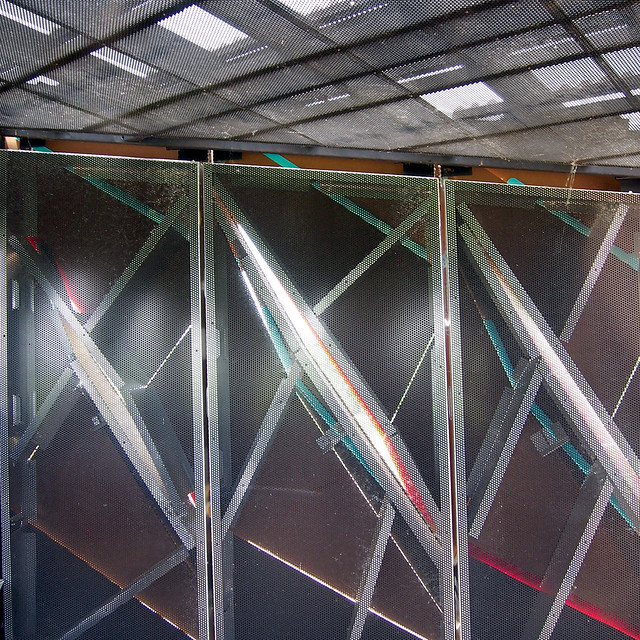 When entering the bird blind from the side, the interior opens up to the pond on the other side (left) through larger, diamond-shaped openings: 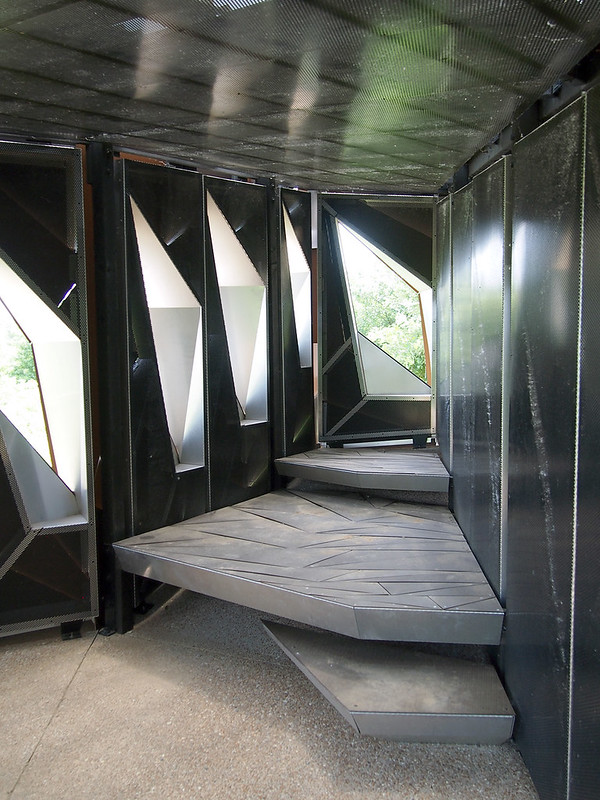 The below view is looking the opposite direction from the photo above, seen from the platform at top. The bench allows bird watchers to sit down and look out the windows to see the birds over the pond, though the diamond shape allows for standing and even for children to look through the openings: 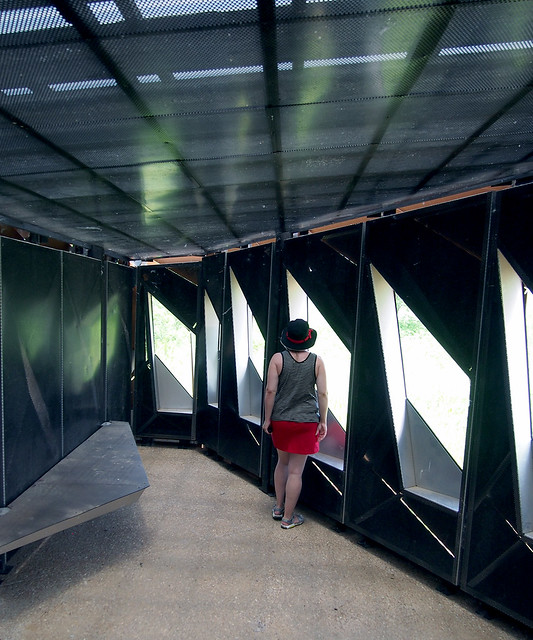 Here is the view when looking through the opening as in the above photo: 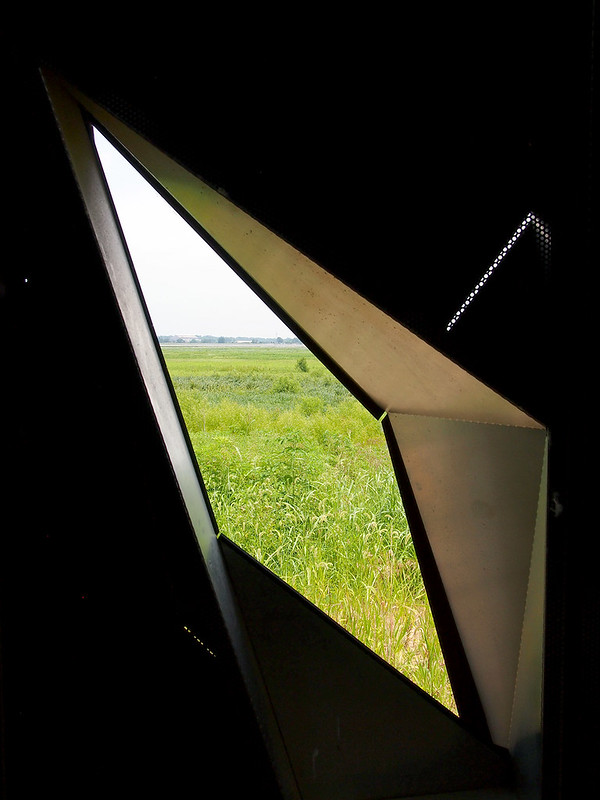 Here is the triangular flooring on the raised platform: 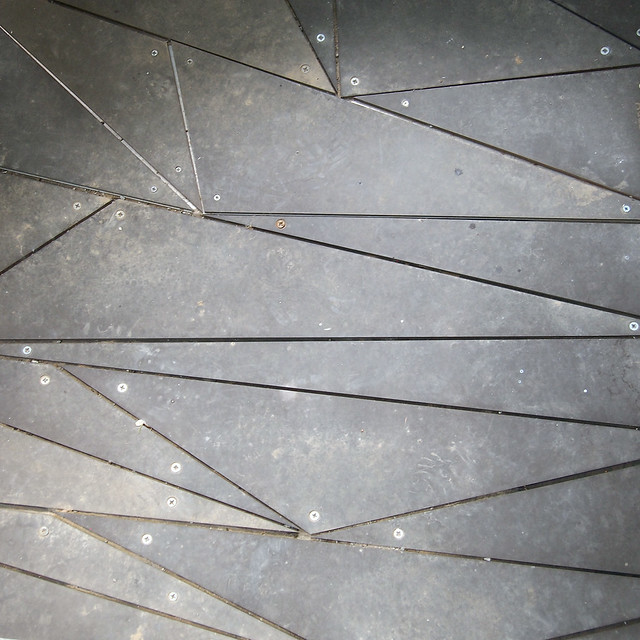 The view through the opening at the top of the raised platform: 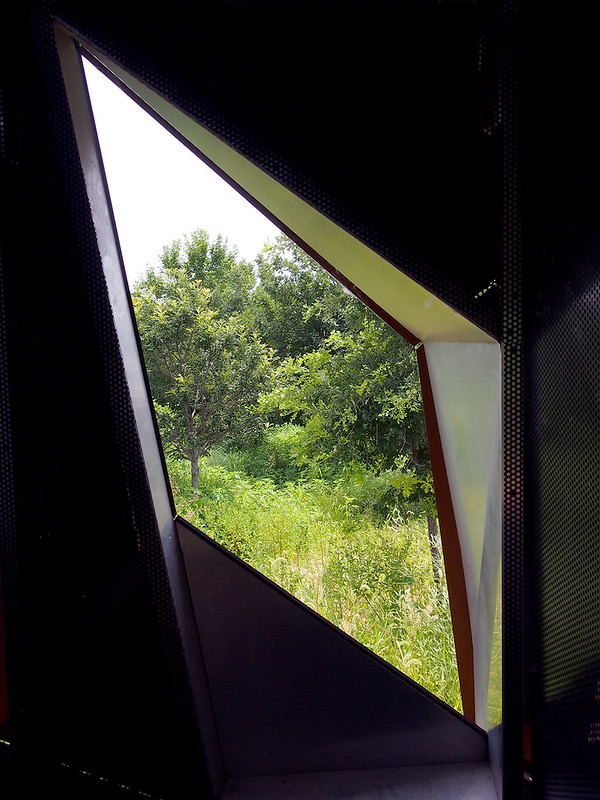 That same opening from outside showing the perforated ceiling inside: 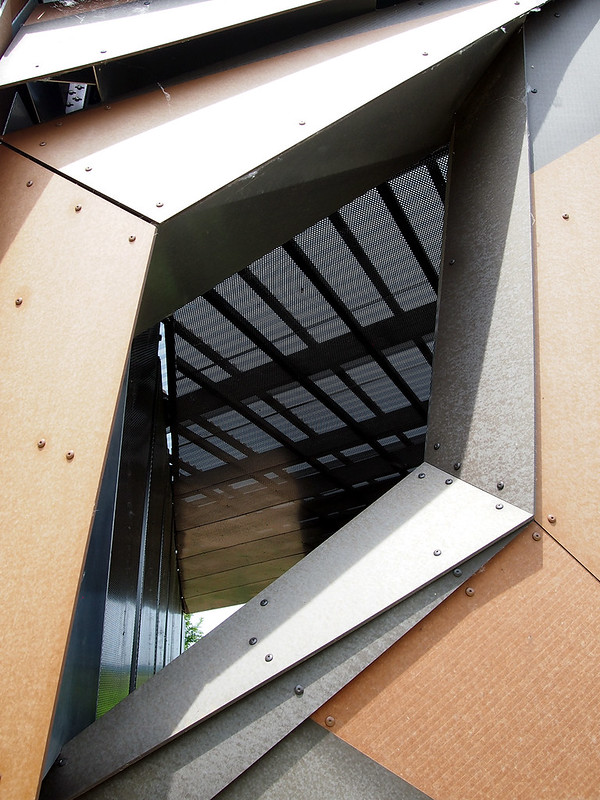 And that same opening (on the far right) from farther away: 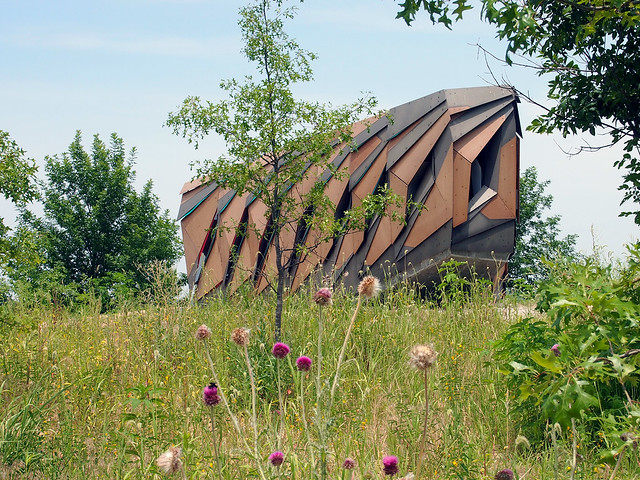 Up close the bird blind looks somewhat alien, but from a distance it nestles itself into its pond context: 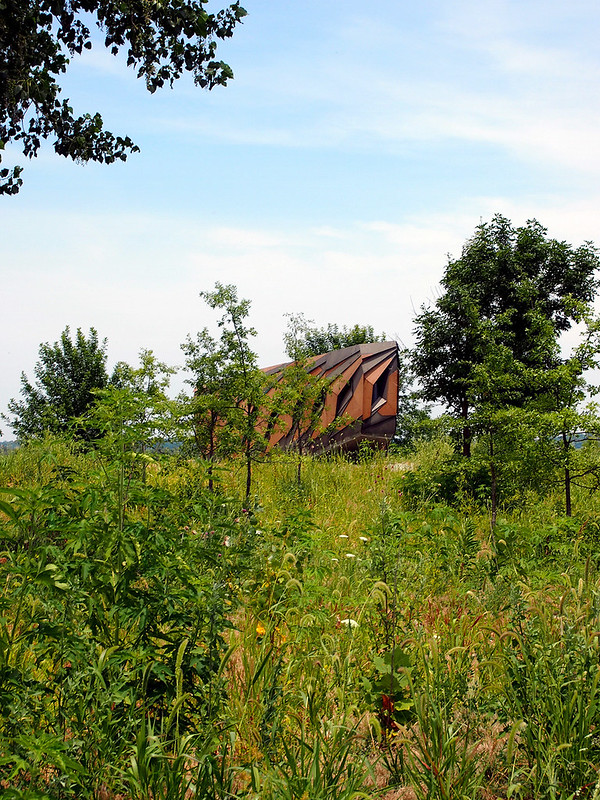 More on the project's design and construction from Washington University: