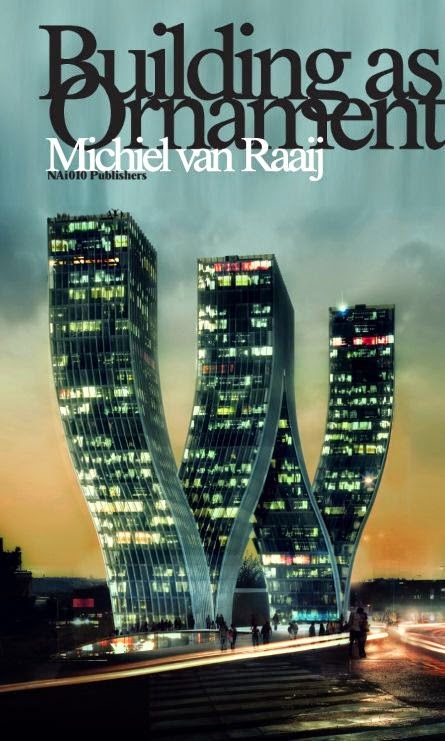 Before he took the helm at Dutch website Architectenweb, Michiel van Raaij penned one of my favorite architecture blogs, Eikongraphia (Iconography), which looked at buildings united through their resemblance to other things, things outside architecture. Projects, many not yet built at the time, were given a title that made it clear what sort of building-size iconography was in place: Gherkin, by Foster and Rocks, by Mazzanti, to name just a couple of the built projects. Michiel's comments were always in-depth and insightful, but much of the fun was in seeing the sheer number buildings being designed in such a way.

That was 5 or 7 years ago (the posts stopped in the middle of 2010), and today the prevalence of what Michiel calls "building as ornament" is much more widespread. It's hard to go a week without seeing a just completed building or just unveiled project on Arch Daily that resembles this symbol or that animal or this fruit or whatever the case may be. Michiel actually contends that we are witnessing the second generation of iconographic buildings, which are more nuanced than the attention-getting iconographic buildings of the first generation that he was covering on his blog.

While the trend of building as ornament can be grasped by many people, there is a good deal of disagreement over whether these second-generation icons are good or bad. Michiel sees them as unavoidable, not going away anytime soon. Therefore, he argues, architects should be deliberate and careful with how they design buildings as large-scale communication devices. Enter the interviews, which enable him to discuss the intentions of designing recognizable icons with eight prominent architects and two historians. There's Auke van der Woud, Denise Scott Brown, and Charles Jencks in the "iconographic detail" section; Adriaan Geuze, Michiel Riedijk, Alejandro Zaero-Polo, and Ben van Berkel in the "layered iconography" section; and Steven Holl, Winy Maas, and Bjarke Ingels in the "singular iconography" section. The interviews are bookended by two projects sections with numerous renderings and photographs of designs by other architects, and interspersed with two collage sections, one on "alphabet" buildings and one on "island" projects.

Occasionally in the interviews Michiel is met with resistance by the architects, ones who don't want to be known for designing "buildings that look like X or Y." While the author is able to clarify his intentions and then eke out some insight from his subjects, the end the chapter with Winy Maas's interview is telling of the precariousness of "building as ornament." It shows the reader MVRDV's controversial design for The Clould in Seoul from 2011, when comparisons to the destruction of the Twin Towers spread like crazy through the media, although the architects denied any intention as such (Michiel's interview happened before the design was released, and not surprisingly MVRDV did not return the author's later requests for comment). The design is a lesson in regards to the precariousness of iconography and confusion of messages across cultures; it certainly points to more nuanced design moving forward, along the lines of what Michiel is calling for.

Are we witnessing the end of icons or just a hiccup toward something else? Or to put it another way, is this book a snapshot of a brief period or a polemic for the evolution of icons? We will know in the coming years, as the answer lies with the architects (many in the book) that are fulfilling the wishes of clients around the world for buildings that stand out and get attention.