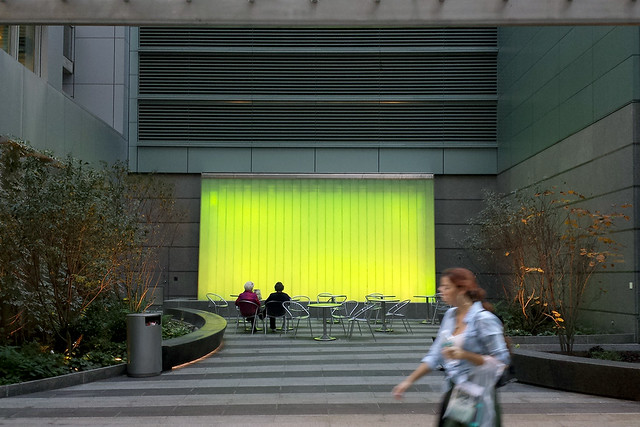 On the way home yesterday I walked along East 50th Street between Madison and Park Avenues to check out Manhattan's newest pocket park, the 50th Street Commons. Opened by the MTA yesterday, the park is a public space that is part of a larger project, a ventilation facility serving the East Side Access project, which will bring LIRR trains to Grand Central Terminal when it's completed in 2022. Yes, 2022.

The small park includes planting beds on the sides, striped paving and some loose tables and chairs in the middle, and a water wall illuminated by changing colored lights at the back of the shallow space. Doors to the ventilation facility can be found in two places: cut into the curved planter bed on the right, as seen in the above photo, and in the back left corner. My first thought upon seeing the park yesterday was that the designers at MTA are giving Midtown a contemporary update of the famous Paley Park. 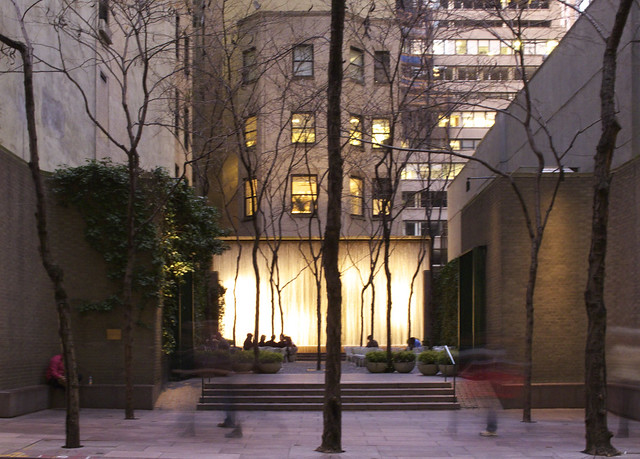 The similarities between the spaces are many: Each is a small pocket park; each has a water feature at its back wall; each has loose tables and chairs; each has some trees; and each has gates that lock the space at night. But the details are what make the 50th Street Commons pale in comparison. Respective to the above list, they are: Paley is a deeper space; Paley's water wall is more substantial and not capped by ventilation grilles; the chairs at 50th Street are crowded into the pinched space and the tables are too high compared to Paley; Paley's trees occupy the middle of the space, not just the edges, layering the space and creating some intimacy; and Paley's gate does not have a large overhead frame (unlike the one at 50th Street just visible in the top photo). The details of Paley result in a comfortable space that is a respite from the street, while the details of 50th Street Commons result in an uncomfortable space where people are on display. 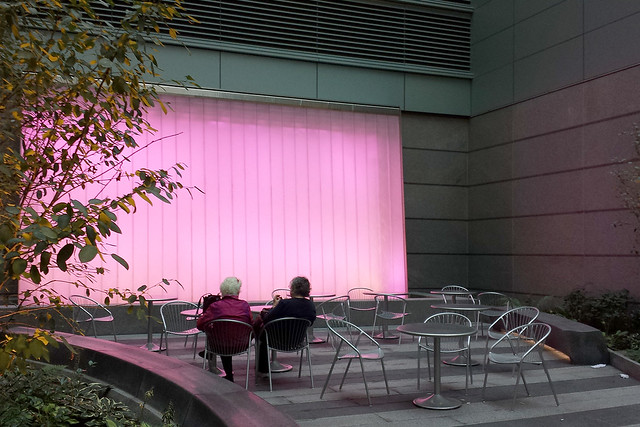 Is comparing the MTA's "gift" to Midtown with one of the area's – if not the city's – best outdoor spaces unfiar? Perhaps, but given the similarities it appears that Paley Park was a large, and suitable, influence on the designers. Too bad they didn't learn better from what Paley offers. At the very least, I'm hoping in five years time the trees will soften 50th Street's rough edges and make the space more inviting. That won't turn it into another Paley, but it will help.
Email Post