Parsons SCE's Interior Design Aftertaste symposium, Inside Imagination, takes place on Friday and Saturday at Parsons the New School for Design in New York. I was lucky enough to participate in last year's event, so I can't recommend it highly enough. Details on the two-day event are below. 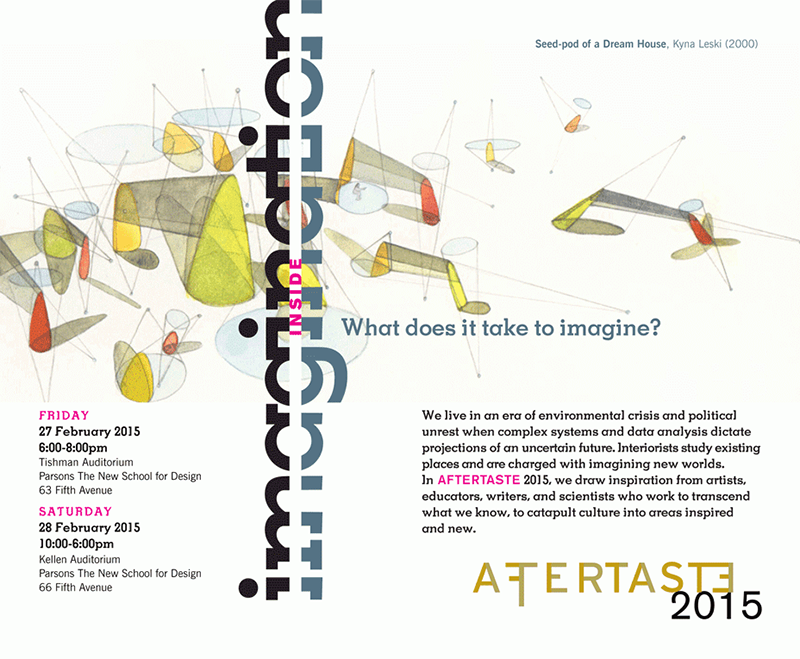 What does it take to imagine? We live in an era of environmental crisis and political unrest when complex systems and data analysis dictate projections of an uncertain future. Interiorists study existing places and are charged with imagining new worlds. In AfterTaste 2015, we draw inspiration from artists, educators, writers, and scientists who work to transcend what we know, to catapult culture into areas inspired and new.

Designers and thinkers who cultivate the imagination conjure futures, thinking beyond problem solving to that which has not existed before. What is the spark that creates new possibilities? How can we promote and develop imaginations that can envision and create interiors for an unknown future, rather than being beholden to the past? How can we cultivate the unknown in a culture increasingly defined by big data and digital devices of distraction?

On February 27 and 28, 2015, imagination alchemists, designers and experts gather to think and enact new possibilities and alternative paths through the interior of the imagination. The schedule of events will be as follows; please take special note of the location changes during Saturday’s events: