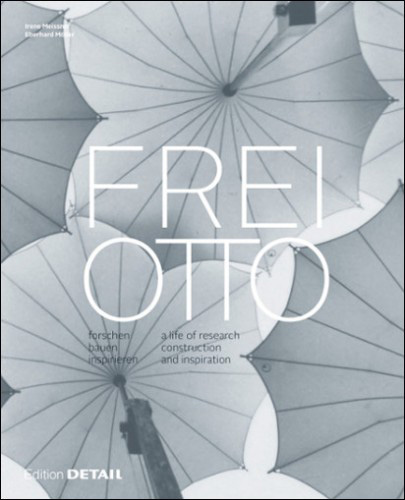 This book was planned as a celebration of the lightweight structures designed by Frei Otto on the occasion of his 90th birthday, but with his death just two months shy of his birthday this year it has turned into a celebration of the architect-engineer's life. Normally this sort of bad timing might go by without much of a word, but given the premature announcement of this year's Pritzker Architecture Prize due to Otto's passing, his accolades have been celebrated this year just as obituaries were pulled from the drawer. For those unfamiliar with Otto's many accomplishments, Meissner and Möller's book is an excellent place to start, covering the numerous projects he worked on in an accessible manner while also portraying his influence on other architects and engineers.

The slim volume, presented in German and English, features a foreword by Otto ("Architecture Nature"), essays by the co-authors, and one by Georg Vrachliotis. The bulk of the book is a presentation of the structures he designed, split into sections according to their forms and types: suspended structures (tents, membranes, cable nets, retractable roofs), standing structures (gridshells, branching structures), and floating structures (pneus, hyros). The documentation consists of photographs, many of them disseminated widely upon the Pritzker Prize, but also models, drawings, and photos showing the structures under construction. Rather than exhaustive, the book aims at making Otto's achievements understandable. For those who want to delve deeper into Otto's work, the book includes a thorough catalogue of works and bibliography.