Recently I got a tour of the new 34 Street-Hudson Yards subway station from Beth Greenberg and Emily Kotsaftis of Dattner Architects, the firm that serves as urban designer and design architect for the much-anticipated 7 Line Extension. The station opened on Sunday, September 13, but it is not 100% complete, since one of its two points of access from the new Hudson Yard Park, designed by Michael Van Valkenburgh with Toshiko Mori, is still under construction. The glassy turtleback canopy (designed by Mori) on the south side of 34th Street will be matched by another on the north side when that entrance is complete next year. 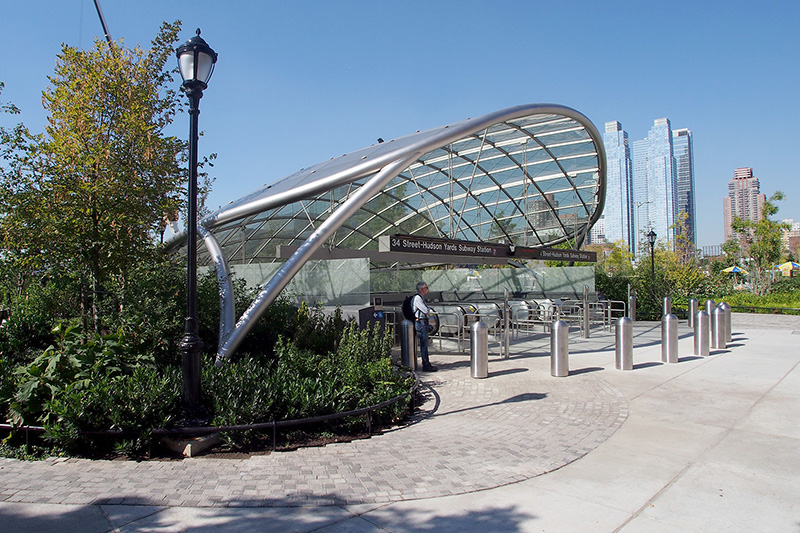 [All photos by John Hill]

Under the glass canopy is where I met a couple other journalists for the tour – check out Alexandra Lange's piece at Curbed for her piece – but it turned out to be about a half hour after our scheduled time, since the 7 Train wasn't running due to a broken rail. While this fact was lousy timing almost down to the minute (it happened as I was waiting at Court Square to transfer to the 7 Train) and completely unrelated to the station design, it is indicative of the sorry state of the MTA and NYCT lately, which are running trains on 100-year-old infrastructure and slogging through their efforts to add new stations. This makes the opening of the first new station in the city in 26 years that much more remarkable – and that much more of a chance for the state and city agencies to put a positive spin on things. Thankfully, the station is well designed and, for now, a pleasing station to pass through. 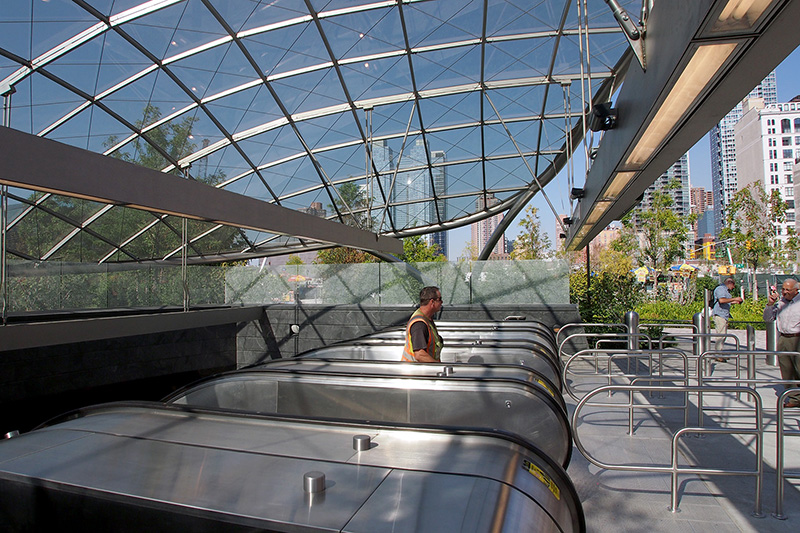 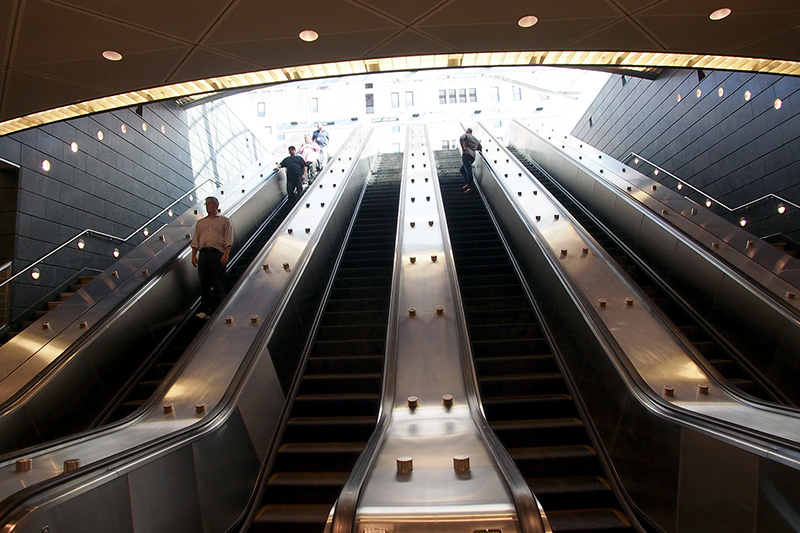 Although Dattner cannot take credit for the glass canopy that welcomes riders to the station and brings light to the station below, it actually fits well with Dattner's design below ground, which uses elliptical motifs in various places. One of the first spots is by the escalators, where Xenobia Bailey's two-part "Funktional Vibrations" was installed as part of the MTA Arts & Design program. The first section of the mosaic faces the escalators (not visible in the photo above), while the second part is found at the base of the escalators in an elliptical dome set into the ceiling of triangulated, perforated aluminum panels. With grays and beiges predominating in the floors, walls and ceilings, these artworks brings a refreshing splash of color to the station; unfortunately that color is limited to the ticketing area only. 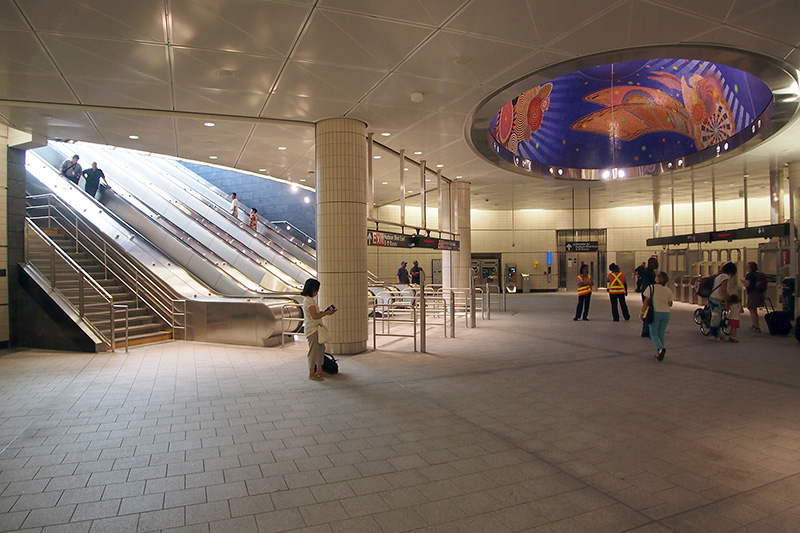 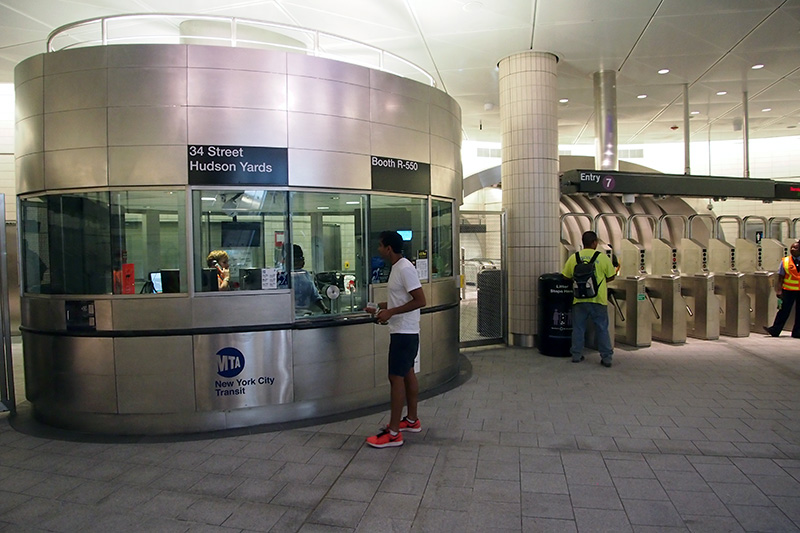 After disembarking the escalators (or the elevator from the park above), riders are confronted with three options: go to the elliptical booth in the middle for help, go through the turnstiles at right, or go through the turnstiles at left (vending machines, a fourth option, are on the far walls both left and right). It doesn't matter if riders go through the left or the right turnstiles, since they are connected behind the booth (photo below) and both elliptical portals go to the same place. For those in wheelchairs or with strollers, the elevators are to the left. Unique among the city's subway stations are these inclined elevators, what are in effect indoor funiculars. Although kids will love the ride, it's a slow one that, according to Beth and Emily from Dattner, was intentional, since they are geared for accessibility rather than joyrides. 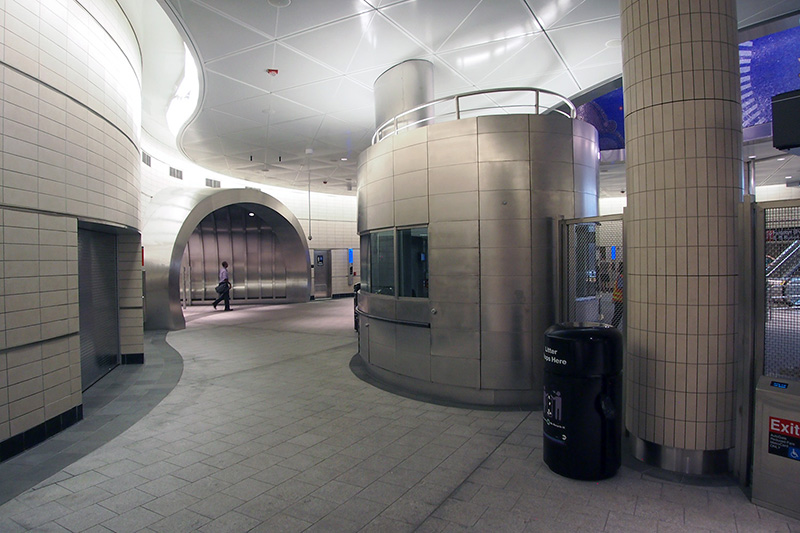 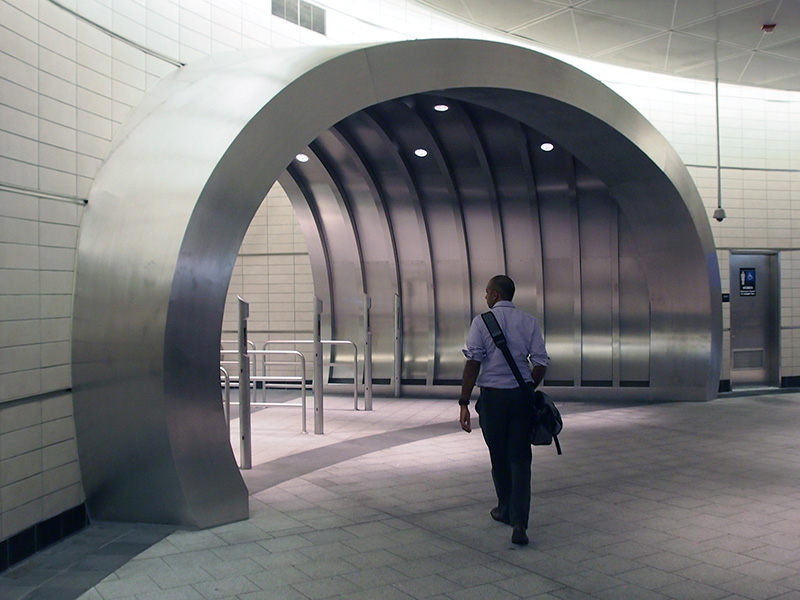 A second escalator ride brings riders down to the mezzanine, a few steps closer to what is the deepest subway station in the system at 125 feet (25 feet deeper than the 63 Street F Train, which I thought would be deeper). This also makes the escalators the longest in the system. After riding the inclined elevator, the escalators feel speedy. 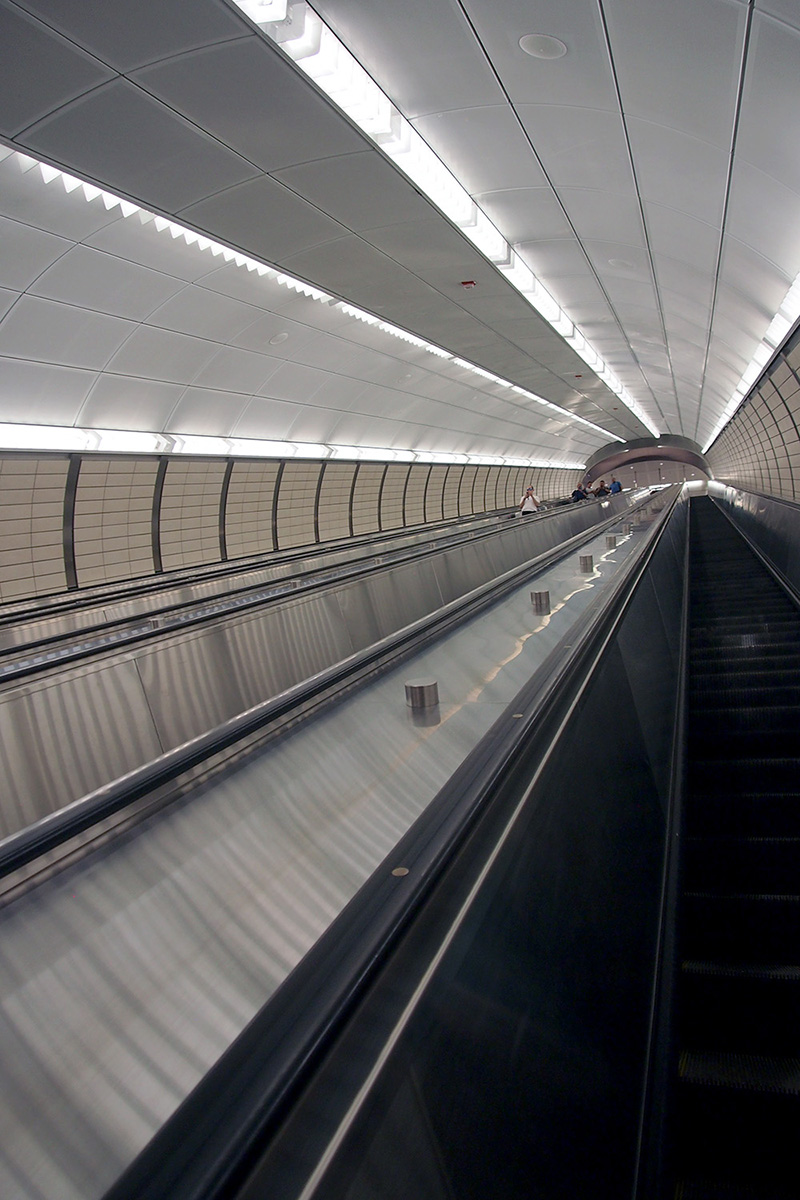 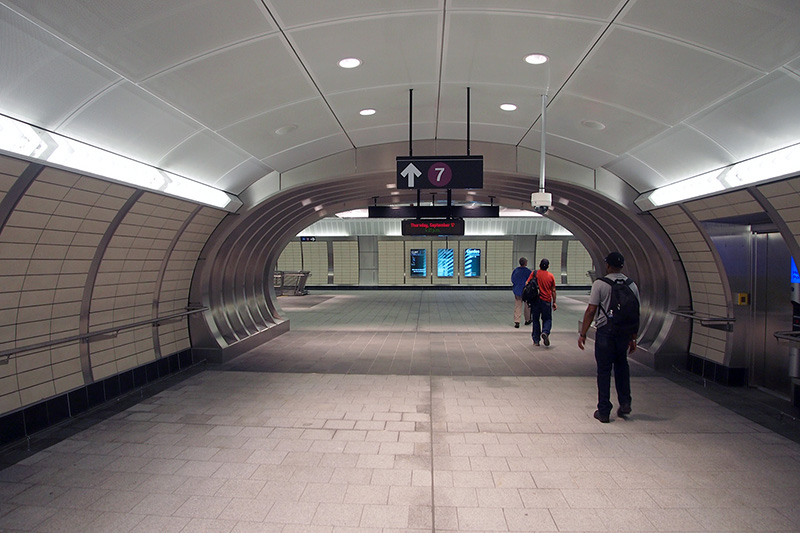 Like upstairs, riders walk through elliptical openings at mezzanine level. According to Dattner, this design feature was used to make the wayfinding in and out of the station intuitive, so it would not rely on signage. Nevertheless, MTA's typical signage is ever-present, cluttering up the design alongside additions such as security cameras. 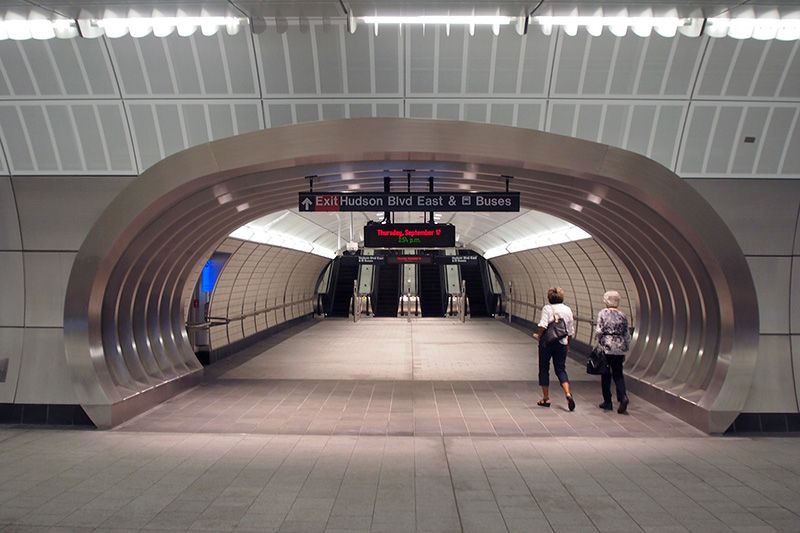 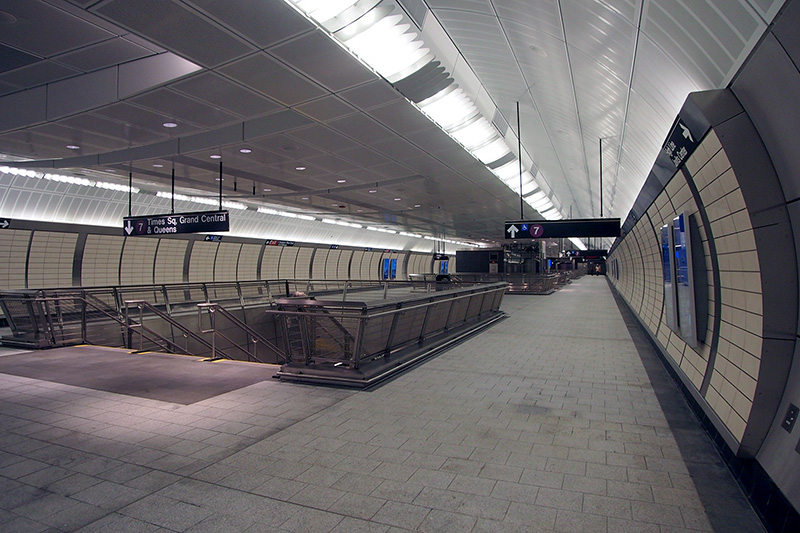 Once "breaking through" the portal at the base of the escalators, riders come to the mezzanine, which is, well, huge. It feels more like one of the London Jubilee stations than anything else in the MTA system. Why so wide? The station was planned initially when Hudson Yards was a site for the new Jets stadium. Even though that fell through, as did the city's 2012 Olympics bid, the current development at Hudson Yards, combined with the popular High Line and Jacob Javits Center, meant the designers stuck with the target of 30,000 riders per hour at peak times. Given that the 7 Train was not running on the day of our tour, the large station felt overly grand and empty, necessitating a trip some time in the future to see it being used more fully. 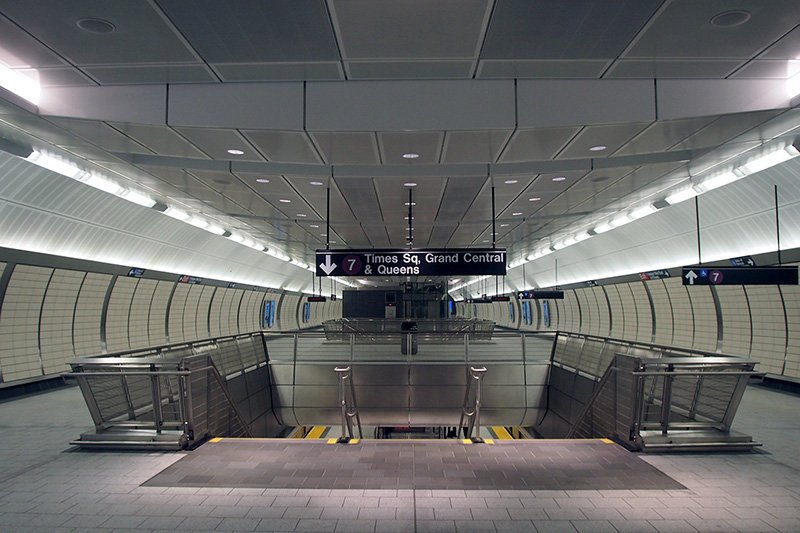 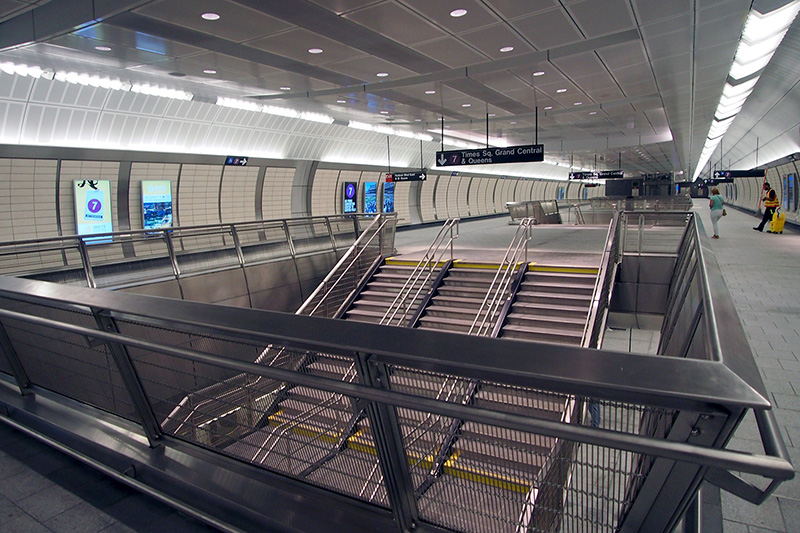 Again, the elliptical theme is present at mezzanine level, in the arc of the ceiling that is interrupted by a low ceiling in the middle crammed with all of the necessary services for ventilation, fire and so forth. Generous stairs bring riders down to track level in eight spots along the length of the mezzanine. At track level (not shown here), the platform is 35 feet wide, much wider than other stations, even including the new Second Avenue stations that are under construction but way behind schedule. 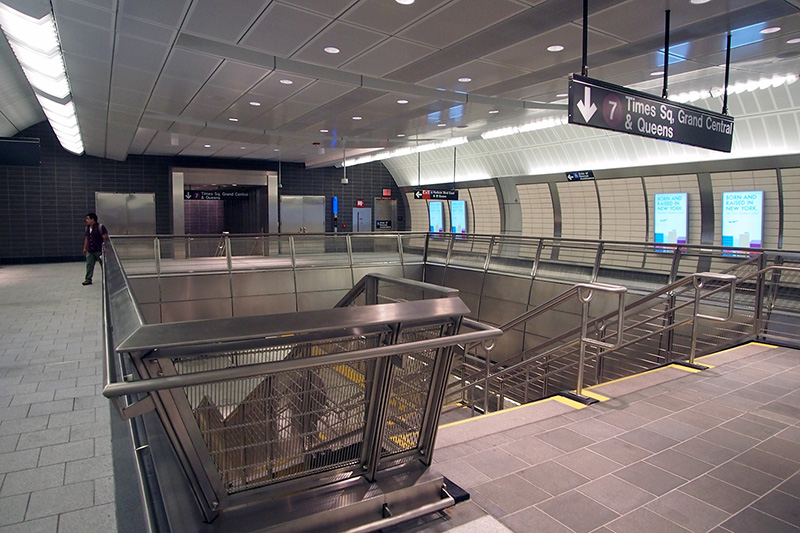 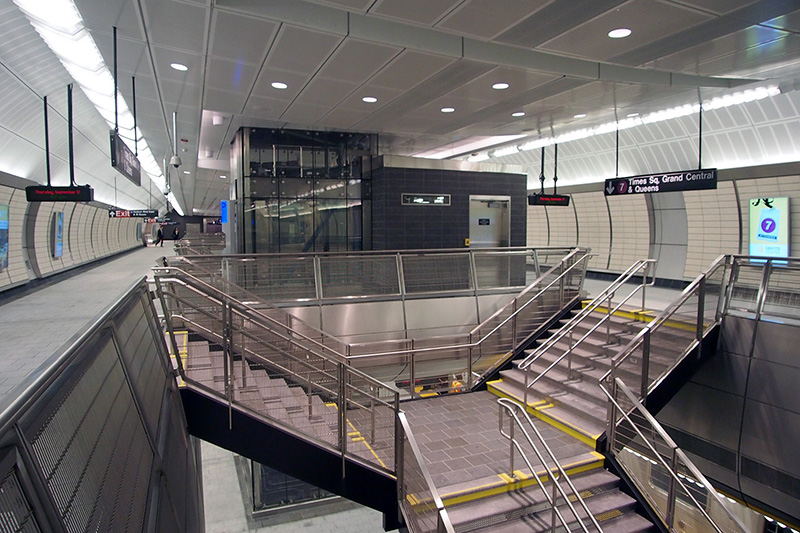 In hindsight, I wish that the tour with Dattner Architects happened at a more fortuitous time. Although seeing the station empty made me appreciate some of the details (curved walls, modular materials and assemblies, angled guardrails, even the location of the video screens), it was like seeing a stadium or some other building designed for throngs devoid of what brings it to life – people. Yet even for this station, it will be a long time before it reaches the number of riders anticipated, since construction of Hudson Yards, while moving ahead full steam, is so big it will be years before the towers are done and full of workers. Only then will we see how well the intuitive wayfinding, generous platforms, novel elevators and other design features hold up.
Email Post