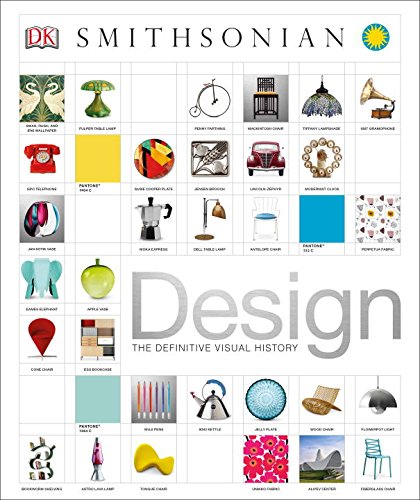 The other night I attended a book launch for Public Natures, a new monograph on the work of Marion Weiss and Michael Manfredi. During the talk, which also included Stan Allen, David van der Leer and Alexandra Lange, a common point that came up was the way different disciplines (architecture, landscape architecture, urban design, etc.) are overlapping or merging as new ways of addressing the city and sustainability arise. The common bond mentioned was design, something that even a politician can be a part of, per Marion Weiss. This point was brought up in the talk relative to the work of Weiss/Manfredi, which blurs the distinction between building and landscape in many of their projects (such as the Olympic Sculpture Park and their first built project in Olympia Fields, Illinois), but it surely applies to other designers.

Last night event comes up in the context of this review of a completely unrelated book, DK's Design: The Definitive Visual History, because the ubiquity of design – the way it permeates and affects just about every aspect of daily life – is one of many things that can be grasped when flipping through this voluminous book on 150 years of design. Be it architecture, furniture, graphic design, or industrial design, one glance at the thumbnail images on the cover reveals the spread of design across this spectrum, evident especially by the inclusion of three Pantone® colors – even color is designed! 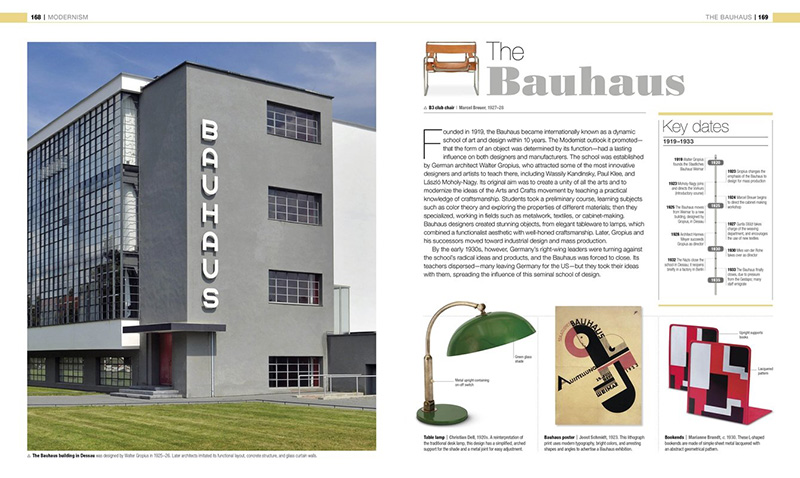 Given the general field of "design" that is covered in the book, combined with the short texts and abundance of captioned images that DK is known for, as well as the publisher's association with the 161-year-old Smithsonian Institution, it's no wonder that the information is cursory and there are many more omissions than there are designers and designs that made the cut. Further, a strong Western emphasis (though not explicit) permeates the book, perhaps a result of the Smithsonian's involvement; one good example is Japanese design, which is represented by Japonisme, "the fashion for Japanese art and design that spread across Europe and North America in the late 19th century." Those looking for Japanese architects or other designers will be disappointed. 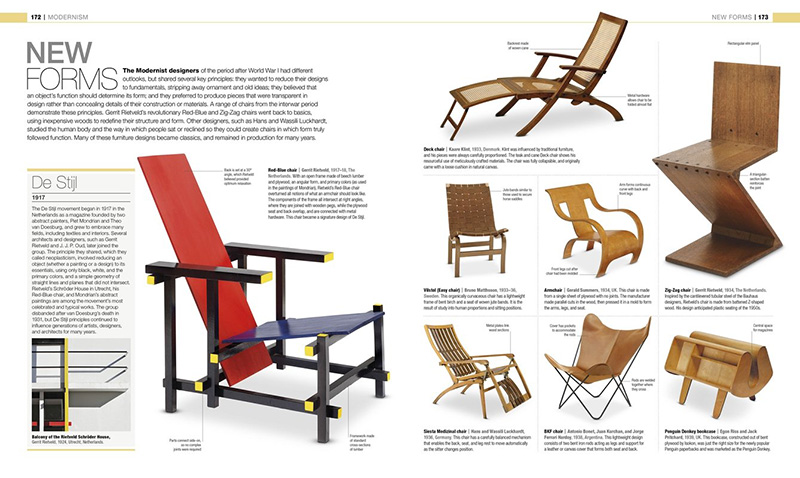 Setting aside the omission of just about everything from outside of Europe and North America, the architectural offerings in the book are fairly slim. Sure, it's got Alvar Aalto, the Bauhaus, Le Corbusier, Antoni Gaudi, Zaha Hadid, Mies van der Rohe, Eero Saarinen, and of course Frank Lloyd Wright, but where is Gehry's Guggenheim Bilbao, Eliel Saarinen, Bucky Fuller or Louis I. Kahn? I'll bet the selection wasn't easy, particularly as the designers and their designs needed to fit into a more-or-less chronological book with chapters organized by style (from "Arts and Crafts" to "Postmodern and Contemporary"), but in the realm of "design," apparently architecture is not as important as furniture or industrial design, which are given more thorough treatments. Or to get back to the point that started this review, the architects that are included in this "definitive visual history" tend to be those that bridge other design disciplines. Most of the architects mentioned above also designed furniture, and while Gehry's Bilbao isn't in the book, his museum for furniture manufacturer Vitra graces its pages. Architects appear to hold a marginal position within the larger realm of design, but it is one that is strengthened when they see design as something not bound by discipline or medium and venture beyond purely buildings.

Even with the above critiques, I'd recommend this book for people who have a strong interest in design, particularly furniture and industrial design, but don't have an accordingly strong background in it. Like DK's many travel guides and children's books on this or that topic, this is an excellent introduction, a jumping off point to learning about the designers and their designs that have shaped a large part of our world.