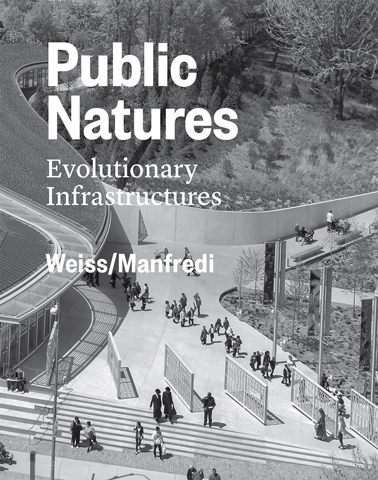 In previous posts on this blog I've contended that the choices made when laying out architectural monographs reflect on the priorities of architects. Whether they like it or not, monographs function like other books, in that they have a beginning, middle and end, even if they don't have overt narratives like novels. Readers – at least this reader – experience monographs in a similar way, moving from front to back and thereby piecing together a story in their minds based on this linear movement through the pages and projects. Due to this innate way of reading printed books, the beginning is almost always given over to essays that introduce the work; the middle is often occupied by the most important project at the time of the book's writing; and the end is where a project indicative of the future course is located. This is how I see the traditional monograph, but I also see many architects departing from the norm and therefore swapping out these ingredients at the beginning, middle and end of the book for something else.

Weiss/Manfredi, the New York-based practice of Marion Weiss and Michael Manfredi, have done something like this (knowingly or not) in their third monograph, what I'd call a half-monograph, since part of the book is given over to a presentation of ten recent buildings and projects (split into two halves – evolutionary infrastructures and social infrastructures) and the rest is given over to discussions with architects-slash-academics. This second ingredient makes Public Natures special; not surprisingly, the discussions occupy two of the three major points in the narrative layout of the book. At the beginning, though, is an essay by Weiss and Manfredi (coming right after a short foreword by Barry Bergdoll) that introduces the first five projects, but for me the first project in the book – Olympic Sculpture Park in Seattle – says as much about the couple's work than the essay. Completed in 2007, the popular project gave them a modicum of fame, in architecture circles at least, while encapsulating the "evolutionary infrastructures" that would come to define much of their teaching and practice. The book's theme, and each project coming after it, can be seen as building upon the infrastructural design they executed in Seattle. 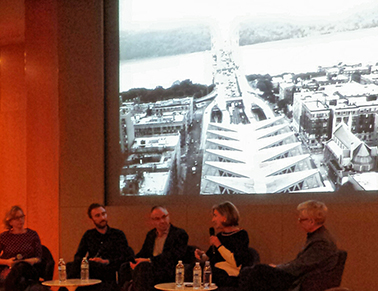 The firm's appreciation of what I would most simply call "creative infrastructure" came across in a book launch at the New York Public Library a few weeks ago. Manfredi and Weiss (on the right in the above photo) were joined by Alexandra Lange, David van der Leer and Stan Allen (left to right in same photo) to speak about the book and the firm's work, but the most interesting discussion was dedicated to examples of creative infrastructure, particularly ones in New York. Pictured is Pier Luigi Nervi's bus terminal near the base of the George Washington Bridge, photographed from one of the residential towers built over the street like the bus terminal, but they also discussed the BQE in Brooklyn Heights, which stacks three levels of parking below a pedestrian promenade overlooking Lower Manhattan. These and other projects are also highlighted in the first essay, clear parallels to Weiss/Manfredi's work in Seattle and beyond.

Returning to the book's narrative structure, the middle of the book is occupied by a lengthy "roundtable discussion" on mega-projects with six architects firmly planted in academia, like Weiss and Manfredi: Preston Scott Cohen, Felipe Correa, Keller Easterling, Paul Lewis, Hashim Sarkis, and Nader Tehrani. The discussion is called "Terms and Conditions" and is structured into three sections: form, position, and conduct, each of them broken down into a handful of terms, such as grounding, Utopia, and valency. This is clearly an academic discussion, and accordingly it reads less as a conversation and more as statements from the various architects/academics. This isn't entirely a bad thing, though I would have welcomed more (or any) back and forth among the participants; as is, the statements are illuminating and often self-referential, paralleled by quotes in the margins from Reyner Banham, Vincent Scully, Josep Luis Sert and others.

Following this first roundtable discussion is another essay by Weiss and Manfredi, this time prefacing the last five projects, which are bookended by the Diana Center at Barnard College and the Singh Center for Nanotechnology at the University of Pennsylvania. Following those projects is the book's finale, another roundtable discussion, this time with Kenneth Frampton on megaforms. Here, accompanied by Justin Fowler, the discussion is more of a conversation, and it surely benefits from Frampton's wealth of knowledge about architectural precedents and his convictions on architecture, landscape and cities. The two roundtable discussions stem from Weiss and Manfredi's research studios held at Penn and Harvard GSD, and they give the projects that they bracket a scholarly framework. It's clear that the duo is constantly probing their work and investigating its trajectory, and the book is a reflection of these considerations. In addition to a solid presentation of some of the most consistently rewarding architecture being produced today, the book is a solid argument for the wedding of practice and pedagogy, of designing, teaching and learning.