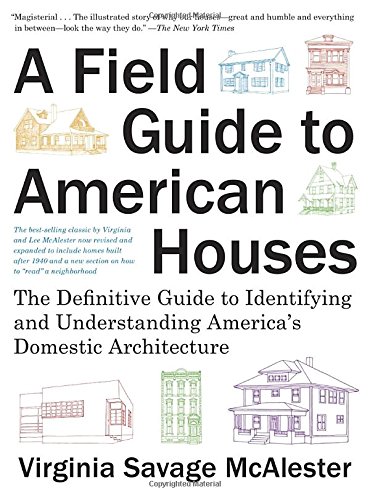 My high school offered drafting and architecture classes, something I took for granted at the time but realized later was quite exceptional, especially given the fact that every other year our class would design a house that would be built by the building trades class. Much of the class focused on single-family houses, not surprising given the suburban location outside Chicago.

One class assignment that springs to mind as I hold Virginia Savage McAlester's weighty guide to American houses in hand was a study of a particular style: mine was Colonial Revival (super-abundant in the area), but every student had a different style. To carry out the assignment, I researched the traits of the style – side-gabled roof, dormers, symmetrical front with central entrance, an off-center chimney, fakes shutters, etc. – and drove around with my mother (I had yet to gain my driver's license) to photograph houses that fit the criteria, later pasting them onto a presentation board.

All these decades later I have no idea what source(s) I used to research the style, but it wouldn't surprise me if I had used the first edition of A Field Guide to American Houses, authored by Virginia and Lee McAlester and published in 1984, about five years before my architecture class. If I didn't consult the book, my project was worse off for it, such is the exhaustive nature of the book as evidenced by the second edition, which was released in hardcover in 2013 and in paperback late last year.

The "field guide" of the title is an apt phrase, since the book looks and functions in much the same way as other field guides, such as those for birds. Presented in a chronological format, the various house styles are described in multiple ways: through b/w photos (by Steve Clicque) that show almost exclusively the fronts of houses; through drawings (by Suzanne Patton Matty) that diagram the basic features of a style and hone in on details; and through the words of McAlester (without her former husband) that are clear and very thorough. Much of the text functions as captions to the numerous photos, again making the book function like a literal field guide and helping readers know what to look for as they travel about the American residential landscape.

Uses for the book are more numerous than as a guide for architecture students researching house styles. Homeowners can use it to determine what style their house is, or what sort of house style they appreciate as they look for a house. Historians and preservationists can use it in determining the important features of a particular style as well as how additions and transformations can be applied sensitively. And architects working in a traditional manner can use it to be precise in carrying out their designs.

I'm particularly interested in the section on modern houses, which covers everything from Frank Lloyd Wright's Prairie style at the turn of the 20th century to the International Style and what McAlester calls "21st-Century Modern." Without the benefit of time that allows past styles to be considered more precisely, the recent modern styles are a diverse bunch where boundaries are blurry; one chapter even takes on the name "Other 20th-Century Modern" as a reflection of today's jumble. Nevertheless, McAlester's approach – using time, financing and academia/awards, not just form, as a way to structure the house styles – has its merits and should help in making modern/contemporary residential architecture easier to understand by a wider audience.

I'm also interested in McAlester's last section, "Styled Houses since 1935," which consist of the traditional designs that accompany and/or alternate with modern styles; the former have a need for a style guide while the latter's focus on innovation means they do not. The styles in this section are the ones I love to hate, especially the bloated McMansions (what the author calls "Millennium Mansions") and the "New Traditional." Although I appreciate some of the houses in the "American Vernacular" chapter that ends the book, the houses in this last section illustrate a misunderstanding of style. The Millennium Mansions mine history but then group parts of it together into a mish-mash that denies why (I like to think at least) styles existed in the first place: as a means of designing buildings of their time and doing it in a way so the results are pleasing and not confusing or ostentatious.