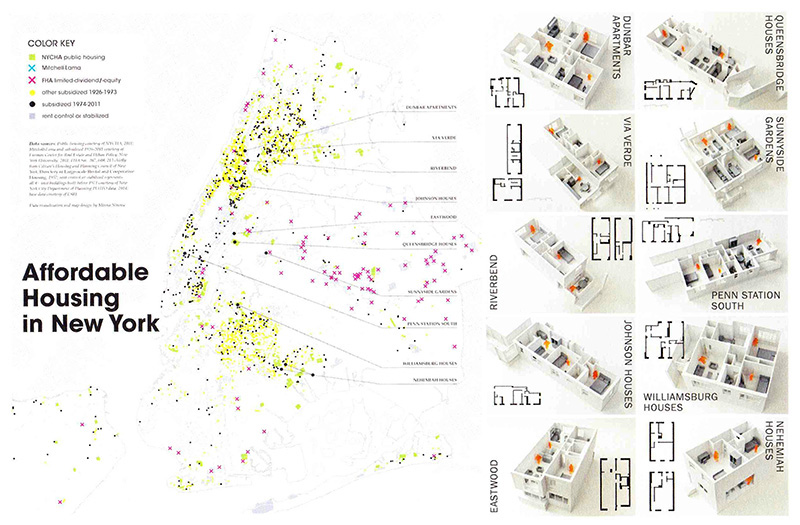 [Map of projects in Affordable Housing in New York]

Of the three exhibitions presented here, this is the only one (so far) that I've seen in person. Curated by Matthew Gordon Lasner from Hunter College, and Matthias Altwicker and Nicholas Dagen Bloom from NYIT, Affordable Housing in New York (AHNY) opened a few days after the similar-sounding but unrelated exhibition Affordable New York closed at the nearby Museum of the City of New York. I missed that exhibition, which was curated by Thomas Mellins, but according to Untapped Cities, "it aims to situate New York City as a pioneering force behind the affordable housing movement," and it "also emphasizes the range of people that are served by the various initiatives here." In this regard, there is a good deal of overlap (as well there should with affordable housing being the shared subject) between the earlier exhibition and the more compact AHNY. 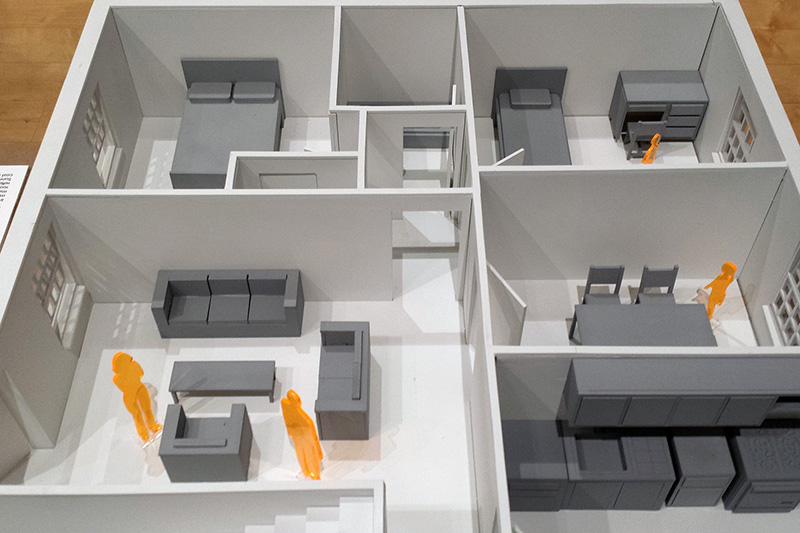 AHNY is made up of three parts: 1) A timeline of 100+ years of affordable housing in New York; 2) Large-scale models of apartments in ten housing projects spanning that timeframe; and 3) Proposals by area schools that look to the future of affordable housing. A fourth piece added to the exhibition is a wall filled with a smattering of photos (below-right) by NYCHA residents as part of the Project Lives program. The most interesting part of AHNY, at least for an architect like me, is the second piece, the models, which I focused on with my smartphone. While sociologist David Schailliol's excellent photographs hung on the walls of the gallery literally go inside the apartments of the families living in the affordable housing, the well-made models enable people to delve into the layouts and compare the ten projects that AHNY focuses on. For many New York residents, affordable housing is something seen from the outside; AHNY goes inside to reveal what is happening behind the facades. 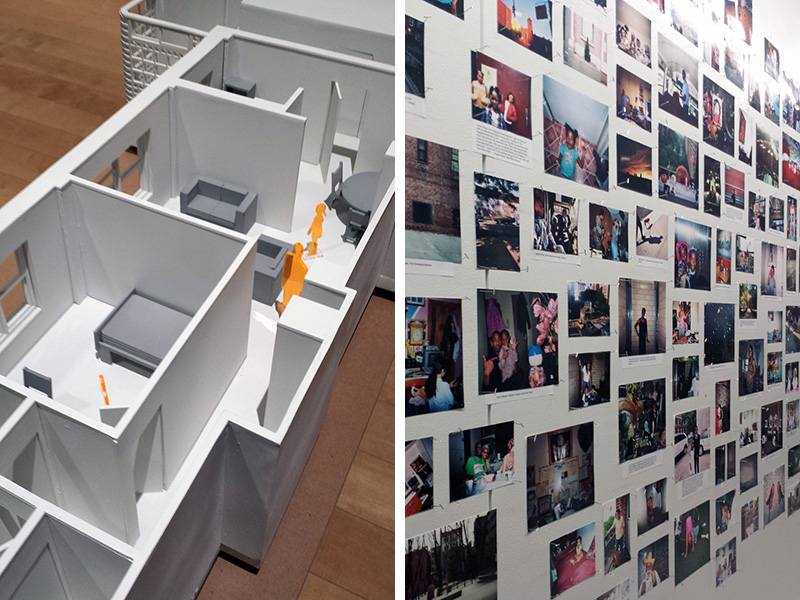 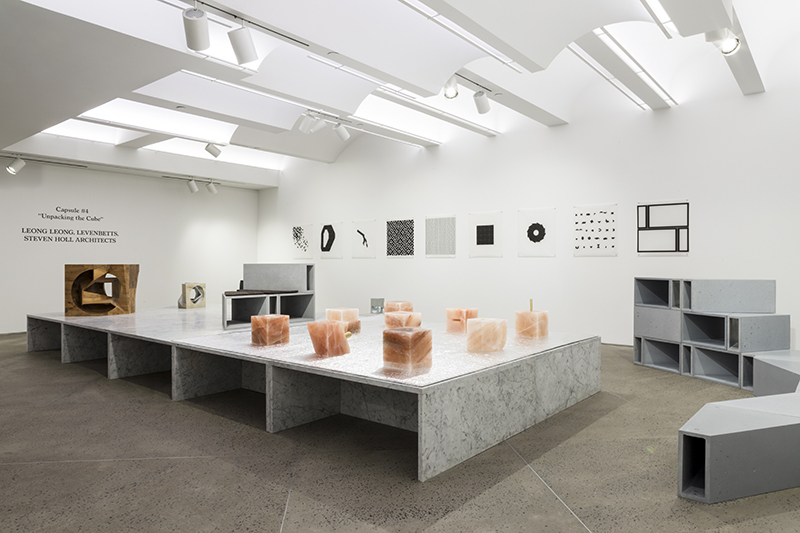 Andrew Zuckerman, curator of Collection #2 “Human | Nature” in collaboration with Chamber, approached three architecture studios, each at different points in their professional trajectories - LEONG LEONG, LEVENBETTS, and STEVEN HOLL ARCHITECTS - prompting the architects to reach into the conceptual roots of their practice and convey them via physical objects for the exhibition space.

The results of their inquiries approach the idea of fundamentals from different perspectives, focusing on social exchange, spatial concerns, and conceptual experimentation. In distinct ways, their proposals depart from and adapt the essential form of the cube, and propose different answers to the question of whether and how it is possible to collect architecture. 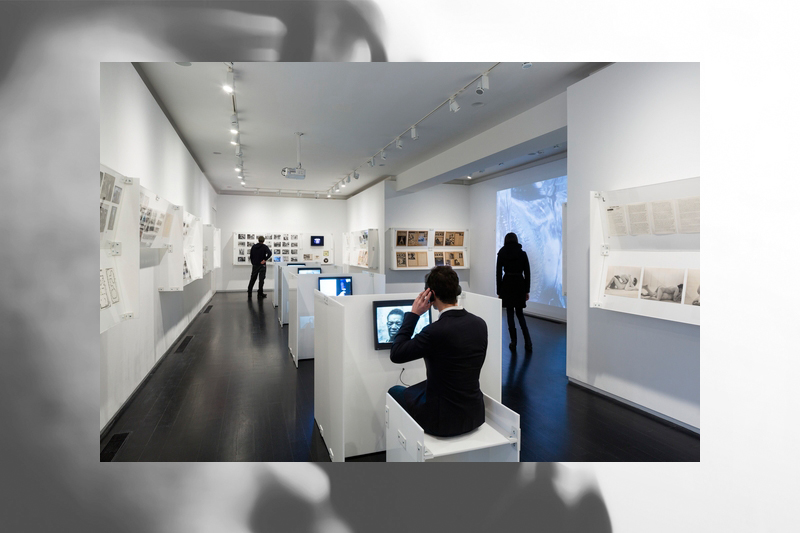 
Les Levine: Bio-Tech Rehearsals, 1965-1975 revisits the early, multi-faceted practices of Irish-Canadian artist Les Levine (b. Dublin, Ireland, 1935). Drawing extensively from the artist’s archive, the exhibition brings together his: early plastic disposables; remote-fabricated, systems-oriented, and “real time” environments; cybernetic sculptures, audio-surveillance, and other “body control systems” works. The exhibition screens sixteen of Levine’s early video projects ranging from Bum, a 1965 chronicle of the lives and testimonies of men living on New York’s Bowery, to later pieces, such as Landscape II, in which Levine directs and manipulates live editing effects within a television control room. Across Levine’s video experiments and in the audio pieces, press releases, posters, postcards, publications, photo-documents and other print-based works on display, the exhibition finds the artist examining, deploying, and interrupting different facets of information flow, the logics of which he understood intimately from his early work as a process designer. Indeed, in 1968 Levine was heralded by critic Jack Burnham as, “the most consistent exponent of a systems esthetic.” His often-ironic engagement with the technologies and material products, as well as the post-Fordist systems and operations of the contemporary media-technical apparatus was directed both to the art world and to what he termed “living patterns.” His work consistently spoke to ambivalent mechanisms of institutional, environmental, and subjective regulation.
 
Les Levine: Bio-Tech Rehearsals, 1965-1975 returns to this early decade of Levine’s work, excavating rarely shown works and documents and demonstrating his connection not only to Burnham but to Gregory Battcock, William Burroughs, James Lee Byars, John Giorno, Jill Johnston, Charlemagne Palestine, and others. The epistemic nexus of industrial and information technologies with conceptual and institutional strategies that Levine forged during these decades retains a haunting contemporaneity as artists and designers continue to struggle with the shifting vicissitudes of an expansive apparatus of pwer.

The exhibition is curated by Felicity D. Scott, Associate Professor and Mark Wasiuta, Director of Exhibitions, who together direct the CCCP in Architecture Program at Columbia GSAPP. It was designed by Mark Wasiuta and Adam Bandler, Exhibitions Coordinator. Florencia Alvarez acted as assistant curator.