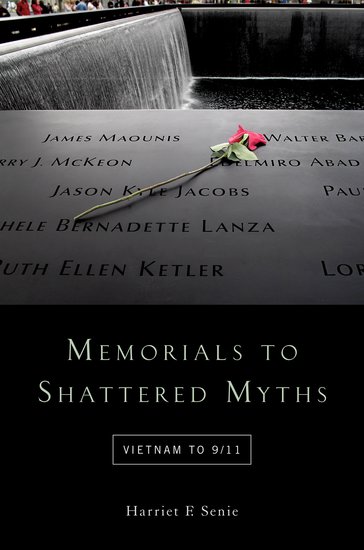 Before a review copy of Harriet F. Senie's new book arrived in the mail recently, the only book I'd read by the City College art history professor was The Tilted Arc Controversy: Dangerous Precedent? from 2002. That book was a must for a paper I wrote in graduate school on Javits Plaza, which was home to Richard Serra's Tilted Arc before it was graced by curlicue benches designed by Martha Schwartz (its latest incarnation was designed a few years ago by Michael Van Valkenburgh). That exhaustively researched book tackles the creation and reception of public art, so it makes sense that just over a decade later she focuses her attention on memorials, what are really another form of public art.

The two projects that bracket the book are mentioned in its subtitle: the Vietnam Veterans Memorial (VVM) in Washington, DC, designed by Maya Lin and inaugurated in 1982; and commemorations of 9/11, particularly the annual Tribute in Light and the permanent National September 11 Memorial, aka Reflecting Absence, the competition-winning design by architect Michael Arad with landscape architect Peter Walker. The VVM and 9/11 memorials are strongly linked, particularly in their abstract formal languages and in Lin, who won the competition for the first while still a student at the Yale School of Architecture and who served as a jury member on the second. In between are chapters devoted to memorials for the Columbine shootings and the bombing of the Alfred P. Murrah Federal Building in Oklahoma City, as well as one on "immediate memorials," which include celebrity displays but also more localized tributes to those killed "in the street, workplace, and school."

The inclusion of immediate memorials is one of the most unique aspects of the book, which focuses otherwise on official memorials, but I was drawn most to the Vietnam and 9/11 chapters, since they are the only permanent memorials in the book I've seen in person (additionally, I saw the traveling mini-VVM on tour in Chicago before seeing it in person on DC). Senie's research and analysis sees these two memorials, as well as Columbine and Oklahoma City, as quasi-cemeteries: public places for private grieving. With this approach, which started with the VVM, the victims overshadow the events – the war, the terrorist acts, and shootings – that caused their loss. The descent and rise of the two VVM walls parallels the escalation and denouement of the "conflict," while the names on the wall function like markers on a grave. In Lower Manhattan, the footprints of the 9/11 Memorial pools reference the lost towers, while the below-grade museum reenacts that horrendous day without, as Senie points out, going into "the causes of the plot."

In DC and NYC, simplification of expression seems to coincide with the simplification of history, turning complex events into easily digestible good/bad scenarios (the named victims this memorial recognizes were good, the unnamed people who put them there are bad). One could argue that more figural tactics to memorial designs – those often espoused by neoclassicists, who won out with the WWII Memorial on the Mall in DC – would have reversed this result, but the later addition of statues next to the VVM and their obvious lack of popularity relative to Lin's memorial, signals this probably wouldn't have been the case. Simply put, the VVM and later memorials are modern(ist) attempts to reconcile loss with confusing and complex circumstances. Senie's book reveals, among other things, that permanent memorials need to embrace this confusion and complexity so they are more than just markers of death; they could be places of hope where the future learns from the past.