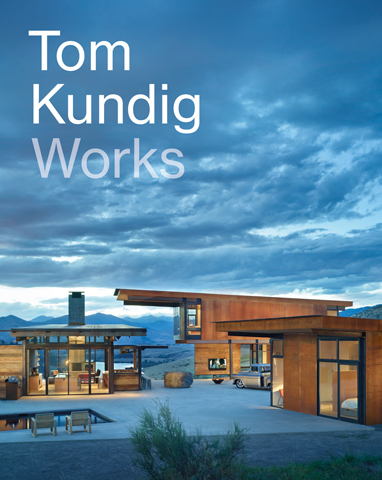 With each book that Seattle architect Tom Kundig puts out with Princeton Architectural Press there is a jump in scale. Tom Kundig: Houses from 2006 is a fairly modest monograph that presents only five projects across its 176 pages. Tom Kundig: Houses 2, the follow up from 2011, features 17 houses on its 240 larger-format pages. With the same page size as the second book, Tom Kundig: Works notches it up to 19 projects on 300 pages to include commercial and institutional buildings as well as the houses he is known for.

Thankfully the increased size isn't just an excuse to show more and larger photographs (though there is plenty of that here). It allows for more insight into Kundig's working process through conversations with the architect's key collaborators: Phil Turner, Olson Kundig's "Gizmologist"; Jim Dow from contracting firm Schuchart/Dow; and Jack Anderson and Shane Atchison, two of Kundig's clients. Fans of Kundig's architecture will no doubt appreciate the conversation with Turner, but they will also love the numerous detailed photographs of the mechanisms the pair excels at creating. More than just cool devices, the mechanisms are a means of enabling owners and users to interact with their buildings in a physical way, something missing in the drive toward smart homes where operating mechanisms are invisible. The gizmos also allow for some fairly large-scale transformations: closing off the building with Cor-ten steel panels when it's not occupied or, more frequently, opening up the building through operable glass walls.

Beyond the conversations, another ingredient outside of the 19 projects in Tom Kundig: Works is the Tom Kundig Collection, which consists of door handles, drawer pulls and other fittings. Made from bent and rolled steel, Kundig calls the pieces "the moments when the building becomes an active thing that you engage, operate, and become a team with." I like the expression "become a team with," as it echoes what his more complex gizmos accomplish. Just like this monograph, the Tom Kundig Collection allows a wider audience to have the Kundig touch within their home.