As much as I appreciate the design of architecture books, I've never paid too close attention to who's responsible for the actual design of them. But recently I noticed that a number of the books in my library were designed by Massimo Vignelli, who died in 2014 at the age of 83. With his wife Lella and their New York firm Vignelli Associates, he was one of the most popular and versatile graphic designers, responsible for the design of books and magazines, but also interiors, packaging, branding, architectural graphic, furniture, and product design. Here I highlight some of the architecture books in my library that he designed. 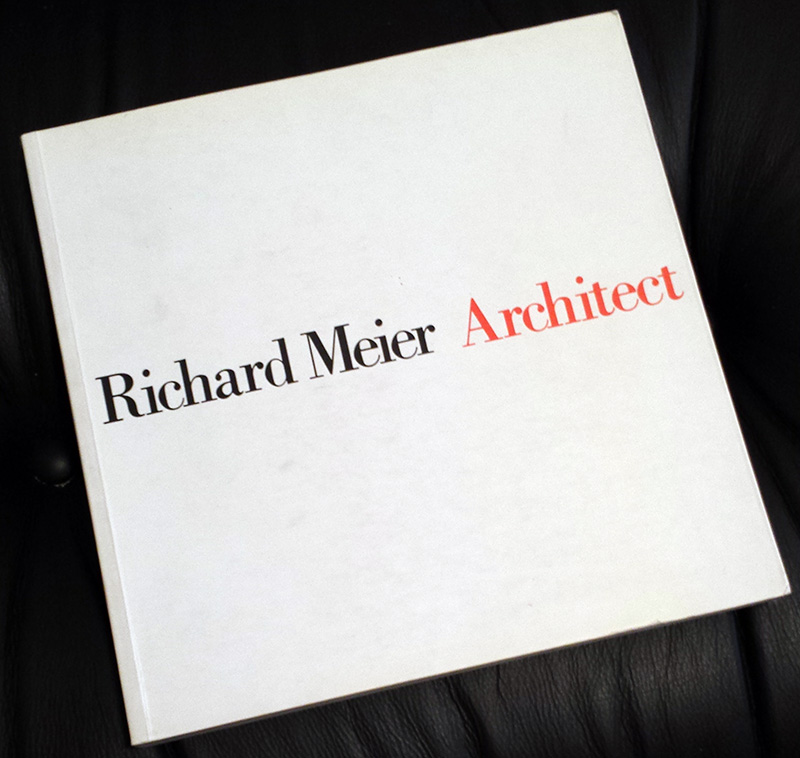 Vignelli designed a series of books with Meier and this was the first one, coming out in 1984. The design, per the Vignelli Associates website, "reflects the character of his buildings: structured, subjective and, above all, not trendy." The cover sets everything up, both for the book's contents and Vignelli's approach to book design in general: three words, two in black and one in red; clear, simple and heavily reliant upon typography for form and effect. Inside, the text has a clear hierarchy that, like the cover, embraces some abundant and carefully positioned white space. The simple and straightforward layout and typography work especially well with Meier's consistent black-and-white drawings. 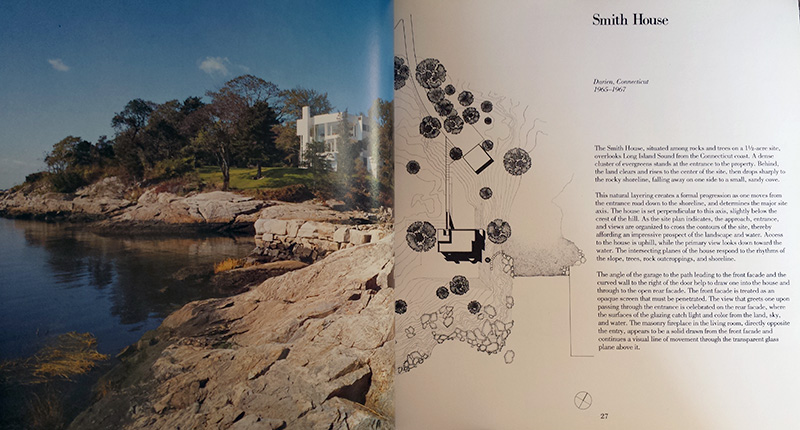 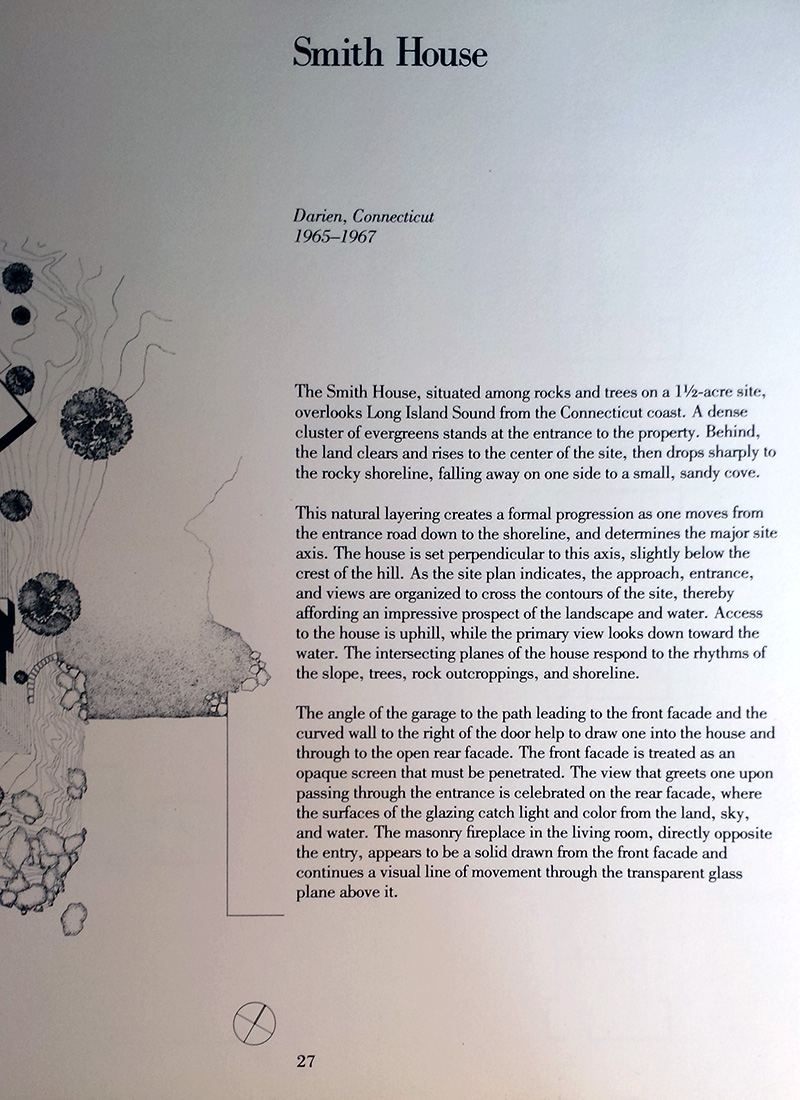 Louis I. Kahn: In the Realm of Architecture: 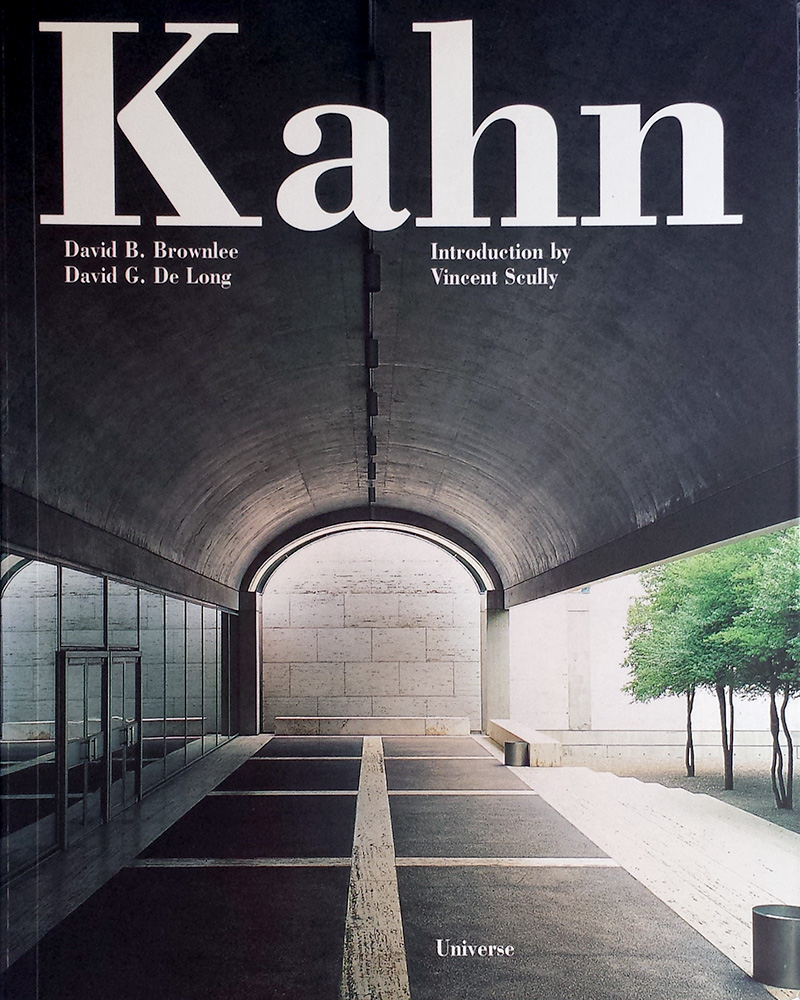 Vignelli's strong use of text is found clearly on the covers of the 1997 compact version, pictured, and the large-format book that came out five years earlier on the occasion of the In the Realm of Architecture exhibition in Los Angeles. On both covers "Kahn" is in large, serif letters: across a solid background in the middle of the large book; and layered over a photo of the Kimbell Art Museum at the top of the smaller book (the large one has "Louis" on the back cover and "I" on the spine, so his name is written out in its entirety). This one-word tactic would not have worked for Meier (his wasn't a household name like Kahn back then), but it gives weight to the Kahn exhibition catalog. Inside, a similar hierarchy to the Meier monograph happens with the text, but with less white space in the compact format that I have. 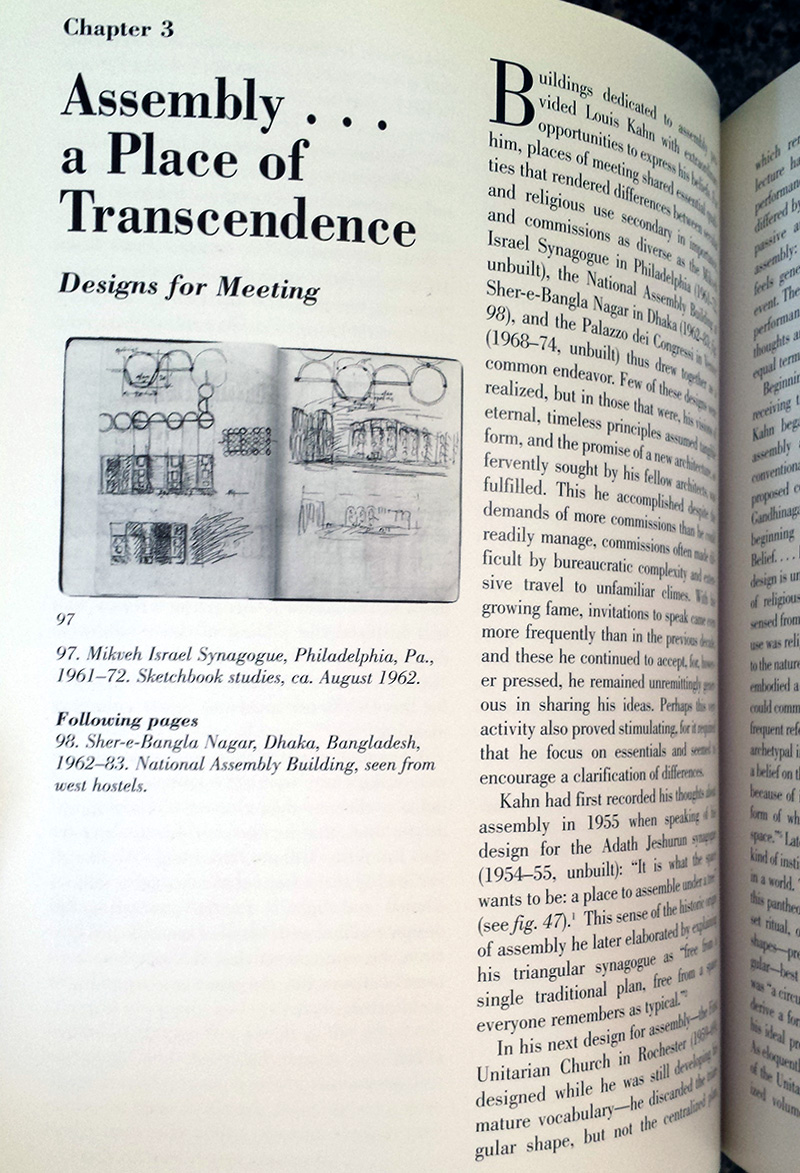 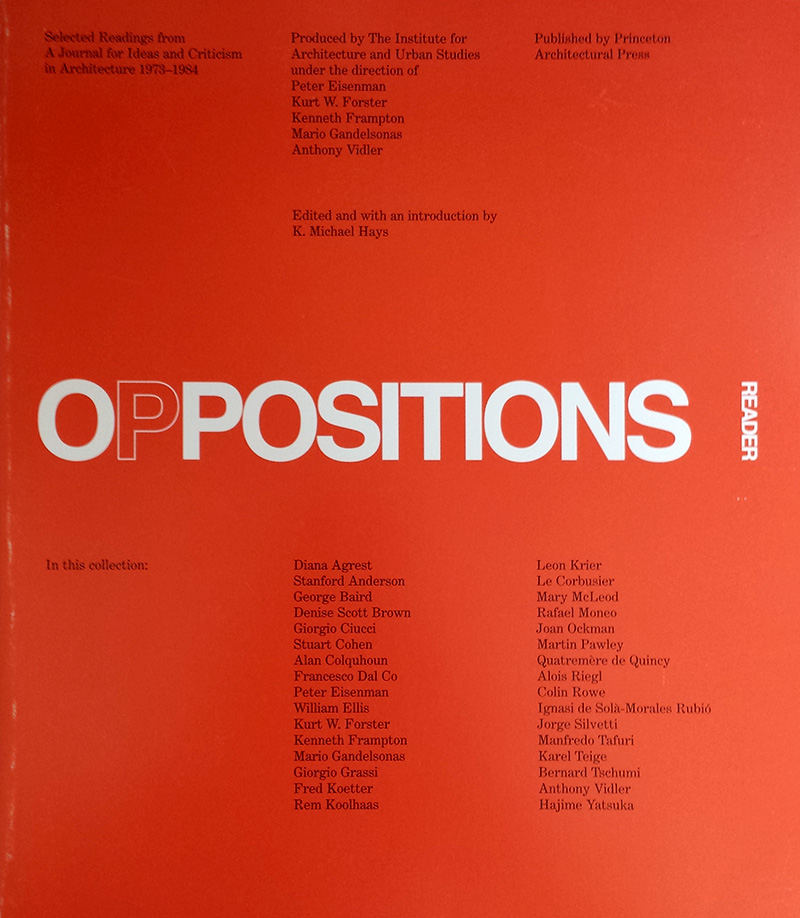 More than monographs and architectural histories, Vignelli is best known in architectural circles for designing Oppositions, "an esoteric magazine published by the Institute for Architecture and Urban Studies" (IAUS), per the designer's website. IAUS functioned from 1973 to 1985, when Vignelli was on the board and donated his design services for their various publications. He wanted a "strong chromotype for the magazine's identity" and that came in the form of the orange cover that was consistent from issue to issue, even carrying forward to the big 1998 reader. Once again, the formal importance of text carried through to the covers, which were basically like a table of contents for each issue. Occasionally the covers had images but often they were just black text on the orange background, with the white, sans-serif, all-caps title standing in sharp contrast – in opposition – to the rest. 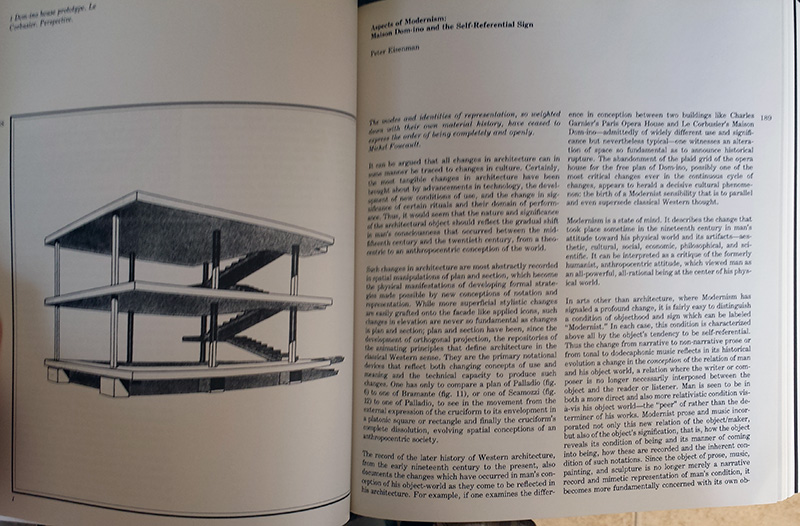 The nearly square format of the pages, also consistent from issue to issue and something that set the journal apart from other contemporary publications, allowed for a two-column layout for text. Even though, as Vignelli's website asserts, "the magazine had more words than pictures," one column of text could give way to images as needed, with the images still being of a decent size. Paragraphs are set justified with an extra break between them and no indentation (compare this with the Kahn book above, which is more traditional). A couple decades later, when I was an editor of the Oz Journal at Kansas Sate, we employed a similar layout for the text, and I'm guessing now that Vignelli was an influence on that. This design lends importance to each paragraph, as if each is a self-contained idea or entity rather than part of a narrative flow; it would never work for fiction, but for "esoteric" architecture and urbanism it makes sense. 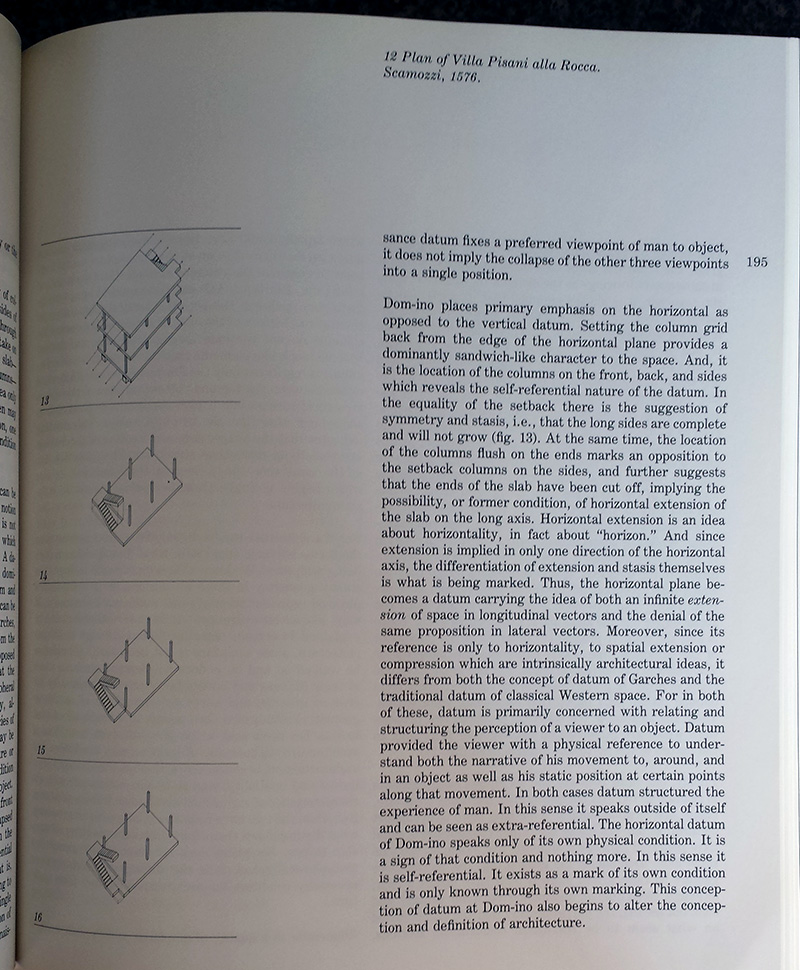 Aldo Rossi's The Architecture of the City: 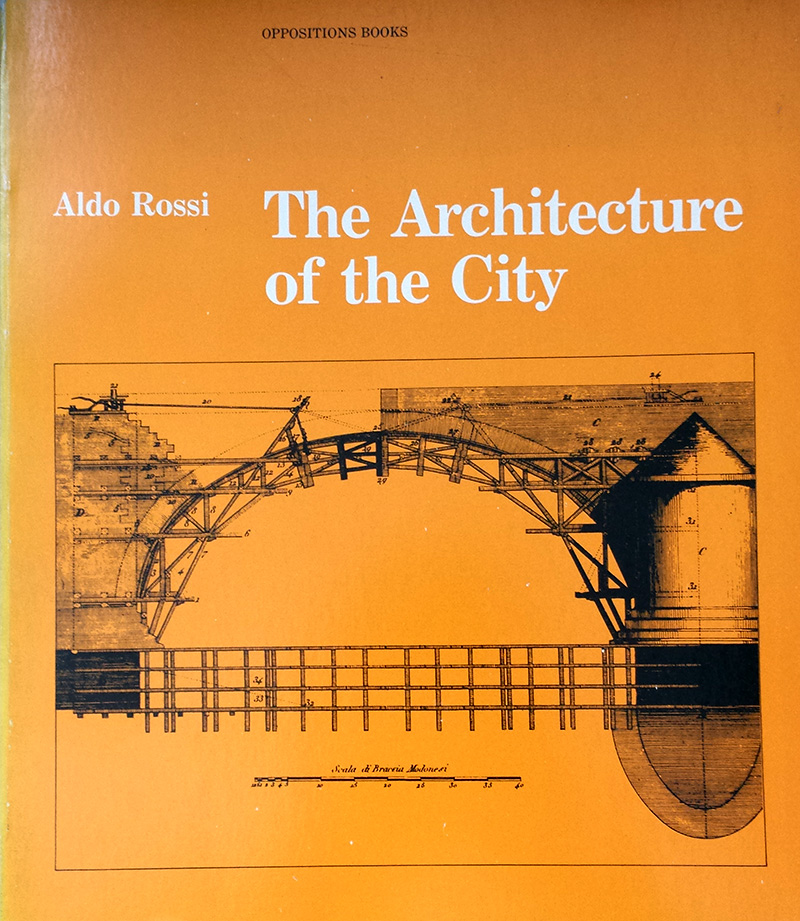 Oppositions put out a series of books, most famously Aldo Rossi's The Architecture of the City and A Scientific Autobiography. Even though the covers are yellow instead of orange and they employ more image than text, they are unmistakably Vignelli thanks to the page size, the white title and the strategic "white space." Inside, the designer employed the same paragraph style as the journal (justified, extra line break, no indent), though in a wider, single-column layout. White space was pushed to the margin, which is where section titles and some captions were located. When images were inserted, they typically took over the whole page, though some were fitted into the narrow margins. 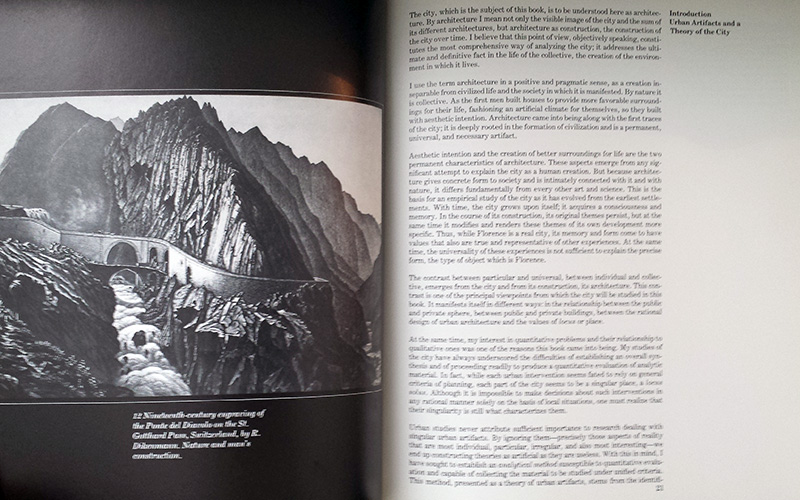 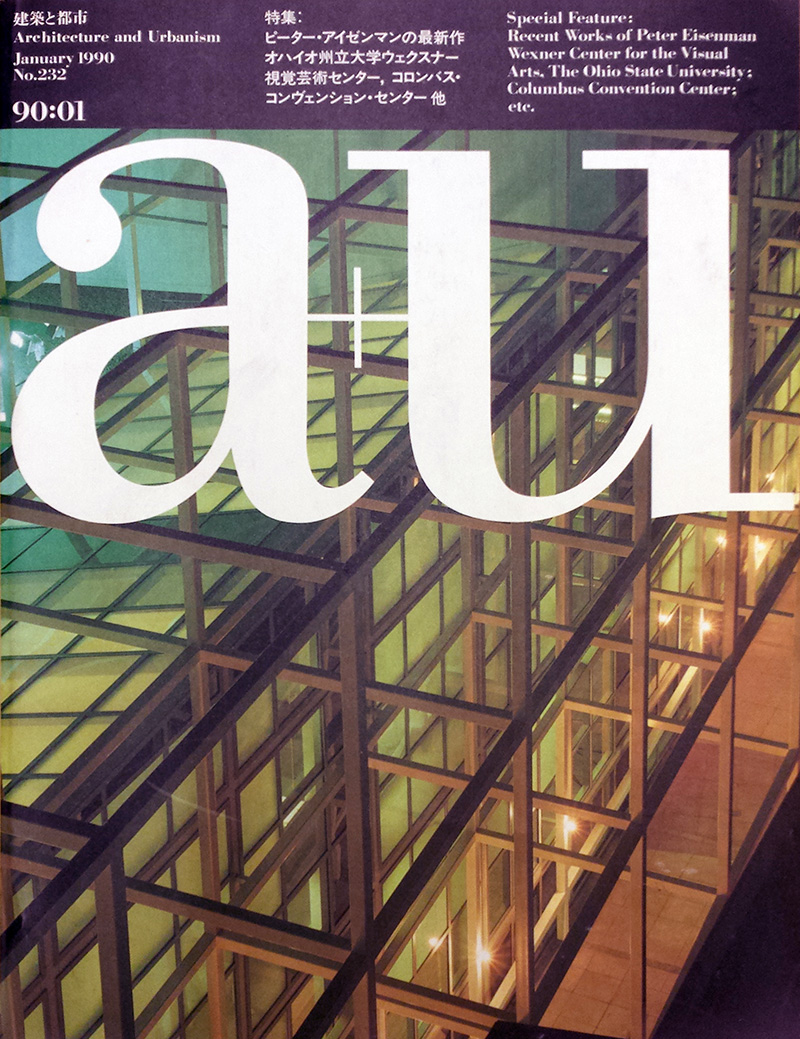 Vignelli designed some architecture magazines as well, and what he did for Japan's A+U in 1990 lasts to this day (in 1997 he redesigned it slightly to signal a change in directorship, moving the horizontal black bar at the top to a vertical one on the right). Compare the cover of the first issue from 1990 (a special issue devoted to Peter Eisenman, harking back to the IAUS) with the previous logo, below. The simple serif font with connecting "+" is a great leap forward from the rounded, pseudo-spacey logo before it. I'm not surprised the magazine has stuck with it, even after they merged with Japan Architect in 2012. 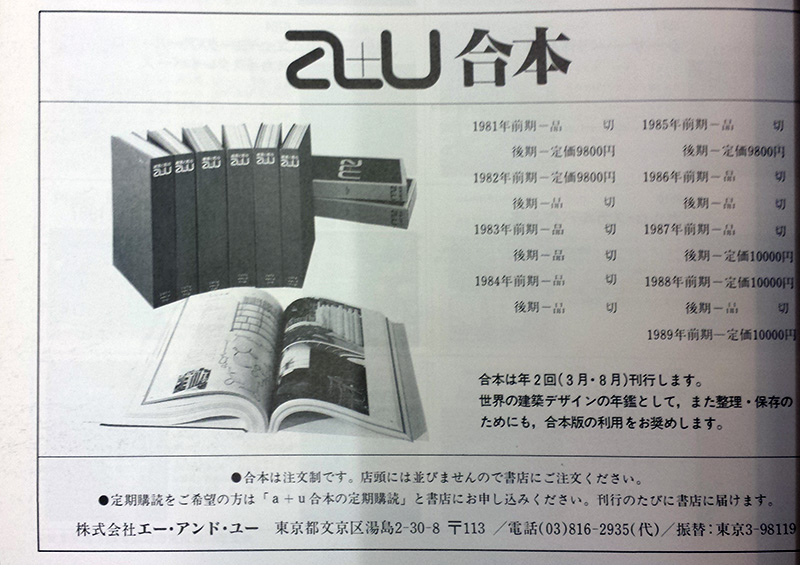 Wexner Center for the Visual Arts, The Ohio State University: 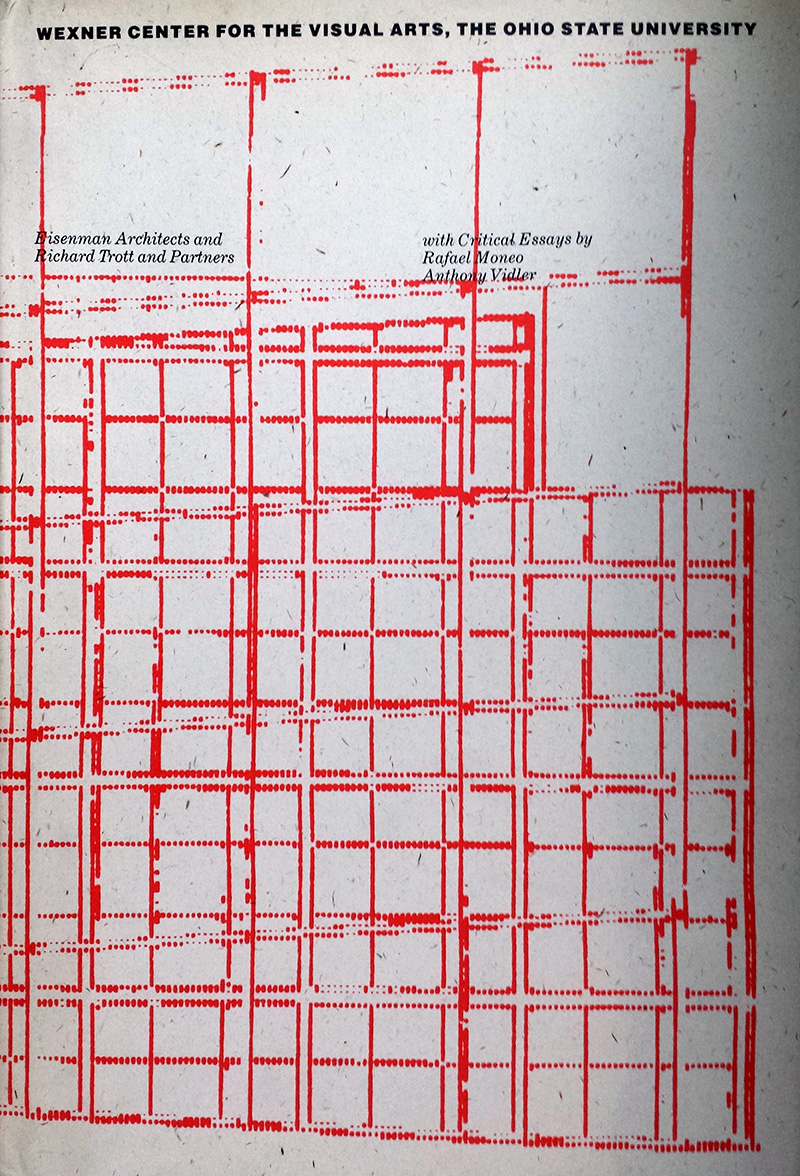 Peter Eisenman's presence continues with Vignelli's design of a book on the architect's Wexner Center in Columbus, Ohio, a book I found at a used bookstore last week (and the impetus for this post). Three things stand out in regards to the book design: its tall format, the choice of rice paper for the dust jacket and all of the pages with the text, drawings and b/w photos (color photos are on a plain glossy paper in the last quarter of the book), and italics used throughout. The first two give the book character, but I'm puzzled by the italics, since it makes reading the large blocks of text a bit distracting or cumbersome. After all, italics is typically used for emphasis or to highlight an excerpt from another source, not to serve as the only type for reading a book. I can only guess that Vignelli took Eisenman's skewed grid of the Wexner Center and applied it to the text, opting for something that always leans. Whatever the case, it goes against Vignelli's claim (again, on his website) that he likes design to be "pragmatically understandable." All of the other books mentioned above owe their understanding to an intelligent selection and articulation of type, but here that gave way to style over substance. Fortunately it is only one flawed instance in an impressive portfolio that used type extremely well to explain and discuss architecture. 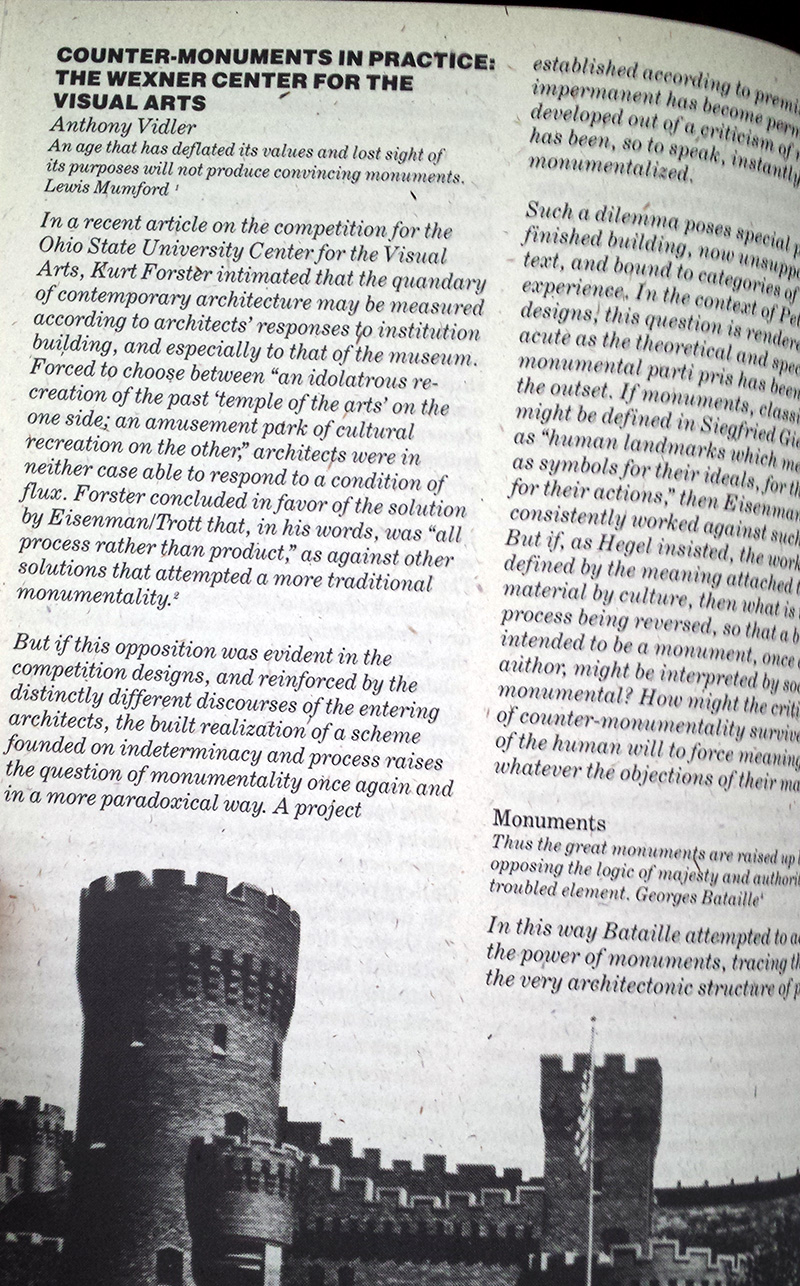