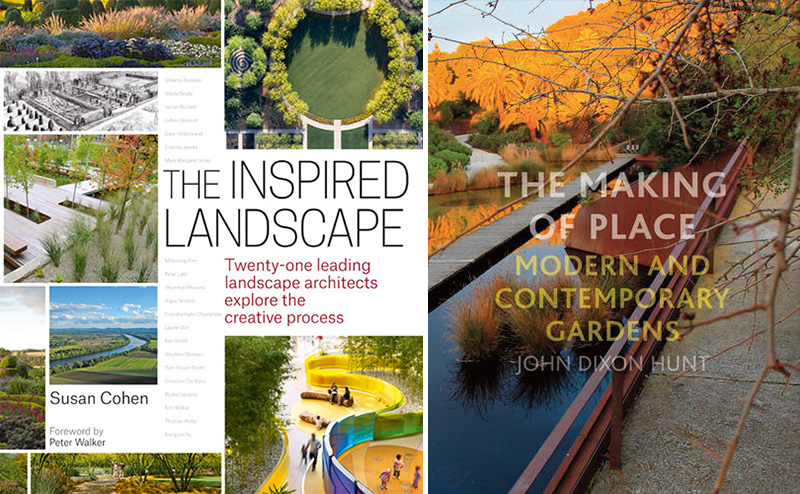 Recently I received review copies of a couple books on landscape architecture: one geared to contemporary practices and the other an overview of modern and contemporary gardens. It seems appropriate to review these together, though I can't place one above the other – both are highly recommended.

Susan Cohen is a landscape architect based in Greenwich, Connecticut, and coordinator of the Landscape Design Program at the New York Botanical Garden; the former has given her firsthand experience with the process of designing and realizing landscape designs, while the latter has exposed her to many of the biggest names in the profession. Both inform her book The Inspired Landscape, which collects 22 projects by 21 landscape architects to, as the subtitle makes clear, "explore the creative process" of designing landscapes. Each architect's work is explored through one case study, but in the case of Kongjian Yu of China's Turenscape, Cohen "could not resist using two projects that were very different from each other but both inspired by his farming childhood," as she told me in a short interview at World-Architects.

The list of architects is an impressive one: James Burnett, Gilles Clément, Gary Hilderbrand, Charles Jencks, Peter Latz, Laurie Olin, Ken Smith, and Thomas Woltz, to name just a few of the more familiar names. Each chapter on the architect/project starts with a synopsis of their inspiration, which gives some hints as to what follows. The text mixes Cohen's descriptions with quotes from the architect, while the photographs are clearly captioned, with those of the project but also of precedents that served as inspiration. I was glad to learn the inspiration of, for instance, Clément's garden next to Jean Nouvel's Musée du Quai Branly (savannah ecosystems) and Latz's well-known Parc Duisburg Nord in Germany (the legend of German king Barbarossa and the Greek myth of Ariadne and Theseus), but to an even greater level I appreciated learning about architects I was not previously familiar with.

One new name for me was Sheila Brady, a principal at OvS. Brady's project is the Native Plant Garden at the New York Botanical Garden in the Bronx, a garden I'd seen for the first time in person not long before receiving Cohen's book (my photo below). Though I was able to determine with my smartphone at the time that OvS designed the newest addition to the Botanical Garden, it was not until opening The Inspired Landscape that I ascertained Brady's role and her inspirations (the sculptures of Martin Puryear and the paintings of Joan Mitchell). Immediately I thought of how historically, as in the architecture of buildings, women have often been omitted or overshadowed by their male counterparts in credits of landscape design. In this case, it's not enough to label it an OvS landscape; to be accurate Brady's leadership role in the garden's design must be part of its explanation. This is but one commendable aspect of Cohen's book.

John Dixon Hunt, Professor Emeritus at Penn Design, is one of the most prolific landscape historians around, the author of dozens of books on the subject. Although this is the first book by Hunt I've encountered, I've read a number of his essays; pick up a collection of landscape essays and most likely he contributed to it. This makes sense given Hunt's voluminous knowledge of the history of landscape design, his strong handle on contemporary practice, and the critiques he levies on designs, books (his roundup of recent books in Harvard Design Magazine #36, "Landscape Architecture's Core" comes to mind), and other output of landscape architects and academics. His is a critical voice that is much-needed today when information is unending but criticism is scarce.

Strong positions on landscapes are found throughout The Making of Place, which covers roughly 100 years of gardens typologically rather than chronologically. Hunt provides a baker's dozen of chapters: domestic gardens, garden festivals, parks, campuses, memorial gardens, botanical gardens, and sculpture gardens, to name a few of the more common types. He also includes less conventional types: drosscapes, reinvented gardens, and gardens on paper. The inclusion of these chapters (coming at the end of the book, not surprisingly) give the book a strong focus on the contemporary, since landscape architects today must contend with polluted industrial sites and existing gardens, as well as the fact not all of their projects will be realized but nevertheless inform their other work and broader practice.

Even more than Cohen's book, The Making of Place taught me about many architects and projects I was not aware of, thanks to the discussion of what I'd wager is at least 100 gardens. Not all of the places are masterpieces nor are documented with some of the many photographs provided, but this is where Hunt's critical voice is most important: his commentary expresses what is important about each garden; what can be learned from them; and how they have influenced subsequent landscapes. Unlike other Hunt books, which are geared to people with an existing knowledge of landscape history and theory, this book is rewarding for those who might not have a heavy background in garden design but bring with them a strong interest in the subject.