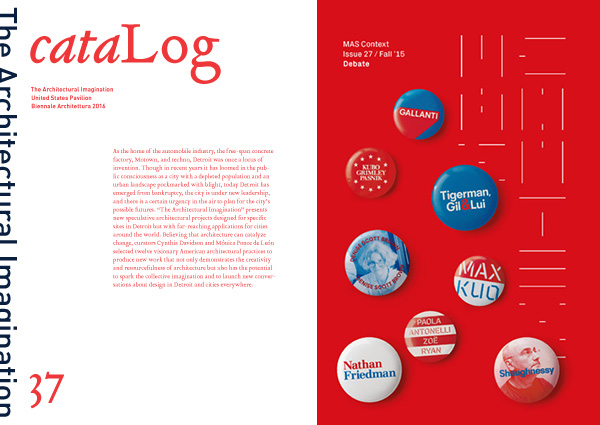 Log 37
In June 2015, the University of Michigan’s Taubman College of Architecture and Urban Planning, with curators Cynthia Davidson and Monica Ponce de Leon, were selected to organize the U.S. Pavilion at the 2016 Venice Architecture Biennale. Ponce de Leon was dean of Taubman at the time (now she's dean at Princeton) and Davidson is best known as the director of the Anyone Corporation, which hosted and published the ANY symposia and books back in the 1990s, and now publishes Log. Therefore it's not surprising that the official catalog of the U.S. Pavilion is published by Anycorp and playfully worded as cataLog.

In addition to presentations of the twelve projects that make up "The Architectural Imagination" – the pavilion's attempt at sparking debate around the future of Detroit through speculative architectural projects by the likes of Greg Lynn, MOS, and Stan Allen – the 37th issue of the thrice-yearly Log includes essays by the curators, as well as Robert Fishman (interim dean at Taubman), a couple names that will be familiar to regular Log readers – K. Michael Hays and Sylvia Lavin – and a few others. The issue is most valuable as a documentation of the pavilion and its twelve projects, but also for contextualizing the pavilion through Davidson's and Fishman's essays – on "The Architectural Imagination" theme and Detroit's history, respectively – and grounding it in some practical issues. The last comes primarily from an interview with the curators and Maurice Cox, the director of the City of Detroit's Planning and Development Department; here the economic, social and racial issues that Detroit faces come to the fore, issues that are buried beneath avant-garde architectural forms in the projects.

MAS Context 27
The 27th issue of MAS Context, the quarterly journal overseen by Chicago architect Iker Gil, takes as its theme "Debate," focusing on "ones that have taken place as well as ones that should take place." It's a timely theme, given the lengthy presidential campaign that started before the issue even came out last fall, but also with the debates that have fired up around architecture in recent years, most notably in regard to gender and income equality. Of all the copies of MAS Context I have in print (all of them can be downloaded as PDFs, it should be noted), this one is the biggest – or at least it looks the biggest thanks to some thick pages. Whatever the case, it's clear there is some passion around the theme, not to mention some great contributions inside.

The issue starts, appropriately enough, with an essay by a few members of The Architecture Lobby, "an organization of architectural workers advocating for the value of architecture in the general public and for architectural work within the discipline." The essay comes with a list of demands ("enforce labor laws that prohibit unpaid internships," "enforce wage transparency," etc.) but also some sobering statistics about unpaid overtime and the need to supplementary income. An essay by Denise Scott Brown logically follows: "Room at the Top? Sexism and the Star System in Architecture." Even though it was originally penned in 1989, her prescient words ring all too true today.

With MAS Context based in Chicago and the issue focused on debate, Stanley Tigerman was bound to make an appearance. And there he is, near the middle of the issue, interviewed by Iker Gill and Ann Lui. It's typical Tigerman – "mean, tough, straightaway" – and is issue's must-read. Other highlights in Debate include Zoë Ryan's interview with MoMA's Paolo Antonelli about design and violence; Chris Grimley, Michael Kubo and Mark Pasnik's compilation of statements about Brutalism, what they call "Heroic"; photos and text on Dennis Maher's intricate Fargo House; and Christina Shivers's Vocalization Machines, a project that looks like it could be its own Pamphlet Architecture.

The most recent issue of MAS Context is number 28, Hidden, which "explores the aspects of our built environment that are hidden, overlooked, not readily apparent, forgotten, and conceptually of physically removed from our sight, whether intentionally or not." Like the other issues, it can be downloaded in PDF form via the MAS Context website.