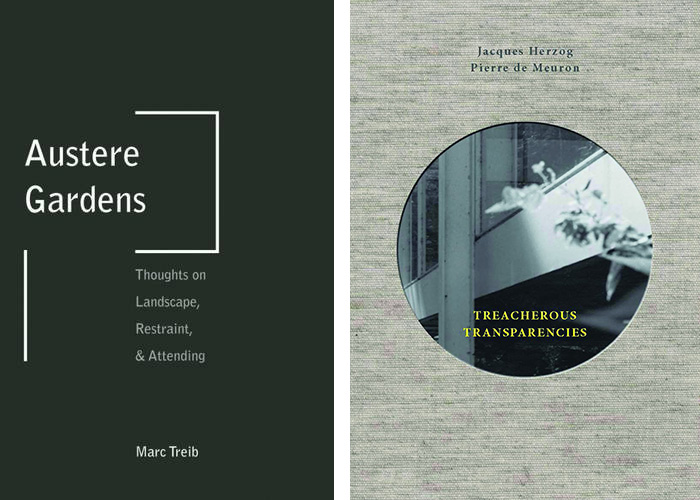 Does architectural theory – the definition of principles that can be applied toward architectural projects – still exist? Or has it been replaced by longform articles that expound on an author's take on something: history, current events, technology, practice, whatever they fancy? One could argue that architectural theory, in the 1990s sense of the term, died with the shuttering of Assemblage in 2000, which also coincided with the last ANY conference (during the conference Peter Eisenman stated "Theory is dead"). Of course, the esoteric, post-structuralist strand of theory isn't the only one out there, so proclaiming theory as dead is a bit like saying TV is dead because everybody is streaming online. There's still theory, it's just...different. Nevertheless, writing and talking about architecture – and in the case of one of these books, landscape – is not as popular as producing something: buildings, landscapes, renderings, diagrams – anything else besides words. So it's refreshing to come across these two books that exist somewhere between theory and longform, or whatever else prevails today.

Both of these books clock in around 100 pages. That each has plenty of photographs means the number of pages that require reading is about half. So these are books that can be read easily in one day – on a plane ride even. If they were written by younger folks, they'd probably be posted to Medium or some other online platform where fans of longform congregate. But these books would not be written by youngsters, since each author brings their decades of experience to bear on their subjects.

Marc Treib, Professor Emeritus of Architecture at UC Berkeley, has written so many books on landscape architecture I'm often amazed to find books on the subject not written by him (a scant 16 "selected publications" are listed on his UC Berkeley profile). Many of these books are histories of particular designers, periods, or styles in landscape architecture, with a strong emphasis on the modern era. With this fount of knowledge, his "thoughts on landscape, restraint, and attending" reach across centuries, countries, and even disciplines. He does not limit himself to landscapes shaped by architects; he brings art into the fold as well as a few marks upon the land that are practical or vernacular rather than designed or artistic. This happens because the goal of Treib's text is changing how readers look at their surroundings. Sure, he embraces Japanese dry and moss gardens (what must be the ultimate forms of landscape austerity), but he does not propose that all landscapes follow their principles. Instead, he shares his perspective on approaches to landscape design that are restrained yet powerful, which makes perfect sense in our resource-strapped, over-populated world.

Swiss architect Jacques Herzog and Pierre de Meuron, who are seven years younger than Marc Treib, won an inaugural MCHAP award from IIT in 2014 for 1111 Lincoln Road in Miami. In Chicago in October of that year for the award symposium, the duo visited Mies van der Rohe's nearby Farnsworth House alongside IIT dean Wiel Arets, fellow MCHAP winner Álvaro Siza, Chicago architect Dirk Denison, and MCHAP jury chair Kenneth Frampton. That visit, and the recorded conversation that took place inside the house, were the impetus for Treacherous Transparencies. As the title hints, Herzog, who wrote the text, and De Meuron, who took the photos, are not smitten with Mies's architectural statement.

Like Treib, Herzog & de Meuron embrace the art world in their book. This is no surprise, given the duo's overt appreciation of art and the numerous commissions they've undertaken with artists. In the book the embrace takes the form of analyses of five artists/works alongside a longer analysis of the Farnsworth House. Given that the book started as a conversation, and then was filtered through lectures before becoming a book, the text is fairly conversational: it is insightful but hardly academic; assertive yet not preachy. Ultimately it serves to deflate the pedestal that Mies has been propped upon for decades, by looking at one of his masterpieces through a different lens. Herzog concludes that artists had more to say – or more interesting things to say – about transparency than Mies. This would have been unheard of during the deanship of Donna Robertson or any other dean at IIT before her, but with Arets at the helm it makes sense. It is also apparent that, like theory, the principles espoused by Mies have waned in favor of...something else. Treacherous Transparencies is one way of figuring out what that something else is.