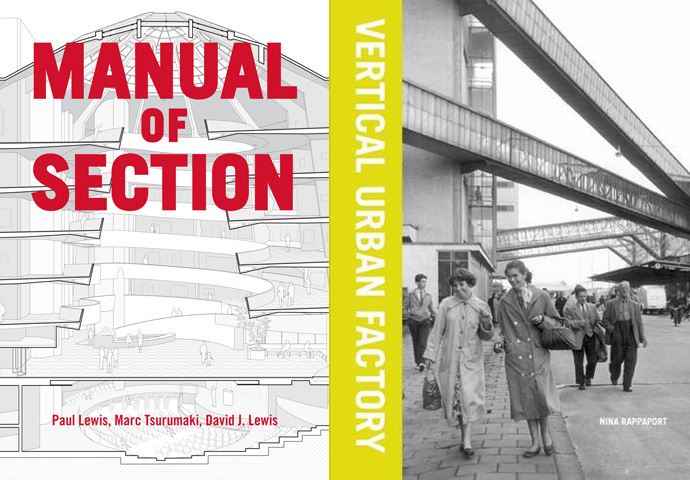 It must seem odd to see these two books together in one post. One is a book on an architectural drawing – the section – and its role in architectural production. The other is a book on a particular strand of industrial buildings: factories in cities. Yet when we consider one important aspect of sections – the stacking of floor one on top of the other – it makes sense to put these books together. After all, what is a "vertical urban factory," as Nina Rappaport calls it, but a large horizontal factory cut up into smaller floors and stacked upon each other? Further, although the folks at LTL Architects include all sorts of different project types in their section manual, most of the buildings are in urban areas, where stacking is necessary due to constraints of space and economic demands. Yet even though I'm choosing to put these books together in one post, I'll review them separately rather than trying to delve too much into any more similarities or contrasts.

[The Lewis brothers and Marc Tsurumaki | Photo via LTL Architects]

If anybody should author a book on building sections, it's architects David Lewis, Marc Tsurumaki and Paul Lewis, better known as LTL Architects. Ever since their Pamphlet Architecture, Situation Normal... (when I and many people first became acquainted with the New York firm), their output has prized sections, both in terms of drawing and in the spaces they create. The last twenty pages of Manual of Section, in fact, is made up of their own projects, spanning from 1997 to 2015. But most of the book is devoted to spreads that feature one building, cut into section, its spaces and context receding in a one-point perspective. This last point is important, since it goes well beyond what architects draw as sections and therefore makes the book visually brilliant, recalling Atelier Bow-Wow's amazing section drawings. 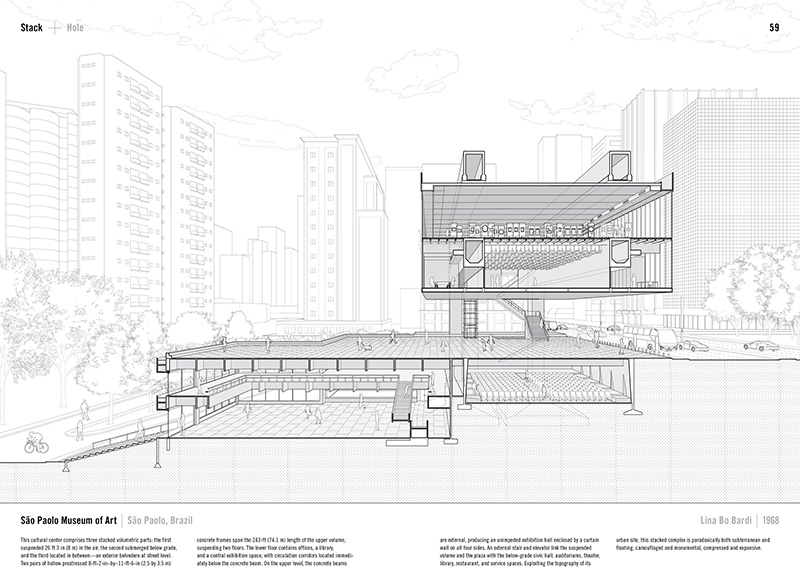 Following an in-depth introduction on the history of the section and the explanation of different formal types, the authors organized the 63 projects into eight chapters based on these types: Extrusion, Stack, Shape, Shear, Hole, Incline, Nest, and Hybrids. It's obvious – and the authors admit so – that buildings do not fit neatly into just one type. Lina Bo Bardi's São Paulo Museum of Art, for instance, is found in the Stack chapter, but as can be seen in the spread above, the "+ Hole" indication is included in gray in the top-left corner. So most of the projects can then be seen as hybrids, but putting them into different chapters allows the focus to be put on special aspects of each design, particularly in regards to the role of the section. I'd argue that the hole of Bo Bardi's plaza, the hole, is more important than the stacking (the authors contend the open plaza is but one part of the stacking), but I'm just glad to see this building drawn so beautifully, showing both the above- and below-grade portions at the same time. And this gets at the power of the section and one appeal of this book: since these two realms of the museum can not be experienced at the same time, they exist together only in the section.

I should point out that PAPress did a great job with finding a suitable physical form for the book. Anybody who owns architecture books, particularly monographs, knows the frustration of broken bindings that come from opening up books to see photos and/or drawings that are spread across the fold. Since all of the sections in Manual of Section fill two-page spreads, the book has been made to allow it. Flip to any page and the book lays flat, without any need to force it. Even though these digital drawings (done by 25 individuals who were not, as the authors point out, unpaid interns) would probably yield further joys when zoomed in on a screen, this is a case where the content and the physical book have found a remarkable synthesis. 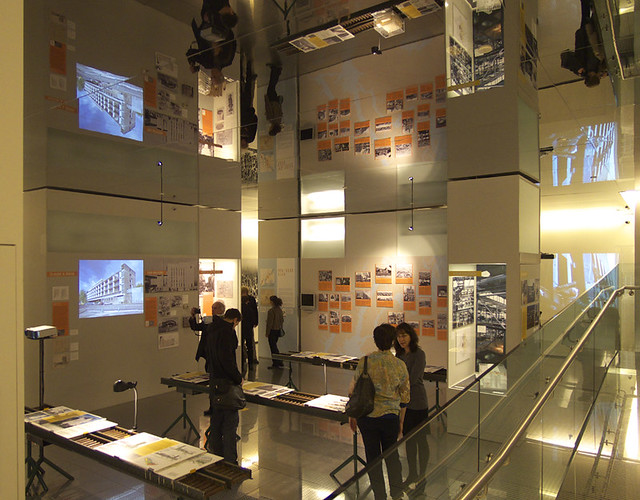 Vertical Urban Factory began its life as a design studio and then an exhibition curated by Nina Rappaport in 2011. What was as an ambitious show presenting innovative modern and contemporary urban factories grew in ambition over time as the exhibition traveled to Toronto, Detroit, London, and Lausanne, Switzerland, and then was put into book form five years later. With histories of urban factories, considerations of the economic and social aspects of industry, and speculations on the future of vertical urban factories, among numerous other things, Rappaport's book is much more than a documentation of the exhibition and its projects. It is as thorough a document on the phenomenon she discerned and independently researched as could be expected. 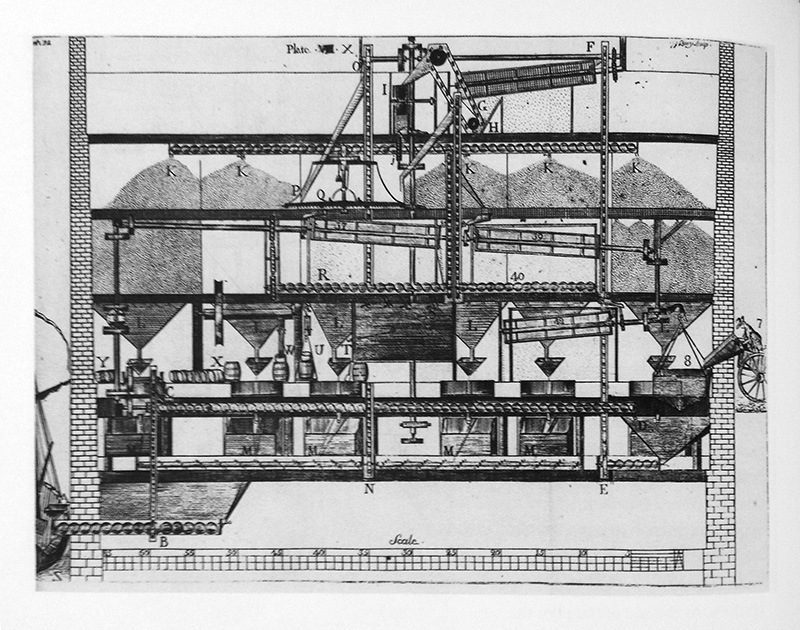 At nearly 500 pages, Vertical Urban Factory is a hefty book that, even with loads of illustrations (historical photos, case studies, diagrams, etc.), is primarily text. To combat the daunting task of reading it cover to cover, the book is organized in three main sections (Modern Factory, Contemporary Factory, Future Factory) and further subsections that invite digesting the book in smaller chunks. Additionally, case studies on historical and modern factories are set off from the rest of the text through light-gray pages; people who want to look at factories with capital-A architecture can jump to these sections. A couple portions also exist to present some information in the form of diagrams: a 22-page timeline at the beginning of the book puts the factory in context by presenting buildings but also relevant technologies, cultural events, and even management strategies; near the end are ten pages of process diagrams that illustrate the global flows of production, be it with iPhones or even Steinway pianos. 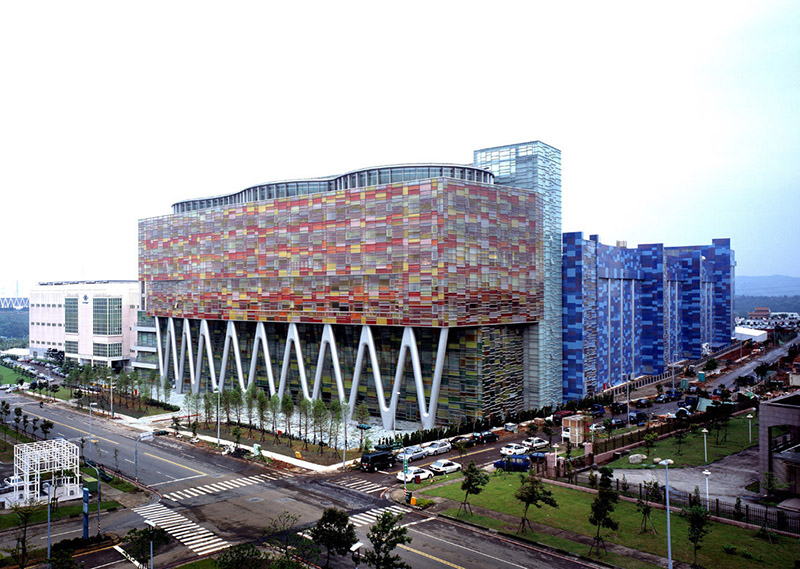 What might be the most important part of the book is the smallest: Factory Futures. Rappaport did not research and exhibit vertical urban factories in a purely historical manner; these places exist. Still, something needs to be done to ensure the integration of industry in cities. Should all neighborhoods, through gentrification, eject factories to he suburbs and hinterlands? Not all factories are the same (heavy vs. light being the most obvious), but it's all too common that a typology with origins in the city is unable to survive there anymore. Economics is surely a factor, as is NIMBYism; but would the latter be an issue if urban factories looked like Inotera's factory in Taipei, above? Or if all places took pride in what they produced, such as with Steinway pianos in Long Island City, Queens? This is just one way of looking at the things, but it's clear from this ambitious book that Rappaport sees social and cultural value in vertical urban factories. Perhaps those with the fortitude to read Vertical Urban Factory will come over to her way of thinking.