When people look back on 2016 sometime in the near future, one way they may view it is as the "Year of Planted Bridges." There's the ongoing saga of Thomas Heatherwick's Garden Bridge in London but also a bevy of proposals that incorporate this architectural element. 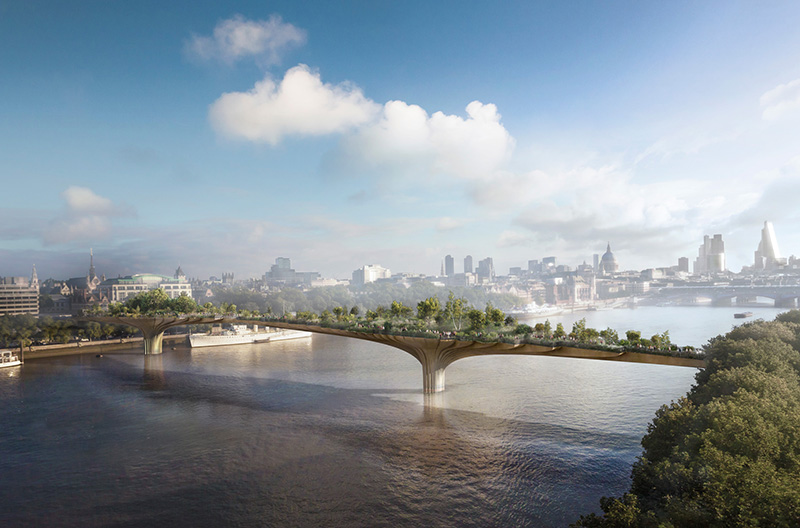 Heatherwick's proposal under former London Mayor Boris Johnson is now in limbo under the administration of Mayor Sadiq Khan, who is anything but in love with the project. Some reports ask if the £185 million bridge is "dead in the water," while some architects have proposed alternatives, namely Allies and Morrison's suggestion to turn the existing Blackfriars crossing into Blackfriars bridge garden. 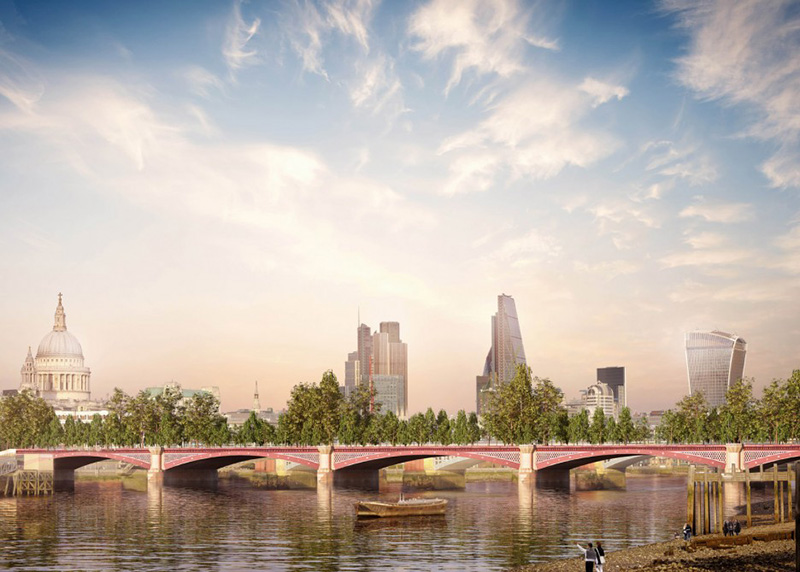 Even if Heatherwick's high-profile proposal is mired in problems (most of it around funding), the idea of a planted bridge is desirable, enough to elicit such proposals as Blackfriars. I attribute the sudden urge to plant trees on bridges to New York's High Line, which is basically a 1.5-mile-long planted bridge traversing 22 blocks on Manhattan's West Side. Other cities want to replicate the effects of the successful project, but not all cities have a piece of derelict elevated infrastructure in an ideal location – so far only Sydney has made the jump to reality. So another route for cities to go is bridges, which are elevated infrastructure after all, yet with the added bonus of views unencumbered by buildings on the sides. 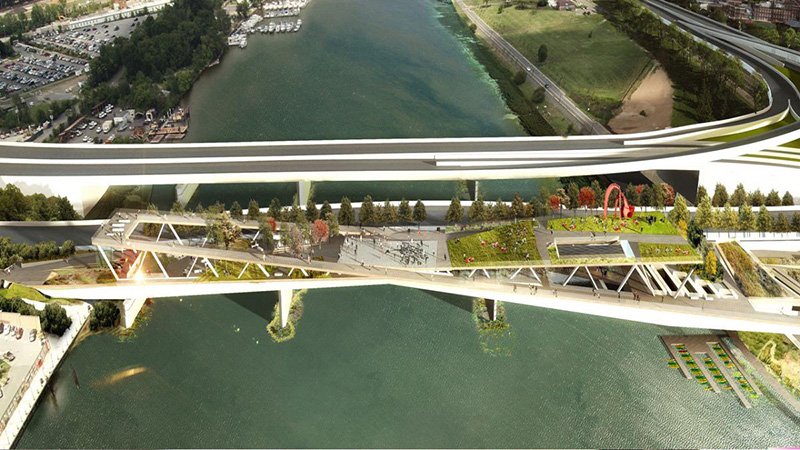 In 2014 OMA and OLIN won a competition for an elevated park over the Anacostia River in Washington, DC. In it competitors were asked to "transform an aged-out freeway bridge into a one of a kind new civic space over the Anacostia River." The winning design by the team of architects and landscape architects includes an amphitheater, gardens, a plaza, a sculpture park, look outs, boat launches, a waterfall, and an environmental education center. According to the 11th Street Bridge Park's website, the park is expected to open in 2019.

Jumping ahead to 2016, at the beginning of the year West 8 unveiled their design for the master plan of Houston Botanic Garden, which they've been working on since 2014. Their plan includes two bridges, one of them with an arched row of trees in planters. Unlike the High Line and the proposed bridges highlighted here, this planted bridge is for visual effect more than anything: the trees are lifted to allow views, though as they do that the trees are also removed from the actual experience of crossing the water. 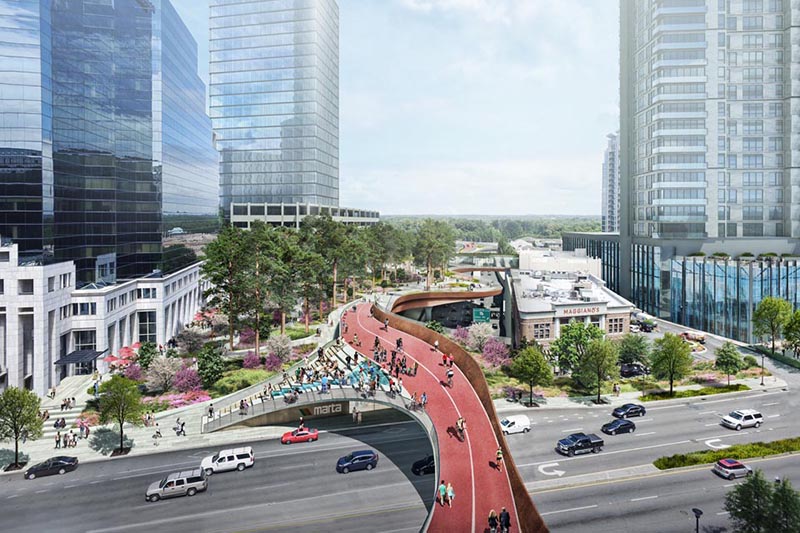 In April, New York architects Rogers Partners were selected, in collaboration with Nelson Byrd Woltz Landscape Architects, to design a nine-acre park over a section of the GA Highway 400 in Atlanta. 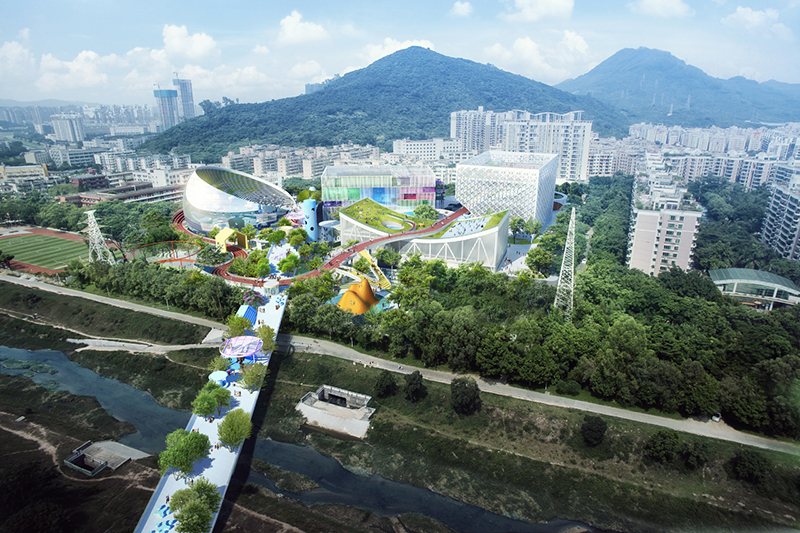 And in October, MVRDV and Zhubo Architecture Design won a competition for the Xili Sports and Cultural Centre in Shenzhen, China. The facilities are linked to a metro station by "a new diagonal (green) bridge."

The above projects are all, for now, ideas. What about built precedents of literal planted bridges? 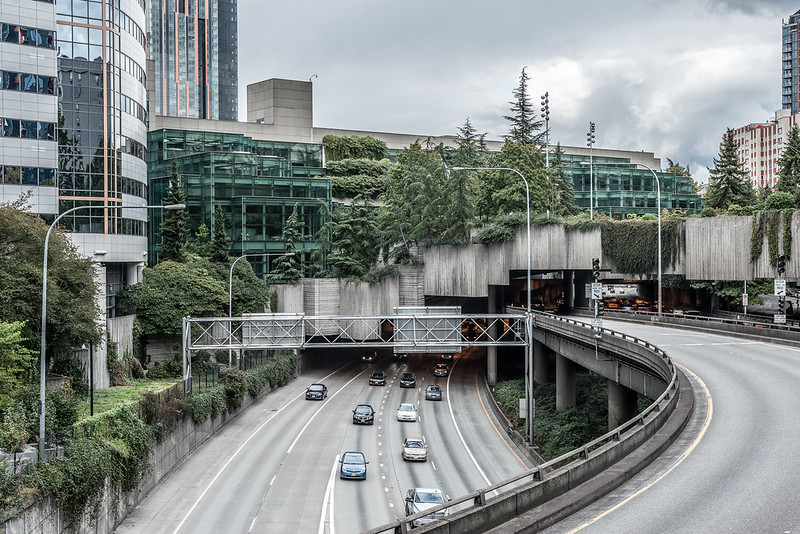 One of the earliest examples – if not the first, and easily the best – is Lawrence Halprin's Freeway Park in Seattle. After writing the book Freeways in 1966, the landscape architect was hired to design a park alongside a curving stretch of highway adjacent to downtown. He responded with a proposal to bridge the freeway instead, to link downtown to the neighborhoods on the east and undo the harm the eight lanes had inflicted on the area. The park opened in 1975, though all these decades later I'm amazed Seattle actually went for the idea.

On a much smaller scale is a garden bridge that Hans Luz designed for the 1977 National Garden Show in Stuttgart, Germany. The bridge remains to this day and serves as a helpful connection for people moving about the city's Schlossgarten. 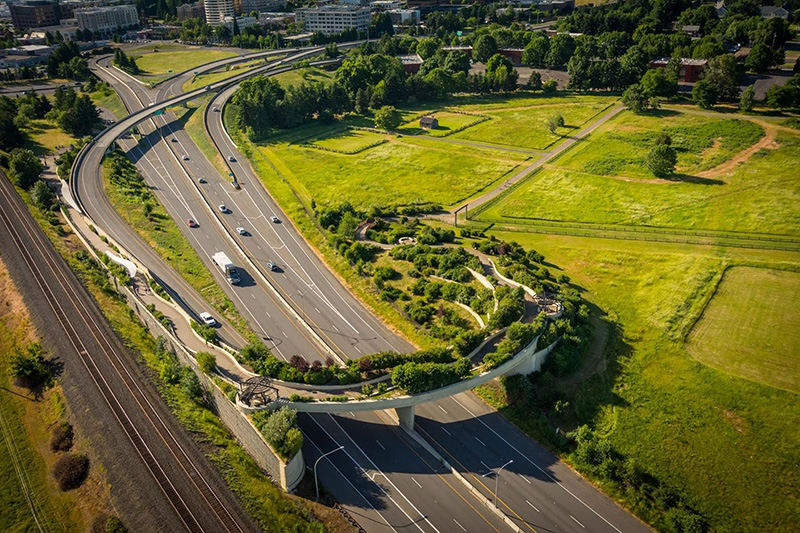 This century, Jones and Jones realized the Vancouver Land Bridge, a curving path that "reconnects historic Fort Vancouver to the city’s Columbia River waterfront and helps restore the natural landscape continuum from upland prairie to river edge." It's a beautiful design that says to me that planted bridges do not need to be overly ambitious or extremely long spans to have an impact. 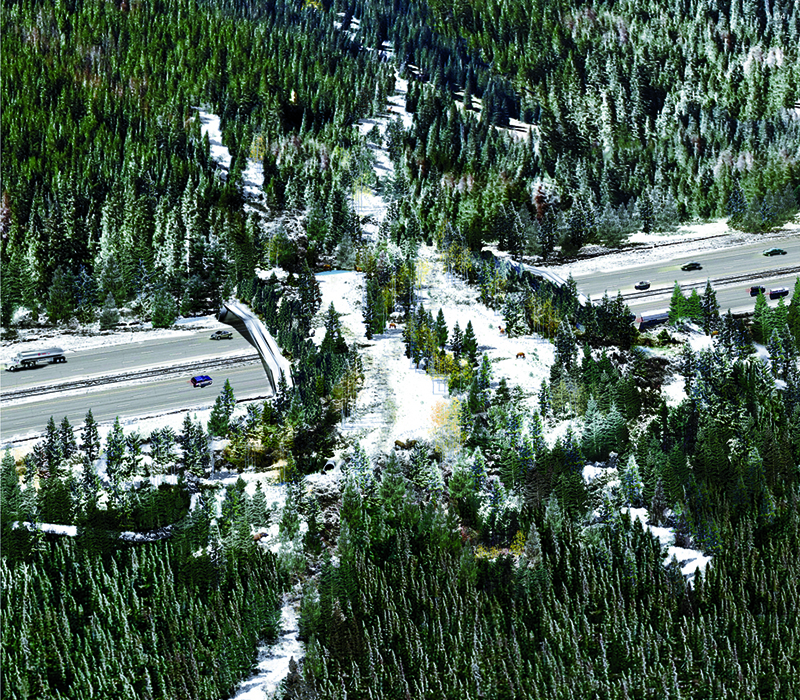 Which brings us to the last example: wildlife crossings. Many versions of these planted bridges have been built, but not enough to make a competition for one unnecessary. In 2010 ARC Solutions held the world’s first International Design Competition for Wildlife Crossing Infrastructure for a site in Colorado. Five teams were shortlisted and the team of HNTB and MVVA were named the winner. Since then ARC Solutions continues to fight for its cause, though there are no signs that the winning design will be realized. Nevertheless, the lesson that planted bridges can be for animals rather than people is an important one in the context of this apparently popular trend.
Email Post
Labels: architectural element