"Old + New" is a new series that pairs two books: one old and one new. Most of the reviews on this blog are fairly recent titles sent to me by publishers, but I wanted to expand the reviews to include older books from my library. To do so I'm using this series to review new books and, when appropriate, dig out an old book and include it as part of the review. This series does not replace my typical book reviews or book briefs or my Unpacking My Library blog; it merely expands how I present books on this blog.

Detroit Is No Dry Bones: The Eternal City of the Industrial Age by Camilo José Vergara
University of Michigan Press, 2016
Flexicover, 304 pages 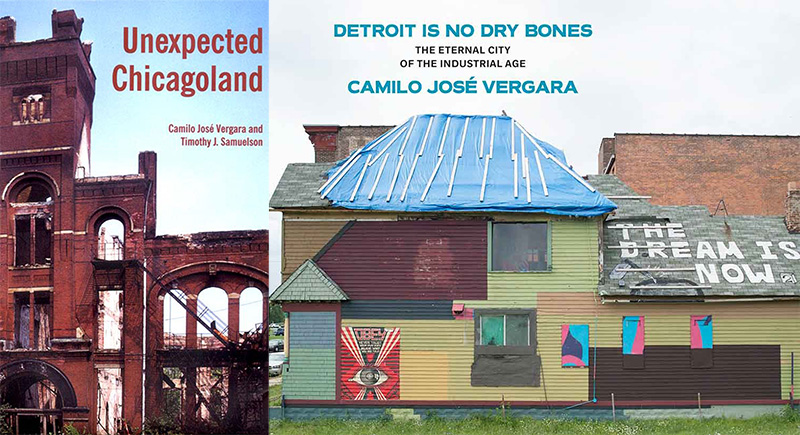 Camilo José Vergara is an American treasure. Educated in sociology and skilled in photography, he has spent the last four decades fusing these two fields to document parts of cities that have been, for lack of a better word, forgotten. Vergara has shot in and around Chicago, Detroit, New York and other U.S. cities, often returning to the same spots to capture their changes. Without him doing so, we'd be worse off, unable to grasp so easily how policies, economics, neglect, and other aspects of American life influence every little slice of land.

Take, for instance, the corner of Fifth Avenue and Monroe Street in Chicago, part of a late-19th-century housing development east of Garfield Park by developer Samuel Eberly Gross with architect L. Gustav Hallberg. Vergara photographed the intersection, framed by conical corners capped by turrets, back in 1981. About twenty years later he returned to the site to find the turrets gone but the rest firmly intact, if personalized over time. This example, as documented in the book Unexpected Chicagoland, which he made with historian and collaborator Tim Samuelson, isn't particularly dramatic, but it reveals the power found in Vergara's inability to abandon the places he documents; it seems as if he must return to the places his photos in order to trace their evolution.

(Rather than using Vergara's own photos, I've opted here to embed Google Street Views, in reference to the their role in his work. He writes on his website: "After the appearance of Google Maps (2005) and Google Street View (2007), these became important research tools, allowing me to revisit the locations of my photographs and to go beyond the frames of the images to explore the streets around them.")


[Fifth Avenue and Monroe Street, Chicago. Sometime between 1981 and 2000 the turrets were removed from the corner houses.]

Since Unexpected Chicagoland was published in 2001, Vergara has put out at a few more books, most recently Detroit Is No Dry Bones. With his appreciation of forgotten American cities, ruins, and urban change, Detroit is a natural canvas for the photographer, but the title is a perplexing one, at least to me. The answer is found on page 175 as well as in the book's introduction. A bit of graffiti – polished and precise – adorns a brick wall of the Ruth Chapel AME Church. It was done by Pink Pony Express, a Dutch design collective that adapted a scripture from the Book of Ezekiel by changing references of God to Detroit. Although intended to convey optimism about Detroit's resurgence, it adds some art, poetry and a healthy dose of confusion to the mix; this is fitting, since what's happening in Detroit this century is far from simple.


["Detroit Is No Dry Bones" on side of Ruth Chapel AME Church, East Kirby Street and Baldwin Street, Detroit]

Earlier in the book, which is organized into five chapters (Game Changers; Urban Fabric; Spirits of Motor City; Persistent Blight, Concentrated; and Conclusion), Vergara presents another sign of optimism, but one more literal: the word "OPTIMISMMMMMMMMM" written on the side of the People Mover in downtown. Instead of pink type, as on the side of the church, the type is white against a pink background – accompanied by a Pepsi logo. This corporate optimism is harder for me to digest, particularly since it was photographed from the Michigan Building, which adjoins the once-beautiful theater that recently served, famously, as a parking garage.

So far this review might give the indication that Vergara's books are predominantly then-and-now documents of cities. That is not the case, though at times he does present places in that manner. Most of Detroit Is No Dry Bones is made up of standalone photographs, carefully described, located and dated. Furthermore, each chapter and its subchapters include text by Vergara that is as enjoyable to read as his photos are took look at. They put the photos in a larger context and also give background on individual photos, such as Cranbrook Academy's experimental dwelling at 2126 Prince Street. Best intentions on the part of the prestigious school's students led to erection of the house, but it quickly became a contemporary ruin and in 2015 was a canvas for Beau Stanton's graffiti art.


[Experimental House at 2126 Prince Street in 2011, before it became a canvas for graffiti]

I could probably go on and on picking out instances from Vergara's book that strike my fancy. Suffice it to say that the book is a great trip to go on, at least from the comfort of my New York City apartment. If I lived in the midst of Detroit's "no dry bones" – resurgent or not – or had a stronger attachment to the place (I've been through the city without actually stopping, most recently more than a decade and a half ago) the pleasure I have looking at and reading this book would be different. (My attachment to Chicago, having had lived there and its suburbs for most of my life, makes Unexpected Chicagoland more of a melancholy trip for me.)

But this is not giddy pleasure; it's pleasure in taking in something that was done so carefully and lovingly, and in being provoked to consider the circumstances behind the photos at the same time. Clearly Vergara loves Detroit, but he also loves the changes – for better or worse – that are visible on its streets, buildings and landscapes. He actually proposed, in 1997, that parts of Detroit's boarded-up buildings downtown be kept as urban park, an "American Acropolis." Residents didn't care for that sentiment, and they might not be fans of Detroit Is No Dry Bones either, since it is hardly a booster's view of the city. But beneath the whole I grasp a light, a signal of something new on the horizon, born from equal parts frustration and creativity.