I've been infatuated with POPS (privately owned public spaces) since at least early 2008, when I read and reviewed Kristine F. Miller's Designs on the Public. One chapter in her book is all about three adjacent, contemporaneous POPS from around 1983: the AT&T Building (Sony Tower), the IBM Building (590 Madison Avenue), and Trump Tower, the last of which has four such spaces (a covered pedestrian space, a passageway to 590 Madison, and two landscaped terraces. Other POPS posts on this blog looked at 100 William Street and 33 Maiden Lane in Lower Manhattan and The Galleria on 57th Street.

A POPS is, per the great APOPS website, "a plaza, arcade, or other outdoor or indoor space provided for public use by a private office or residential building owner in return for a zoning concession." Or as the office of NYC Comptroller Scott M. Stringer puts it in their audit that was released a couple days ago, "Currently property owners are benefiting financially from approximately 23 million square feet of additional (bonus) floor area in their buildings in exchange for providing POPS at 333 locations in New York City." But is the public benefiting? Not really, according to the audit, which states that "more than half (182 of the 333) failed to provide required public amenities."

One of these failures is an all-out removal of a POPS, at 410 East 58th Street. The hotel/residential project from 1974 included a narrow finger of space connecting the tower to 57th Street, but even in 2000, when Jerold Kayden published Privately Owned Public Space: The New York City Experience, the required POPS was "occupied by a single-story, permanent, private entrance structure called a greenhouse." This space – or is it a non-space now? – is near the start of my upcoming "57th Street, River to River" architectural walking tour, and I'll admit that my research has revealed that so much about the tall buildings built along what has become known as Billionaire's Row concerns POPS and, more recently, air rights swaps or purchases.

Even though the audit reveals POPS are far from perfect, at least they provide something for the public, unlike the purchasing of air rights, which is done in private and leads to supertall towers built as-of-right, without the need to give the public any usable space. The city is powerless to do anything about these recent transactions, but at least it's finally doing something about POPS. Though it remains to be seen if developers and building owners will undo the neglect of the privately owned public spaces that enabled them to build higher and make more money.

Click the cover to read the "Audit Report on the City’s Oversight over Privately Owned Public Spaces" (PDF): 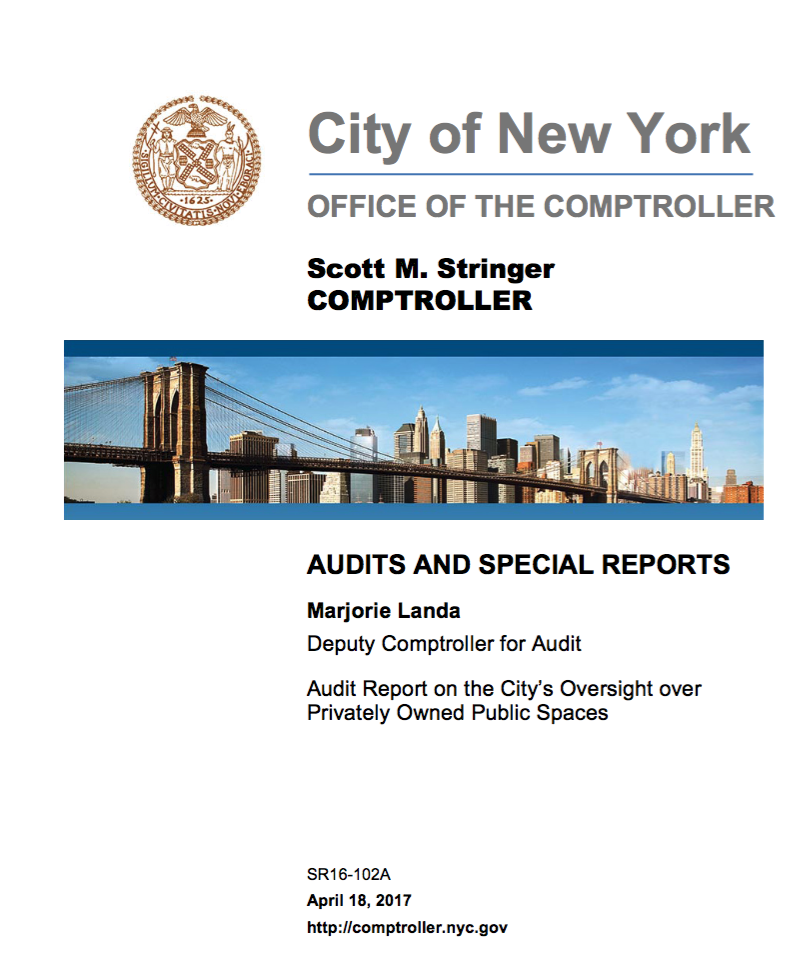