Earlier today I decided to check out the new Amazon Books, which opened a few days ago. The bricks-and-mortar version of the online powerhouse is located in Time Warner Center at Columbus Circle. The store makes its presence known only subtly, with signage in the two windows above the BOSS logos on the right: 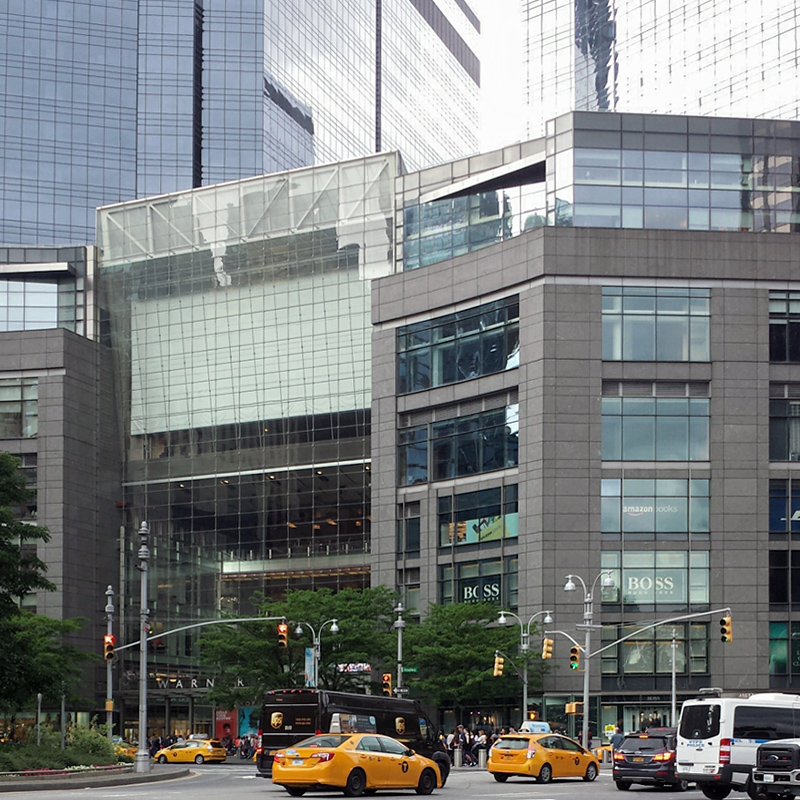 The store is located on the third floor of the building's mall, here seen from the outlook on the second floor: 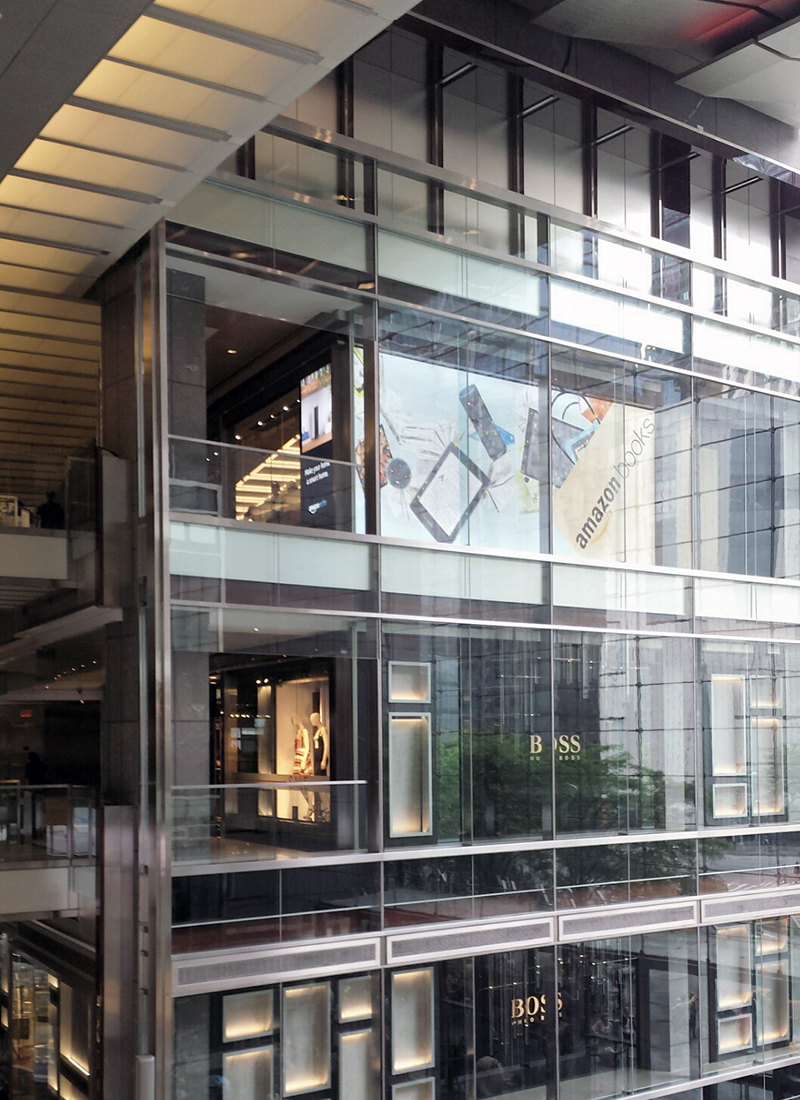 Given the layout of the mall, the store is accessed via a bridge, which features some signage to entice shoppers below to take the escalator up a couple floors: 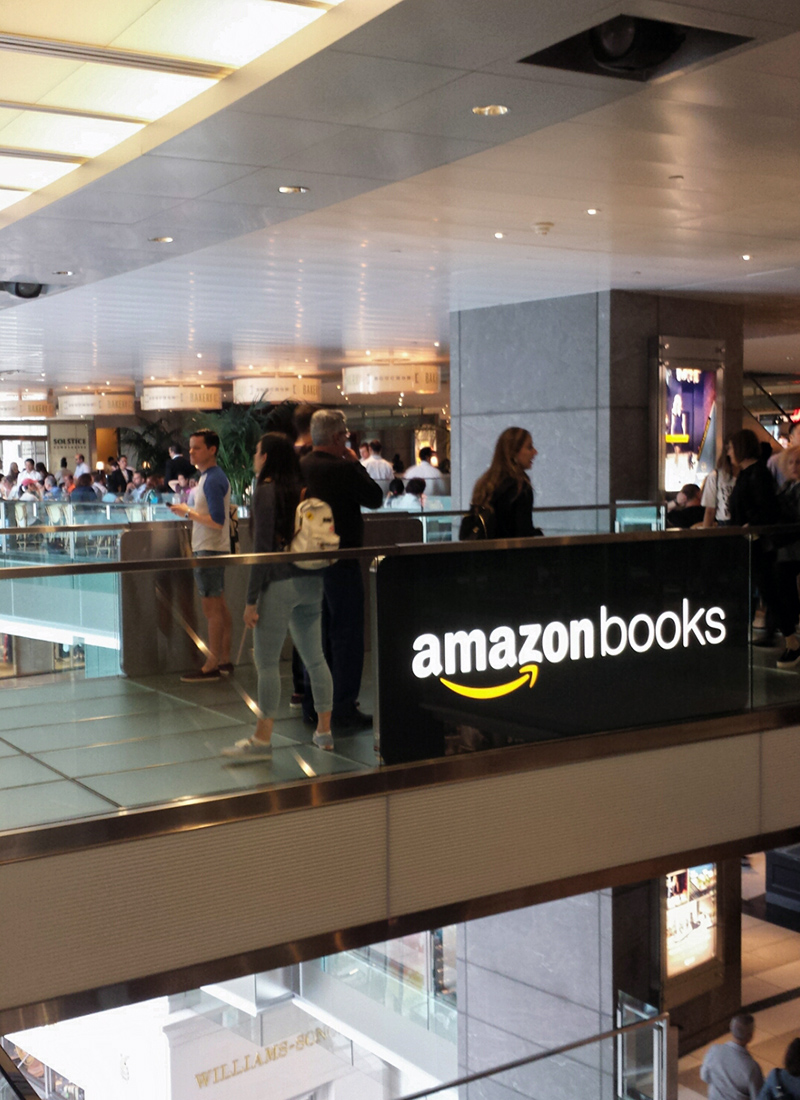 On this Saturday of Memorial Day weekend, there was a line to get into the store. For whatever reason (safety, not going over their occupancy limit, making it feel like an event, who knows?), the store let only ten people in at a time. My wait was about ten or fifteen minutes – more time that I would spend in the store. 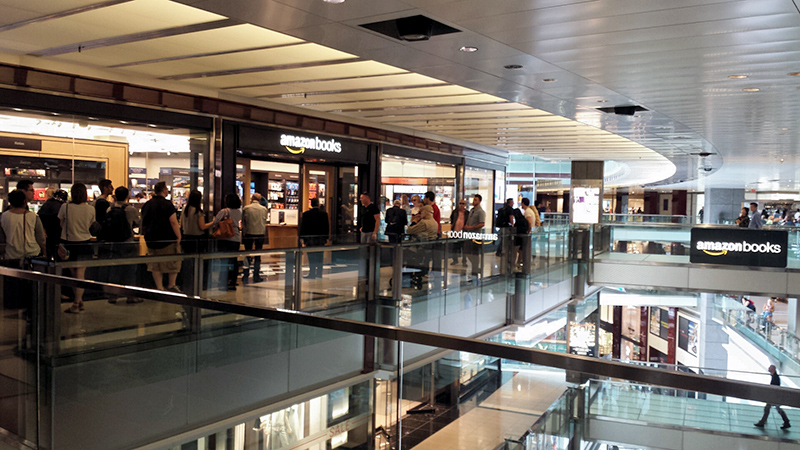 As has been written about all over the place, one gimmick of the seven-and-counting Amazon Books stores is that ALL of the books have their covers facing outwards, meaning there are lots of shelves but very few books: 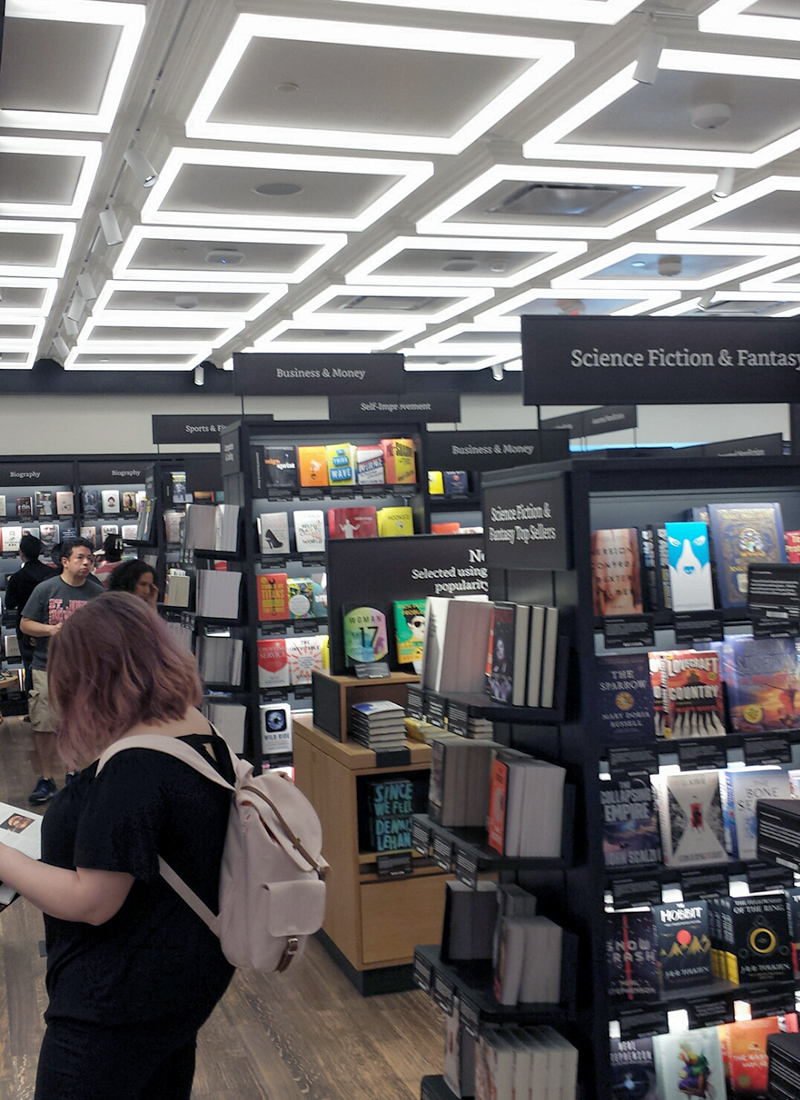 Another gimmick is that the selection is based, in part, on online sales on Amazon.com rather than, say, the expertise of the people working in the store, as is the norm in bookstores. Further, "reviews" come from online as well rather than employees. Note the "Books with More Than 10,000 Reviews on Amazon.com" and "Hot in Amazon Books" sections: 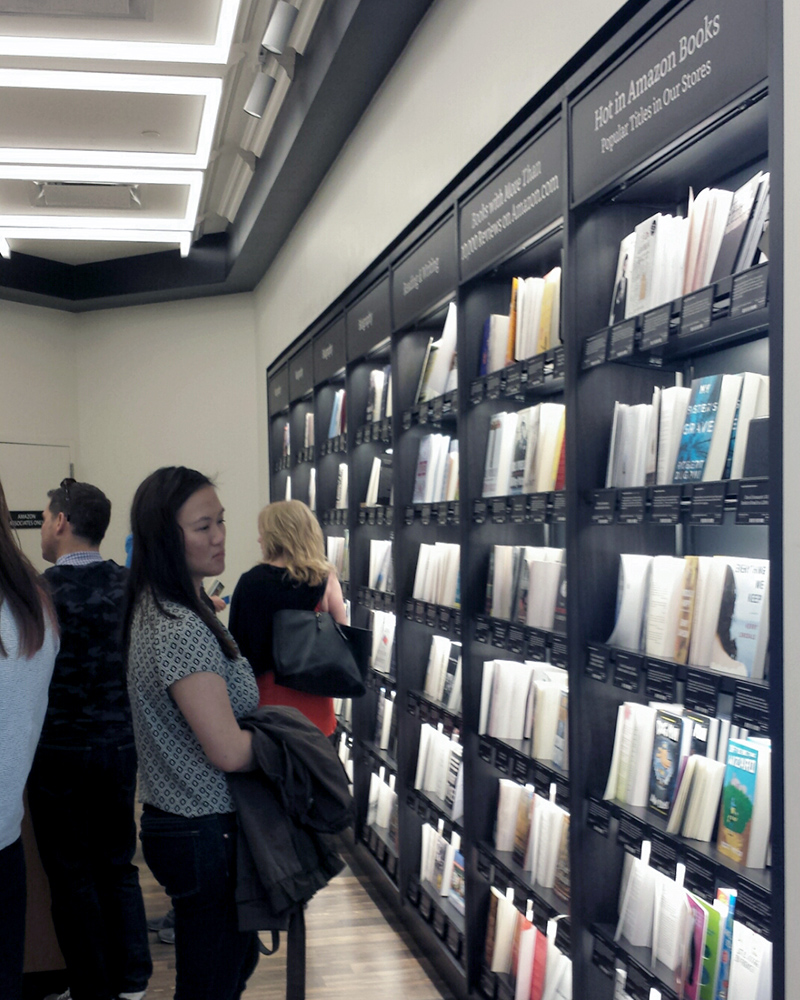 Of course I tried to find an "Architecture" section, but instead I discovered an "Arts & Crafts" section with an "Art & Design" subsection. By my count, they carry four architecture books: 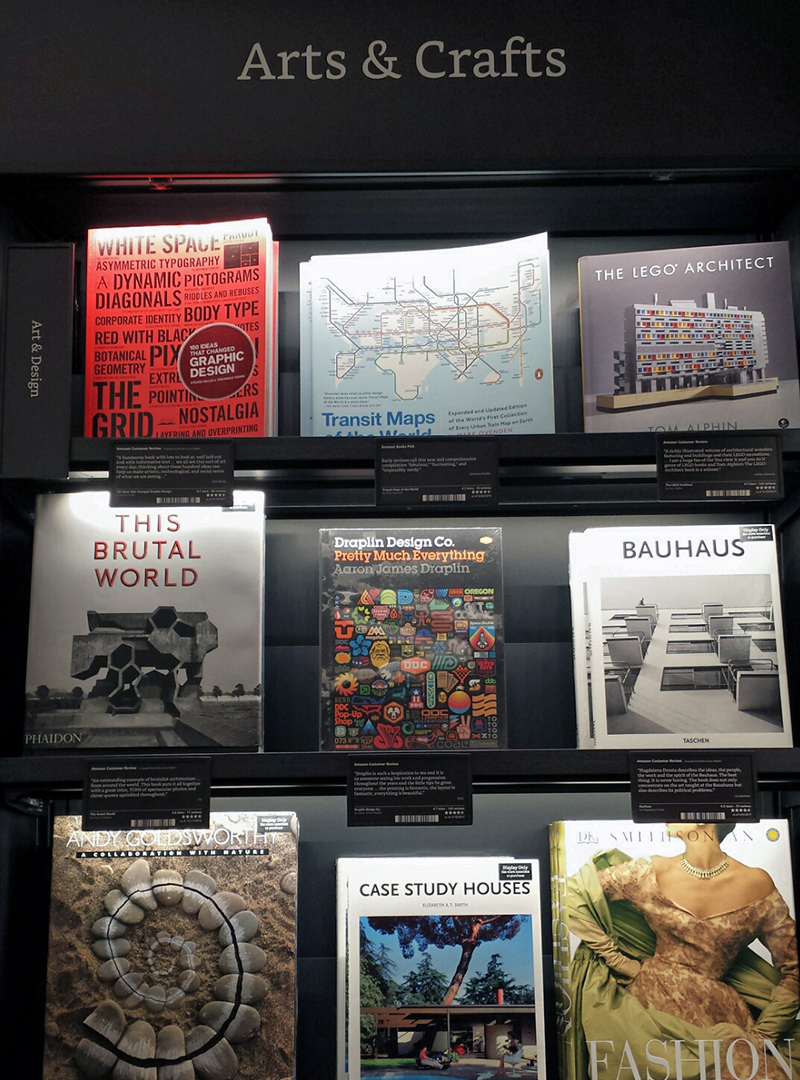 Another gimmick involves pricing and payment, which takes place via the Amazon smartphone app or at scanners positioned throughout the store: 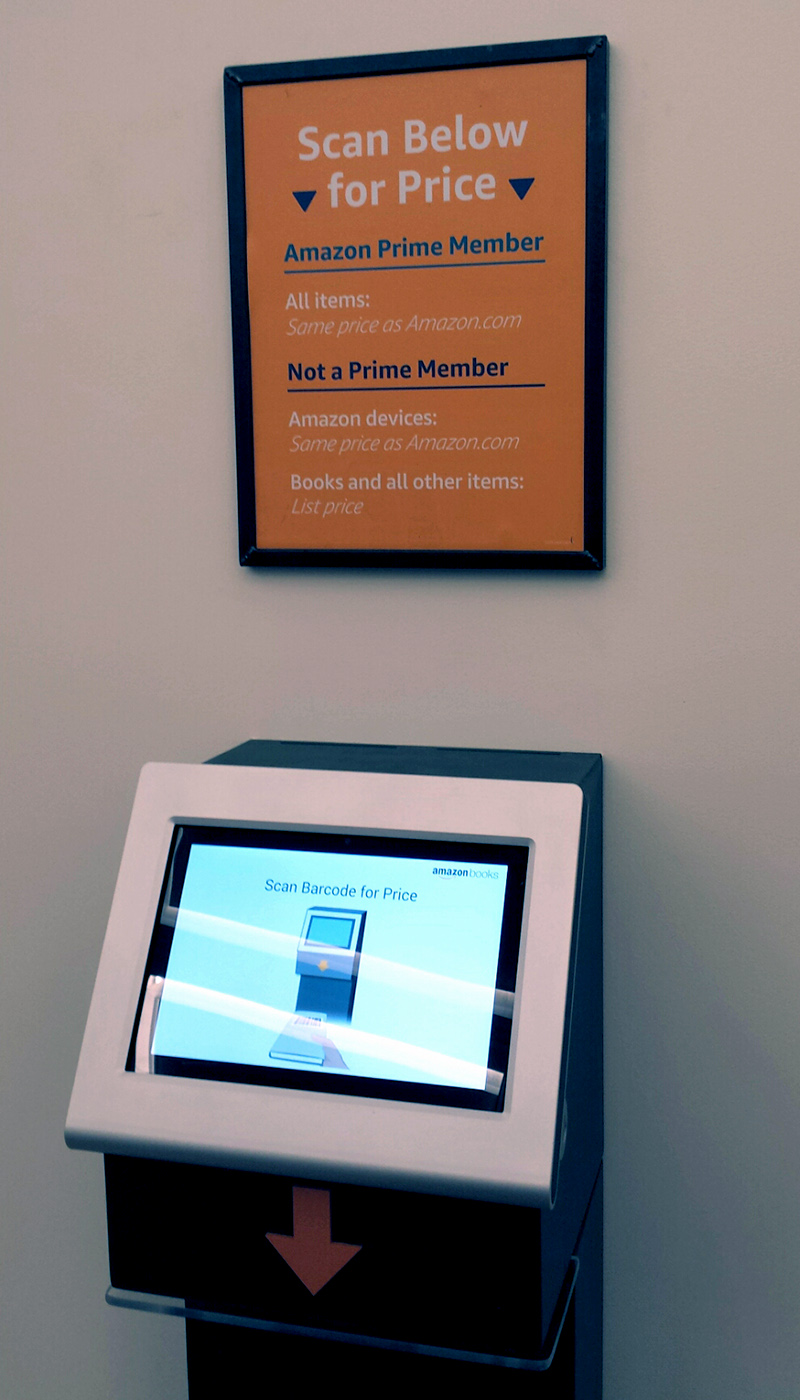 Herein lies one major impetus for the stores: increasing Prime membership, one of the few areas where Amazon actually makes money. Prime members get the cheap online prices in the store, but non-members who want to walk out with an actual book have to pay list price.

Another thing should be mentioned in regards to this Amazon Books: location. Although a second NYC location will be opening soon, at 34th Street and Fifth Avenue, it's clear that this first location is filling something of a bookstore void. There used to be a Barnes & Noble across from nearby Lincoln Center as well as a Borders inside Columbus Circle (a much bigger store than Amazon Books); and if we go back further, the great Coliseum Books was next to Columbus Circle long before the Time Warner Center. Now the nearest bookstores are Posman Books at Rockefeller Center and Kinokuniya across from Bryant Park, both to the south, and Book Culture and Barnes & Noble up in the 80s to the north. So Amazon Books is filling a gap, but it's doing so with a gimmick-filled attempt at gaining Prime memberships and Kindle readers, rather than providing people a deep selection with unexpected finds. Those wanting the latter should check out my list of NYC bookstores instead.
Email Post