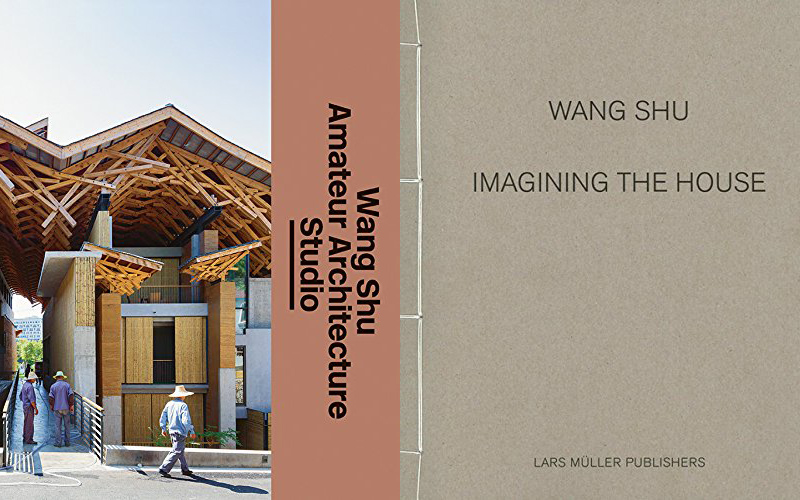 Like their buildings, books on Wang Shu and Amateur Architecture Studio are a rarity. I own three books on the 2012 Pritzker Prize-winning architect, who runs the studio with his wife, Lu Wenyu; as far as I know there aren't any more. Two of the three books are published by Switzerland's Lars Müller Publishers; one collects sketches on six projects and the second presents nine projects through photographs and coincides with an exhibition of the same at the Louisiana Museum of Art.

With its scarcity of color and photographs, Imagining the House is an architecture book for architects; this may seem meaningless (aren't all architecture books for architects?) but it's clearly a book that architects will have a better chance appreciating and understanding than laypeople. A quick flip through the book reveals very little, though, since most of the 168 pages are gatefolds. This forces readers to be patient with the drawings, which are reproduced at the same size as the originals, and to take their time in learning about the projects through Wang Shu's hand and words. Each project is prefaced by a piece of heavyweight paper with a description on one side and captions to the numbered sketches on the other side. Therefore one understands the sketches by flipping back and forth between them and the captions; the gatefolds help to make this far from frustrating, except when the drawings are turned ninety degrees to the text. Published the same year as Wang Shu's Pritzker Prize, the carefully crafted book (down to the cover and binding) acts as a view into the architect's intentions: his views on tradition and modernity, his sensitivity to experience, and the consistency of his sketches across projects.

This last element – Wang Shu's consistency – also comes to the fore in Wang Shu Amateur Architecture Studio, the companion to The Architect's Studio, the exhibition held at the Louisiana Museum of Modern Art earlier this year. Consistency is evident in a few places: the architect's forms, which undulate like mountain peaks; the materials he uses, many of them reused from buildings demolished as part of China's rampant modernization; and the large photographs by Iwan Baan that make up the majority of the book. For the most part the nine projects reiterate those in the book five years previous (Ningbo History Museum and China Academy of Art are the most notable examples), with the important addition of the Fuyang Cultural Complex and the Wencun Village. These two projects, though many miles apart from each other, are two parts of one commission: coming after Wang Shu's Pritzker, he was able to convince the client of the cultural center to build new houses and restore a village in Hangzhou's Fuyang District. Between the projects are a handful of essays by Kenneth Frampton, Yiping Dong, Aric Chen, and Ole Bouman, with two indispensable contributions by Wang Shu: a manifesto of Amateur Architecture and a diary of the China Academy of Art.

Another thing besides consistency that comes to the fore when reading these two books is the role of the Pritzker Architecture Prize in the work of Amateur Architecture Studio. For many architects, the prize served as a launching pad toward expanded practices, most notably in Zaha Hadid, who went from only a few buildings to her name when she won in 2004 to reportedly hundreds at the time of her death one year ago. But Wang Shu has turned down much of the work that came his way since 2012, in order to keep his firm small, do the projects he really wants to do (as in the case of Wencun Village), and focus his attention on the projects at hand. Perhaps this is one reason the buildings of Amateur Architecture Studio have a recognizable appearance: they arise from forms and materials that are rooted in tradition, craft, and the architect who carries them from idea to completion.