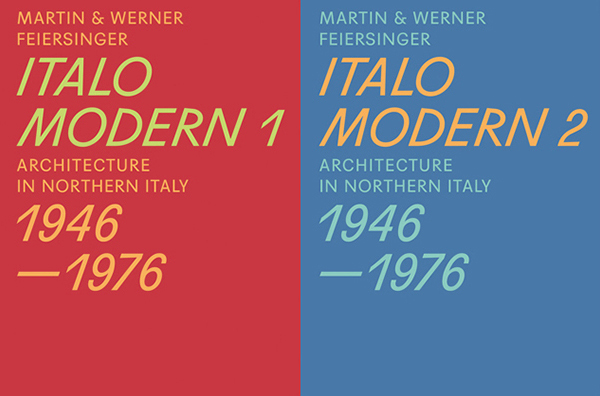 Brothers Martin and Werner Feiersinger shared a passion and followed through on it, producing two amazing books about thirty years of postwar architecture in Northern Italy. The two researched, selected, visited, photographed, drew, and wrote about hundreds of buildings, creating an unparalleled survey with many surprises. For the most part, Martin, an architect practicing in Vienna, was responsible for the selection, texts and plans, and Werner, a sculptor and photographer also in Vienna, took the photos. Their contributions are accompanied by an essay by fellow Austrian Otto Kapfinger and biographical material on the architects of the buildings; all of it is handsomely packaged by Park Books into two bound volumes with simple linen covers that recall the era of concern. 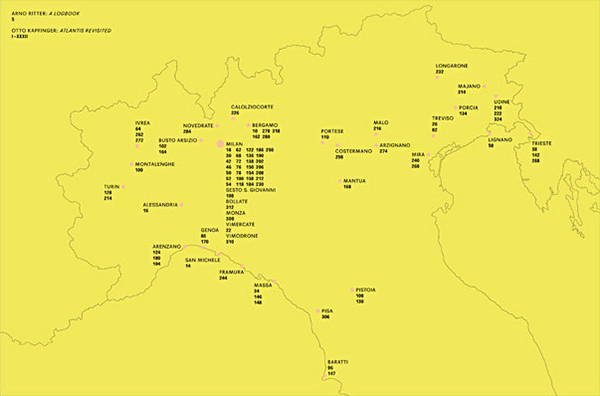 I'm guessing the whole enterprise could have been squeezed into one book fairly easily, though most likely with larger pages. This would have turned the two portable volumes into coffee table books rather than travel guides. That, and the parallel between two brothers and two volumes makes the final result fitting. Regardless, it's not clear as to why certain projects are in Volume 1 and others (more of them) are in Volume 2; perhaps it's explained somewhere in the text and I missed it, or it's simply that there were too many good buildings to fit into one book so a second one was added. Whatever the case, I can't imagine having just the first or the second volume, such is their appeal. 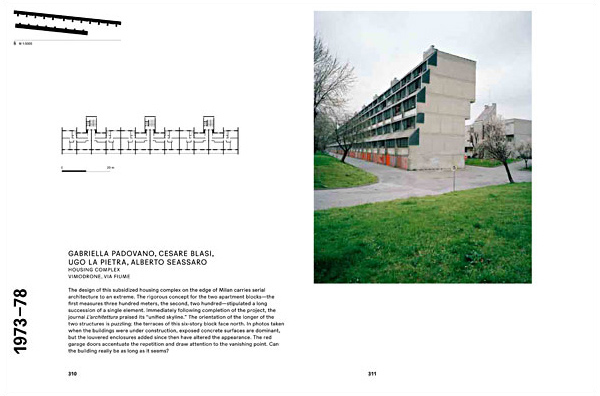 Volume 1 starts with a "logbook" by Arno Ritter, who is credited as developing the concept with the Feiersinger brothers and Willi Schmid. Following that is a chronological presentation of the buildings mapped on the yellow spread above. Interspersed among the projects is the essay by Otto Kapfinger, an architect and author who singles out some of the projects for the exploration of thirteen "notes" that are paralleled by texts by Rossi, Tafuri, and others. The buildings he highlights from Volume 1 are exceptional, but the more I glance at the projects I wonder if that would be the case with just about any selection. Regardless, as in other books, real estate is one way to determine which buildings at least the authors find most interesting; some buildings receive only one spread, meaning the ones given multiple spreads must have really captivated the Feiersingers during their research and travels. 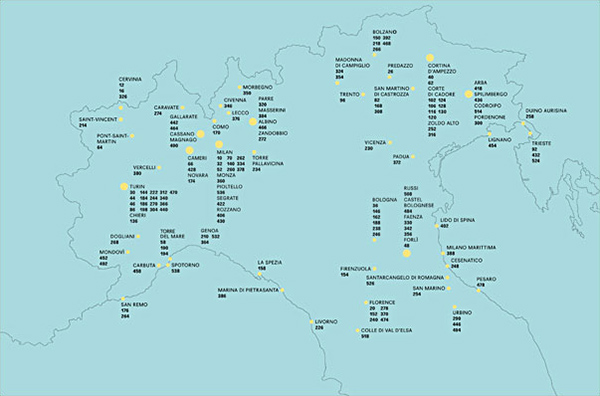 Volume 2 is a chronological presentation of even more projects (the blue map), but instead of an essay inserted between them intermittently, there are bios of the architects accompanied by bibliographies, selected works, and a list of their works in the books keyed to the page numbers. These bios and indexing are a strong argument for getting both books, in addition to, as already mentioned, the quality of architecture found throughout. What is most amazing for somebody like me, who thinks they know a little something about European architecture, is how many surprises are inside. The work of one architect is singled out in Kapfinger's essay as "a veritable 'discovery'" by the brothers: "Architect Luigi Caccia Dominioni? Never heard of him?" He's featured no less than fifteen times in the two volumes, alongside familiar names (Giancarlo De Carlo, Vittorio Gregotti, Giovanni Michelucci, Giò Ponti, and Aldo Rossi, to name just a few) and other "discoveries" that should entice people to drive around Northern Italy with these two books in hand. 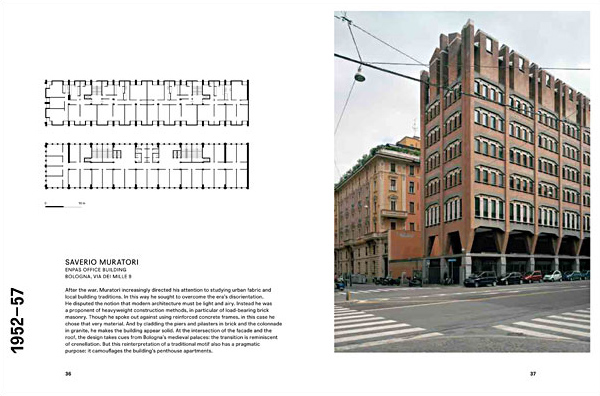