So You Want to Learn About: Frank Lloyd Wright

Today is the 150th anniversary of Frank Lloyd Wright's birth, and with that sesquicentennial are lots of celebrations. These include exhibitions, such as Unpacking the Archive at the Museum of Modern Art, and numerous new and reissued publications. The latter provoked me to put together this small list of books on Wright – small in that it's a tiny fraction of the hundreds of books devoted to the architect, but these are the ones I'm most familiar with. Those interested in learning (more) about the great architect should find something useful in the pages of these books. 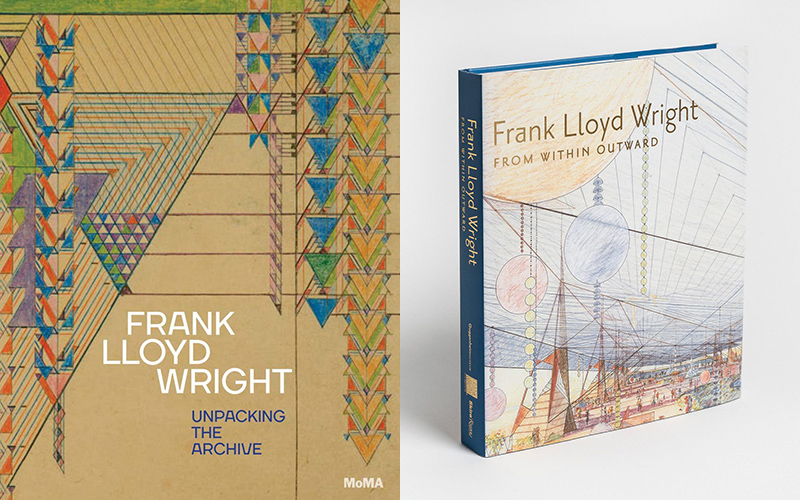 1: Frank Lloyd Wright: Unpacking the Archive edited by Barry Bergdoll, Jennifer Gray | Museum of Modern Art | 2017 | Amazon
Five years ago the Museum of Modern Art and Columbia University acquired the massive Frank Lloyd Wright archive – more than two million objects! This book is the catalog to the first exhibition to dig into the archive. Although the book, "a collection of scholarly explorations," only scratches the surface of the archive, it does so with great depth and promise for future "unpackings."

2: Frank Lloyd Wright: From Within Outward by Richard Cleary | Skira Rizzoli | 2009 | Amazon | Review
Six years before MoMA, the Guggenheim mounted an equally ambitious exhibition upon the 50th anniversary of its Wright-designed home – and by virtue of that year of 1959, the 50th anniversary of Wright's death. The catalog is packed with images on many Wright projects, but unfortunately it doesn't include shots of the beautiful models made for the exhibition; to see those check out my exhibition review.

3: Frank Lloyd Wright: An Autobiography by Frank Lloyd Wright | Barnes & Noble Books | 1998 | Amazon
It goes without saying that learning the most about an architect requires reading their own words. With Wright, that starts with his autobiography, first published in 1932 and then​ enlarged in 1943. At nearly 600 pages and made up of five "books" (Family, Fellowship, Work, Freedom, Form), the latter is a long read, and not one I've devoted enough time (or patience, given Wright's prose) to tackle. Nevertheless, Wright's autobiography is a must for anybody seriously interested in the man behind the buildings.

4: An Organic Architecture: The Architecture of Democracy by Frank Lloyd Wright | Lund Humphries | 2017 | Amazon | Review
A transcript of four talks Wright gave in London in 1939, this slim book (slim relative to his autobiography, at least) finds the architect taking a characteristically superior position to criticize retro and modern architecture, expound on his idea of "organic" architecture, and argue for urbanism to follow his Broadacre City, which he was working on at the time. Stemming from its origin, the text is more conversational than the books and essays he penned directly.

5: Frank Lloyd Wright: Essential Texts edited by Robert Twombly | W. W. Norton | 2009 | Amazon | Review
When I reviewed this collection of "essential" texts in 2009, I was critical of Wright's writing style, calling it "anachronistic" and "requiring a patience from the reader." Nevertheless I described the collection edited by Robert Twombly as "worth it, particularly for students and historians." Kudos to Twombly, who also wrote a biography of Wright, for wading through the architect's writings and supplying helpful introductions in this chronological presentation.

6: This Is Frank Lloyd Wright by Ian Volner | Laurence King Publishing | 2016 | Amazon | Brief
I was pleasantly surprised by this book, part of Laurence King's "This Is" series of artist biographies. Writer Ian Volner is paired with illustrator Michael Kirkham in a highly accessible narrative that hits about every highlight – and there were plenty – in Wright's long and dramatic life. The book is a great introduction to the architect's life, particularly for those not yet willing to dive into biographies by Robert Twombly, Brendan Gill, Ada Louise Huxtable, or Meryle Seacrest.

7: Many Masks: A Life of Frank Lloyd Wright by Brendan Gill | Da Capo Press | 1998 | Amazon | Review
Many biographies of Frank Lloyd Wright exist (those by Twombly, Huxtable and Seacrest are ones I know about but am not familiar with first-hand), but this famous bio by New Yorker writer Brendan Gill was the first I read. The title is an analogy that Gill discovered and used to describe Wright over the course of his 91 years. It's been a dozen years since I read and reviewed the book, but I still remember not buying into the analogy: "The book reads much like contemporary tabloid fare" and "does not give us the depth that Wright's life deserves."

8: The Fellowship: The Untold Story of Frank Lloyd Wright & The Taliesin Fellowship by Robert Friedland, Harold Zellman | Harper Perennial | 2007 | Amazon | Review
This biography narrows in on one aspect of Wright's life: the Fellowship he ran at Taliesin from 1932 onwards and at Taliesin West during the winters starting in 1937. Although the authors focus on the fellowship and Wright's relationship with his third wife, Olgivanna, the book tackles many other aspects of the architect's life, in many cases trying to undo myths that have been carried down over the years and humanize a larger-than-life figure.

9: The Architecture of Frank Lloyd Wright: A Complete Catalog by William Allin Storrer | University of Chicago Press | 2017 (Fourth Edition) | Amazon | Review
Books collecting the buildings of Wright are numerous and Storrer's compact catalog of 433 built works (in the third edition from 2002) is easily my favorite. He presents them chronologically – from Unity Chapel (1886) to the Lykes Residence (1966) – with descriptive text, photos, addresses, and maps for visiting the extant buildings. The fourth edition is being released to coincide with Wright's sesquicentennial and includes 37 new sites recently identified as the work of Wright.

10: Frank Lloyd Wright: The Masterworks edited by David Larkin, Bruce Brooks Pfeiffer | Rizzoli | 1993 | Amazon
This handsome coffee table book consists of nearly forty Wright buildings, most of them​ still standing at the time of publication. A few, such as the Larkin Building and Midway Gardens, no longer exist, but the remaining buildings were documented with brand new photos. The text by Wright scholar Bruce Brooks Pfeiffer is fairly lengthy (especially when compared to Storrer), so there is much to learn about the architect's many "masterworks" all in one place.

11: Wright Sites: A Guide to Frank Lloyd Wright Public Places edited by Joel Hoglund | Princeton Architectural Press | 2017 (Fourth Edition) | Amazon | Brief
Like Storrer's book above, this guide to publicly accessible Wright building is receiving its fourth edition timed to the architect's sesquicentennial. With 71 buildings, it falls somewhere between the Storrer and Pfeiffer books in terms of quantity, but it's the smallest and therefore most portable of the three – fitting for a guidebook. It makes me want to rent a car and hit the road this summer to tackle one of the guide's six suggested itineraries.

12: Fallingwater edited by Lynda Waggoner | Rizzoli | 2011 | Amazon | Review
When I reviewed this book by the Director of Fallingwater in 2011, I mentioned that around a couple dozen books and DVDs on the famous house existed. Such is the impact and appeal of the house in Western Pennsylvania. (Another gauge is being able to recall first learning about Fallingwater; I was in architecture class in high school, watching a documentary on the house.) Most of this coffee table book is made up of a tour by Waggoner accompanied by Christopher Little's lush photos, though input from the restoration's structural engineer is also rewarding.

13: Fallingwater by Robert McCarter | Phaidon | 2002 | Amazon | Review
Phaidon's large-format "Architecture in Detail" series presented the most important modern buildings, so Fallingwater's inclusion was a must. (The book was also collected with Aalto's Villa Mairea and the Eames House in one of the must-have "Architecture 3s," which my review links to.) McCarter's text draws heavily on Donald Hoffman's "definitive historical study of this house" (below), but the book benefits from a solid selection of photographs by Peter Cook as well as plans, elevations, and sections, though I wish some construction details were included as well.

14: Fallingwater: A Frank Lloyd Wright Country House by Edgar Kaufmann Jr. | Abbeville Press | 1986 | Amazon
If anybody were most qualified to write about Fallingwater, it would be Edgar Kaufmann Jr., son of the client, apprentice to Wright, part-time occupant of the house for 27 years, and heir who donated it to the Western Pennsylvania Conservancy. Logically then, this large-format book has Kaufmann's recollections, as well as photos by Christopher Little (apparently the photographer of choice for the building), some beautiful drawings in color, and much more. It is a fitting balance of Kaufmann the client's son and Kaufmann the architectural historian.

15: Frank Lloyd Wright's Fallingwater: The House and Its History by Donald Hoffman | Dover | 1978 | Amazon
Fifteen years after Edgar Kaufmann Jr. announced his intent to donate the house to a conservancy and therefore make it accessible to the public, Dover released what is considered the house's definitive account. If I had to choose only one book to keep on Fallingwater, it would be this one (or Kaufmann's, if images were a deciding factor). The details of Hoffman's deeply researched book have yet to be matched, though I have not read Franklin Toker's Fallingwater Rising from 2003, which is also considered definitive.

16: Usonia, New York: Building a Community with Frank Lloyd Wright by Roland Reisley with John Timpane | Princeton Architectural Press | 2001 | Amazon
I've been fortunate enough to have stayed in one of Wright's houses in Usonia, a development planned by Wright after WWII for a site in Pleasantville, New York. This book is authored by the utopian community's "de facto historian," Roland Reisley, who was also one of Wright's clients (Wright designed three of the 47 houses, with the rest by Kaneji Domoto, David Henken, Aaron Resnick, and other architects, most of them Wright apprentices). It's a thorough case study of an often overlooked project that was Wright's strongest chance of realizing something close to his Broadacre City ideal.

17: The Women: A Novel by T. C. Boyle | Penguin Books | 2009 | Amazon
Wright may have been one of the greatest architects ever, but he is also known for a life full of drama, the type that would get him on the front pages of newspapers even today. The women in his life were major parts of the drama, but with so much attention given the man himself it took a while for the stories of his wives and lovers to be the focus. T. C. Boyle, who lives in Wright's first California house (the 1909 Stewart Residence), wrote "a fictional re-creation of certain events in the lives" of his women. The stories of Miriam, Mamah, Olgivanna, and Kitty are well known to readers of any Wright bio, but Boyle tells their stories so beautifully it's hard not to get pulled along for the whole ride.

18: Frank's Home by Richard Nelson | Theatre Communications Group | 2011 | Amazon
This obscure inclusion – the script for a play about Wright – is something I found at a thrift store but would have passed up if not for having seen Richard Nelson's Frank's Home beforehand, back in 2006. In it, Wright was played by Peter Weller (yes, RoboCop) and much of the story, from what I recall, took place at a picnic and focuses on the architect's relationships with his wife, children, and Louis Sullivan. Though not as rewarding a fiction as Boyle's, Frank's Home reveals that Wright's life was worthy of a play, one of the few architects to boast as much.
Email Post
Labels: so you want to learn about