A Hidden Gem in a Westport Forest

Over the weekend, with the help of a friend's car, I decided to take my wife and daughter to Grace Farms, the SANAA building in New Canaan, Connecticut, that I was able to visit (and write about) when it opened in 2015. But on the way there we first stopped to see Victor Lundy's First Unitarian Church in Westport, which I learned about the day before when a quick Google search for "modern Connecticut architecture" brought me to the Westport Historical Society. The image of the church on that page – like a viking ship moored in a forest – was enough to convince me to visit. 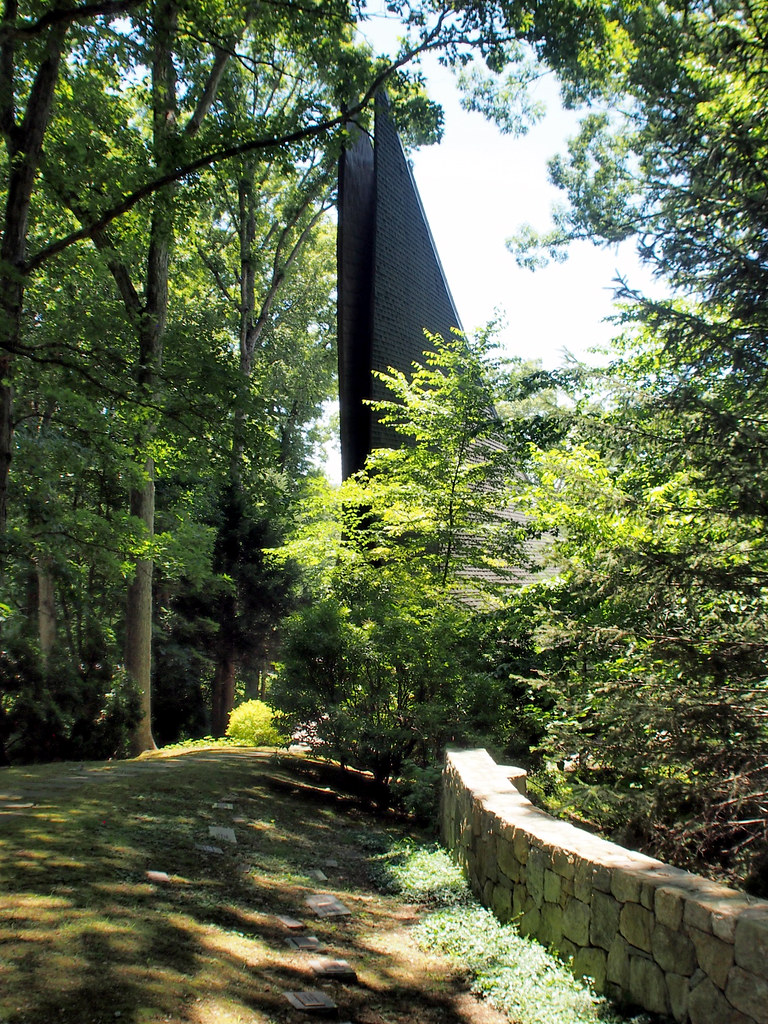 In reality the building does not disappoint. But before reaching the peak of the roof nestled amongst the trees, as in the photo above, we had to walk from the parking lot past two classroom wings that extend in a "V" formation from the sanctuary space. From here, the building felt much like a resort, with its low-slung roof, stone walls, subtly curved glulam beams, and deep overhangs protecting the glass walls. 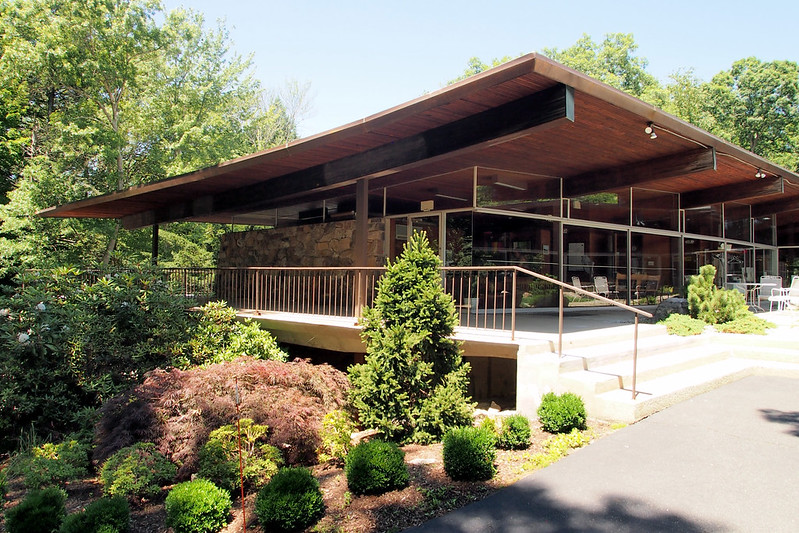 The triangular outdoor space – combined with the peak of the roof rising in the distance – made it pretty clear where we needed to go. 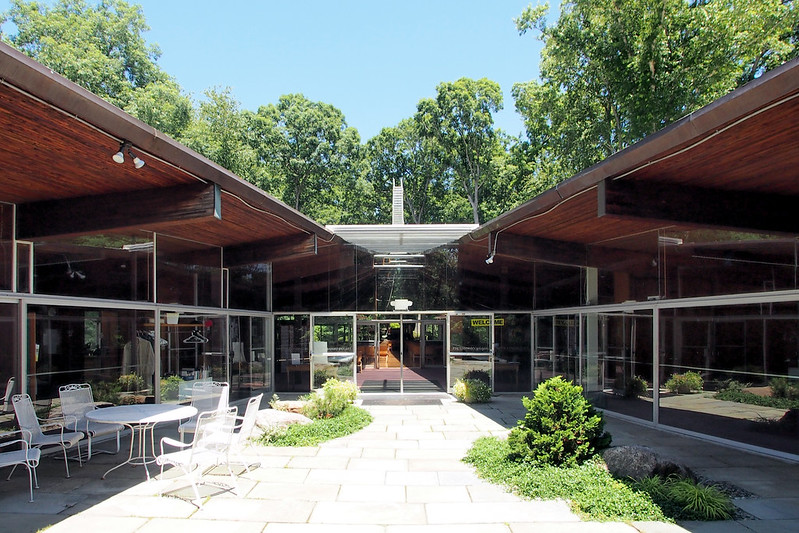 Once inside, the logic of the architecture is laid out clearly: the curved glulam beams progressively rising toward the peak; the glass walls framing the trees outside, and the gap between the two sides of the wooden roof bringing in light from above. This is, without a doubt, a sacred space, but one rooted in its place. 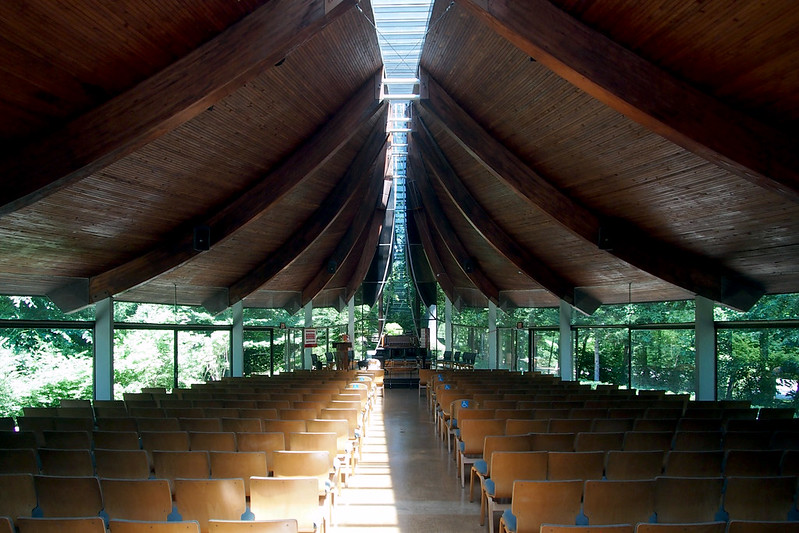 Looking away from the pulpit, back toward the entrance, the gradual rise of the beams is more pronounced, as is the (lower) illuminated gap between the roofs. 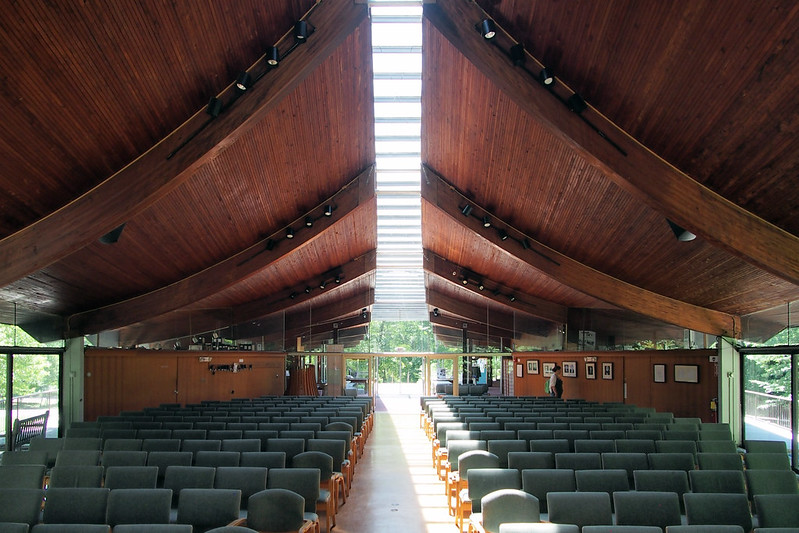 The roofs continue outside, beyond the vertical "zipper" of glass behind the pulpit. From here, looking up, the wooden underside changes to metal past the most upright of the glulam beams. 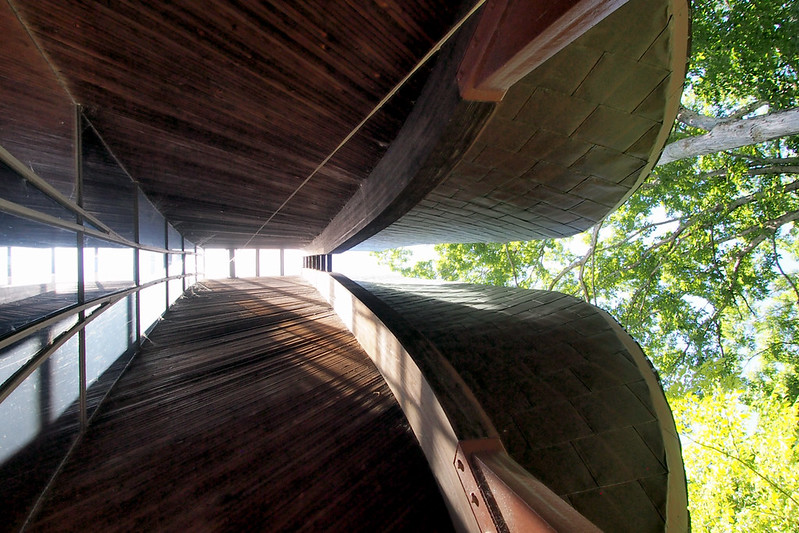 On top of the roof are shingles – simple yet entirely suitable given the roof's parabolic form. 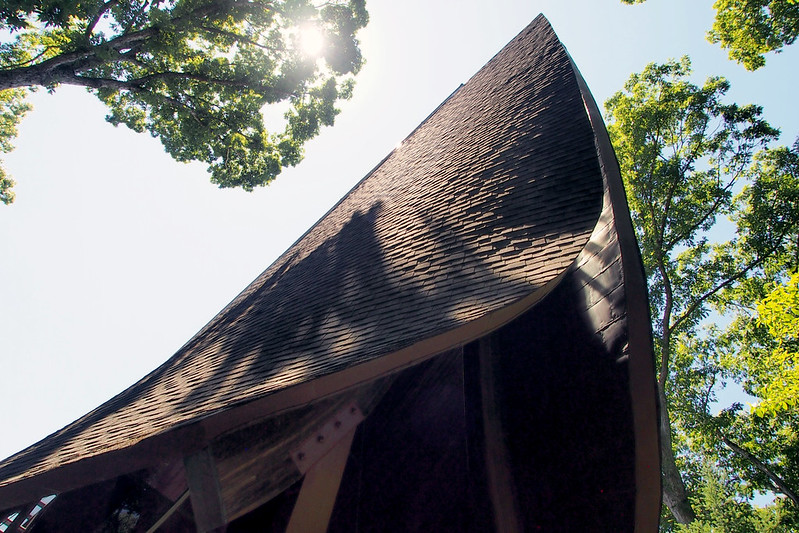 Stepping stones set into the moss-covered ground lead from the walkways around the sanctuary to small burial plots (for cremated remains, I presume) that are set among the trees. Occasionally there is a bench – such as one for victims of September 11 – that is oriented back to the church to frame a view of its impressive roof. 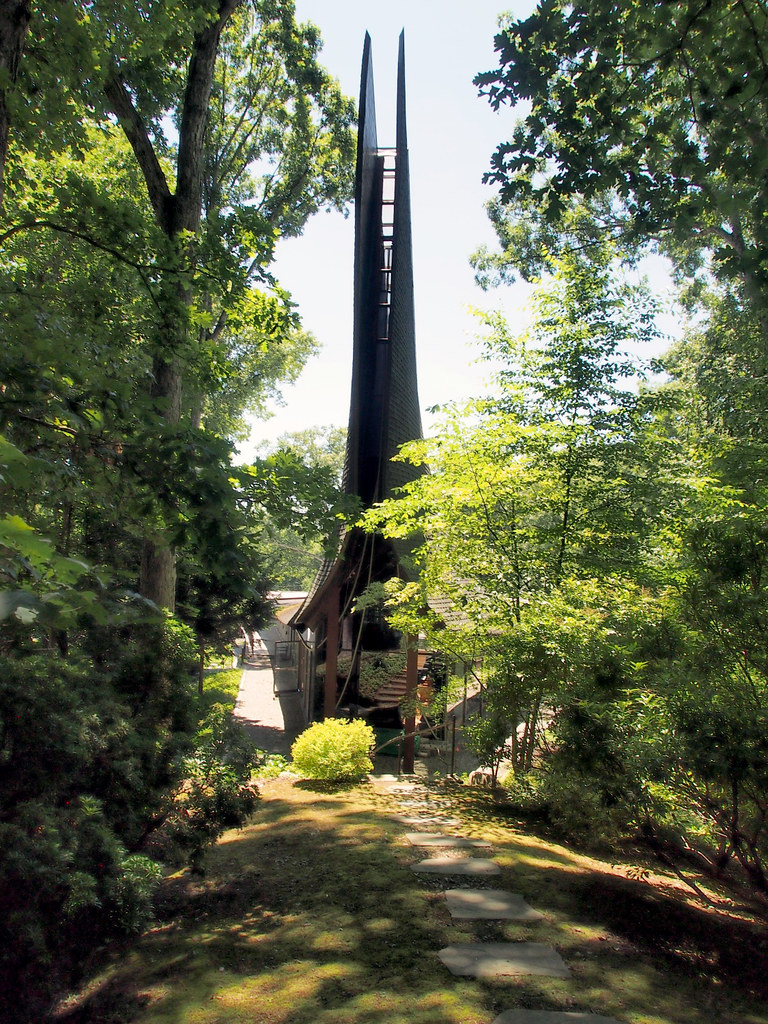 Heading back to the car we decided to walk along one of the walkways outside of the building, rather than back through the sanctuary. Glass doors that give views into the sanctuary, like the one below, must serve to greater connect the congregation to its beautiful surroundings during services. 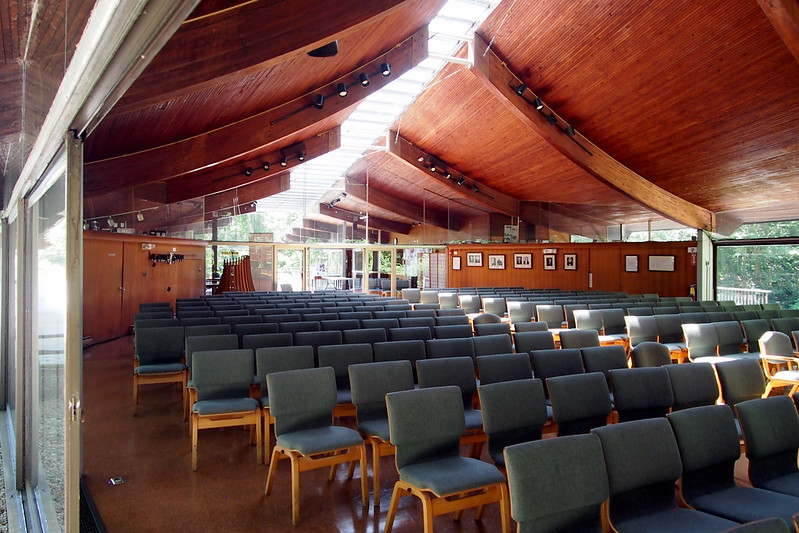 This last view is looking along that walkway toward the peak of the roof. 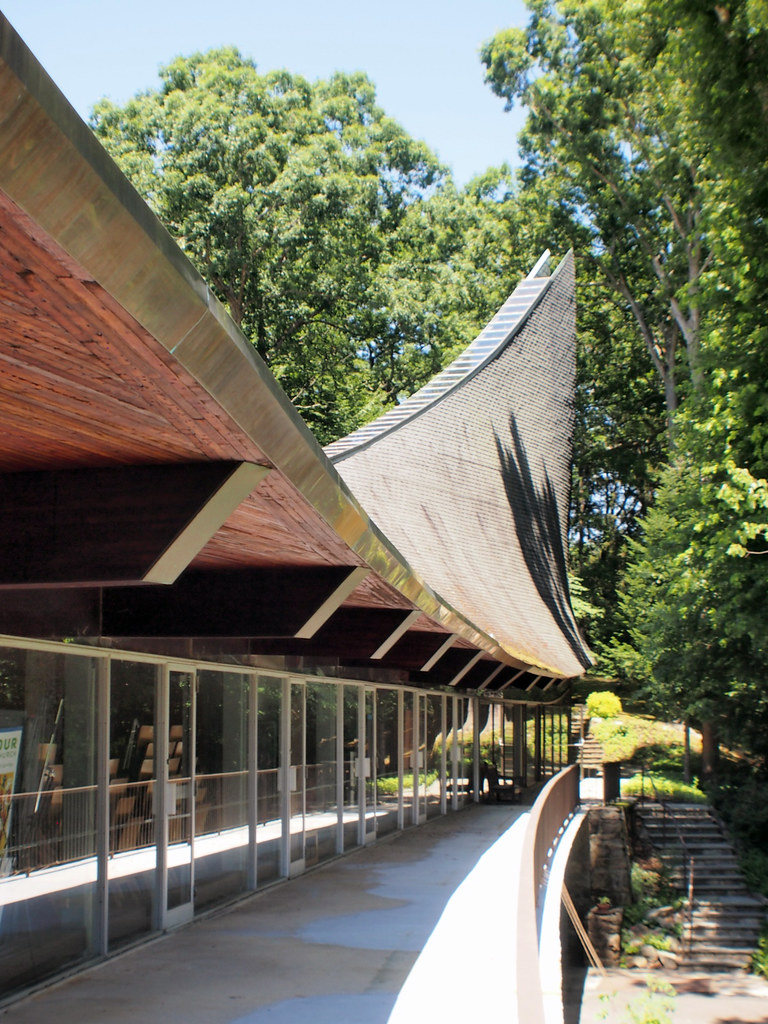 Lundy designed the church in 1959, won a P/A Award for it in 1960, and wrapped up construction on it in 1965. Perhaps because his output was so varied (witness this "inflatable" for the 1964 World's Fair), Lundy is not as well known as many of his contemporaries. As Mimi Zeiger put it in her 2008 Dwell story on Lundy, "Victor Victorious," "What makes [his] low profile surprising, is that Lundy, as much as his distinguished colleagues, experimented with and redefined modernism in the sixties and seventies." The First Unitarian Church is but one example of this, and one worth visiting as much as Grace Farms, Philip Johnson's Glass House, and other better known works of modern architecture in Southwestern Connecticut.
Email Post