Book Review: Welcome to Your World

Welcome to Your World: How the Built Environment Shapes Our Lives by Sarah Williams Goldhagen
Harper, 2017
Hardcover, 348 pages 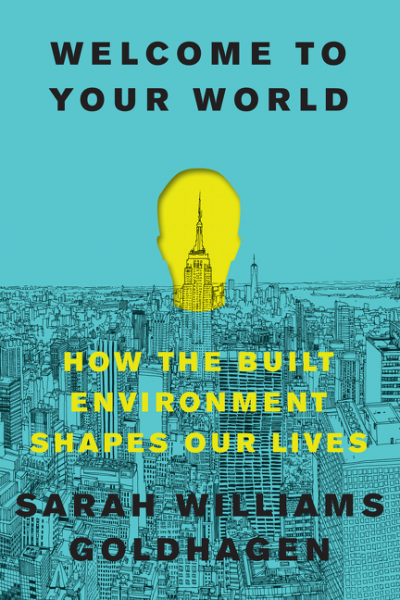 Welcome to Your World is critic and educator Sarah William Goldhagen's attempt to succinctly and clearly distill voluminous research on neuroscience and architecture toward the improvement of buildings and cities. It's a welcome book that makes an otherwise impenetrable topic accessible to a wider audience.

But before diving into this book review, a personal aside: Although I didn't know it so well at the time (the first half of the 1990s), the school I attended for undergraduate architecture was particularly strong in environment-behavior studies. Thing is, Deconstructivist architecture was all the rage at the time, and like anywhere, striving to create something new and personal in architecture studio trumped the learning taking place in other classes, be it history, structures, or MEP.

Kansas State University was, and still is, home to David Seamon, a prolific author on phenomenology, as well as Dick Hoag, whose Environment & Behavior classes were some of my favorites, and Robert Condia, who has delved recently into neuroscience. Although searches for novel forms in studio often took priority, the teachings of these three (and others) have stayed with me over the years, and these days they tend to enter my psyche more frequently. Perhaps this is due to the cyclical nature of architectural practice, which veers back and forth between social and formal considerations; or maybe it's the increasing relevance of (neuro)scientific studies related to architecture, which haven't been as well considered since the 1970s and the short-lived influence of environmental psychology (all of the E&B textbooks seemed to come from that period). Whatever the case, this aside stems from the numerous overlaps found between my undergraduate education and the ideas Goldhagen explores in her book.

One reason I bring up my architectural background is because Goldhagen argues that, among other things, the design professionals shaping our homes, places of work and play, and so on should "be thoroughly schooled in the evolving body of knowledge in environmental aesthetics and experiential design." Her argument is predicated, first and foremost, on breaking down the barriers between building and architecture (and with it the belief, I presume, that only people paying A LOT of money get the latter, the experientially richer part of the built environment), but then calling on the whole built environment to be designed by people with this "evolving body of knowledge." Like the book, which presents the good and bad of design and argues skillfully why everybody should care, this point reaches for the stars. As I type it here, though, it also comes off as a bit naive; reorienting architectural education seems to be an insurmountable task, especially when considering my education, which had some of that learning already but didn't incorporate it directly (enough, at least) into architectural studio, where so much effort is expended by students.

That said, many schools are heading in the right direction anyways, particularly through the flowering of design-build programs that expose students not only to construction but also actual clients. Although Goldhagen does not broach this aspect of architectural education (her book is more about arguments for making better environments than dealing with how that actually happens), it's hard to deny the impact of such projects as (to toot KSU's horn again) Design Make Studio's affordable housing at 7509 Pennsylvania Avenue in Kansas City, which capably balances architectural expression and experiential richness like so many other design-build projects around the country.

Of course, education does not stop at graduation, so there is no reason registered architects, like myself, cannot learn the necessary lessons about "environmental aesthetics and experiential design" in order to apply principles culled from neuroscience and other related fields to practice. Heck, why not make relevant information in this area a subset of the learning units architects need to maintain licensure? Architects need the depth of well-researched studies to better shape our lives, but clients need only pick up Goldhagen's book to be convinced the efforts are worthwhile.