This year, the 150th anniversary of Frank Lloyd Wright's birth, has yielded plenty of publications, exhibitions, and other events about the world's most famous modern architect. A few of them -- a book, an exhibition and a related symposium -- are centered at Columbia University, whose Avery Library co-owns the Wright archive with MoMA, which is exhibiting (until October 1) the must-see Frank Lloyd Wright at 150: Unpacking the Archive.

Wright's Writings: Reflections on Culture and Politics 1894-1959 by Kenneth Frampton
Columbia Books on Architecture and the City, 2017
Paperback, 144 pages 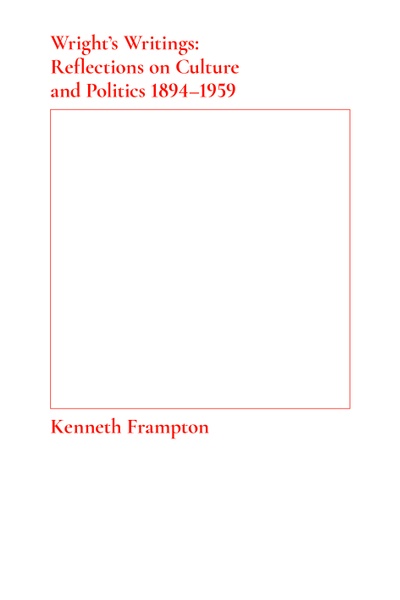 When MoMA curator and Columbia professor Barry Bergdoll gave comments during the opening of Frank Lloyd Wright at 150 when it opened back in June, one statement that stuck in my memory is that Wright is one of the few architects as well known outside academia as within. One side effect of this fact is that Wright has not been as large an influence in architectural education as Mies, Corbusier, Kahn, and other "modern masters." One scholar, though, who has not shied away from incorporating Wright into architectural history alongside these and other figures is Columbia professor Kenneth Frampton. Although to my knowledge he hasn't written a book exclusively about Wright, Frampton has included Wright in his own books and has contributed to books about the architect. One of the latter is the five-volume Frank Lloyd Wright Collected Writings put out by Rizzoli in the early 1990s. 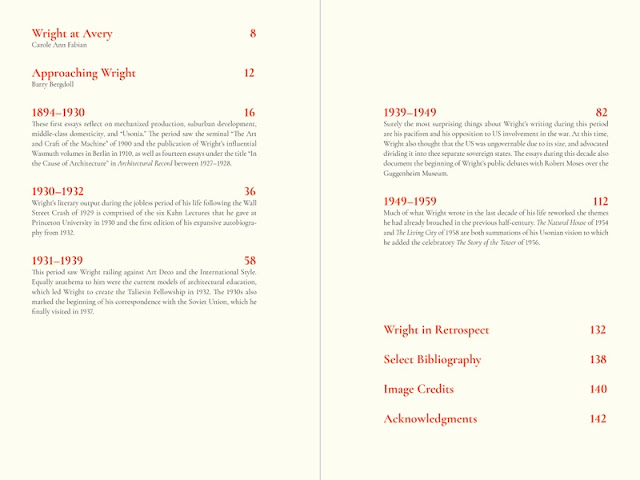 Columbia's Wright's Writings collects Frampton's five introductions to those books into a slim but very handsome book alongside illustrations culled from the extensive Avery/MoMA archive of Wright's drawings, manuscripts and other artifacts. Frampton's insights into the five periods of Wright's career and output in the form of writings work remarkably well together here even though they have been separated from the writings they initially introduced. Frampton's texts are one reason to buy the book, the other being the archival illustrations that accompany and are referenced in the text. These images -- marked-up manuscripts, handwritten pages, drawings for covers, etc. -- hint at the voluminous archive as well as the possibilities for scholarship in the years ahead. 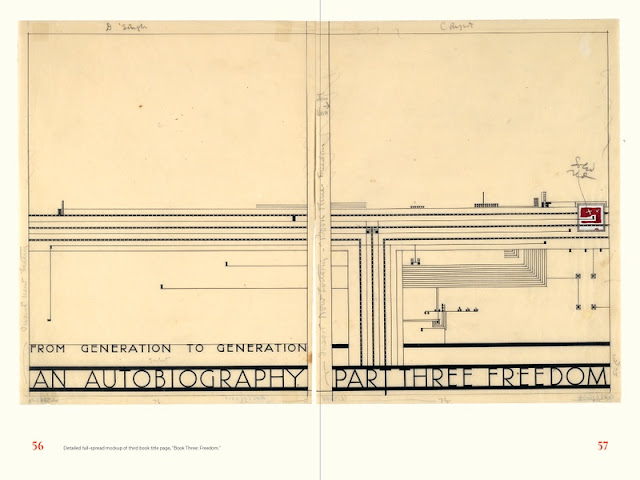 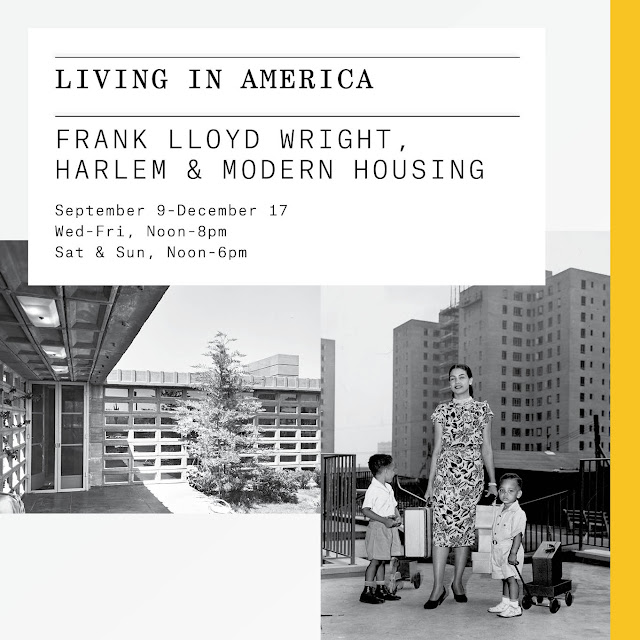 In addition to being the 150th anniversary of Frank Lloyd Wright's birth, 2017 is also the year when Columbia University opened the first two buildings in its large, ongoing Manhattanville Campus: the Jerome L. Greene Science Center and the Lenfest Center for the Arts, both designed by Renzo Piano Building Workshop. This timing makes the Living in America exhibition particularly fitting, even though it's not just about Wright. Since it's curated by Columbia GSAPP's Temple Hoyne Buell Center for the Study of American Architecture, rather than Barry Bergoll, for instance, the exhibition is about housing too. Under Reinhold Martin, the Buell Center's recent output has included House Housing, a multi-year research and exhibition program on architecture and housing, and the petit but loaded book, The Art of Inequality: Architecture, Housing, and Real Estate. Therefore Living in America is wrapped into the Buell Center's multi-pronged focus on housing and real estate. 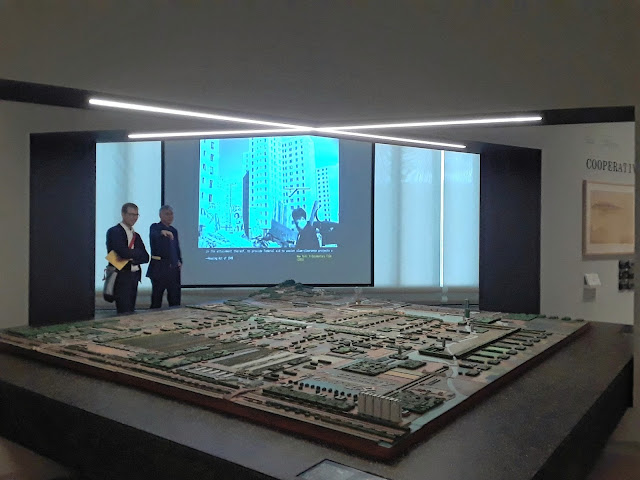 The exhibition presents a selection of Wright's post-Broadacre City residential designs from the Avery/MoMA archive alongside contemporaneous designs by other architects for large public and subsidized housing projects in urban areas. With so much Wright being exhibited and written about this year, I found myself drawn more to the other housing projects -- enough that I need to go back to take in more than an opening-night visit allowed. In the exhibition design by Project Projects and Leong Leong, the two "interwoven plotlines" are mounted on perimeter walls and two intersecting walls in the form of an "X" that split the rectangular Wallach Art Gallery into four triangular spaces, two obtuse and two acute. In the middle -- and clearly the focus of our attention from each gallery -- is Wright's huge and hugely famous Broadacre City model, what can be seen as another means of unpacking Wright's archive. In my visit to the exhibition during its opening, people gravitated toward the model; like me, they'd probably never seen the whole model in the flesh or in such an inviting manner (luckily I arrived early enough to get a couple cellphone photographs of the model not swamped by visitors). 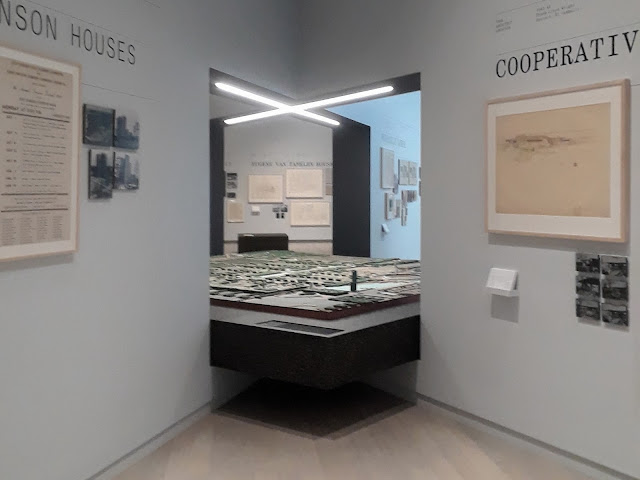 
The question of how to live in America preoccupied many architects and planners — from Frank Lloyd Wright to the consortium behind Harlem’s first public housing proposals — in the mid-twentieth century. This symposium gathers scholars of housing for a conversation that bridges what might otherwise seem like disparate realms of inquiry in order to reassess received histories and to provoke new questions about how we live in America, together, today.