A Library Lined with Books (Updated) 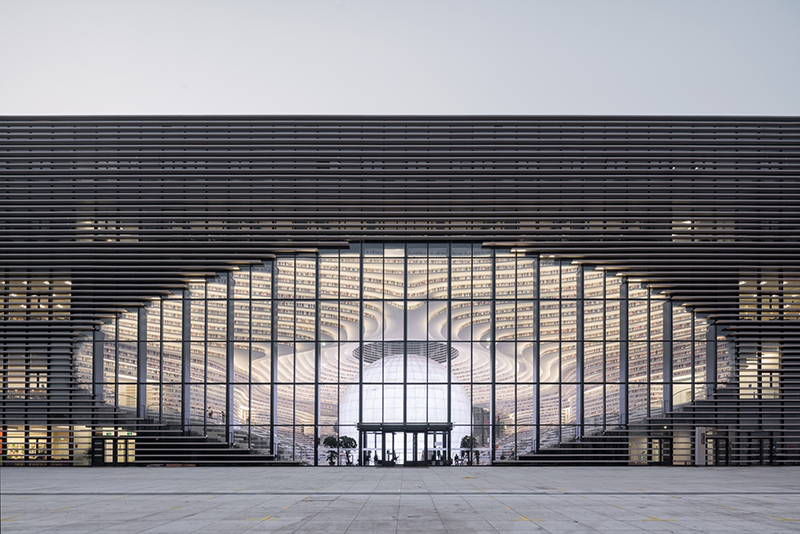 [All photographs by Ossip van Duivenbode]

As should be clear in just a quick glance, the sphere and cascade are bringing the library a fair amount of attention on the internet. As described by MVRDV, "The undulating bookshelf is the building’s main spatial device, and is used both to frame the space and to create stairs, seating, the layered ceiling and even louvers on the façade." 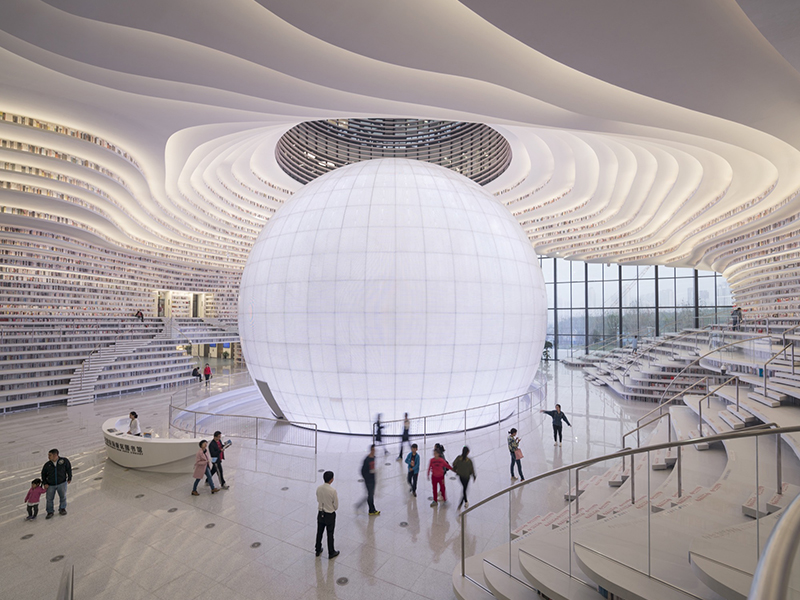 MVRDV's Winy Maas calls this space "cave-like, a continuous bookshelf" and "a new urban living room." Furthermore, "The bookshelves are great spaces to sit and at the same time allow for access to the upper floors. The angles and curves are meant to stimulate different uses of the space, such as reading, walking, meeting and discussing." 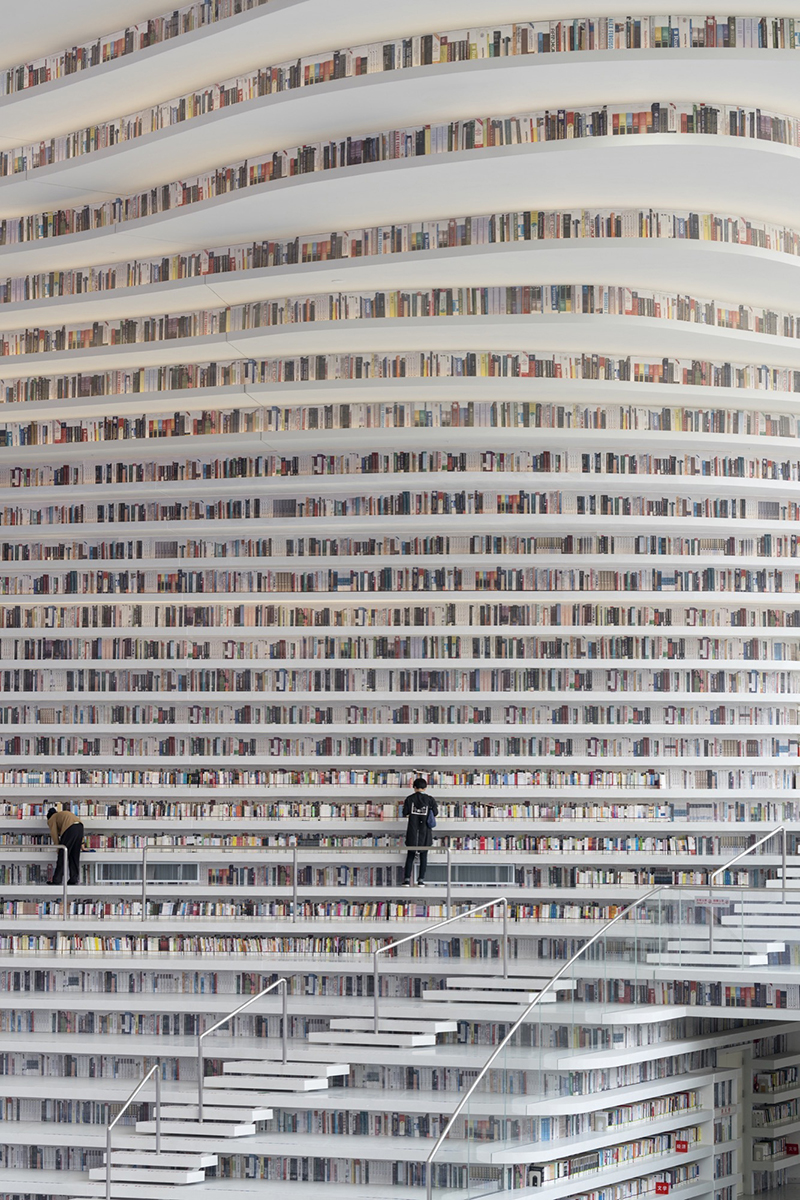 Here, I'm zooming into the above photo to point out a couple things: 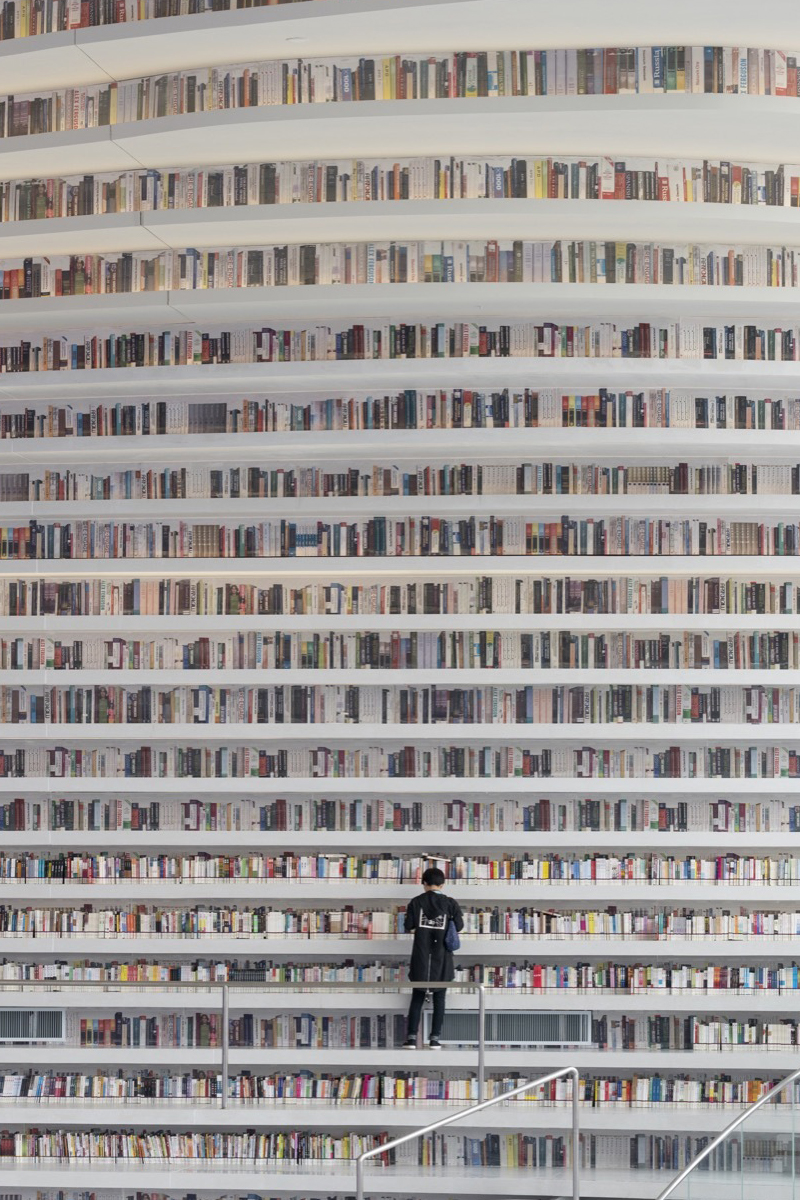 First, as might be obvious even from a distance, most of the books on the "continuous bookshelf" are images of books, not actual books. The difference between the two is clear in this close-up: the real books have library stickers at the base of each spine, while the book-images don't have that detail. Also, the latter looks flat in comparison. Ironically, if all of the real books went away, the cascade of books would still look full, since the book-images serve as a backdrop in the shelves with real books.

Second, and the main point of this post, is a question: is it a good idea to store books on the same surface that people walk upon? Although the person above is standing in an area where the books are only an image (due, I'm guessing, to the grilles at that level), the shelf below is clearly accessible; as are others above and below. With the photos portraying the building in its brand-new state, this doesn't appear to be an issue. But over time, as more and more people go to the Tianjin Binhai Library "to see and be seen," in Maas's words, the books will accumulate dirt from people walking by them. I hope the maintenance crew is up to the task.

That said, I love the idea of a central public space surrounded by books and knowledge – even if most of that knowledge is superficial image rather than text.

Update 11.21: A story in the Daily Mail from November 16 points out what I thought was obvious, that most of the books are wallcovering rather than real books, but it also sheds some light on the space's future: "'We can only use the hall for the purposes for which it has been approved, so we cannot use it as a place to put books,' Liu [Xiufeng, the library's deputy director] laughed, adding that they would likely soon have to remove all those temporarily on display." This is unfortunate, since it will turn the atrium into a place for gawking and taking selfies rather than for finding books, such as new titles or frequently checked-out books that aren't in the stacks elsewhere in the library.

But the space's future for selfies is also precarious, as the article further states: "The irregular white stairs have proven hazardous for selfie-snappers with eyes glued down to their phones or up at the stylish ceiling." An old lady slipped and hit her head hard; "'There was blood,' said one guard."
Email Post