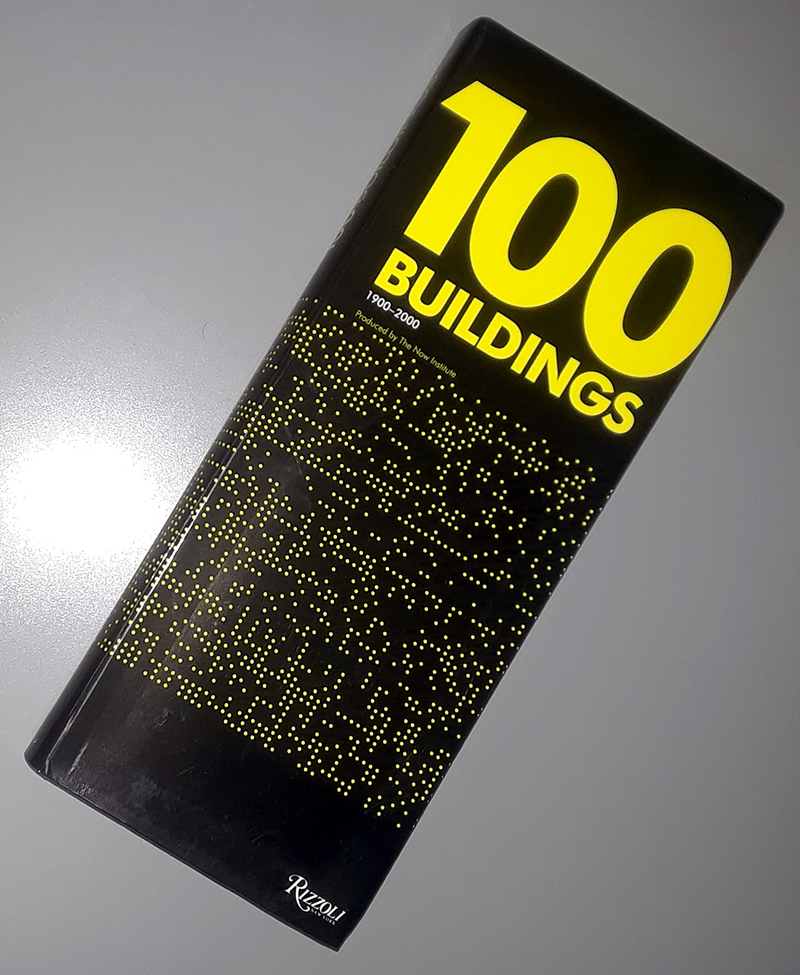 When visiting the page for 100 Buildings on Amazon today, the "What other items do customers buy after viewing this item?" section lists one book: mine. This isn't surprising, given that both have "100 Buildings" in their title and have been published in the last couple years. But like many architecture books that share some similarities, the differences are also interesting. 100 Years, 100 Buildings features one building per year for the last 100 years (1916-2015), while 100 Buildings limits itself to the 20th century. My book is a fairly subjective sampling of visitable buildings spanning a whole century, given the year-by-year format, while the "must know" buildings in the book by Thom Mayne and Eui-Sung Yi are free from such constraints, as long as they were designed and/or completed somewhere between 1900 and 2000.

In fact, dates are played down in the book relative to the who, what and where of the 100 buildings, so it's hard to get a comparative sense of when the buildings were completed. Nevertheless, I'd wager there are more buildings from the 1930s than 1940s, for instance and very few from the 1980s. This stems from the fact Mayne solicited more than 50 "internationally renowned architects" to create a list of important 20th-century buildings — selective crowdsourcing, if you will. The book then takes the top 100 selections and orders them from most to least mentions. A matrix at the back of the book (also on the cover) lists the 50 contributors (vertical axis) and the 100 buildings from the book (horizontal axis). As can be seen, everybody but Craig Hodgetts, MVRDV, Dominique Perrault and Richard Meier (really?!) selected Villa Savoye, number 1 on the list of 100. 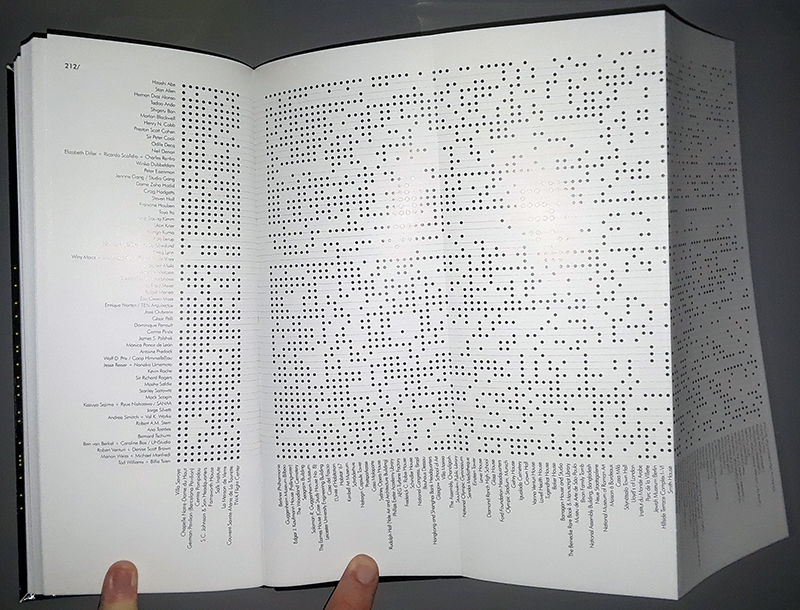 Each building is given one spread with a fairly consistent format, as the Villa Savoye spread below illustrates. There's one black-and-white (typically exterior) photograph, an axonometric, a floor plan, an elevation or section, a paragraph of text, and project data: name, architect, location, dates, and coordinates (N/S at the top edge, E/W at the right or left edge). In terms of the last item, coordinates, these come in handy for those knowledgable in entering them into Google Maps, but their location on the page is a missed opportunity. If they were switched (N/S on the right, E/W on the top) and located on the spread relative to a map, they would give a direct sense of where each building is located on the earth. Otherwise, a global map is found between the table of contents and first entry, but it only lists projects by country.

Of course, with only a spread per building, 100 Buildings cannot address everything such as this. It is a starting point, the book version of Wikipedia entries, compete with a list of references in the back of the book for further exploration. These references, though only 12 pages versus 200 pages for the main entries, are extremely important, considering that the book is aimed at students, at overcoming "a declining awareness of historical precedent," according to Mayne in his foreword. Some of this declining awareness will be overcome by the photos, drawings and paragraph of text about Villa Savoye, for instance, but Tim Benton's The Villas of Le Corbusier, the architect's own Towards a New Architecture, and Kenneth Frampton's Modern Architecture 1920-1945 will be more valuable in the long run. With this in mind, it's imperative that students using this book have ready access to a library well stocked with architecture books. 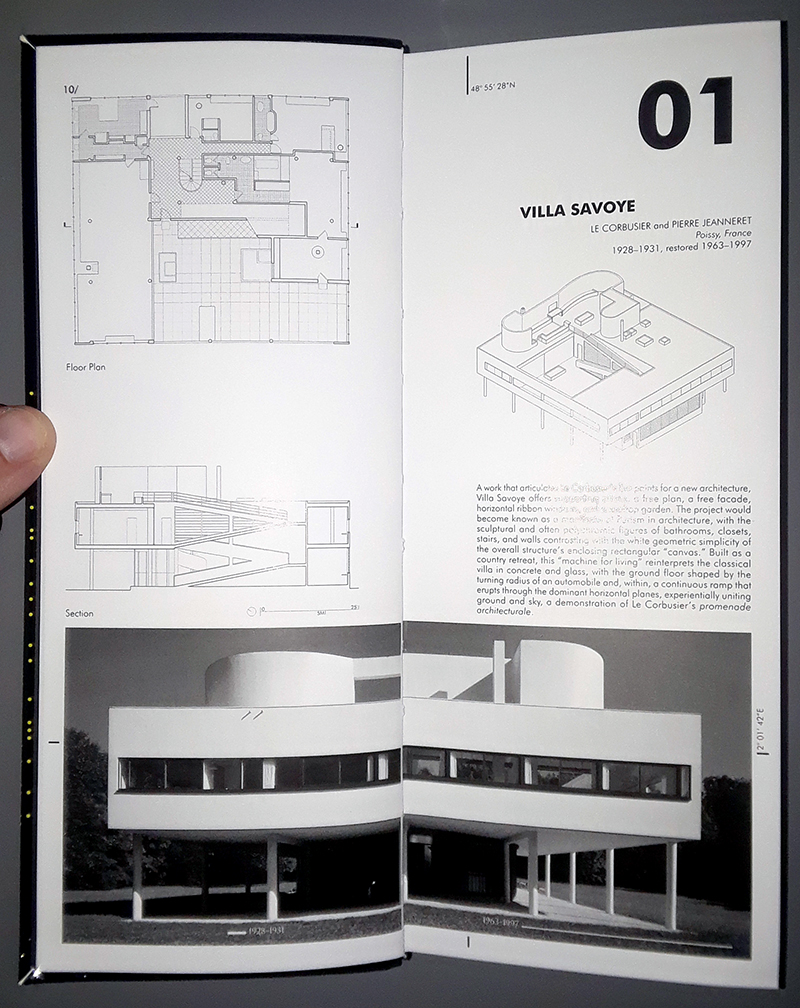 Returning to a comparison between Mayne's book and my own (something I never imagined I'd be doing, to be honest), there is plenty of overlap in the selections, even though my year-by-year, open-to-the-public format eliminated many buildings from appearing. Of the top ten 100 Buildings (in order: Villa Savoye, Chapelle Notre-Dame du Haut, Barcelona Pavilion, Centre Pompidou, S.C. Johnson & Son Headquarters, Farnsworth House, Salk Institute, La Maison de Verre, Couvent Sainte-Marie de la Tourette, and TWA Flight Center), seven of them are in my book – the top seven actually, with the others missing because they are not open to the public, are too similar to another design, and were in a state of limbo when I wrote my book, respectively.

So for somebody like me, there is little revealing in this book. But of course, this book was not made for somebody like me. It was written for who I was 25 years ago, when I was in architecture school but did not know what or who a Corbu or Mies was, much less how a plan and elevation corresponded to a building or photograph. So I would have loved a book like this to be around back then, a drafting table companion that would spark discussions with my professors and give me jumping-off points for learning about all the buildings that are worth learning about.