Book Review: Krueck + Sexton: From There to Here 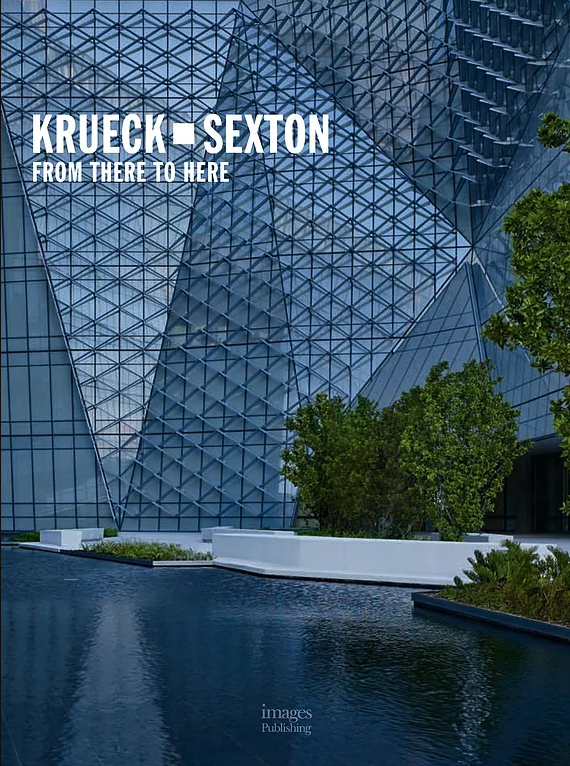 I'm not exactly sure when I first became aware of the work of Chicago's Krueck + Sexton (my best guess is seeing their competition entry for the American Library in Berlin in the early 1990s), but they were one of just a handful of firms I wanted to work for when I moved back to Chicago after architecture school in Kansas. Their built work at the time, mainly houses and interior residential projects in the city, exuded Miesian modernism – but with a twist. Although cognizant of, and trained in, Chicago's modernist history (Ron Krueck and Mark Sexton both attended IIT), they were not constrained by it. The over 20 projects covering nearly 40 years of work in this monograph are testament to the formal experimentation born from those Miesian roots.

The sizable book organizes the built and unbuilt works in four chapters – Crisscrosses, Interchanges, Shortcircuits, and Combines – that correspond to formal shapes: rectangles, curves, facets, and combinations of these three. Without strictly doing so, the order of these chapters works roughly chronologically, from the firm's breakout Steel and Glass House in Chicago (1981) to the South Florida Federal Building (2014). The first is all about rectangles ("the rectangle was sacred, so we decided to sever the [U-shaped plan] into three rectangles"), while the second combines faceted shapes and "sinuous warped planes." In between are primarily built works, though unbuilt works – such as the should-have-been-built Chicago Children's Museum in Grant Park – are included where form and surface are in synergy with the buildings.

Uniting the four chapters/formal techniques is one material: glass. This is hardly surprising, given the fact Krueck and Sexton are modern architects and glass is the most modern of materials. But in their hands, glass is never strictly a flat, transparent plane. It's clear that they are aware of the material's contradictions: clear and opaque, liquid and (then) solid, flat or bumpy, transparent or translucent. Consider a couple of their best projects: the Spertus Institute and Crown Fountain. For Spertus, the firm started with designs that mixed masonry and glass, in an effort to fit into its neighbors along the Michigan Avenue streetwall, but in the end they limited the facade to one material. The faceted glass skin calls attention to itself, reinforced by the frit pattern of small white dots that also cuts down on heat gain. Down Michigan Avenue a few blocks, their design for Jaume Plensa's rectilinear Crown Fountain masterfully stacks glass bricks without any apparent frame. Concealed behind the consistent wrapper is a hidden armature that maintains the purity of the external forms. In both of these projects, glass is the main expression – but as far a departure from Miesian tradition as is possible.

Other projects, such as their numerous apartment interiors and showrooms, combine glass with stainless steel, polished stone, and other surfaces in ways that are modern yet unexpected – kaleidoscopic in some cases. These and other qualities are conveyed in From There to Here through large color photographs on matte pages. With the firm's project texts put into narratives at the beginning of each chapter, the photos and accompanying drawings stand by themselves. They are the closest many readers will get to experiencing the projects firsthand. In this regard, the large size of the photos (pages are 10" x 12.5") are all the better for getting pulled into Krueck + Sexton's geometrical creations.