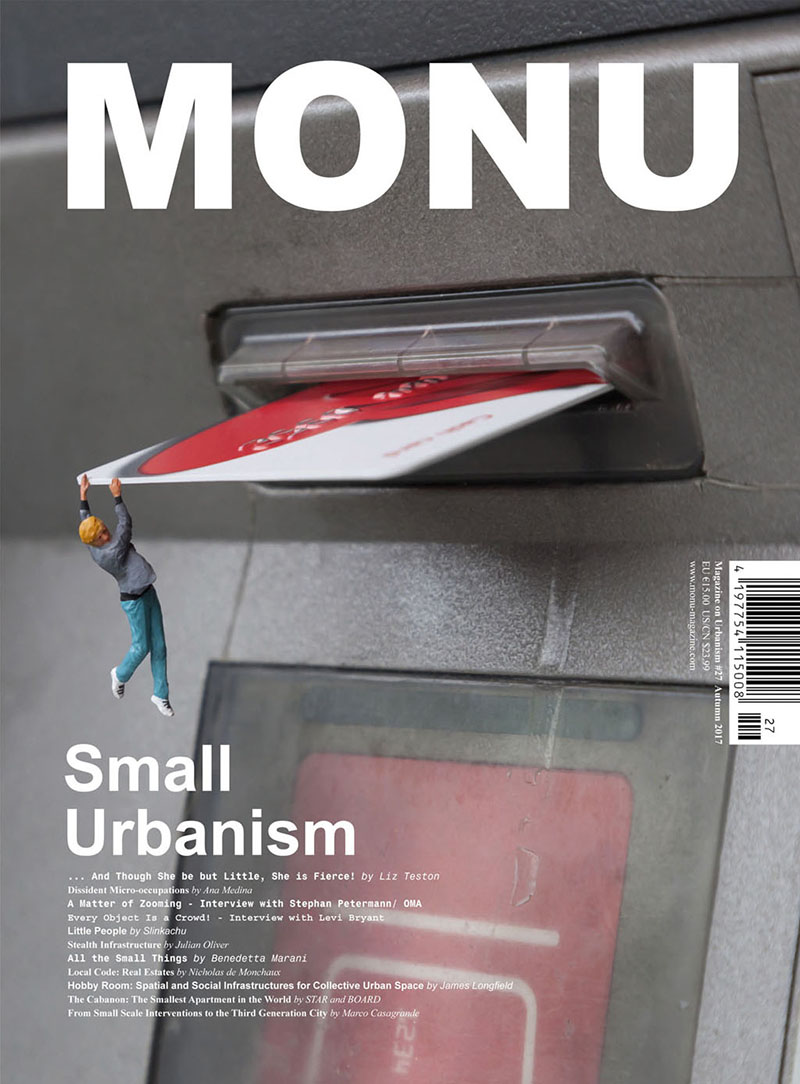 When reading MONU’s issue #27 on Small Urbanism, the exhibition Italy: The New Domestic Landscape, curated by Emilio Ambasz in 1972 at the Museum of Modern Art (MoMA) in New York, immediately came to my mind. The link between the two arose from the attention that both give to objects and small things, and their relationship to the bigger scale and the environment. This is why I want to talk about the new issue of MONU through a comparison that aims at showing the similarities between the magazine and the exhibition. 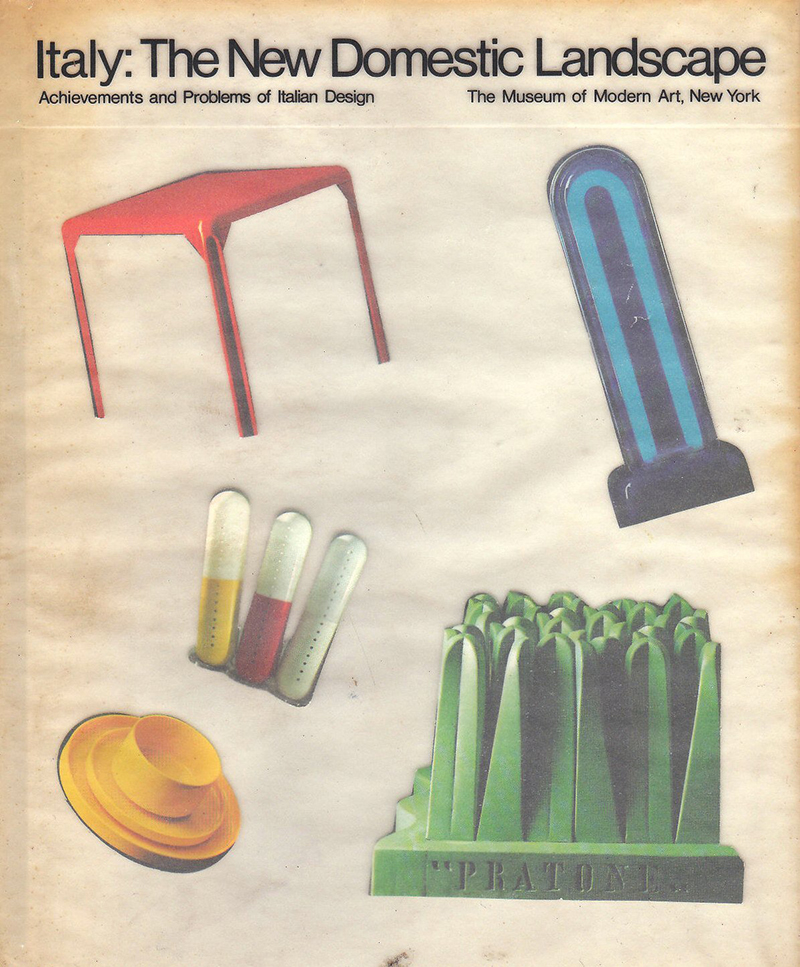 [Cover from the catalogue of Italy: The New Domestic Landscape, 1972]

First, a brief introduction of the exhibition is necessary to understand the importance of the objects in the case at hand, and consequently to appreciate the link with MONU. I found a statement by Ambasz particularly exhaustive in this regard: “When I started the exhibition I knew nothing about Italian design.” He admitted further, “I had read a few magazines and seen beautiful products, so I said we should have an exhibition. It was only when I got to Italy that it became evident to me that the designers were making objects, but thinking of environments.” To demonstrate this, Ambasz commissioned a series of prototype environments, installations that would reflect upon changing domestic living patterns within contemporary society, while also facilitating the exploratory use of new materials and multimedia technology.

Hence, MoMA’s show shifted the center of the discussion from production and technique to symbols and social critique, as it was encapsulated in the keywords with which Ambasz chose to define contemporary design: “landscape,” “environment,” “media,” “counter-design,” and “politics.” What emerged from the exhibition was the power of the small objects that became a cultural tool for contesting, reforming and acting on the city.

Moreover, the exhibition’s catalogue included a quote from the famous children's book The Little Prince by Antoine de Saint-Exupery, which reminds us how important it is to take responsibilities for our actions and also that every small thing has a responsibility itself. In the first page, we read:


“You become responsible, forever, for what you have domesticated.”
“What does that mean — 'domesticated'?”
“It is an act too often neglected. It means to establish bonds.”
“Please domesticate me,” said the fox.
“I want to, very much,” the little prince replied.
“But I have not much time. I have friends to discover, and a great many things to understand.”
“One only understands the things that one domesticates,” said the fox. “Men have no more time to understand anything. They buy things already made at the shops. But there is no shop anywhere where one can buy friendship, and so we have no friends any more. If you want a friend, domesticate me…”
“What must I do, to domesticate you?” asked the little prince.
“…One must observe the proper rites…” “What is a rite?” asked the little prince.
“Those are actions too often neglected,” said the fox. “They are what make one day different from other days, one hour from other hours.”

Contrary to convention, the objects in the Italy exhibition were displayed in the natural setting of MoMA’s sculpture garden, while the environments were shown within the institutional spaces of the museum’s galleries. This curatorial decision was an attempt to almost cancel any sense of hierarchy between exhibited objects and environments, and to focus rather on their interaction with visitors. 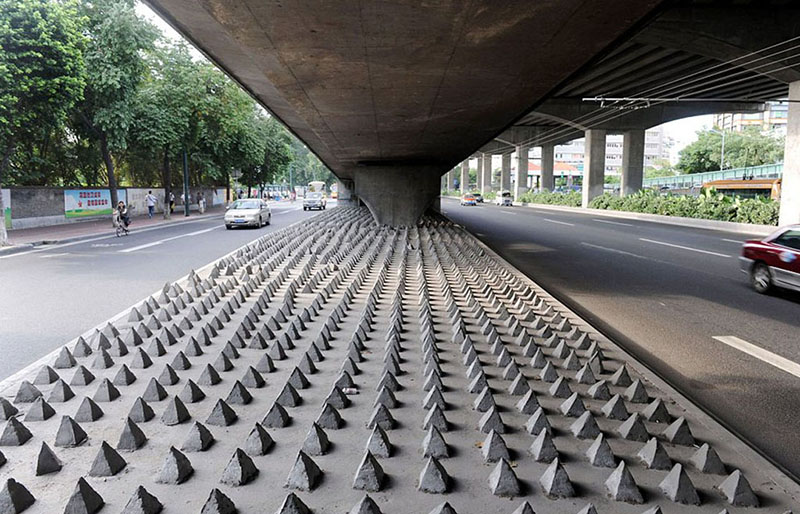 Also in MONU #27, some articles focused on the relationship between the small-scale objects and the environment. Indeed, “The Democracy of Objects” by the American philosopher Levi Bryants, talks about something similar. In an interview with Bernd Upmeyer, he says that “every object is a crowd!” As a result, we should not treat the smaller elements of an object as subordinated to the larger scale object. Instead, they are on equal footing. He also added that how we design things (even the smallest ones, like a toilet door, a bench, or an overpass for example) makes a real difference in our lives socially and politically, and we should be attentive in managing this kind of power because every small object has a significant function and we are responsible for it.

Such things regarding physical elements were central also in “A Matter of Zooming,” Bernd Upmeyer’s interview with Stephan Petermann from the Office for Metropolitan Architecture (OMA). The main focus of the interview is on OMA’s “Elements of Architecture” project at the 2014 Venice Biennale. In regards to Small Urbanism, I found the research on the door, the window, and the balcony extremely interesting — particularly the balcony. Petermann describes the balcony as the physical platform between the public and private realm, so it seems to be an incredibly powerful tool for urban politics. (These days we can also see Twitter as a balcony.)

Additionally, Petermann says that by focusing on these small elements it is possible to uncover the extremely complex interplay of technology, art, culture, economy and politics in great detail. Furthermore, the responsibility of these objects is to engage with a type of deeper understanding of the fundamentals of architecture and consequently of the fundamentals of urbanism. As Petermann declared, urbanism is not separate from elements because every element has an urbanistic consequence. 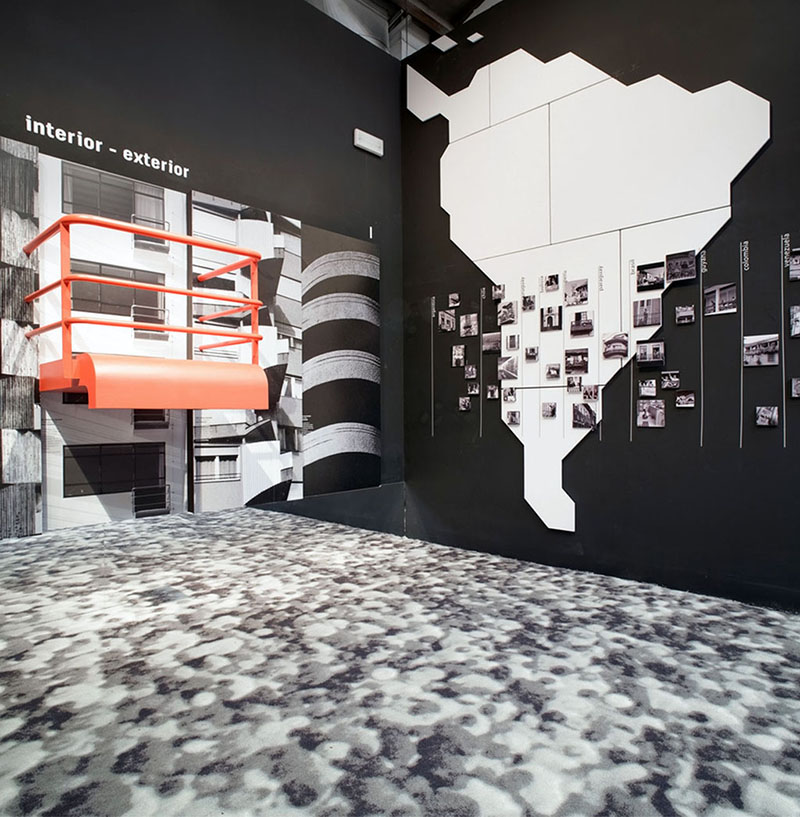 [The “Balcony” room from “Elements of Architecture” at the 2014 Venice Architecture Biennale | Photo: Giorgio de Vecchi]

Another relationship between MONU’s new issue and the MoMA exhibition can be found in the role played by small technologies. It is interesting to know that to accompany the installations at MoMA, each designer was asked to produce a film that would demonstrate their environment’s vulnerability. Together, the environments and films refined the potential for domestic spaces to fundamentally influence inhabitants’ thoughts and actions. Small technology tools can be very powerful and useful to, and responsible for, changing spaces and their understanding.

In the MONU article “All the small things,” Benedetta Marani tries to demonstrate the strength of the information and communication technologies within the city. Her essay shows how the web has become the new arena of discussion and has often been used as a channel for participatory processes for urban public spaces. These new discussion arenas have become responsible for small-scale interventions and have had the power to change the use of city spaces with a virtuous impact on the daily life in neighborhoods.

Furthermore, we can consider the MoMA exhibition as a small initial action itself, one that had a great echo in the following years and which still exerts an influence. Originally intended to travel to museums across the United States, the exhibition opened for a single summer in New York before being dismantled and returned to Italy. Yet, despite the brevity of its public presentation, the show became a benchmark for future architecture and design exhibitions. “It’s the great ‘myth’ of design curating,” explains Design Museum director Deyan Sudjic, “the show that my generation never saw, but thanks to the catalogue, and the title we regularly refer to it.” The catalogue of Italy: the New Domestic Landscape had a great impact in the following years both in Italian and American academic circles because it was the first book which attempted to chart the cultural complexity of an emerging design culture. 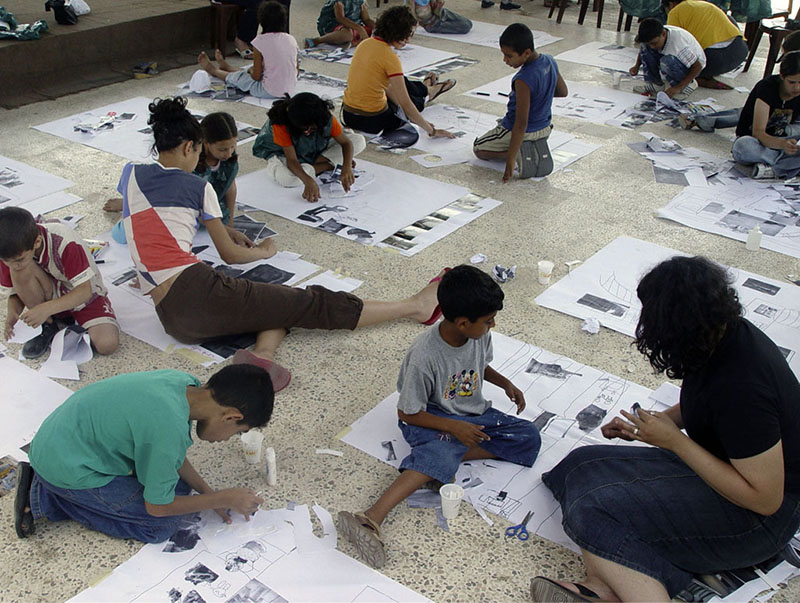 In MONU magazine’s new issue, I found a similar procedure related to “small initial actions” that can have a big impact on a larger scale. For example, in the article “Urbanism for Refugees,” Fabio Micocci shows how small tactical actions carried out in a refugee camp in Lebanon are helpful in establishing pilot projects that could devise new procedures for the future; reshaping and adapting urban design principles to the new context of the global movement of people. Micocci touches on a crucial issue: the “right to space,” or rather space as a process of re-appropriation. Re-appropriation in this case means actions of participation in a process that involves children and adults to ensure identification with and belonging to the space. On a larger scale, “Right to space” means “Right to the city” (Henri Lefebrve, 1968).

We can consider the right to the city as the right to change and reinvent the city according to our needs. Moreover, it is a collective rather than an individual right, since rebuilding the city inevitably depends on the exercise of a common power over the processes of urbanization. The freedom to build and rebuild cities and ourselves is one of the most precious human rights — yet it is also one of the most neglected. To claim the right to the city means to claim the power to give shape to the processes of urbanization, to the ways in which our cities are built and rebuilt, and to do it in a radical way — starting from the small things.

Claudia Consonni recently graduated from Politecnico di Milano. She also obtained a master in Architecture and Museography at Accademia Adrianea in Rome. During the past two years she has been collaborating as teaching assistant at the design studio held by Lorenzo Degli Esposti that is focused on urban planning and public spaces. Since 2017, she is a member of the research collective GruppoTorto.
Email Post
Labels: book-review monu