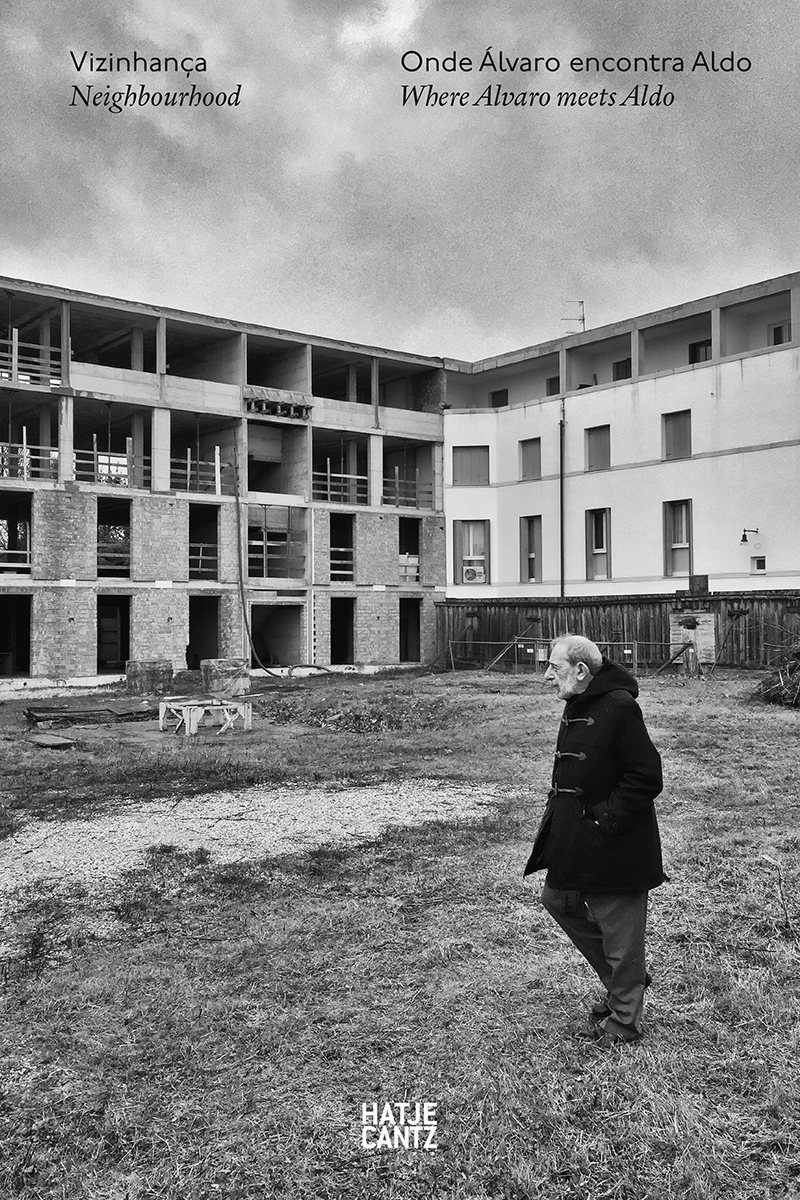 Of the many countries that participate in the Venice Architecture Biennale, Portugal is one of those that does not have a home in the Giardini. As such, it ventures out into the city for a venue – not necessarily a bad thing, since it spreads out the exhibition beyond the confines of the Giardini and Arsenale and further embeds the exhibition in the city. In 2016, Portugal's contribution to the Biennale was located on Giudecca, the long island that, outside of Palladio's Il Redentore, doesn't see as many tourists as the rest of Venice. Curators Nuno Grande and Roberto Cremascoli did this for a good reason though: they wanted to draw attention to an unfinished work by Alvaro Siza, Portugal's most famous modern architect. 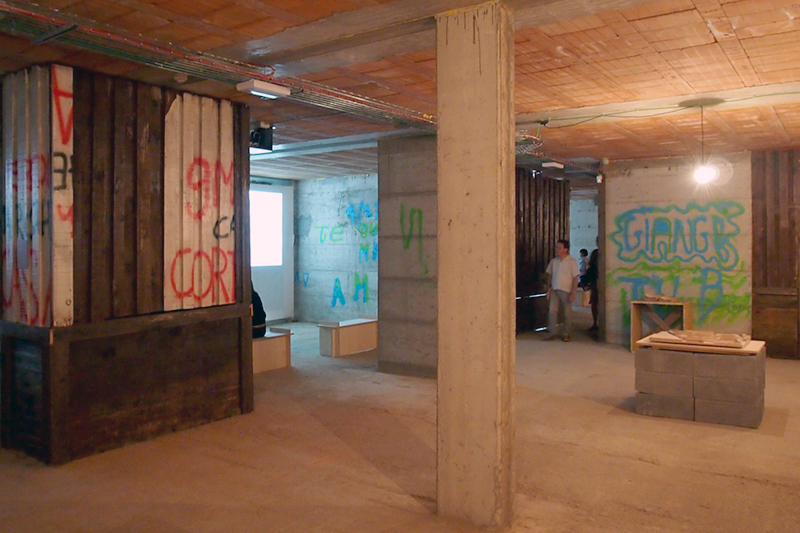 Neighbourhood: Where Alvaro meets Aldo occupied a portion (photo above) of Siza's competition-winning project for a residential development (the renovation of Campo di Marte) on Giudecca. Siza broke down the project into four parts and brought in three other architects (Carlo Aymonino, Rafael Moneo, and Aldo Rossi) to design other pieces. This happened in 1985, but only the designs of the two Italian architects were realized, making the meeting of Alvaro and Aldo, who died in 1997, a somewhat sad one. Well, not entirely, since the actions of Grande and Cremascoli led to the rejuvenation of Siza's building and the partial completion of it before the exhibition opened in May 2016. 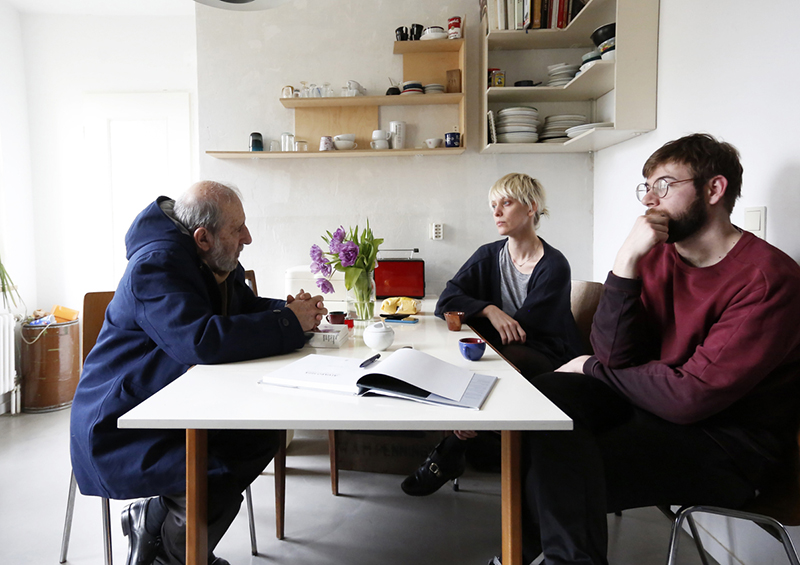 The exhibition and book of the same name go beyond the residential project in Venice to include projects in Berlin, the Hague, and Porto. All four cities are host to Siza projects, while all but Porto are home to Rossi residential buildings. Therefore the selection of cities/projects by Grande, who is from Portugal, and Cremascoli, who is from Italy, accentuates the relationship between the two architects who were born only two years apart. Unfortunately, but understandably given Rossi's premature death 21 years ago, the book is focused almost entirely on Siza (the same might have been the case with the exhibition, but I don't recall and my photos don't capture enough to elucidate things). This situation is further understandable given the format the curators adopted: following Siza on post-occupany-type visits (photo above) to all four of the residential projects. That said, it would have been great if Siza also visited residents of the Rossi projects to further bridge the work of the two architects. 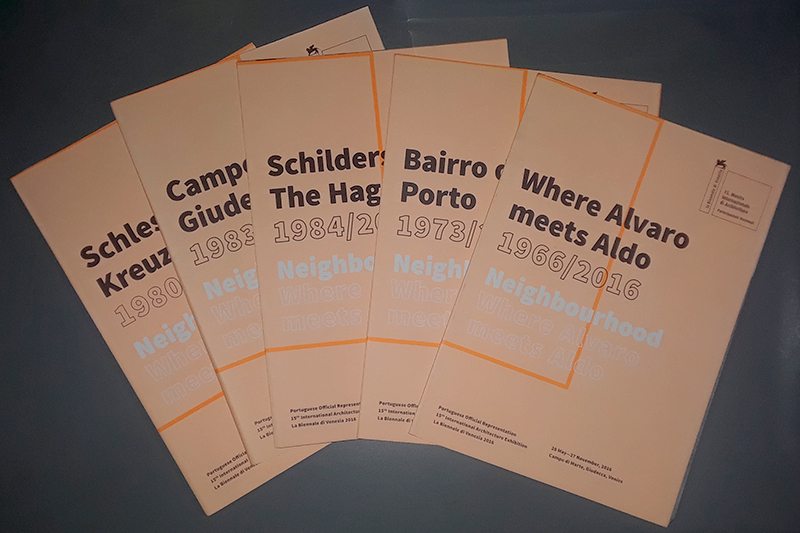 [My pamphlets from the Biennale exhibition]

The book is basically split up into five sections: "Where Alvaro meets Aldo" followed by the four projects/cities: Campo di Marte, Giudecca, Venice, 1983/2016; Schilderswijk, The Hague, 1984/2016; Schlesisches Tor, Kreuzberg, Berlin, 1980/2016; and Bouça, Porto, 1973/2016; followed by an essay by architect Vittorio Gregotti and a portfolio of photos and film stills on Siza's visits. Those who visited the exhibition, like me, and picked up the pamphlets (photo above) will not find much new; most of the essays and some of the images in the book can be found there. But, of course, the book shares the exhibitions with a wider audience – and does it in a handsome package that elevates the importance of the trips Siza made at the behest of Grande and Cremascoli.