Last week I happened upon and bought a first printing of the AIA Guide to New York City. Edited by Norval White and Elliot Willensky, the guide was first published in 1967/68 and has been updated four times since then. I include both 1967 and 1968, since the book's copyright indicates both years and various sources point to either 1967 or 1968. A "from the stacks" blog post at the New York Historical Society Museum & Library from October last year clears things up, revealing that the guide was created as a paperback for the AIA's annual meeting in NYC in 1967 and then printed the following year as a $6.95 hardback.

Whichever year is adopted, the book's 50th anniversary hasn't elicited much in the way of celebration. I'm not aware of anything outside of the Historical Society blog post. The most recent update to the guide was done in 2010, and even though the AIA Conference on Architecture is being held in NYC this year, I'm not aware of any plans for a sixth edition to coincide with it.

So this look at the first edition is a celebration of sorts of the AIA Guide's 50th birthday. It's based on a quick glance through the book, rather than a deep dive into how well it works, which wouldn't make sense all these decades later. That said, below are the things that stood out for me; things outside of the main entries, whose brevity and tone have remained stable over subsequent editions; things that didn't continue, that I'm aware of, with later editions. 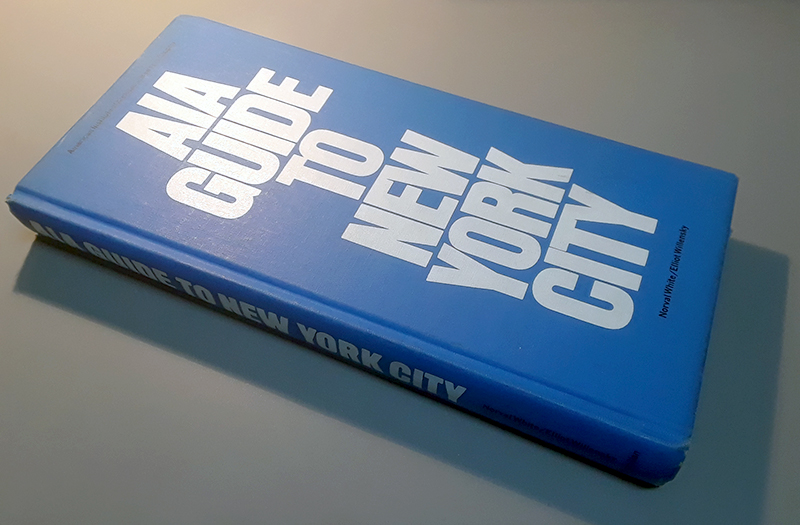 The combination of hardcover, lightweight pages, and only 464 pages make the book a nice object and one that is easier to hold than the 1,088 page fifth edition. I'm guessing the first printing had a dust jacket, but the copy I found is missing one. Nevertheless, the bold title on the cover and binding make it a handsome book even without a wrapper. 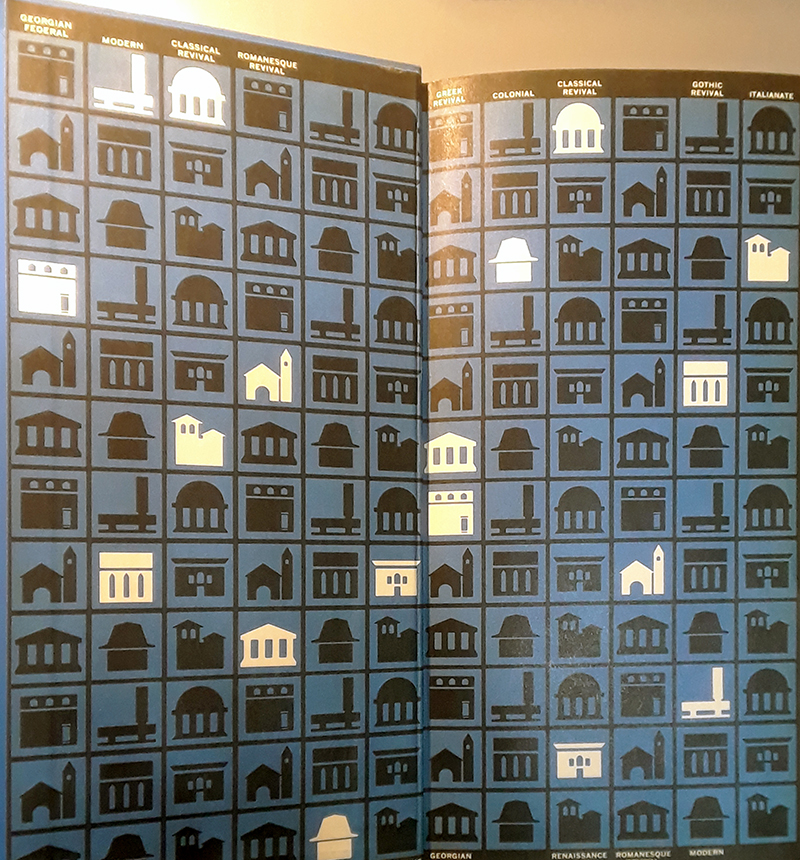 I'm not a fan of books that require readers to memorize around a bunch of icons, particularly when the key to their meaning is difficult to access. But put the key on the endpapers — and make some pleasing wallpaper in the process — and it works pretty well. 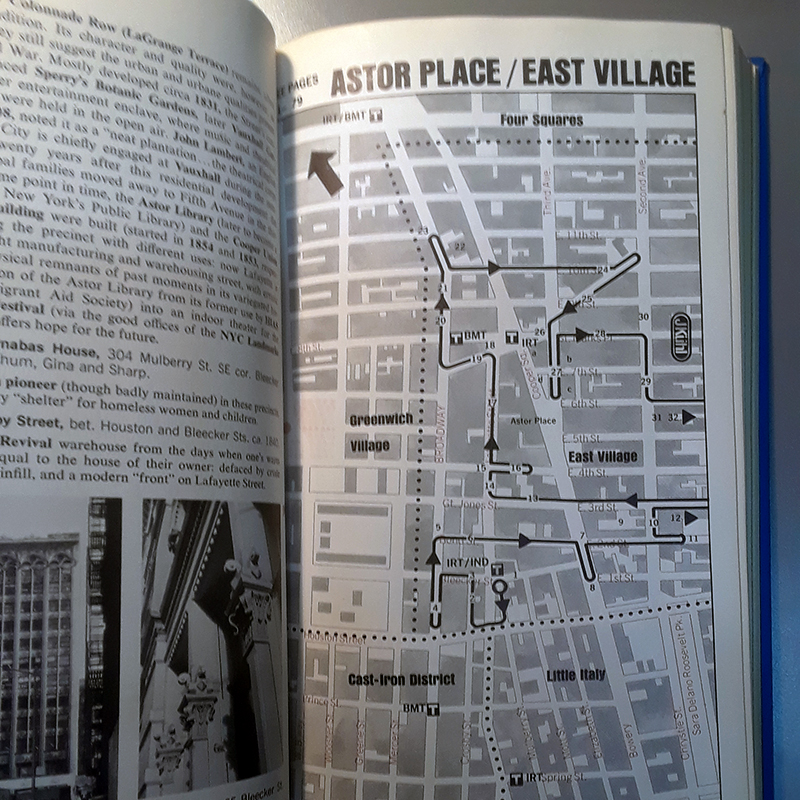 Later editions have walking tours within the chapters, but the maps aren't much help in navigating the routes. The maps in the first edition are very clear, with empty circles at the start, closed circles at the end, and arrows in between. 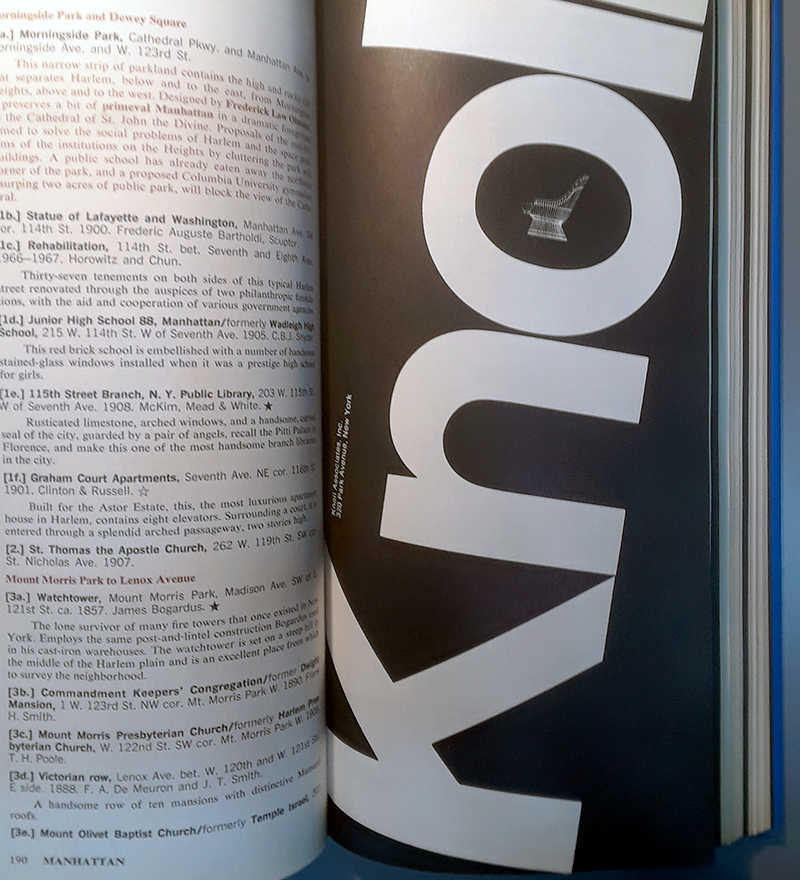 The first AIA Guide to New York City has sixteen sponsors with ads interspersed throughout the book. While they helped pay for the book's realization, I don't think they did anything to reduce the cover price — $6.95 is nearly $50 in today's dollars, or $10 more than the fifth edition's cover price. Nevertheless, the ads provide another snapshot of how things were in 1968. 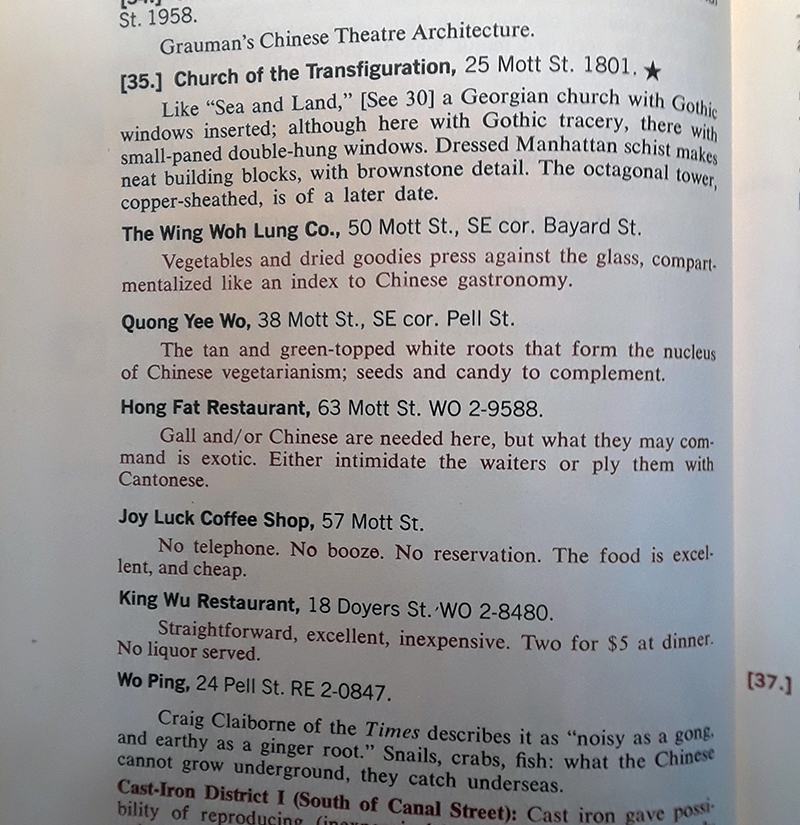 An odd touch, since the restaurants are not described in terms of design, but some of the descriptions are great. In Chinatown, head to Joy Luck Coffee Shop: "No telephone. No booze. No reservation. The food is excellent, and cheap." 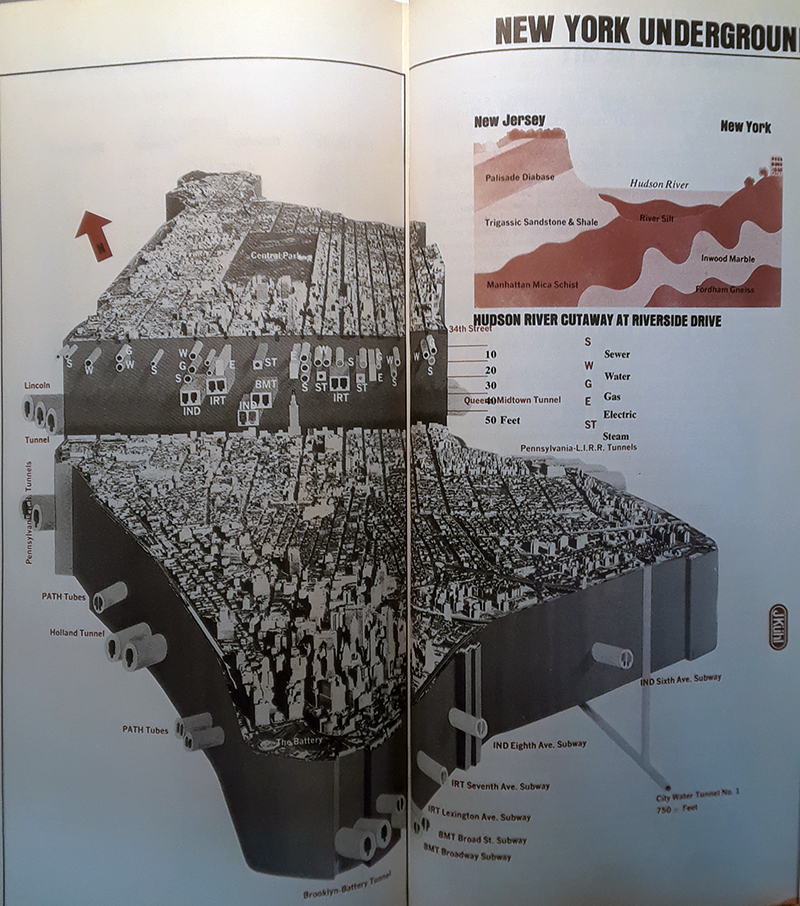 After 5 boroughs, 27 "sectors" and countless "precincts" (neighborhoods), the guide broadens to the scale of the city, with stats, descriptions, timelines, and illustrations (above) on its past and present. This part is a helpful addendum to the rest of the book, as is the index, which lists buildings by name and architect, but also has a style index and includes the walking tours.

It's easy to see why the above elements were dropped from later editions of the AIA Guide to New York City, but it's also great to see where it all started: the foundation for indispensable guides to the ever-changing city.
Email Post