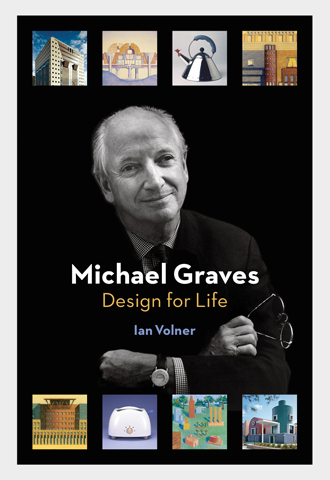 Ian Volner's biography on Graves did not start out as such. As he explains at the beginning of Design for Life, and recounted at a book talk at Rizzoli Bookstore in New York late last year, it was first "imagined as either an oral history or a memoir," eventually taking the latter form. But Graves died at the age of 80 in March 2015, not long after Princeton Architectural Press accepted Volner's book proposal. So the journalist had to switch gears, penning a slightly critical biography that is aimed at a general audience and benefits from his 40-odd hours of interviews with the late architect and conversations with many colleagues, contemporaries, and critics. I'll admit to not being very excited to read a bio on Graves; after all, I was trained to basically abhor Postmodernism. But Volner's writing – critical but also compassionate of his subject – swayed me, turning my disinterest into captivation.

In telling the story of an individual's life and work, biographies tend to be chronological affairs, a necessary fact that can push them toward becoming dry accounts on the order of "this happened, then that happened..." Yet Volner, who has a knack for writing great sentences (e.g., "[Graves's] soft-hued vision of the world – the cerulean blue that filled his paintings and graced the handle of his iconic Alessi teakettle – grew from a deeply ingrained feeling that to be humane was a fundamental artistic duty"), structured his book in a way that departs slightly from the norm. Most of it is chronological, if thematic, but the first chapter takes place in 2003, when Graves went from being able bodied to wheelchair-bound. This does not give anything away, since most people – at least those interested enough in the architect to read a biography on him – knew he got around for the last decade of his life in a wheelchair. But by diving head first into Graves's disability, one of many important instances in his life, Volner plants a seed that pulls the reader toward those later years detailed at the end of the book – through his education, travels, and early modern phase; through his transitional collage-like phase "when he wasn't sure what he was doing," in the words of Eric Owen Moss; and on to the fruitful decades of PoMo and product design he is best known for.

In one of my notes from Volner's talk at Rizzoli back in November, I (or he or somebody in the audience, I can't recall) wondered if Design for Life is the first biography of a postmodern architect. Is it? Probably. This is partly because Volner managed to actually get it done (he admits in the prologue that "from the moment he or she sits down to write, the biographer's goose is pretty well cooked"), but also because biographies on architects are a rarity (searching for "architects biographies" on Amazon yields such titles as Jefferson: Architect of American Liberty rather than actual biographies on architects). Sure, there are bios on Mies van der Rohe, Frank Lloyd Wright (including a short one by Volner), and Philip Johnson, but outside of those personalities only Paul Goldberger's 2015 bio on Frank Gehry comes to mind as another recent example. So instead of asking if this is the first biography on a PoMo architect, maybe the more important question to ask is, "Will this be the last?"