What Is Architecture? An Essay on Landscapes, Buildings, and Machines by Paul Shepheard
MIT Press, 1994
Paperback, 132 pages 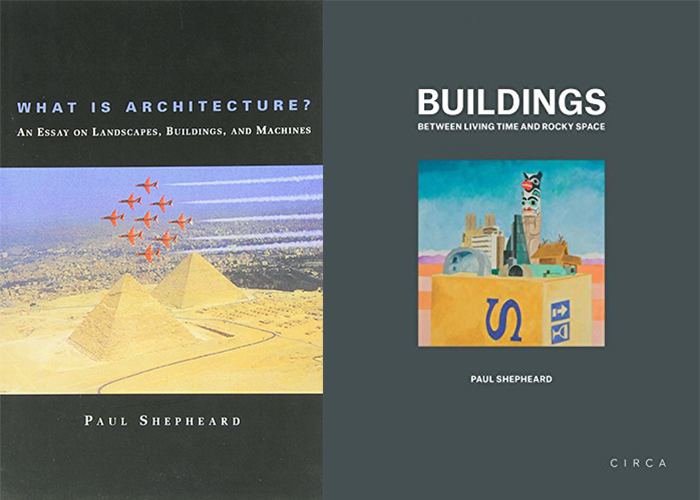 "There is a scale of things all to do with the land, at on end of which are the forces of nature, the perception of which, at any given place, I would call landscape. At the other end of the scale are the local difficulties solved, and the opportunities opened, by our use of machines — and somewhere in between are the buildings, which, if conceived grandly and accurately enough, can extend outward to embrace each end of the scale. Landscapes, buildings, and machines."

This quote falls on page 41 of What Is Architecture? and it serves as a decent encapsulation of the three subjects Paul Shepheard tackles in the popular book. The book came out in 1994, when I was in the middle of earning my architecture degree, and it became a popular text for discussion in classes, particularly before and after Shepheard gave a lecture at our school, an event I've referred to in the past. These three subjects — landscapes, buildings, machines — were not just fodder for his first book; they served as topics for three of his subsequent books: The Cultivated Wilderness" Or, What is Landscape? (MIT Press, 1997), Artificial Love: A Story of Machines and Architecture (MIT Press, 2003), and, most recently, Buildings: Between Living Time and Rocky Space. Although I've yet to read the middle two books, these four books could be seen as one work: the first an exposition of the three subjects and each of the following delving into the subjects deeper. But with Shepheard, things are not exactly what they seem. So a clear framework or distinction between the books such as this belies their complexity and the enjoyable nature of Shepheard's writing and his enlightening points of view.

The question posed by his first book points to it being an introductory textbook or something that gives laypeople a handle on an important profession. While What Is Architecture? could (and should) be read by those camps, it came at a time when architecture was grappling with an identity crisis of sorts, theorizing itself through such areas as literary criticism. Shepheard therefore aims to define the limits of architecture, even as he opens it beyond the design of buildings. Ironically, he departs from just about every convention of architectural writing in the way he argues those limits, resulting in a book that is refreshing and revealing. The author speaks sometimes in first person, something that many works of architectural theory shy away from, while the stories he tells blend history, fiction, and observation — a unique melange that really doesn't need any more boasting nearly 25 years later.

Much of the same can be said about Buildings, which Shepheard admits in the Prologue to being "not analytical, but descriptive" and "not about architects and architecture but about buildings." This isn't to say Shepheard doesn't delve into landscape and machines; his approach to thinking about architecture weds the three together. A case in point is the chapter "Mathematics," one of six chapters in the book's second part, which makes up most of the book and involves "six motives that drive the action of building." (The others are "Mimetica," "Money," "Majority," "Making" and "Military.") He discusses mathematics through a narrative with two characters (Geek and Fanny), who look at the stars, visit Stonehenge, and end up working (Geek, at least) at CERN in Switzerland. There are landscapes, buildings, and machines, tied together through numbers and angles — well, almost tied together. Shepheard's exploration reveals how mathematics can't quite serve as a universal model of the reality inside and around us.

What Is Architecture? is a book to be read cover to cover, such is the way Shepheard builds up his argument throughout the book. But Buildings is a book that can be read in this manner or delved into here and there. I took the latter route, finding topics and buildings portraits (one per chapter) that were of interest and then jumping around the book in roughly descending order of interest. The compact stories work well for this approach, eschewing any grand linear narrative in favor of illustrative vignettes to ponder after reading. Nevertheless, the book's Epilogue offers some concluding thoughts, some mildly optimistic ways of moving forward.