Although I've lived in Astoria, Queens, for twelve years and worked in nearby Long Island City for a few years, I'd never been to Brooklyn Grange until earlier this month. Although the name points to that hipper borough to the south, the Grange's first rooftop farm is located in Queens, specifically on Northern Boulevard, a car-oriented thoroughfare that leads to and from the Queensboro Bridge. I work on Northern Boulevard and frequent the coffee shop in the base of the building where the Grange has its one-acre farm. Faced with a cold- or allergy-related sore throat that wouldn't go away, I headed to the Grange on one of its open Saturdays in June to buy some honey – what turned out to be the most delicious honey I've ever eaten. 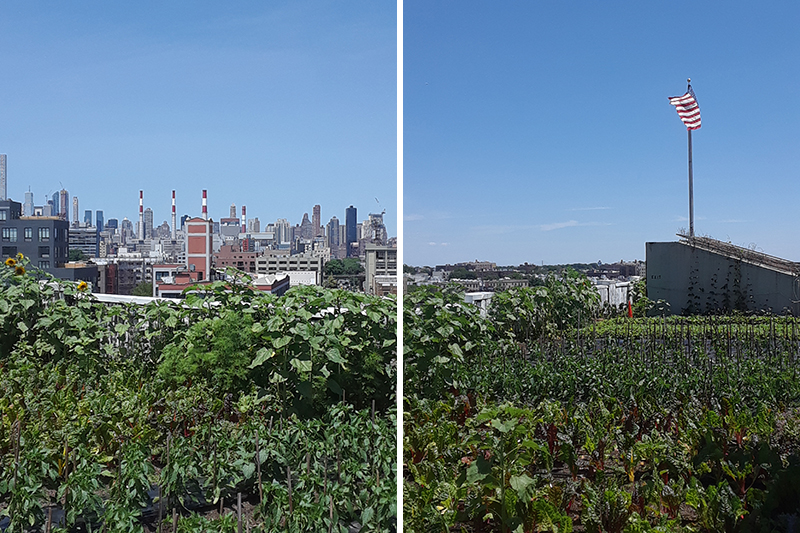 [Photos from my visit to the Brooklyn Grange]

I'm bringing up Brooklyn Grange here, in the context of AB's Food issue, because it is a trailblazer of sorts, at least in regards to urban farming in New York City. Created eight years ago as "the largest soil rooftop farm in the world," the Grange bested itself a few years later when it built a 1.5-acre rooftop farm in the Brooklyn Navy Yard. Although the farms are for most people out of sight, and therefore out of mind, they are part of the commendable trend of covering flat roofs in cities with green roofs. But of course they go one better and make the rooftops productive. Seen in terms of urban planning, urban farms point to the temporary use of large vacant lots, the potential reuse of big-box stores in suburbs, and the preservation of old industrial buildings in cities; all with the eye of having large enough footprints for cultivation (one acre is certainly a decent size, what I recall from writing about Chicago's Mobile City Farmstead years ago). In this sense, food and architecture are wed strongly together, though of course this is not the only way they relate to each other.

Architecture Boston's summer 2018 issue explores food in many ways – "from measured rituals to decorated spaces to ingenuity of form," as it attests. One section, "Assemble the Ingredients," tackles how "food is changing the way we plan and use urban spaces," be it with rooftop farms, urban beekeeping, "beer urbanism," or other means of local food consumption. The issue has articles on the design of the spaces where we eat (e.g. Four Seasons, RIP), but also one architect-turned-pastry chef that even I couldn't resist: Dinara Kasko. Not only do her creations look tectonic, they are designed using the same 3D software that architects and architecture students use. In the process she has fused the realms of architecture and food to create unexpected yet elegant desserts that I hope taste as good as they look.
Email Post