Every time I fly — which amounts to three or four round trips per year — I think about how much fuel planes use to transport people and/or goods from one place to another. Combined with the fact that one plane takes off somewhere in the world once every second, I can only shake the thought out of my head lest I get paralyzed by in considering how many gallons of carbon being spewed continuously into the atmosphere. Ditto when I eat a banana — which happens most days of the week — and the thought of huge cargo ships bringing my breakfast from South America all the way to New York City. 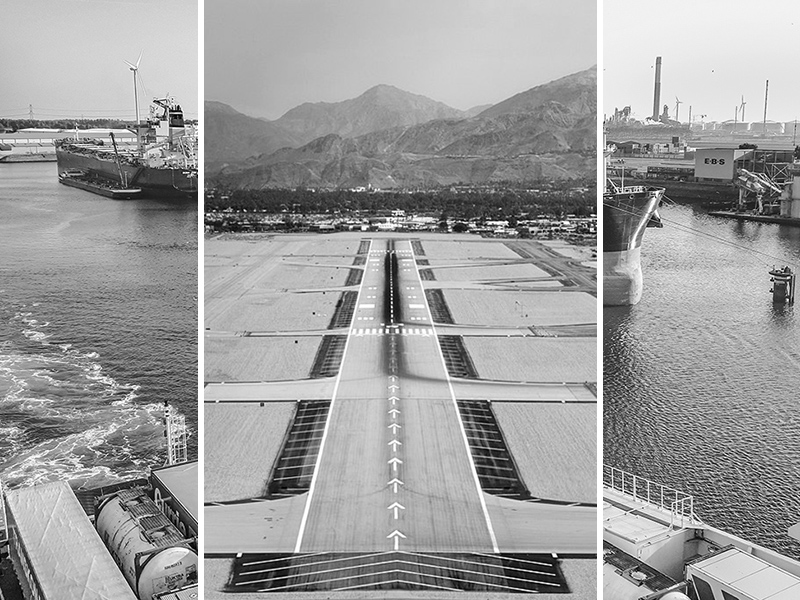 At least I know I'm not alone. The Architectural League is putting on two "Transportation: Connection and its costs" discussions this week as part of its The Five Thousand Pound Life initiative. Both events are moderated by designer Jesse LeCavalier (author of The Rule of Logistics) and sociologist Daniel Aldana Cohen. Below are details on the two discussions.


The development of air travel has been a primary contributor to globalization by collapsing distance and time. Since the mid-twentieth century, demand has consistently grown as flying has come to be perceived as a right of modern society. Global economies rely on transferring people, goods, and ideas with rapid speed, but what are the environmental costs of air travel?

Modern aviation is propelled by fossil fuel, consuming 5 million barrels of oil a day. The industry contributes to 2.5% of total carbon emissions and could rise to 22% by 2050 as other sectors emit less. Although aircraft are becoming more fuel-efficient and some airlines have introduced carbon offset programs, there is currently no green way to fly 8 million people a day.

As part of The Five Thousand Pound Life: Transportation series, this session will explore the future of air travel in the context of climate change. Experts in climate science, the global tourism economy, and airport design will share their work and ideas on what the possibilities are for personal and business travel with a radical reduction in greenhouse gases.


Although generally hidden from consumers, international maritime transport is the backbone of the globalized economy and accounts for approximately 2.2% of the world’s CO2 emissions. Despite its significant carbon output, international shipping and aviation emissions are not addressed by global climate-change agreements including the Paris Agreement. Greenhouse gas emissions from shipping are increasing despite improvements in operational efficiency for many ship classes and increasing emissions are being driven by rising demand for shipping and the associated consumption of fossil fuels.

The industry is likely to be affected by wide-ranging and potentially devastating climate change impacts associated with rising sea levels and increased frequency/intensity of extreme weather events. Shipping policies must be applied worldwide to be effective, and the International Maritime Organization (IMO), which regulates international shipping, is engaging — slowly. Last month member countries agreed to reduce greenhouse gas emissions by 50% by 2050, but some members believe it’s not enough to combat climate change in smaller island nations.

This session will analyze how the shipping industry impacts and will be impacted by climate change as well as where architects—and consumers – can accelerate innovation and change.


Tickets for both events can be purchased via the event links above.
Email Post